We’re off and running with our 2017 holiday gift guides and what better way to start than with something near and dear to our hearts – games. This guide is the first in a two-part series featuring games that are ideal for family gaming. The themes, complexities and number of players varies but one thing is certain: they’re created by quality, reputable companies!

Some of these games are currently available while others are in a pre-order status. Games make fantastic gifts for people of all ages, interests and abilities so if something catches your eye, it’s worth researching. If you see the

logo, click on it to be directed to an in-depth review. If you don’t see it and would like to know more, leave a comment asking for more details.

Over the coming weeks, we’ll provide a variety of gift ideas including games, toys, home and electronics. So stay tuned and happy shopping! Need more family game idea? Part 2 of our 2017 Family Games list is here! 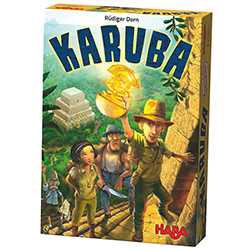 An addictive tile-based puzzle game for 2-4 treasure hunters ages 8-99. Game length: about 40 minutes. Simple to learn, while giving the player plenty of important decisions to make along the way. Premise: A team of adventurers gets dropped off on the beach of a mysterious island and set off through the jungle to hunt for treasure, their ultimate goal being to ransack ancient temples.

In New York Slice, each player slices pizzas into portions, giving your opponents first choice, with you getting the leftovers. There are a dozen kinds of pizza to work with, from Veggie to Hawaiian to Meat Lover’s, and each player decides if they want to eat or keep some of the slices, building the best collection of pizzas possible! 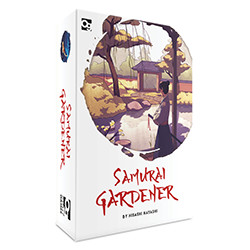 Samurai Gardener is a quick, fun game of snatching the best cards as fast as you can, then carefully deciding how to add them to your garden.

Frogriders is a tactical family game in which you collect the custom-molded plastic figures by making them leap over one another. Each of the collected Frog riders can be kept for scoring or returned to use its special ability. Due to the many different privilege cards and several scoring cards (of which only a few are used each game), there are a lot of tactical nuances to discover, and many strategies to employ to win at Frogriders!. 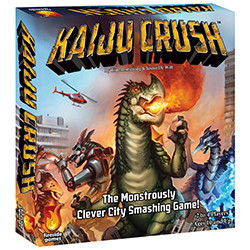 In Kaiju Crush, you play as one of 2 to 4 giant monsters smashing a city and battling for supremacy. Move your Monster to a City Tile and crush it for points, then drop one of your Territory Markers in its place. Fight other Monsters for more points and keep an eye on the Objective Cards to boost your score. Each Monster has Special Abilities that change every game. Who will be the mightiest Monster?

Entropy: Worlds Collide is a competitive card game of risk, deception and action management for 2 to 5 players. Multiple parallel worlds have collided and you play as one of six characters jettisoned from their world into a place called the Nexus. Through the use of unique character abilities and special actions, players must find shards of their reality and be the first to piece them back together in order to save their world and return home. 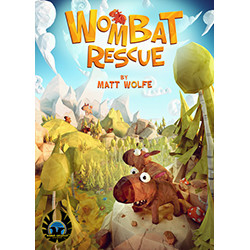 Did you know that wombats poop cubes? It’s true! Scientists theorize that, due to extremely poor vision but an excellent sense of smell, wombats use their poop cubes as “smell markers” to help them navigate their environment. You play as the mama wombat of your tribe. The dastardly dingo has stormed your burrow and chased away 4 of your baby wombats! You will need to eat and digest food in order to produce poop cubes, with which you will build smell areas so you can navigate your environment, find your baby wombats, and bring them home. The player who best plans their smell areas and moves most efficiently will prove victorious! 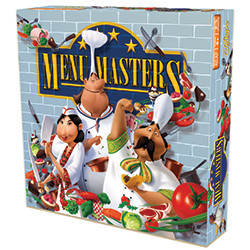 You are a world class chef, but the only way to become the Menu Master is to beat other chefs to the freshest ingredients! You may choose to open a shop to earn money or grab your shopping basket and be first in line at the market. But beware of other chefs as they drive up demand and increase prices! Earn your stars in this deliciously fun race to gourmet supremacy. 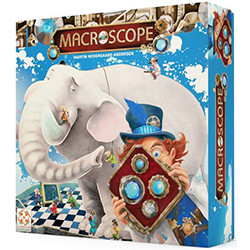 You’ve never seen a device like this! Peek through this curious contraption’s round holes at the image hidden inside. Can you tell a rhino from a pizza just from a few swirling lines? Take a good look at the partially revealed image, guess what it could be and score points if you are right! The fewer holes you need to open in order to recognize the image, the more points you get. The most perceptive player wins the game! 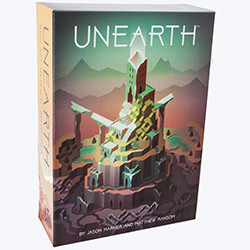 Long ago, your ancestors built great cities across the world. Now your tribe of Delvers must explore forests, deserts, islands, caverns, and mountains to find these lost cities. Claim the ruins, build places of power, and restore the glory of a bygone age.

Unearth is a dice placement game for 2-4 players from the makers of the hit game, Boss Monster. Unearth is easy to learn, but full of surprises that will engage gamers at all levels. 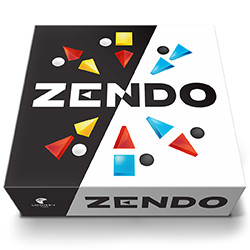 Zendo is an inductive logic game in which beautiful crystalline pieces are used to build structures marked by the Moderator according to a secret rule selected from a versatile deck of options. By observing the patterns and testing their guesses, players narrow down the possibilities until someone is able to guess the rule! Easy to adapt for cooperative play, it’s also a remarkably good model of the scientific method! 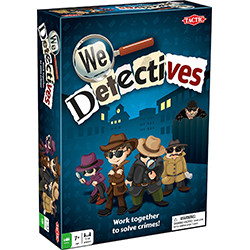 Tactic introduces a co-operative game play strategy in a cool crime solving theme game. We Detectives has players working together to gather evidence, explore, and use deductive reasoning to solve crimes. Each player moves his or her playing piece around the city setting on the game board as they try to solve the case before the time runs out and the bad guys get away. As part of the game, Tactic also added an element of surprise with some hazard discs that create even more fun and suspense throughout the game play.

Monkeys Up™, the 2017 Game of the Year by Creative Child Magazine, is the game that will have you going bananas! Players compete to get the best score by flipping, switching, and stealing monkeys. Each monkey has a value hidden under its feet that is only revealed when flipped. Victory will come to the player who switches, steals, and flips the best. You will find yourself laughing head over heels until all of your monkeys are up! 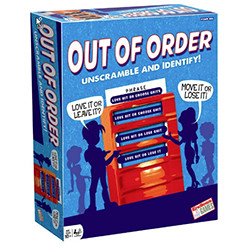 Have you heard the hit song “WES WILL COOK JOE”? Or seen the classic movie “YOUR WRIST PUMP”? What? You mean you don’t know them? That’s because they’re OUT OF ORDER! Take away a letter here, add a letter there and in 5 steps the correct answer is revealed! Clues are read one at a time. Be the first to unscramble and identify the OUT OF ORDER title to win! 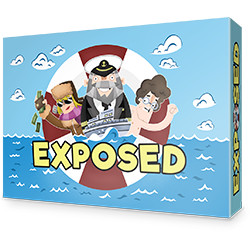 Exposed is a game of deduction and pickpocketry. You move secretly around the board, stealthily stealing as many wallets as you can from unsuspecting guests and exposing your opponents as the thieves they are. Your actions are limited by your current location on the board so each move may give away information about where you are. Steal cautiously, my friends!

Furriarty is terrorizing London and it is up to Purrrlock Holmes to stop him before he completes his plans and escapes! However, Purrrlock cannot do it alone and it is up to you, as a newly inducted Inspector at Scotland Pound, to bust members of Furriarty’s gang in order to help Purrrlock get closer to the bewhiskered baddie that’s been bullying all of Baker Street. Get ready Inspector, the game is officially afoot (or a-paw, if you will).

We truly believe that gaming as a family offers more benefits than merely being an offline source of entertainment. If you think the theme of one of these sounds interesting, look for the tiny

logo on titles that we’ve previously given a full preview. Be sure to keep an eye out for many of these items to show up in our 150+ Days of Giveaways. 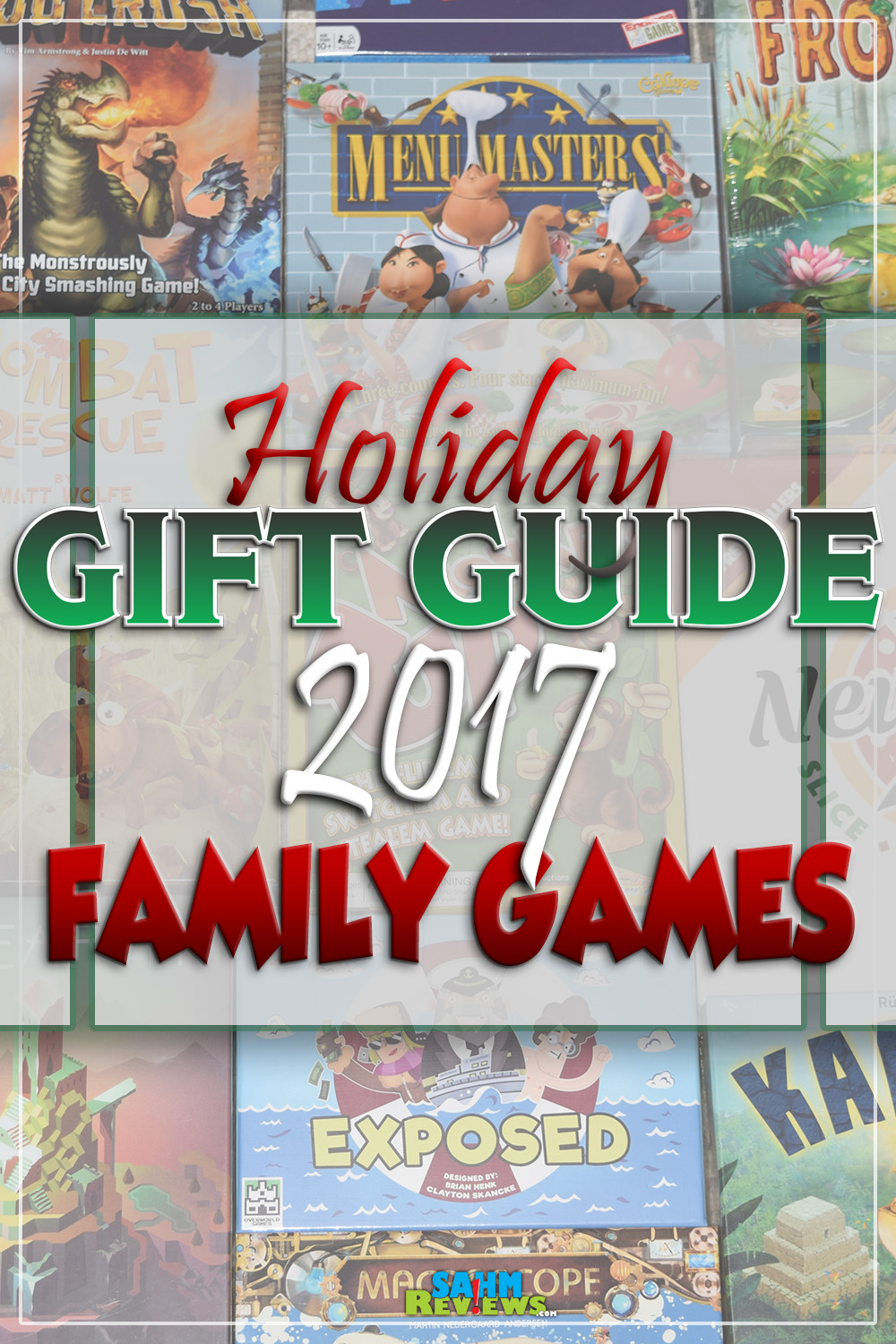