As a mom, it’s my job to teach my kids important lessons in life. Things like: Be kind to others. Be respectful to adults. Don’t make promises you can’t keep. Don’t judge a book by its cover.

Oh, that last one. Someone who shall remain nameless needs to work on that. I preach that the girls need to refrain from judgement about people as well as things. They didn’t know they liked salmon sushi until they tried it. Or fudge. I had to coax my kids to try fudge. I’m not joking nor exaggerating either! Yet last year during Gen Con I stopped by and introduced myself to Lea Culliton, president of HABA USA.  She walked me through the products on display in their booth and I explained how I didn’t feel we could feature their games well here at SahmReviews. Despite their presence at the biggest gaming convention in the country, I only saw a booth filled with toys and games for young children. Lea encouraged me to try some of their games then informed me that 2016 would include HABA’s first introduction into the adult strategy game market, something more to my liking.

Upon returning from Gen Con, I tried some of HABA’s games including Rhino Hero and Animal Upon Animal and realized I was too quick to judge. Despite their colorful and child-friendly appearance, HABA ‘s products are fun for a variety of ages. Hoping to ease my guilty conscious, we opted to feature a few HABA products in our holiday gift guides. The person who shall remain nameless (I admit, It’s me) learned a valuable lesson about misjudging a book (or box) by its cover. 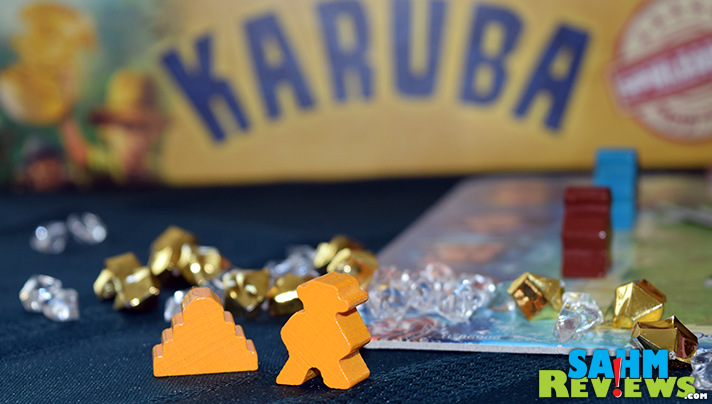 My positive impression of HABA was solidified when I tried out their new Karuba game, one of the new strategy games that Lea had told me about. The premise of the game is that you’re trying to get four explorers through the jungle to their respective temples in a tile-laying process. Karuba plays up to four people and contains a really interesting mechanism for balancing the scales. 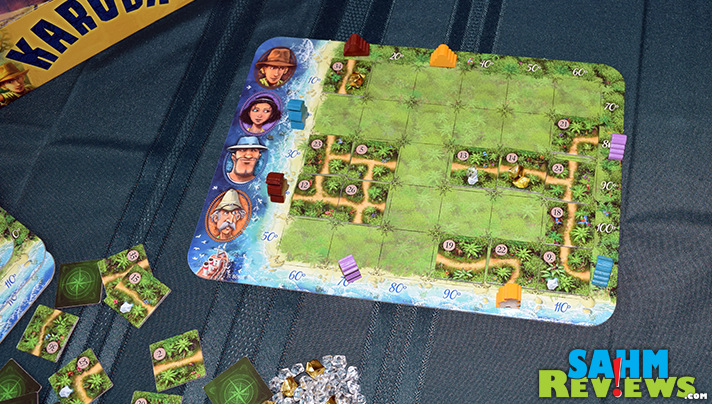 Once a starting player is selected, everyone (except that player) flips their tiles upright and organizes them by number. Starting with the first player, everyone selects the starting point for the explorer as well as the location of the temple. Each player then places their explorer and temple pieces on those spots on their own board. Nobody has their own color or own explorer. Each player is on the same mission utilizing their own playing board. Unlike other tile laying games where everyone draws randomly and individually, Karuba starts everyone playing on equal ground.

The starting player draws a tile randomly from their pile then announces the number to the other players. They locate the identical piece among their own stack then everyone places their tile on the board simultaneously. If the tile displays a gem, a gem matching it is placed on the tile for an explorer to possibly pick up on the way to the temple. I’ll explain more about that in a minute. 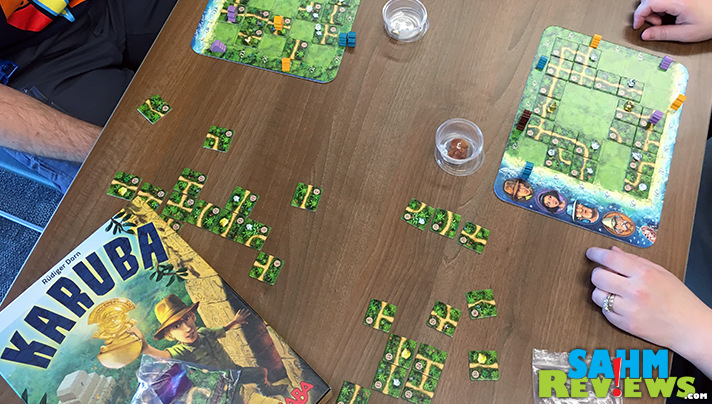 When placing, every player can make their own choices as to where on the entire grid they want to place that particular tile. Some are straight lines, others intersections. The only wrong answer is that you don’t want to block the path that would prevent an explorer from completing the trip. I guess I should mention why traversing the path is important. The faster an explorer gets to the temple, the more victory points the player earns.

Efficiency is pretty important in Karuba. 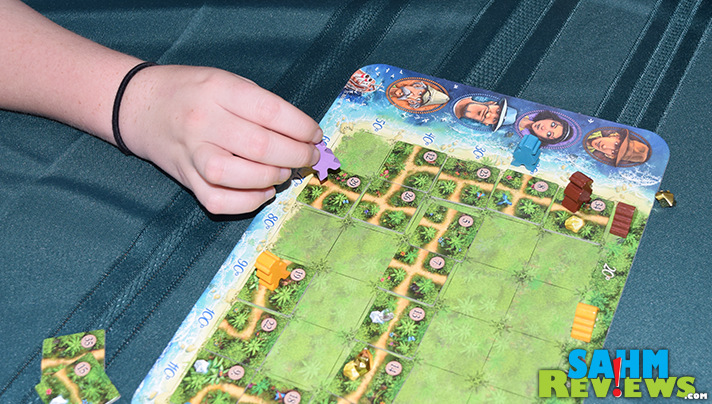 Once a player has one or more tiles placed next to their explorer, they can start to think about advancing him into the jungle. So how do the explorers move? As an alternative to laying the tile, the player can opt to discard it and move their explorer instead. The number of roads on a tile indicate how many steps an explorer is allowed to move. One road with an entrance and exit moves one explorer two steps, a crossroad with three entrances or exits moves the explorer three and so on. Only one explorer is allowed to move with any discarded tile and they aren’t allowed to cross paths or share spaces with another explorer so plan your routes and advances carefully.

If an explorer stops on a space containing a jewel, the player can pick up that item. Passing by one doesn’t count though since the explorer was too busy navigating the jungle to notice the gem on the ground. Each piece of gold collected earns the player two victory points while each crystal awards one victory point. It’s a balancing act as to whether to send an explorer quickly to attain the most victory points by arriving at their temple first or have them progress slowly in order to grab crystals and gold along the way.

Did I mention that efficiency is important in Karuba? I know I did… because it is. The game is over when one of two things happens. Either one player gets all the explorers to their respective temples or the last tile is drawn. Someone who is efficient is going to end the game really fast, shutting other players out from getting all their explorers to the temples.

As someone who enjoys the randomness of dice games (which allows fate to balance the scales), Karuba offers the feel of a tile placement game with the knowledge that everyone was playing throughout the game with equal components. Other people aren’t getting in the way or preventing someone else from moving forward. The winner is ultimately the person who makes the best decision.

Karuba is one of a few new strategy games in HABA’s lineup. We’ll be sharing another soon, but in the meantime learn more on their website, Facebook or Twitter. Earning a well-deserved Speil des Jahres (game of the year) top award nomination, Karuba is an excellent addition to any game shelf! Karuba is available on Amazon for under $40 or can be purchased direct from HABA when they get it back in stock.

How do you feel about HABA entering the strategy board game market?