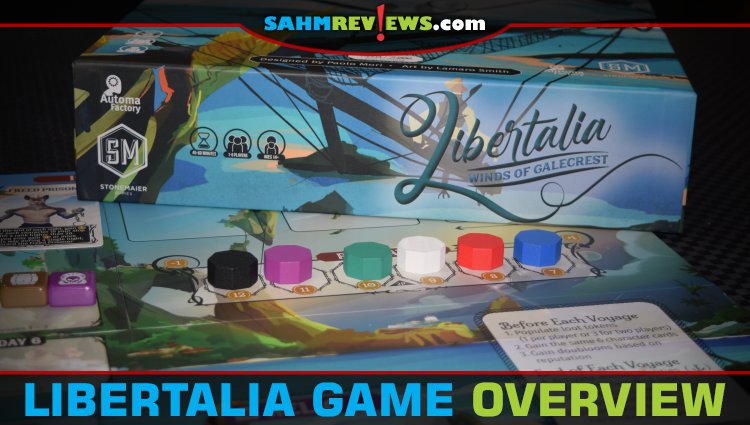 Nostalgia is a pretty powerful thing. It’s what makes us keep things as kids or repurchase them when we become adults. With “adult” money, we can purchase the things that help us relive some of our most carefree years. These things are often vintage toys, but sometimes they are games. This Game is Bonkers was one of my favorite games as a kid and it was a joyous moment when we found a copy a few years ago. With toys, you can often shop on collector sites like eBay to find your holy grail of a childhood memory. But when it comes to games, it’s a bit harder. Games that are well loved end up having components that are missing or damaged and they’re often out of print so you cannot simply buy another. Most board game fanatics have some out-of-print game on their wishlist and as Jamey Stegmaier of Stonemaier Games found out during the pandemic, sometimes the solution is just to find someone get it back to market. That’s the story of Libertalia: Winds of Galecrest. He loved the game, but it’s out of print. People kept telling him they loved it so he secured the rights to reprint it and here we are!

The setup for Libertalia: Winds of Galecrest will vary based on the number of players and your gaming preferences. You can accommodate 3-6 people, use the Automa components to play a solo game, or implement the Midshipman tile for a 2-player version. In addition, there are three styles of play depending on your mood. You can play a family-friendly version or flip the board over for a more complex, devious experience. There’s even an alternative that includes a mix of those two options. Each player takes a graveyard tile, a deck of character cards and the matching scoring chest. Loot tiles are placed on the first four days with the quantity on each equal to the number of players. Finally, randomly add all the reputation tokens (regardless of number of players) then provide each of those players with the designated doubloons.

The game takes place over three multi-day voyages, each consisting of several phases involving character selection, then day, dusk and night activities. The voyage ends by anchoring, scoring and resetting. Each deck of character cards is identical, but the process for randomizing each game is similar to Karuba and Take it to the Limit. One player shuffles their character deck and draws six characters. All other players pull those same characters from their respective, numerically-ordered decks. This represents the people who will be joining you on the voyage.

Players decide who to send onto an island for the day by selecting a card from the character deck then reveal simultaneously. The cards are placed in ascending order by rank (with ties broken by the reputation track). The daytime phase involves activating each character’s power, resolved from left to right. Examples including earning doubloons, gaining or losing reputation, manipulating loot or reassigning pirate duties.

At dusk, the characters on the island are resolved from highest rank. You’ll gain a loot token, activate dusk abilities on the character card or loot token then return them to your ship. The abilities of each loot token are referenced on the board and vary based on the difficulty level selected during game setup. During the night phase, players simultaneously activate all night abilities.

The process repeats for each day of the voyage. After the final day, anchor abilities are activated, scores tallied and the board reset for the next voyage. Unless otherwise stated on cards, loot tokens are always returned to bag after activating. Characters on the ship are sent to the graveyard while unused characters remain in your hand and are available for future voyages. After the third voyage, the player with the greatest wealth in their treasure chest earns bragging rights.

Libertalia: Winds of Galecrest is a quick-paced game with limited downtime between turns. Ask your local game store if they have it in stock or pick up a copy online from Stonemaier Games or Amazon. Follow Jamey Stagmeier and Stonemaier Games on social media (Facebook, Twitter, Instagram) to find out about the cargo on their next voyage in the game industry.

What is a discontinued item you wish would be available again?