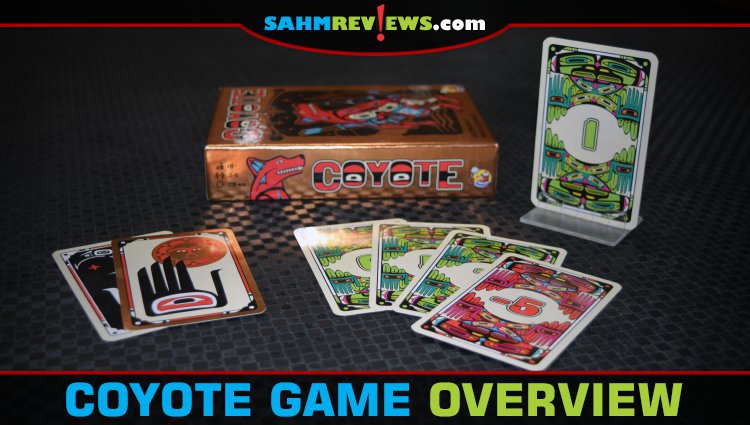 If you’re looking for a sign of how to determine if a game is “good” or not, consider this. When a title has been published by more than one company and has survived at least a decade or two, then the public has spoken. Publishers don’t waste their efforts reissuing something that has failed to prove itself in the market.

Take the recent release of Coyote by Asmodee North America / HeidelBar. It’s an updated version of the 2003 release offered by no less than a dozen publishers around the world. There have been some minor changes and a serious upgrade to the quality, but the basics of the game remain the same.

Inside the box are six card stands, seventeen native-themed foil playing cards, eighteen Peek cards and a Coyote card for an advanced variation of the game. Each person (Coyote supports 3-6 players) receives three Peek cards, which they place in front of them with two depicting an open eye and one with a closed eye (opposite side). They also take one of the card stands and put it in front of them, closer to the center of the table.

The playing cards feature a number on the face that ranges from 0 to 10 or is a -10, -5, 15 or 20. Two additional special cards display a “?” or “Max 0”. These are shuffled into a face-down deck. Coyote is played over rounds. At the start of a round each person draws one card from the deck, and without looking at it, places it in their stand facing away from them. One additional card is drawn and placed face-down on the table without anyone seeing it.

You are trying to win the round by betting the total sum of all cards in play without being able to see the value of yours or the extra one on the table. Beginning with the start player, each person will bid an amount higher than the previous bid and hopefully lower than the total. At any time, instead of bidding, you may challenge the current bid if you think the total is less than the number declared by the previous player.

If you, as the challenger, are correct, you win the round. If not, the person before you who last bid wins. The winner flips over one of their Peek cards to the open eye side (if possible), while the loser discards one of theirs to the box. Another round is played in the exact same manner, with the loser of the last round becoming the start player. The last player standing with Peek cards after multiple rounds is the overall winner of Coyote.

At this point the game might sound overly simple. However, special cards do mix up the play. First, the Peek cards. if you have at least one Peek card showing an open eye, you may use its special effect at the beginning of your turn to look at the extra card on the table. After doing so, you must raise the bid (you may not challenge). The other two special playing cards also make things a bit trickier.

If the “?” card is in play, at the end of the round when there has been a challenge, replace that card with the top card from the draw pile. The “Max 0” card cancels the highest valued card in play. This can really affect the final total and must be considered when making your bid. Hopefully either isn’t the secret card on the table or yours, which you can’t see!

We play the advanced version of the game which includes the Trickster. The setup is the same except you begin with only one open eye Peek card and two with the closed eye face-up. Before resolving a challenge, all other players bet on who they think is correct, and if right, get to turn one of their own Peek cards to the open side. If wrong, turn an open eye to the closed side. During setup, a special Coyote card is put in the center of the play area. This is given to the loser of a round and awards them with a special ability only usable in the next round. When played, draw the top card from the deck, allow the person holding the Coyote card to see its value, and then place it face-down next to the other secret card. The Coyote card is put on top of it to show it has been used and other players may peek later by spending their Peek card appropriately.

This latest version of Coyote hasn’t hit Amazon quite yet as it is brand new this fall. Ask for it at your favorite local game store, where you’ll find it at an incredibly attractive $15 MSRP.

What game can you think of that has been offered for a long time by many different publishers?