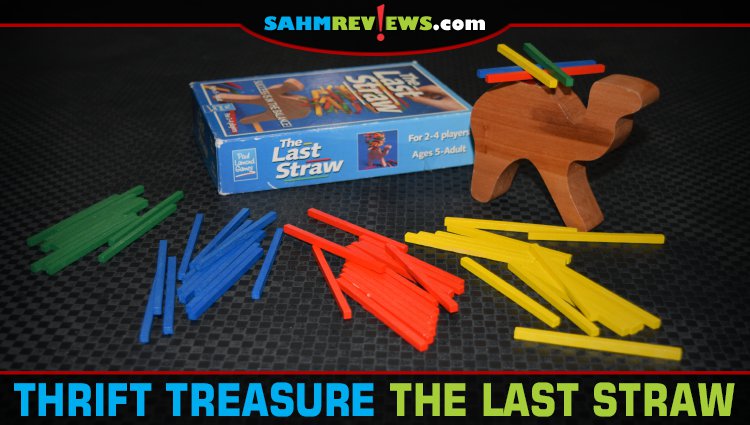 Our trip to the D.A.V. thrift store two weeks ago didn’t yield only puzzles like last week’s Thrift Treasure, Quiver. We also managed to find a few new-to-us games for the collection. Most were under a dollar, so even if they weren’t complete, it was worth the risk to us.

The first one we’ve gotten to the table is this 1988 copy of The Last Straw by Paul Lamond Games (now part of University Games). Versions of this game have featured elephants and donkeys, while ours sports a camel. In addition to this large wooden desert animal, the box contains sixty wooden sticks of four primary colors (15 each).

Our copy was missing a few sticks, so the setup included making sure all players had the same number of pieces to begin the game. The camel was set in the center of the play area and a first player chosen. The object of The Last Straw is to be the first person to get rid of all their sticks.

On your turn you will place one stick onto the camel’s back, either on the designated area or on top of another stick. You may not balance a stick on the animal’s head. There are no other restrictions to placement as the sticks can be on top of each other or side to side. If the stick balances on the camel’s back, your turn is valid.

Any pieces that fall from the camel’s back are given to the active player to add to their pile. Play continues in clockwise order until one player plays their last piece successfully to the camel. The Last Straw is like dozens of other stacking games published over the years and really doesn’t offer anything new to the genre, even in the decade it was issued. It’s most likely inspired by the 1966 version by the same name that had a rubber band connecting two parts of a camel and the pieces would eventually cause you to break the camel’s back.

A handful of copies may be found on eBay for a wild range of prices. Be sure to ask about the contents to verify all the pieces are present. Alternately, if you’re in the market for a good stacking game, we highly recommend Animal Upon Animal.

Do you take a chance on thrift games without checking if all the pieces are there?