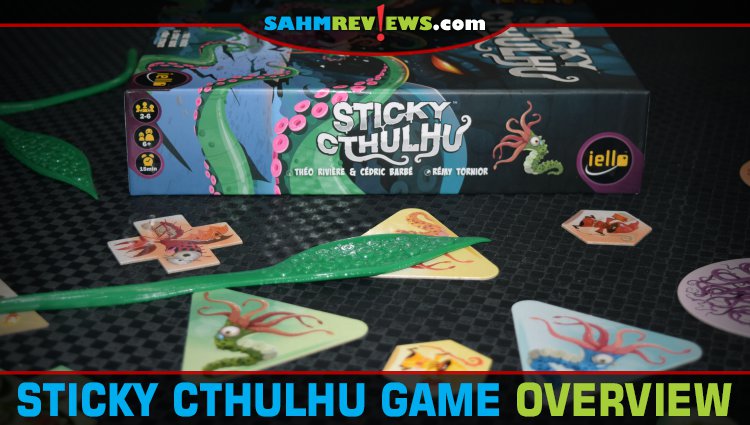 Have you ever heard the term reimplementation? It’s a very common marketing tactic for reaching a whole new segment of consumers. Think about it. You might not be interested in purchasing a chess set, but when you see one made with your favorite team, video game characters or TV series, you may change your mind. When it comes to board games, a reimplementation is sometimes simply an improvement upon the original version of the game. Restoration Games has done that with many titles including Downforce, Stop Thief, Indulgence and Dinosaur Tea Party. However, it’s more common to see a game reissued with a license. Thanos Rising was so successful that it became the foundation for Batman, Star Wars, Harry Potter and SpongeBob versions.

When we really became involved in the board game industry, I noticed that you couldn’t take two steps in a gaming/pop culture/geek space without encountering something Cthulhu. I was surprised to learn that this creature was invented by H. P. Lovecraft and published in a magazine back in 1928. Someone once jokingly told me that Cthulhu is like a money machine. People cannot get enough of it. So it’s not surprising when we see something new carrying the IP. While attending Gen Con, we picked up a copy of Sticky Cthulhu from IELLO, a reimplementation of Sticky Chameleons. While the story is different, the gameplay and setup are basically the same. Begin by giving each player a tentacle then randomly arrange the investigator and creature tokens in the center of the table. Shuffle the curse cards and set them face-down alongside the swarm. Create a general supply of Deep Ones tokens. Place the dice in front of the first player and get ready to ward off the annoying creatures that are bothering Cthulhu while he sleeps.

The first player rolls the dice then simultaneously all players launch their tentacles in an effort to snatch the matching creature from the pile. As you may recall from our Sticky Chameleons overview, these tentacles are like the wall-walker, sticky toys. As your tentacle comes in contact with the creatures on the board, they stick to it like flypaper. You’ll want to be the first to capture the right one so not only is this a dexterity game, but it’s also requires speed. If you miss, keep trying as quickly as you can in order to secure the creature before your opponents.

It may sound simple, but I assure you it isn’t. You’ll get entangled with other protectors while targeting the same creature. Of you may have horrible aim and miss altogether, landing something completely different. In the event you collect something you aren’t supposed to, you’ll need to shake your tentacle until it falls off. You aren’t allowed to use your hands except when you capture the right one.

The player who manages to capture the matching creature removes it from their tentacle then earns a Deep Ones token from the general supply. The first player to amass five of these tokens earns the right to destroy humanity on behalf of Cthulhu.

If you happen to have an investigator stuck to your tentacle at the same time as the target creature then you remove them both, place the creature on the table then move to the next round. You forfeit the right to collect a token. The player who captured the creature becomes the active player and is in charge of rolling the dice to determine the next target.

The Curse cards are optional, but add another layer to the game. They impose obstacles such as stand on one leg, play with your non-dominant hand or keep one eye closed. If you collect a token, draw a curse card from the deck then follow the restrictions until you replace it with another card. That only happens if you manage to get another token. If you are caught not abiding by your curse, you lose one of your tokens and discard the card.

You continue through rounds until someone has five tokens and earns the respect of Cthulhu. This is a quick, dexterity game for up to six players and perfectly fine for younger kids. If you’re uncomfortable introducing them to Cthulhu, play the Sticky Chameleons version. Both copies are available on Amazon, but check with local game stores that carry IELLO products. Keep watch for the other IELLO games we picked up while attending Gen Con. In the meantime, you can check them out on Twitter and Facebook for news about their other new releases!

Are you familiar with the works of H. P. Lovecraft?