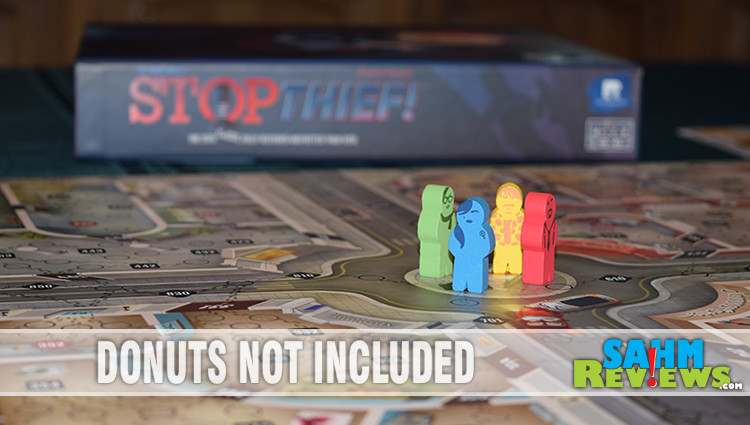 Back in January of 2014, Scott featured Tetris Link in what became the first feature in our Thrift Treasure series. The series showcases something he purchased through some thrift practice. Usually it’s a Goodwill, sometimes a yard sale or auction and occasionally some other method. Every once in a while we’ll find something released within the past year and sometimes it’s even still in shrink wrap. More often, it’s a game that simply has grown out of favor with the prior owner for one reason or another. For us, it’s all new and we’re always happy to spend a couple bucks for a night of entertainment around the game table.

Some of the games that have been the most exciting Thrift Store scores have been ones we remember from our own childhood. There were a couple titles (like This Game is Bonkers!) that brought back fond memories for me and several (such as Crossfire) that brought a smile to Scott’s face. There are a lot of old games that have life still in them, but are in need of a little TLC. Last year we told you about Restoration Games and their mission to revive and re-release games like Downforce and Indulgence. Another that pays homage to their thoughts that “every game deserves another turn” is Stop Thief!, a remake of the 1979 Parker Brothers game of the same name. Your goal is to be the first player to collect enough cash to retire. 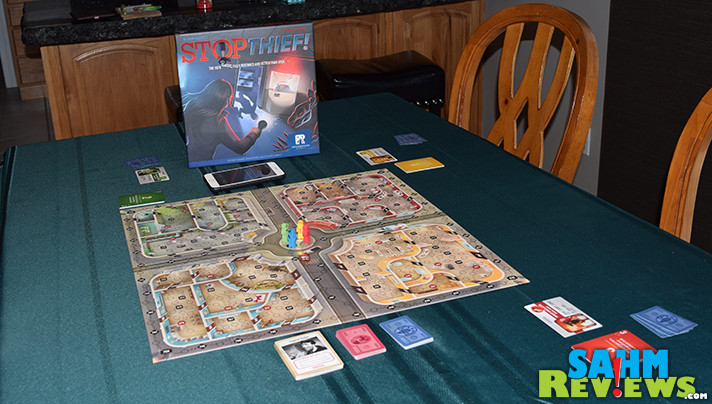 Place the game board in the center of the table with the shuffled thief deck next to it and the money alongside to create a bank.. Wait. Before you do anything else, have someone download the Restoration Games app on iTunes, Google Play or Amazon because it tracks the thief’s location which removes the need for a game monitor. You and up to three friends each claim your favorite investigator piece, matching ID card and related movement cards along with $3,000 from the bank. Place your investigator meeples on the subway space in the center of the board then launch the app. You’re ready to start investigating!

The actions of the thief are controlled by the app, which also is how you get the clues to solve the crime. On your turn you’ll take three steps in the following order: Get a clue and play a card. Optionally, you can attempt an arrest, which is the third action. First, select the “Get a Clue” button on the app and it will play a sound for all investigators. Clues are public knowledge so if anyone didn’t hear it, you can replay it. The sounds you hear will give clues to what direction the thief has moved. As an example, if you hear breaking glass, the thief has broken a window to move through. If you hear footsteps, you know the thief is inside a building. There’s a reward for each thief, but if they go on a crime spree, the reward will increase! 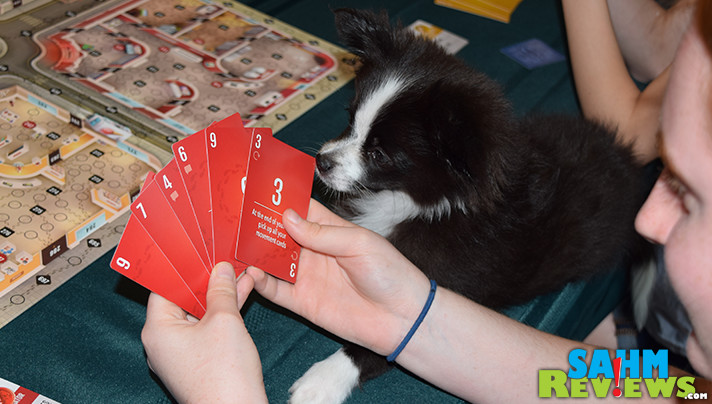 Take the various clues into consideration then take the second action. It’s worth noting that the thief moves only on the numbered spaces, but investigators move on all the spaces so you need to play your cards carefully to get within range. Play a card to allow you to move across the board. This is important because you need to be on a space adjacent to the thief to be able to successfully make an arrest. 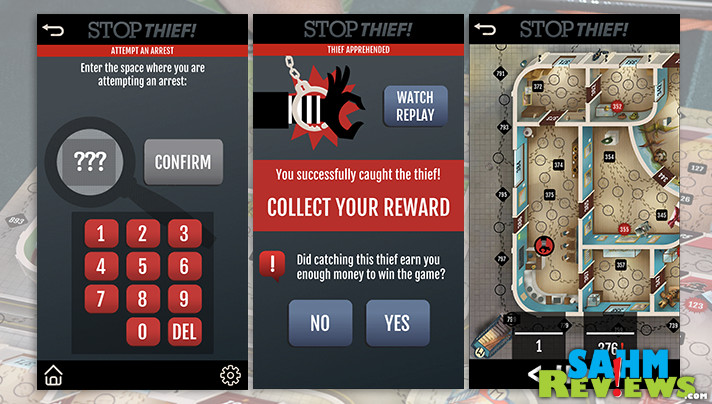 Your goal is to be the first to make an arrest and collect the reward money. If you attempt to make an arrest, punch in your space number and if you’re right you collect the reward. If you are successful, it will tell you to claim your reward money, but also gives you the opportunity to see a replay of the path the criminal took. The first time we played, we didn’t do this and it left us confused when we sometimes guessed incorrectly. Not only were we questioning whether it was accurate, but we also lost money! If you’re incorrect when you make an attempt, you have to pay $1,000 to the bank. When a thief is arrested, the app questions if you met the end game goal and if not, a new round starts and another chase is on. This process continues until one player reaches the designated goal.

The concept of the game is very similar to other games such as Last Friday, Odyssey Wrath of Poseidon and Letters from Whitechapel. However, each of those games fall into the category of “One vs many” where one player is “it” and everyone else is trying to locate them. Stop Thief! stays true to the original by defaulting to every player hunting on their own. 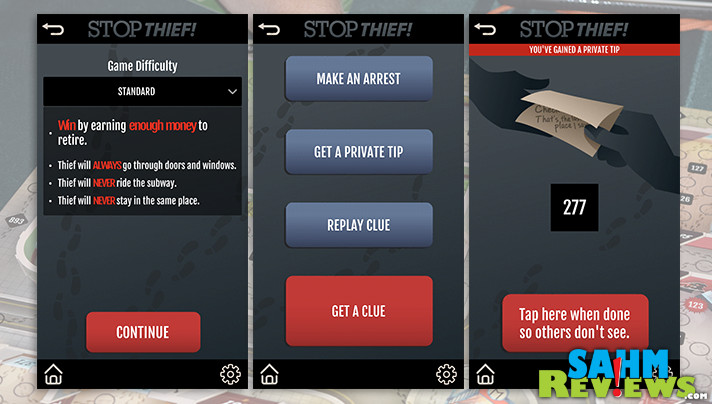 With the inclusion of the Stop Thief! app, which replaces the electronic Crime Scanner in the original 1979 version, all players are able to participate. The app also allows the creators to make updates to the game to give it more replayability. As an example, they recently posted instructions to make Stop Thief! a cooperative game instead with “1 vs all” and “solo” options coming soon.

Restoration Games has more retro games in the pipeline so stake out their Facebook and Twitter channels for news and announcements. We’ll be sharing more with you in coming months so stay tuned. In the meantime, if you’re up to the sleuthing challenge of Stop Thief!, pick up a copy direct from Restoration Games or order a copy for under $25 on Amazon.

Do you enjoy games with a detective theme?