I find it interesting how some things that were in fashion a long time ago miraculously resurface for a new generation. White t-shirts and leather jackets saw a resurgence thanks to both Happy Days and Grease. 80’s neon colors were all the rage among tweens just a copy years ago. Even vinyl records have made a huge comeback for those seeking the warm sounds of an analog recording. What could be next?

This nostalgia resurgence didn’t go unnoticed by a few game industry household names. That’s when the idea of bringing back classic board games began to become reality. But games have advanced so much over the past couple of decades. Would the public accept these old games with outdated mechanics? Probably not. These games needed new artwork, updated mechanics and 21st century components. Restoration Games was formed to accomplish this and more.

Right now at the Gen Con convention in Indianapolis, IN, three of Restoration Games’ first titles are making their grand debut. There were all classic games, restyled and redone to fit today’s game world. We had the fortunate opportunity to try out Stop Thief at Geekway to the West, and Downforce and Indulgence while attending the Origins Game Fair. And because we have fantastic friends in the industry, we were able to get our hands on one of the very first copies of each to preview on SahmReviews! 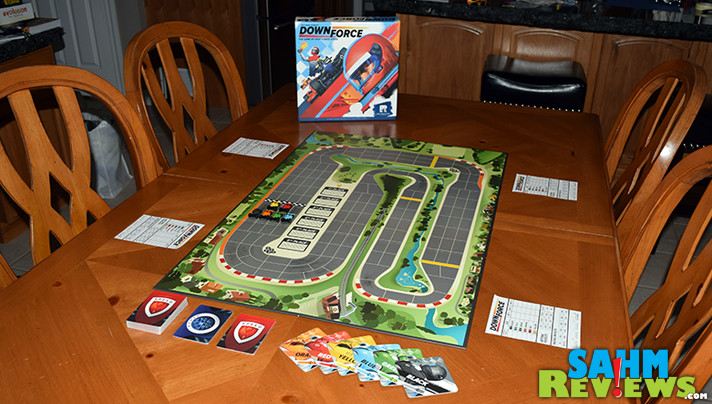 We’re going to start with the one that has gotten the most play time by our family, friends and game night acquaintances – Downforce. It was originally issued in 1974 under the name “Tempo”, then in 1980 as “Formel 1”. Over the next decade or so it would be printed under a number of additional names before being picked up by Milton Bradley and rebranded “Daytona 500”. The last time it hit the retail shelves was around 1996 as “Top Race” when it was nominated for the coveted Spiel des Jahres (Best Game of the Year Award). 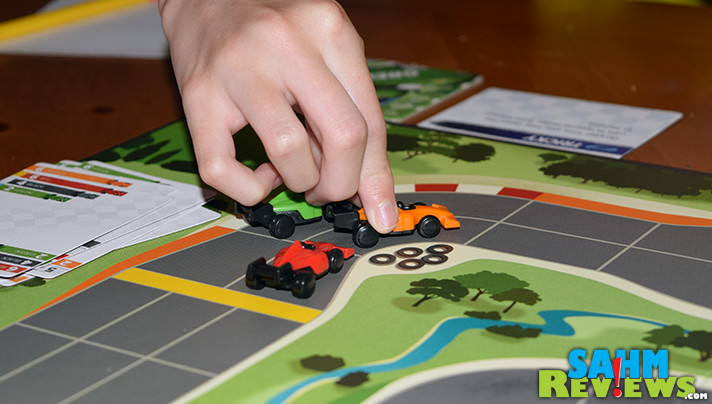 Fortunately with such high praise given to previous versions, not many tweaks were needed for the issue of Downforce. Over the years there had been many addon modules and Restoration Games only needed to decide which were best to incorporate into the base game, and then they could focus on streamlining the artwork and components to bring it in line with today’s game standards. But that’s enough about the history of the game – I’m sure you want to know what Downforce is all about and whether it should be in the next board game purchase for your family! Let’s take a closer look. 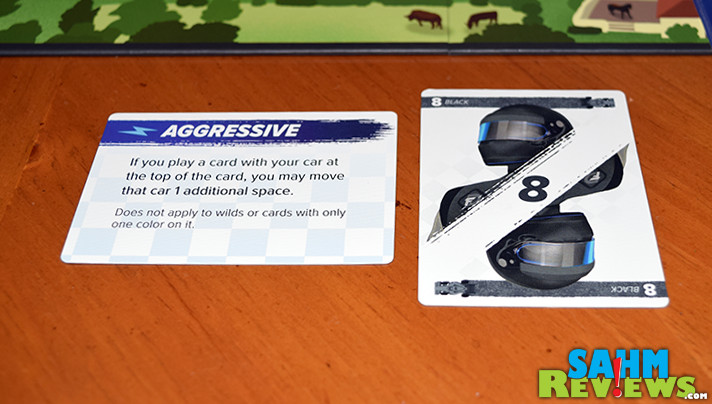 Downforce is one of the easiest-to-learn racing games we’ve played, but that doesn’t mean it is skimping on substance. Each player will head up a team, designated by a color, and receive a matching car and team card. It’s not as simply as choosing your favorite color, you have to bid for it at auction. To sweeten the pot, each auction round also includes a randomly-chosen “Power” card that you can use during the game. The amount of your bid will be deducted from your winnings at the end of the game. 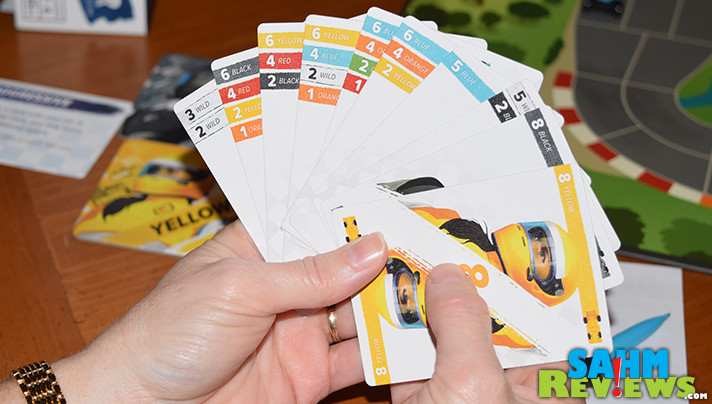 Movement of your race cars is also rather unique. Included in Downforce is a deck of 42 speed cards. These depict a number of cars and their colors, and when played, are resolved top to bottom. This means on your turn you are moving not only you car, but up to five other cars as well. But you’re in control, so you get to decide what lane/etc. they take. 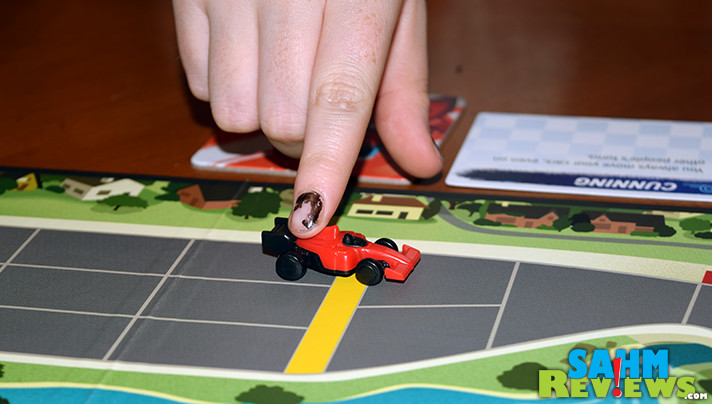 The meat of the game occurs when you cross one of the yellow lines at various points on the track. You do not win Downforce by simply being first across the line. You must wager on which car you think will place where. After passing the yellow line, everyone bets on which car they think will win the race by placing a mark on their scoresheet. The payouts are obviously much higher if you guess correctly earlier in the race, but because there are three bidding opportunities, having the car you bid on suddenly fall to the back of the pack won’t mean you’re out of the running. You can still bid on (and affect) the race of a different color in those later stages! 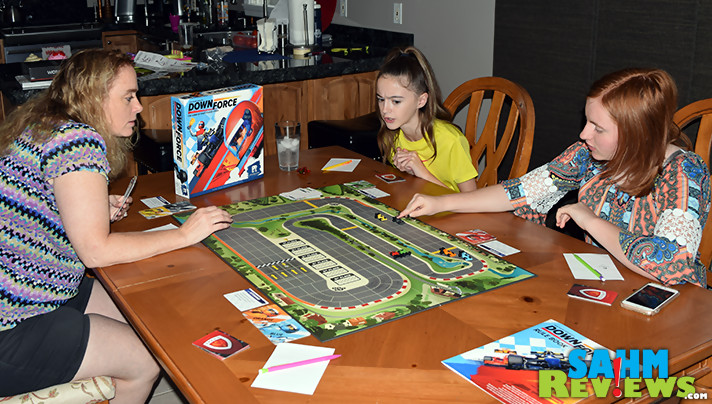 The previously-mentioned Power cards allow each player to affect the race in various ways. One grants a bonus if you only travel on the straight parts of the track, another gives you the privilege of always moving your own car instead of allowing your opponents to move it on their turn. And yet another awards you with the ability to simply ignore one of the cars on your card, stranding them for your turn. 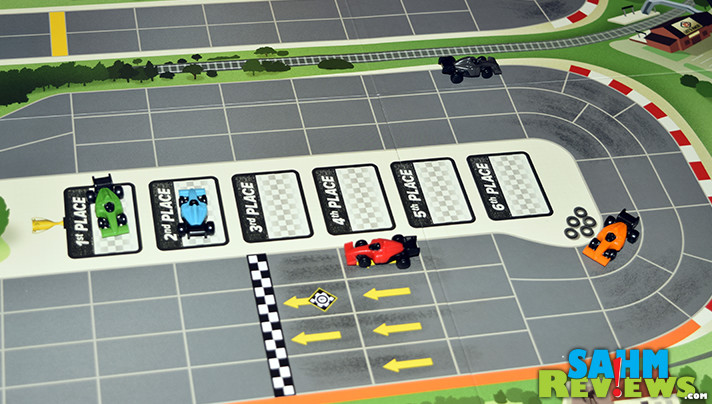 The race is for only one lap and ends once everyone has either crossed the finish line or runs out of cards (runs out of gas on the track). Payouts are calculated based upon how the cars finished and the accuracy of everyone’s bets. Adding this to your team’s winnings (an award for placing high in the race) and subtracting how much you original spent to purchase your car gives you your final total. The racer with the highest total wins Downforce! 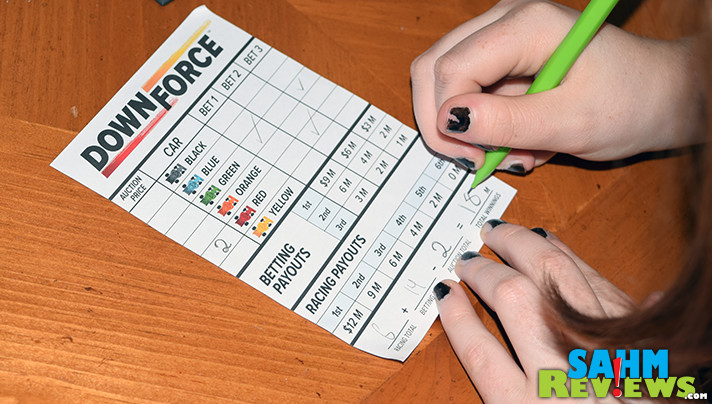 I never had the pleasure to play any of the original versions, but after over a dozen rounds of Downforce I see no need to seek them out. Right now Downforce is my go-to suggestion for anyone looking for an introductory racing game, especially those who wish to play it with people of all ages. While the box claims Downforce is for ages 14+, this is solely due to product safety testing requirements. If you have kids as young as 7 or 8 (and they don’t stick small things in their mouths), they will have a blast playing this quick 30 minute game. 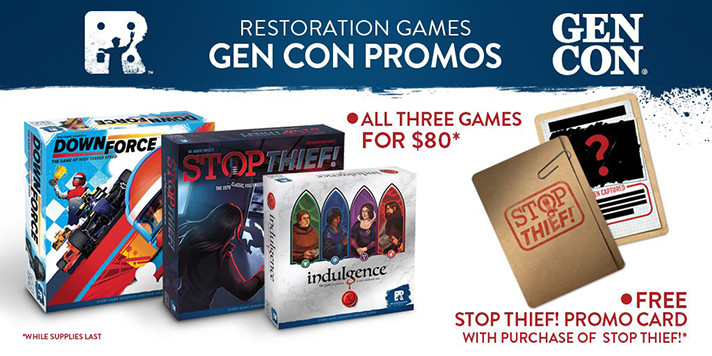 Copies are for sale right now at Gen Con booth #3058 in Indianapolis, and will be available on Amazon shortly after the convention closes. We’ll update you when the Amazon links go live, but until then be sure you’re following Restoration Games on Facebook and Twitter so you can find out which game they’ll be re-imagining next!

It’s only been a year, but there’s a new expansion just released at GenCon last month! Like the majority of hobby game expansions, you’ll need the base game of Downforce to play. Called the Danger Circuit Expansion, this inexpensive add-on contains a double-sided board with two different tracks! 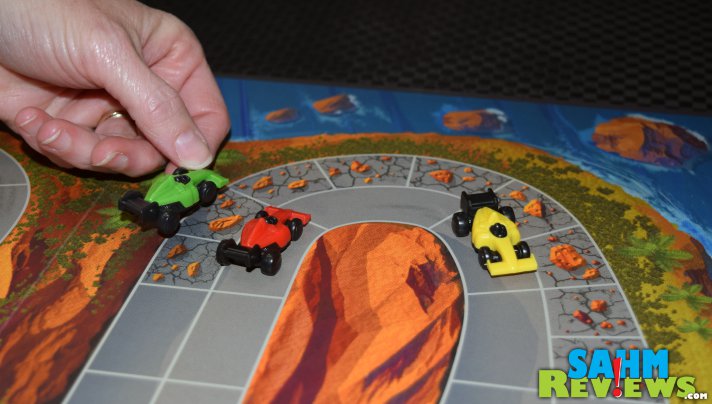 On one side you’ll find the Switchback Pass track. This desert-themed course features dangerous spaces you cannot normally race in. You may only use these rough areas to pass because the pavement is cracked and filled with debris. You cannot end your turn in one of these spaces, so you must clear them entirely and move back into a safe lane in order to use the full limit of your movement. 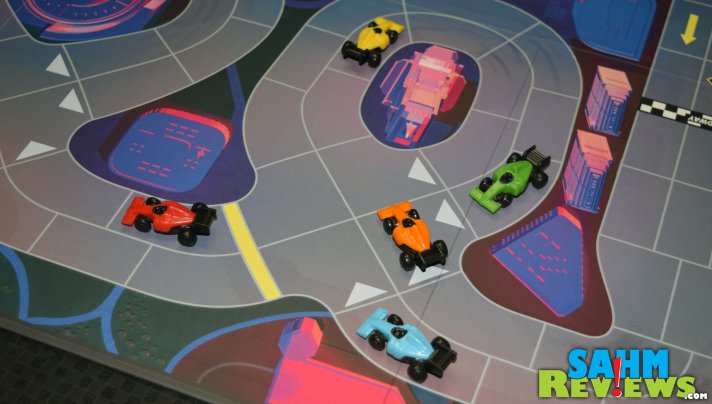 The opposite side of the board hosts the Crosstown Speedway. Looking like something out of a Saturday morning cartoon (Wacky Races), its main feature is two crossover loops which force racers to cross over a previously-run section of the track. This causes some interesting traffic jams as the normal rules about moving through an occupied space prevail. There are also two split sections of the course that might make the trip quicker or slow you down behind a car you cannot pass at all. 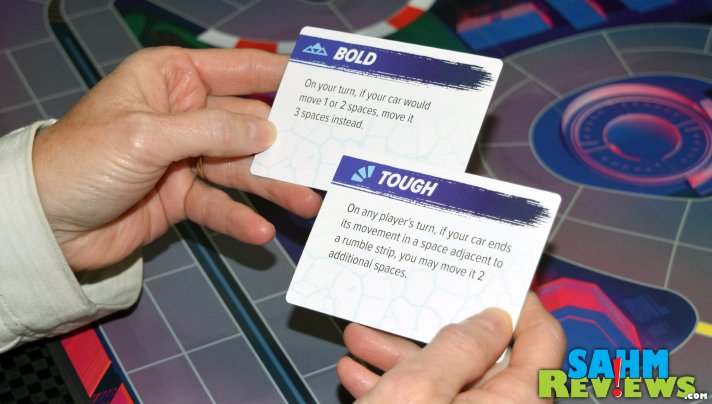 Also included in the Danger Circuit Expansion are six new Power Cards that may be also added to the base game. These might alter the order in which you move your car, award extra movement if next to a rumble strip or give you a drafting bonus due to your experience! With all of these add-ons available on Amazon or at your favorite local game store, it is a must-have expansion if you already own the base game. Another bonus! This expansion fits inside the base box as long as you discard the original cardboard insert!

32 comments on «Downforce Board Game Overview»