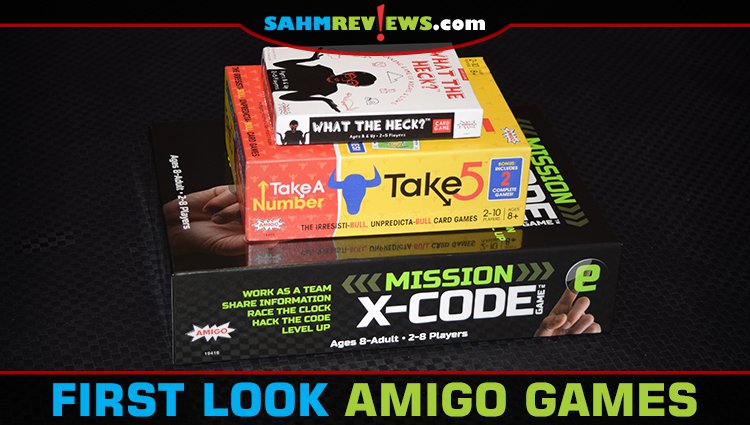 I’m afraid to admit how many times I’ve been at an event or party and made the assumption that everyone knew each other. I pride myself in being a connector and introducing people to each other at the beginning of the conversation. But sometimes it slips through the cracks and I feel like a heel later on when someone asks who the other person was. Today is one of those instances. Over the past several weeks, I’ve been telling you about a lot of great games, toys and electronics in our gift guides and holiday giveaways. Unfortunately, I’ve completely forgotten my manors and made the assumption we’ve featured the companies here before. What the Heck? and Mission X-Code from AMIGO were included in those guides but I hadn’t taken the time to introduce you to them yet. Let’s fix that by telling you about those games along with one other to give you a feel for some of the depth of what AMIGO Games has to offer.

That’s not a question. It’s the name of the card game! It just happens to be what you’ll be saying when another player hoses you and sticks you with the lousy cards. Akin to hearts or spades, you’ll be using the cards in your hands to secure some cards, while avoiding others in an attempt to earn the most points. What the Heck? includes five identical sets of player cards in different colors along with a set of point cards. To play the game, each player takes all the cards of their selected color. Unused sets are removed from the game. The deck of point cards are shuffled and placed in the center of the table face down. 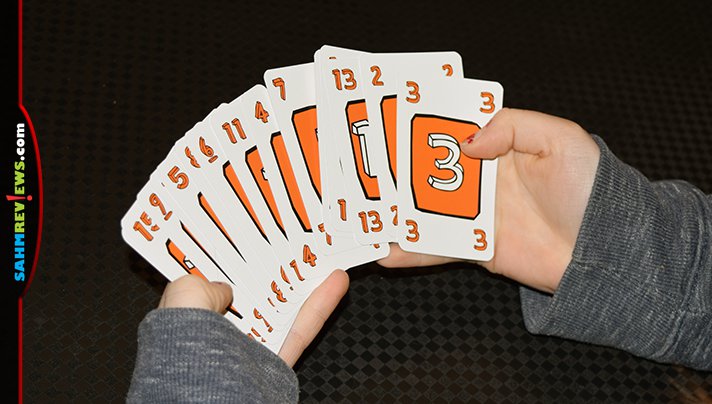 The game will consist of 15 rounds. One card will be played from those remaining in your hand until all have been used. At the beginning of the round, flip the top card in the Points Card stack. The 15 cards in this stack range from -5 to +10. When the card is positive, you’ll be trying to play the highest card to earn the points. If it’s a negative, you’ll be trying NOT to have the lowest. 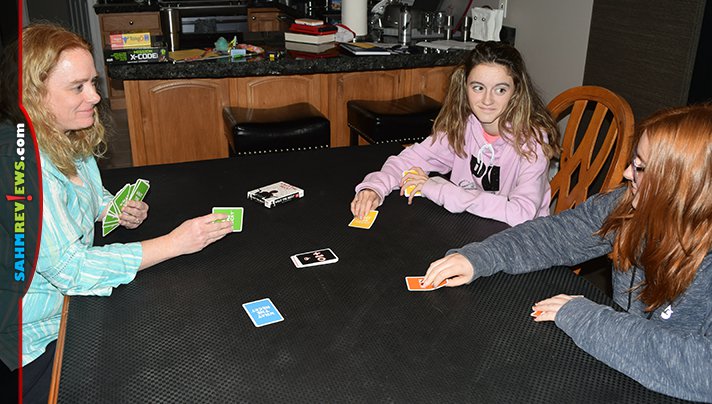 Each player will secretly select a card from their hand and everyone will reveal them simultaneously. The person who played the highest card for a positive point card wins it. The person who played the lowest card for a negative gets stuck with it. EXCEPT if there are ties! Ties cancel each other out, so you may end up with a negative point card even though you thought you played a safe card… and as I mentioned before, you may find yourself saying, “What the Heck?” It only takes about 15 minutes to play so it’s great for a break during work or between other activities such as homework, chores or marathons of heavier games. Look for it at your local retailer or pick up a copy of What the Heck? on Amazon.

Ahhh… the glory of playing a cooperative game. I love that either everyone wins or everyone loses. In Mission X-Code, there’s been a cyber-hack and only the right 12-digit code can unlock the entire system. You’ll be working with the rest of the players (up to 8!!!) to figure out the code by covering all the spaces on the board with cards that match those places. Oh, did I mention you have to do it in under three minutes?! You do. Good luck with that. This game is similar to an escape room game where you want to keep the information secret so you don’t spoil the results. So setup is simple. Place the board and timer in the center of the table, break the seal on the box you’ll be using and remove the contents. Place the wild cards back in the box and shuffle all the remaining cards. Deal 3 to each player. The rest are placed alongside the board as a Draw Pile. 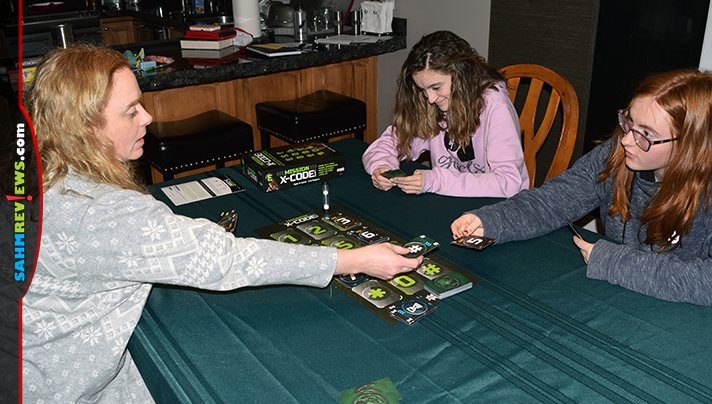 Once the time starts, everyone plays simultaneously in an effort to place 3-of-a-kind on each of the spaces on the board. You can draw one card, swap one card with the teammate on your right or left, play a set of three cards to the board or discard any three cards from your hand. You can tell your teammates what you have or need, but you cannot show anyone your cards! Your hand size is determined by the number of players. 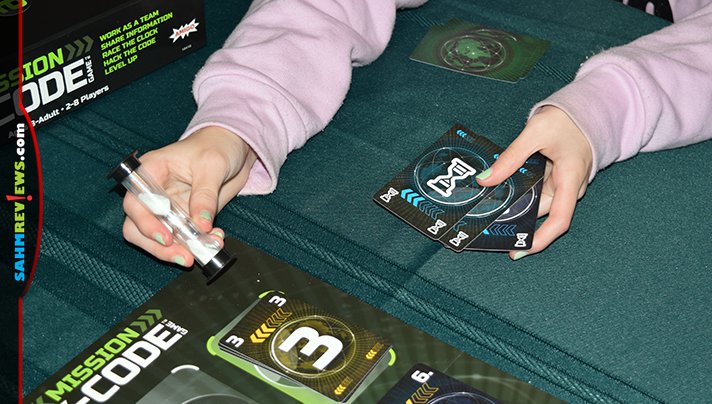 Swapping cards isn’t as simple as trading with the person next to you. In order to swap, you need to follow the arrows displayed on the card. You can trade a blue right arrow of any card with the person on your right as long as they hand you back a yellow left arrow! Now is a good time to remind you of the three-minute time limit! When you have a set of any three cards, you can place them face-up on the related space on the board. Need more time? Play three cards that display an hourglass. The game ends when you either run out of time or you and your teammates cover all 12 spaces on the board! Grab a copy of Mission X-Code on Amazon or at your local retailer.

Sometimes games are good on their own. Sometimes a few tweaks can make it even better. In the case of Take 5, a few changes to Take 5 resulted in a second game, Take a Number. AMIGO sells the two together as a bonus box! For the sake of simplicity, I’ll explain Take 5 then give details on what Take a Number adds to the game. The goal of Take 5 is to score the fewest penalty points as displayed by the bull logo at the top and bottom of each card. As with pretty much all of the games in the AMIGO line, setup is simple. Shuffle the cards and deal 10 to each player (up to 10 people). Deal the next four cards face-up into a column in the left-center of the table. Any cards remaining due are set aside until the next round. 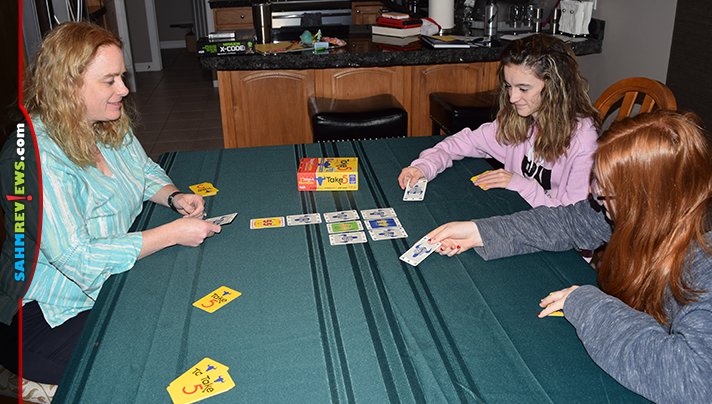 Take the 10 cards you received and arrange them in your hand so that other players cannot see them. At the beginning of each turn, all players chooses one card from their hand and places it face-down in front of them. All at once, players reveal their cards. The lowest card goes first and places their card into the tableau in ascending order to the right of the existing cards. If it’s higher than more than one number, then it’s placed next to the one it’s closest to numerically. As an example, if the rightmost cards in the row are 3, 7, 23 and 26 and the player is trying to play a 15, it would go next to the 7. It can’t be placed next to the 23 or 26 since those are higher. It can’t be placed next to the 3 since the 7 is closer to 15. 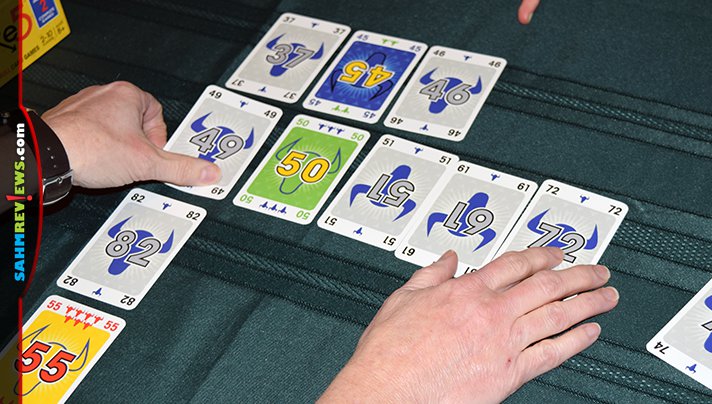 All players take turns continuing with this process. After each player has placed their card, everyone selects another card and it all repeats for a total of 10 turns. However, there are a couple stipulations. If the card you played is lower than of the available spaces, you’ll need to take a row of your choice to clear space for your card. You’ll want to select the row that has the least amount of points in it! Remember, those are determined by the number of bulls on the card which can be from 1-5. In addition, each row can only hold five cards so if the card you are getting ready to play would be the 6th in a row, you need to take the entire row and begin a new row with your card. Any cards you collect are added face-down to your own personal Bull pile. After 10 rounds, everyone counts the number of points they acquired in their Bull Pile and play continues until one player has amassed more than 66 points. The one with the least points wins. Shuffle up and play again!

In Take a Number, each player will only get 8 number cards instead of 10. In addition, Row Cards are placed in the first column followed by a randomly drawn card similar to Take 5. The Row Cards start with 3→, 4→ and 5→. In addition, a #→ is placed in front of each player. Unlike in Take 5, each row is limited by the number represented in the first column. When the final card is played, that player must take the prior cards in the row and begin the new row with the card they are placing. They will select one card from those collected and place it into their own personal #→ row. All remaining cards go straight into the player’s hand for use in future rounds! Their own personal # row must abide by the same ascending rules as normal rows. When a player is unable to place a higher card in their # row then they remove all the cards from that row to place in a # pile then start a new personal # row. When a player runs out of cards in their hand and doesn’t pick any new ones up, the round ends. You receive a penalty point for each bullhead on cards in your hand. You receive two penalty points for each bullhead on Number Cards in your #→ Pile. #→ rows are safe from penalty points. You play two rounds like this and the player with the lowest score wins! You may find single copies of Take 5 and Take a Number at local retailers, but you can pick up the Take 5 / Take a Number bonus pack on Amazon!

One thing consistent with all AMIGO games in their family line is that they have 5 rules or less making them easy to learn and quick to get up and running. It’s something they pride themselves in saying, along with focusing on keeping the price point under $20. This is just a small sampling of what AMIGO Games has to offer. Stay tuned as we’ll be sharing more overviews of the games in the future. In the meantime, check out their entire line on the AMIGO Games website or visit them on Facebook and Instagram.

Which of these AMIGO games do you want to try first?