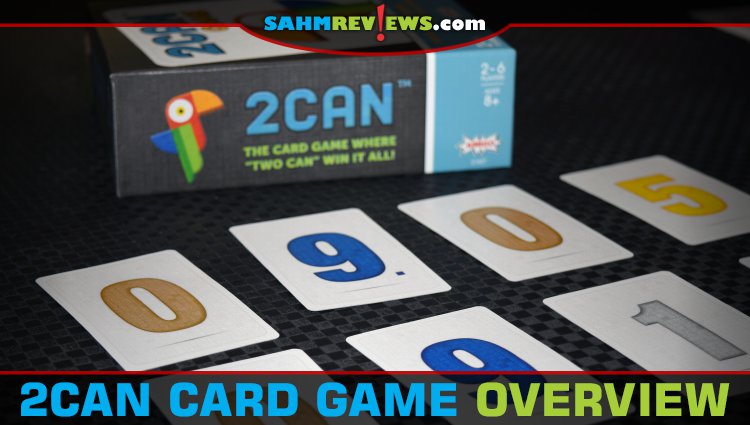 We aren’t even empty nesters yet, but it sure feels like it since our youngest is so busy. I already miss the days of being able to pile in the family van and play games until late into the evening at our weekly board game meetup. But times are changing and I get it. As much as I enjoy strategy games, it seems that our schedule is more conducive to quicker games. Two-player games seem to be what we’re looking at more often. During my meeting with Amigo at Gen Con, they showed us 2Can. It checked a lot of boxes for me. It’s quick, easy to learn and accommodates as few as two (and up to six) people.

As we explained in our first look at Amigo Games, one of their credos is that their games are limited to five rules or less. Not only does that translate into a game that’s easy to learn, but it’s usually pretty quick to set up. Shuffle the deck and deal eight face-down cards to each player which are placed in 2×4 tableaus. The remainder of the deck is set in the center of the table as a draw pile with the top card revealed to form a discard pile. Everyone randomly selects two of their cards to flip then the player with the highest value displayed goes first.

2Can takes place over five rounds where the goal is to have the lowest possible score. Once all cards are face-up, you’ll sum the cards, but there are ways to pair them up to reduce your score. More on that when we talk about the end of the round. There aren’t a lot of choices to make when it comes to 2Can.

Take the top card from either the draw OR discard pile. Look at the card then decide whether you want to keep it or discard it. If you blindly took a card from the draw pile and don’t want it, you place it face-up in the discard pile. As a consolation, you may flip over one of your face-down cards. If you would like to keep it, you’ll replace one of the existing cards in your grid, discarding the one you’re removing.

There’s also a 2Can card that’s actually a wild and matches anything it’s paired with. If you draw a card in the future that you want in the place of the 2Can then you can do so and move it to another face-down place in your tableau. It’s the only card that can be moved in this fashion.

You continue taking turns drawing and flipping until one player has revealed all their cards. At this time, every other player gets one more turn then reveals all their remaining cards in order to score. Cards that are paired in a column cancel each other out. If you’ve managed to create two, three or four of the same pair then you’ll deduct 10, 15 and 20 points from your score, respectively. Record your scores for the round on the scorepad then the player with the lowest score after five rounds wins.

Amigo has a variety of easy-to-play card games and 2Can certainly fits into that. Ask about 2Can at your local game store or visit the store locator on the Amigo website. Check out the assortment of Amigo products on Amazon or visit them on social media (Facebook, Instagram) to see some of the other options in their line.

How often do you play card games?

20 comments on «2Can Card Game Overview»