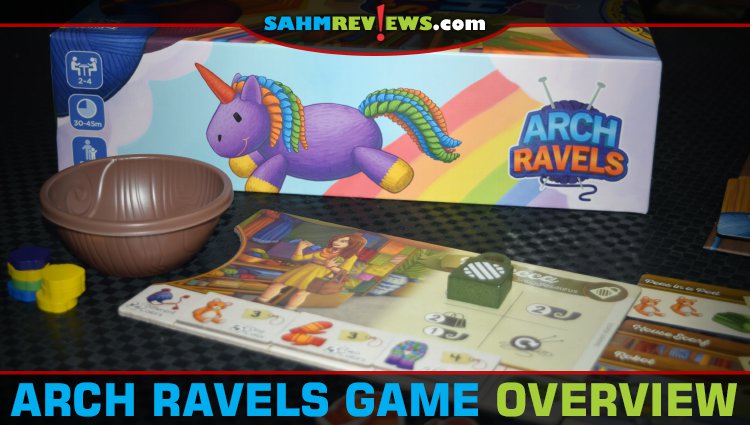 Almost every Sunday, we get together with a couple friends to play games. Sometimes we’ll play a strategy game like Lorenzo il Magnifico or something cooperative like The Crew trick-taking game. But the vast majority of the time we work as a team to conquer scenarios in Gloomhaven. While some players kill downtime by surfing on their phone, one of these friends crochets. I don’t know what all she makes because she usually has it on her lap, but it about broke my brain wondering what she would do if we set up ArchRavels from XYZ Game Labs on the table. We haven’t had a chance to find out yet, but we will because this game is right up her alley. Not just because it has a crafty theme, but because she enjoys this genre of game. Oh, and I suspect she’ll love the fact that she can use it as a gateway to getting her circle of craft friends to play games.

The goal of ArchRavels is shop for yarn, learn patterns, complete projects and be efficient. We’ll start by talking about the setup. Each player has their own player board. There is a main game board that houses the yarn bazaar and project lists along with a tray for neatly storing the various yarn colors and item tokens.

Before I go into setup detail, I want to pause and elaborate on this tray and the player characters. First, the characters are not only diverse in representation, but they’ve also made a point of incorporating subtle cultural characteristics. As an example, the background imagery on one board displays yarn colors that would be common in India because regional spices were used in the color-dying process. With respect to the tray, I’ve played hundreds of games where you create pools and piles of components. I’ve seen a lot of people purchase custom trays, silicone cupcake liners or small condiment cups to keep things organized. That’s not necessary here because a game tray comes in the box. The team at XYZ Game Labs did a lot of research (including having a fine arts consultant and joining multiple crafting Facebook groups) to learn about the crafting world, lingo and processes so they could incorporate those things into the game and it really shows.

So let’s get back to the setup. Each player selects a character then takes the corresponding action marker and one of each color of yarn. Bear, Mitten and Scarf patterns are shuffled individually and each player takes one at random. The remainder are returned to the box. The game tray is placed in the center of the table within reach of all players and the board is set alongside it. Yarn and event cards are shuffled together to form the yarn deck then special request cards (each player’s favorite along with an additional random special request per player) are incorporated into the top half of the yarn deck. The top six yarn cards are added to the yarn bazaar. Special requests and events that show up during bazaar setup are set aside then shuffled back into the deck. A project deck is created based on player count, shuffled then the top three revealed as the project list.

Each player’s character is unique with slight differences in abilities. These asymmetrical characters were the result of the research and is intended to showcase how crafters have different strengths. On their turn, each player takes an action, restocks the yarn bazaar then takes restock actions. The player token is moved to a different action space to indicate whether they’ll shop, craft, exchange yarn or utilize their special abilities. When shopping, the player takes exactly the number of cards designated on that space then collects the corresponding yarn tokens from the tray.

Crafting represents the process of actually knitting or crocheting. In this step, specified colors of yarn are exchanged for the associated object (mitten, scarf, bear, hat or sweater) or special request. Exchange allows players to swap out all of a single color for the same number of a different color. Picture someone dying a batch of yarn to get the same amount of a new color.

After taking actions, empty yarn bazaar spots are restocked with cards from the deck. Any events or special requests must be resolved immediately. Those spaces are not refilled but are instead treated as one yarn of any color.

Events include instructions and may impact the active player or everyone. Some examples are to donate yarn to another player, prevent another player from crafting or everyone can take one yarn from the supply.

Special requests are just like objects, but must be completed before the end of the game with points awarded or deducted accordingly. The active player may either keep the request in an attempt to complete it or give it to another crafter. If a player happens to complete the favorite project identified on their player board, they earn bonus points at the end of the game. It’s important to remember that these special requests are items that need to be crafted using the same action spaces you would for the hat, mittens, teddy bear, sweater and scarf.

Taking restock actions is the third step after player actions and restocking the bazaar. It’s completely optional to do all, some or none of these. The options include finishing a project (turning in the listed items), learning a pattern (so you can make it with any colors) and turning items back in for yarn. This last task is referred to as “Frog it” and it’s the process of undoing a prior project to reclaim the yarn for another task. Upon completion of this last phase of the turn, play moves to the next person.

This is one of the few craft-themed games that have made it to the board game market such as Sagrada (stained glass), Patchwork (quilting) along with a variety of art-themed board games. What makes ArchRavels really shine is the attention to detail. It may look complicated on the surface but a new player can easily walk through the process of the craft to understand how to play the game. The turns are quick so there isn’t a lot of down time between turns. If there’s one complaint, it may be that knitters won’t have time to knit while playing. Thankfully, there’s an Octopus Pattern in the box so I can task her with completing it before returning to our next game day! It’s well put together for the theme so the next time you’re placing an Amazon order, add ArchRavels to your cart for the fine arts fanatic in your life. You can also pick up a copy direct from the publisher or ask about it at your local game store. Oh, and be sure to visit XYZ Game Labs on Facebook, Instagram and Twitter to see what else they’ve been crafting! Keep an eye here, too. I’m sure you’ll be seeing more from XYZ Game Labs here on SahmReviews!

What craft would you like to see incorporated into a board game?