Have you ever played a game and thought to yourself, “This is a really good game.”? Me too. Recently, as a matter of fact. Actually, it happens quite often, but that’s bound to happen when you play 10 or so different games per week. But this time it was different. We had previously played the same game and felt the same way several weeks ago, but this time we were playing with the expansion. It made me pause because sometimes a great thing is great by itself, but it’s also great with a little something added to it. You know, like chocolate ice cream. It’s awesomely delicious by itself, but add chocolate syrup on top and hello, it’s even better!

If you’re wondering what game I’m comparing to chocolate ice cream, that would be Lorenzo il Magnifico from CMON. When we played the base game, we thought it was fantastic. As I explained in our Feudum game overview, sometimes it’s important to get a full grasp of the base before causing confusion with expansions. When we played Lorenzo il Magnifico the first time, we had a solid grasp of the game by the time we finished final scoring. So the next time we sat down to play, we added Lorenzo il Magnifico: Houses of Renaissance expansion which included several new twists and turns. I can honestly say that I don’t know if we’ll play the base without the expansion ever again. It’s an excellent game by itself, but even better with the proverbial chocolate syrup on top. 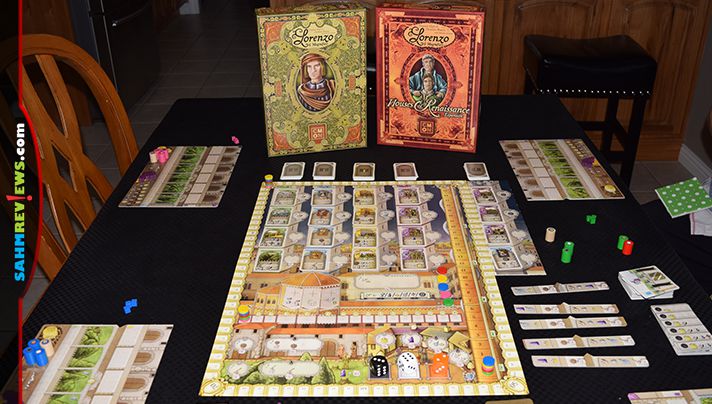 While talking about chocolate is always nice, let’s change the topic to royal families. Don’t worry, I’m not going to rant about Kate or Meghan or their Prince husbands. I’m talking about how you can take on the role of nobility yourself. That’s what you’ll be doing in Lorenzo il Magnifico as you gather resources, collect various cards and carefully balance your actions to ensure your family isn’t excommunicated. Let’s get started by talking about the setup process. Like many strategy and worker placement games, Lorenzo il Magnifico has a bit of setup required. To begin, each player selects a color of their choice which includes a personal board and various action and tracking markers. The round discs are used for tracking victory points, Military Points, Faith Points and Turn Order. The cylinder pawns represent Family Members, each identified by their color marking on the top. Community piles of wood, stone, coins and servants are set up alongside the bank. Development Cards are sorted and shuffled by period and type then set next to the top of the board for easy access when they are reset each round. 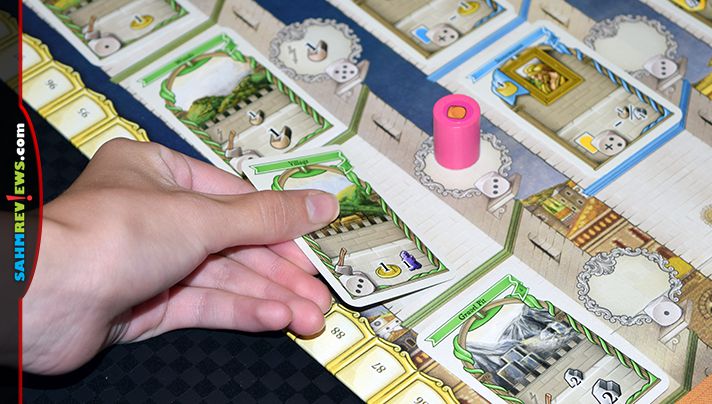 There are different types of “currency” in Lorenzo il Magnifico including dice value, wood, stone, servants, coins and Military level. Throughout the game, you will be working to purchase Development Cards which is ultimately how you earn victory points. They’re available from the top portion of the board depicted by a building with four floors. The cost of each card is noted by the image of a die next to it. The ones on the first floor each cost 1 pip, with each of the others increasing in cost by two each time making them 3, 5 and 7 on the second, third and fourth floors respectively. In addition, some have a cost designated in the upper left of the card. And in case it sounds like you’re paying paying paying, it can get even more expensive. If you’re the first one to purchase that color of card for the round, you pay the costs on the card and the image. However, if someone has already purchased one of that type this round, you’ll need to pay an additional 3 coins. There are various ways that you can earn money and resources to pay for your purchases, but it’s important to note that resources are tight and you won’t necessarily be able to afford the cards you want. But it’s not just about money and resources. Some cards cannot be purchased until you have reached a particular level on the Military Point track. I’ll get back to what happens with the cards when you purchase them. 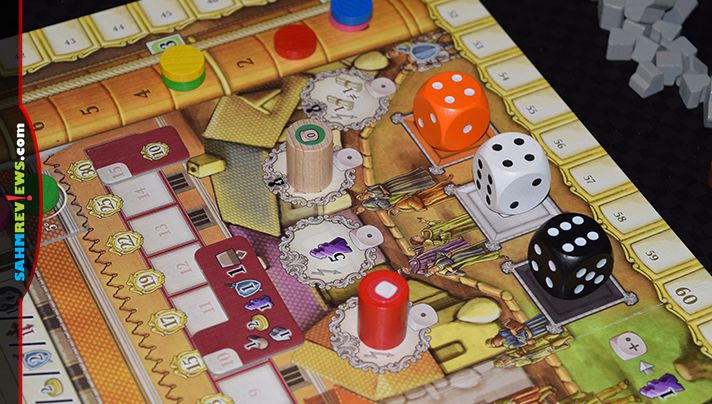 One of the interesting mechanics of this game is that dice are a form of currency based on the number of pips that are displayed. At the beginning of each round, the first player rolls the dice to determine the value of your various Family Members for all players that round. The cylinder denoted with an orange dot corresponds to the orange die, the white dot goes with the white die and the black dot matches with the black die. So each Family Member has a value based on the die of the same color. As I mentioned before, the most expensive level of the building has buildings that cost 7 pips. Since the dice only go up to 6, you might be asking how you can afford something that costs 7. While I mentioned before that you can earn money and resources for your purchases, one of the available resources is a servant. To achieve this extra pip, you spend one of your servants. For that matter, you can increase the value of any die by using your servants. With the dice as a variable form of currency, this makes every game very different. 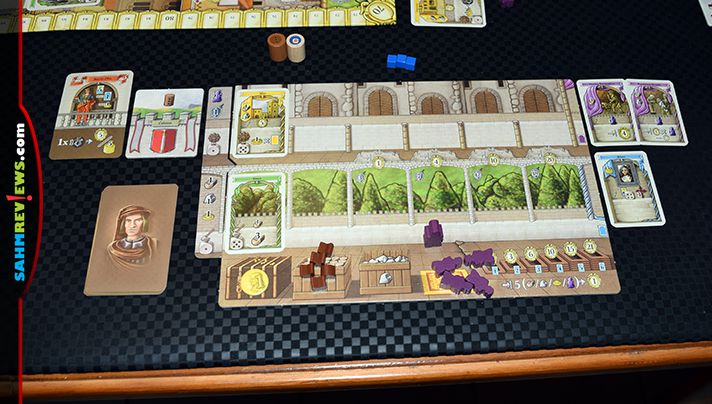 As I previously said, Development Cards are how you earn victory points, but they’re also a way to earn resources and even get discounts on purchases. The four types of cards represent Territories (green), Buildings (yellow), Characters (blue) and Ventures (purple). As you purchase them, you’ll place them on your personal board in their designated spots. Green and yellow cards, once purchased, can be activated by placing your Family Member in the corresponding Harvest and Production spaces on the board. Blue cards have immediate or ongoing effects such as making a die worth more or something costing a coin less. Purple cards are always end game scoring. 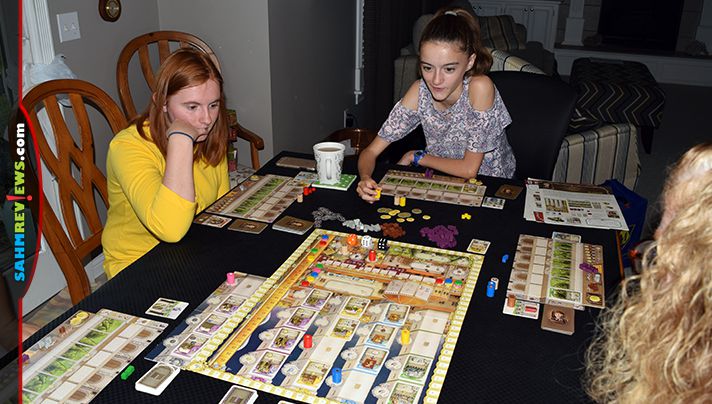 In addition to the Harvest and Production spaces on the board I just mentioned, there are other spaces on the board that offer additional options. The Council Palace dictates player order (first one there is the first player for the next round, second is next, etc.) along with giving you one additional Council Privilege of your choice (such as coins, military, Faith or resources). The Market allows you to receive coins, servants, military and Council Privilege. But amidst all the building, harvesting, producing, privileges and everything else, you also need to worry about your level of Faith within the church. If you don’t maintain a certain level, you’ll be excommunicated and have penalties in future rounds. 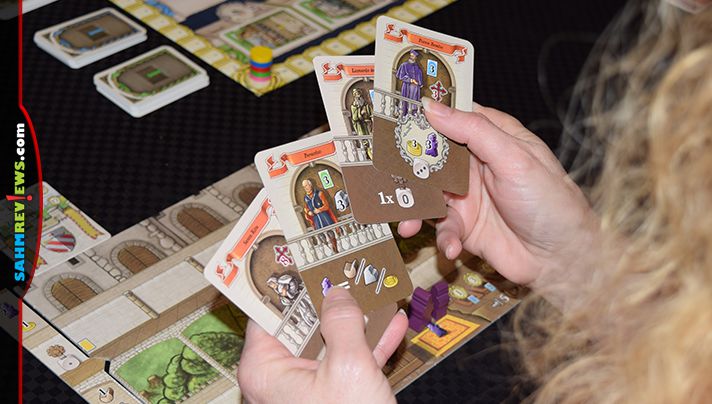 The base game includes advanced play options such as variable resources and the addition of Leader Cards. These cards vary in type and may include special abilities or actions. When we started this conversation, I was talking about how we’ve permanently added the Lorenzo il Magnifico: Houses of Renaissance expansion to our base box. Not only does it include additional Leader Cards but it also offers additional Development Cards, another wing to the building (making it 5 rows to pick from instead of 4) and family specialties. Each of these changes provides additional paths for players to focus. While Lorenzo il Magnifico by itself is a fantastic game, the expansion gives is a lot more diversity. It allows you to play it over and over without the game feeling like it’s always the same.

Lorenzo il Magnifico is another great game from CMON and rings up at under $45 on Amazon. Ideal for players who enjoy worker placement games with the Lorenzo il Magnifico: Houses of Renaissance expansion available to add more life to it. I encourage you to check out the many other CMON games we’ve featured including Gizmos, Dragon Castle (which recently appeared in our guide to games for teens and adults), Way of the Panda and The Godfather: Corleone’s Empire. Find out what other games they have in the works by following them on Facebook and Twitter.

How many times will you play a game before you look at an expansion to it?