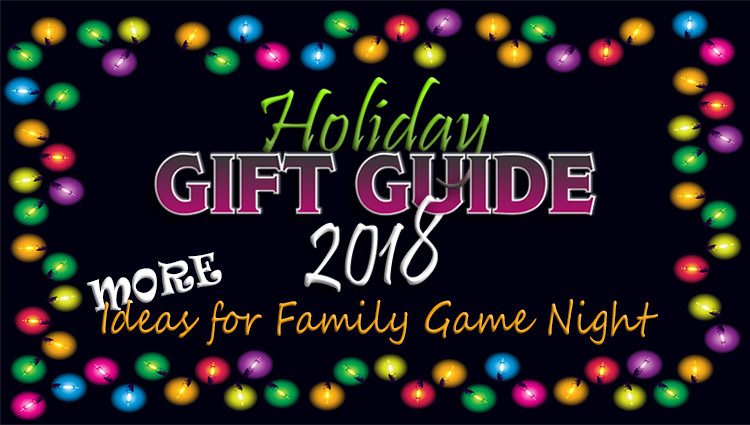 When we put together our annual guides filled with gift ideas, we put an emphasis on games because that’s something we’re passionate about. Aside from the educational aspects of games, we think they are great for family bonding and socializing. Among the first guides released this year was our list of family games, appropriately titled as such, but with “Part 1” added for good reason. We had more we wanted to share about. Lots more. So it only made sense to tag this list as “more family games” and “part 2”. As with the first installment, we feel these are games that can be interesting as well as challenging for all ages. Speaking as a parent, there’s nothing more frustrating that trying to remain positive – and awake – while playing a game that is so mind-numbing that you can barely keep your eyes open.

Of course, watch for the

logo to gain more insight into the games we’ve previously featured. You can read more about how the game is played, how it fit into our schedule and whether your family would enjoy it like we did. 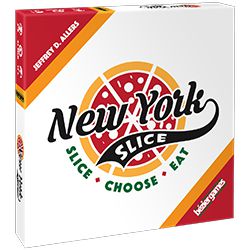 In New York Slice™, each player slices pizzas into portions, giving your opponents first choice, with you getting the leftovers. There are a dozen kinds of pizza to work with, from Veggie to Hawaiian to Meat Lover’s, and each player decides if they want to eat or keep some of the slices, building the best collection of pizzas possible! 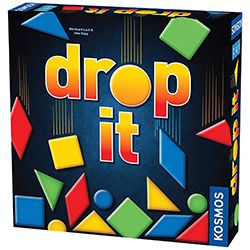 This colorful, inventive family game is easy to learn but deceptively mind-boggling! One at a time, each player drops a shape into the vertical game board’s drop zone. Players earn points for the highest level that their shape reaches when it lands and extra points for touching bonus circles. But be careful: Don’t break a landing rule! The shape you dropped is not allowed to touch matching shapes or colors after it lands. If you break a landing rule, you will go away empty-handed. The winner is the player or team with the most points at the end. MSRP $29.95; ages 8+ 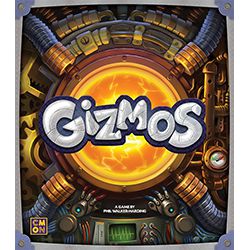 In Gizmos, players look to create the most magnificent of machines, taking on the role of inventors at the Great Science Fair. By utilizing four different types of energy marbles, taken from the innovative 3D marble dispenser, they will purchase and construct new additions to their Gizmos. The best Gizmos will be able to chain-reaction off of new additions as they’re made, giving players multiple results from taking a single action. The player that builds the greatest machine and collects the most victory points is declared the winner. 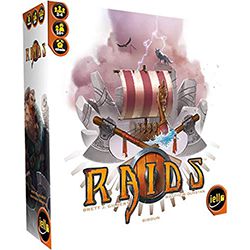 Get ready for a voyage on the high seas! Prepare your crew and steer your Longship to the best locations to discover the most treasure and earn the greatest glory! The player with the most points at the end of the fourth Voyage wins the game. 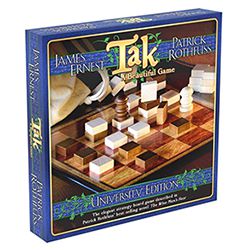 Tak is an elegant two-player abstract strategy game reminiscent of classics like Go and Mancala. First conceptualized in bestselling novel The Wise Man’s Fear by Patrick Rothfuss, it has now been brought to life with the help of award-winning game designer James Ernest. The University Edition of Tak features a smaller set of pieces as well as a cloth bag, making Tak portable and compact. 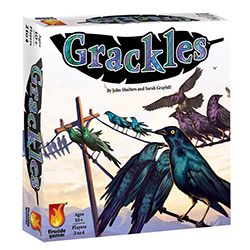 Grackles are iridescent birds that love to gather on telephone wires at sunset throughout the southwestern United States. In this lightly themed abstract strategy game, you’ll line up your birds on the telephone wire to score as many points as possible. Each turn, players choose between drawing and placing a tile, connecting 2 spots on the telephone wire with their birds, extending a line of birds, or rotating an empty tile. Fun for all ages. 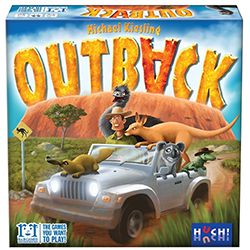 DEEP IN THE AUSTRALIAN OUTBACK, the rangers need your help relocating animals to safer ground.

Only with lucky dice and a strategic assortment of animals
can your preserve have the chance to win! 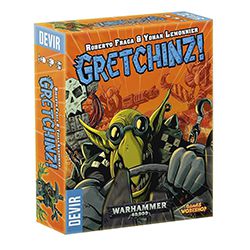 The greenskin’s passion for speed and violence is known throughout the galaxy. It is not uncommon to see little crowds of Orks from different klans take any excuse to launch their best Gretchinz into insane races where they pilot buggies which have been slapped together with whatever is at hand. Firepower and speed are far more important than the safety of the racers when it comes to the design of such contraptions. 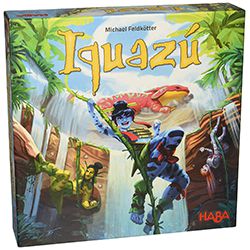 Players bravely navigate the dangerous land to keep their gemstones safe. Repelling down behind the great Iquazu waterfall you must skillfully play your cards to place your gems in the most bountiful spots. But only the right cards in your hand will allow for this. A game of majorities, both vertically and horizontally, to win the most points! 2 to 4 player area control game featuring a moving 3D board! 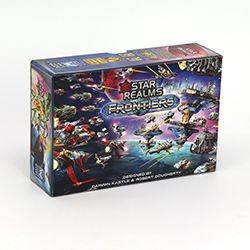 Conquer the new frontier! Powerful warpgate technology has opened up a distant frontier, ripe for conquest. Establish your Star Realm with powerful new ships and bases! This new game in the Star Realms line supports 1 to 4 players right out of the box. You can play a 2-player dule, or have a battle with 3 or 4 players. Or try the oversized “challenge cards,” which allow you to play solo or cooperatively. 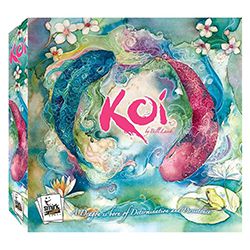 Koi is a beautifully elegant, almost zen-like, strategy game for 1-4 players. You are a Koi fish, swimming to and fro around the pond and looking to gobble up delicious dragonflies and frogs. Beautify the board with lily pads, stone and cherry blossoms, creating new challenges for the other fish. 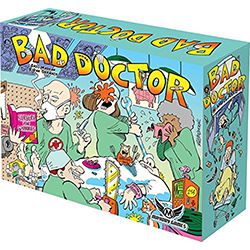 Bad Doctor is a light tile laying game for 2-4 players where you assume the role of doctors in Central City Medical Center – an overcrowded and understaffed hospital. As an overworked doctor in this terribly understaffed facility, your job is to keep patients alive until your shift ends. As you make your rounds during your shift, make sure you visit as many patients as you can or risk them kicking the bucket while you’re in charge. If you’re a good enough doc you might even cure someone and take credit for saving a life! But sometimes treating a patient can actually cause complications future doctors might have to deal with – that’s their problem once you’re off the clock! 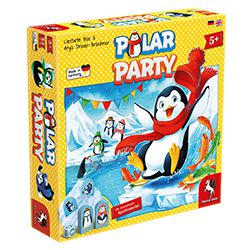 The little penguins hold a Polar Party. They do their best to collect as many fish as possible for their secret fish stash. Watch out – the parents are already on their way home and Whale Wilbur is trying to get his teeth on the fish. The penguin to have caught the most fish by the end of the game is the secret Party King! 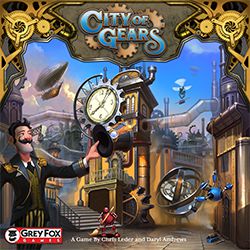 City of Gears puts players in the role of companies trying to rediscover and restore a long-lost steampunk city. Using steam, gears and zaps, players will battle for control all while ensuring they have the most prestige when Opening Day arrives. With more than 20 city tiles and only nine used each game, each city you uncover will be truly unique! 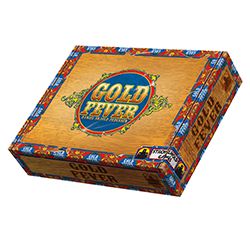 Gold Fever is an exciting, push-your-luck game that’s so highly portable you don’t even need a table to play!

Gold Fever is a fast, family/party game for all ages. The winner is the first player to draw five gold nuggets out of their bag. But if you keep digging gold too long, you risk drawing so much gravel that you may lose it all! The game offers fun decision-making and a short playing time. 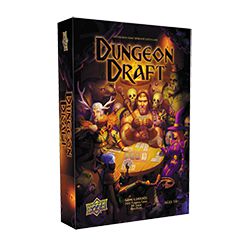 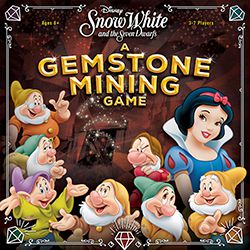 Play Disney’s Snow White and the Seven Dwarfs Gemstone Mining Game and push your luck as you collect valuable gems from the mine and earn bonus points by discovering gem combinations from Snow White objectives. Based on the popular Quartz game play by Passport Studios.

In Nyctophobia: Vampire Encounter, you attempt to outrun and outsmart a vampire who is hunting you. The forest is a dark and lonely place. Players must blindly navigate it while wearing blackout glasses, trying to find and rescue their friend — “the familiar” — who the vampire has kidnapped and hidden in the forest. Only the vampire can see what’s going on around them. The hunted players have the navigate the board through touch and memory only! 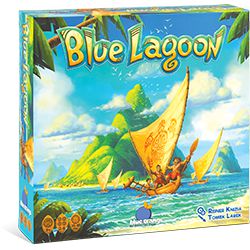 Blue Lagoon is an area control and set collection game in which players manage a group of settlers spreading out over the islands of a newly discovered archipelago.

Players expand their presence on the board by adding a settler or a village token each turn, during the exploration phase, followed by the settlement phase.

It is simple to learn and involves a great amount of strategy in how to manage the various scoring conditions. 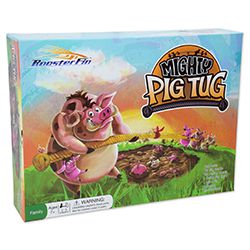 Mighty Pig Tug™ is the wild game of pig tug-of-war. It’s the most prize championship of the year. The pigs, large and small, come together to test their strength against other pig teams in competition. Each player must build the best three-pig team, but watch out, pigs can be quickly pulled into the mud. It’s a simple strategy card game that suits all ages, from kids, teens, college students, parents, and grandparents.

Robots on the Line 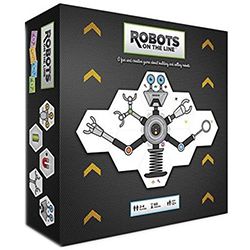 You’re one of the lucky factory workers invited. Your job? Pick refurbished or out-of-date parts to build robots that meet eager buyers’ requirements. Sell your completed robots to win even more money to fund your fledgling business; but hurry, because other players may be building a robot to sell to the same buyer first. Can you outsmart your opponents and assemble a robot with six eyes and four hands before they do? 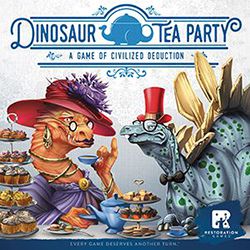 A game of civilized deduction. It’s high tea, but there’s just one problem. You’re a dinosaur, and with your walnut-sized brain, you’ve forgotten everyone’s name. Ask the right questions, and you just might be able to figure it out before they serve the shortbread. 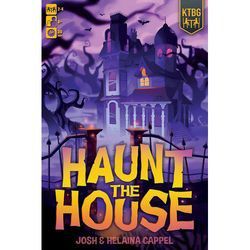 Haunt the House – Play as ghosts competing to scare Ghost Hunters out of the Rooms of our haunted house and collect their exploration gear as trophies.

The Table is Lava 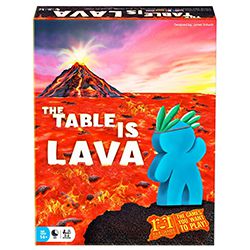 IF YOU CAN’T STAND THE HEAT, STAY ON THE ROCKS!

As dawn breaks, Mount Kahlualualuau is spewing its fiery lava down onto Meepleville. The natives are frantically trying to escape the rivers of lava and remain on safe ground. Whoever’s tribe survives the eruption with the most meeples shall be the winner!

If something really interests you, read more about it and grab a copy for your family or someone on your shopping list. Be sure to check out our other gift guides for more ideas, too. As always, watch the daily giveaways to see if it shows up as one of the prizes! 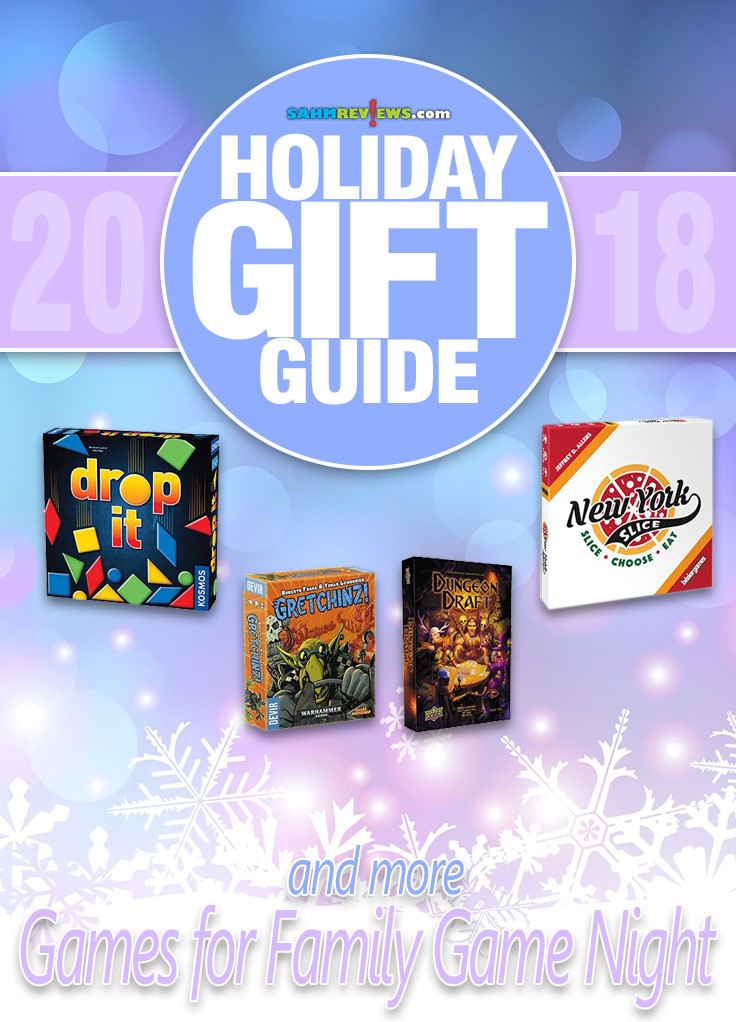