As Scott has mentioned over the past couple weeks, we’re trying to provide more details on some of the games featured in our holiday gift guides. Sometimes it’s difficult to make a purchasing decision on a one-paragraph description. While I like to believe I’m on top of current game trends, I don’t always look at games through a microscopic lens. As a mom, I evaluate whether it’s an ideal game for family game night, if it’s a good game for young kids or a game to get teens and adults together. The educational aspects of games are something I always consider because even though we don’t homeschool, we recognize that games can make difficult concepts in subjects like history and science a lot easier to grasp. What I don’t typically harp on are the specific mechanisms that make up a game. Yes, I’ll tell you it’s a dice game or perhaps that it’s a speed or dexterity game but I don’t go into too much detail beyond that. While we have a lot of gamers who read our site, we also have a lot of moms. But I’m going to break protocol a little and talk about how Root by Leder Games is an asymmetrical game. While Disney Villainous game was also very asymmetrical with each player having different conditions for actually winning, the general game play for each person was the same. So when I talked about the game, I could speak in generalities that made sense. That isn’t the case with Root. It’s all pretty different for all players… and that’s what makes this such an excellent game. 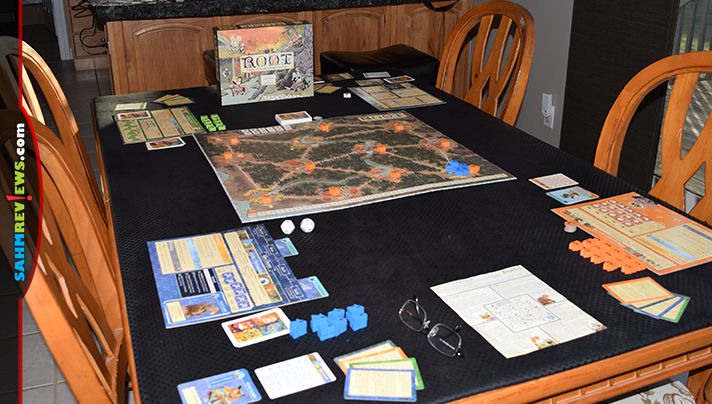 Root is a game about life in the woodlands and the factions that live there. As in the circle of life, each faction has a function to build, maintain and protect the ecosystem. Because each has a different purpose, all players have different types of actions AND each has a different criteria for winning. My goal isn’t for this to be a walkthrough of the game so don’t expect to use this for questions and answers. Instead, the overview will give you an idea of how it’s played so you can see if it would work with those in your gaming group or family. There are four primary factions: Marquise de Cat who wishes to utilize the resources of the land to improve her economic and military intentions. She earns victory points by constructing buildings. The birds of the forest are called the Eyrie Dynasties and score by constructing and protecting roosts within the land. The Woodland Alliance has a goal to unite creatures of the land and earn points by spreading sympathy for their cause. Finally, the Vagabond lurks in the shadows amidst the conflict, thrives on chaos and scores for helping or harming the other factions. 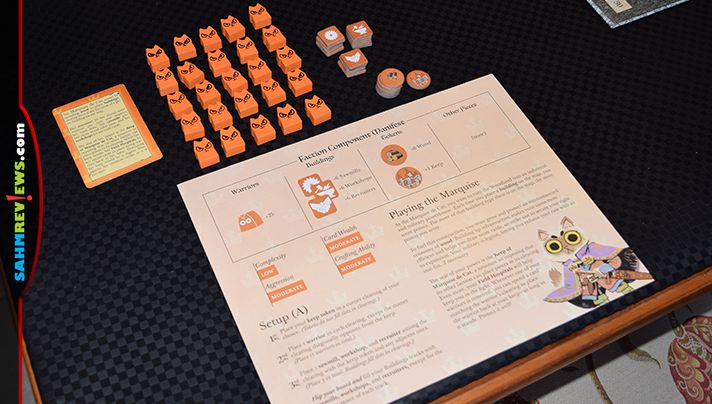 Each player selects one of these factions and takes the respective board and player pieces. On the back of each player’s board is a listing of their components and some details about the faction. Each player also takes multiple reference cards that explain the various factions. In a normal game, the shared deck is shuffled and 3 cards are dealt to each player. Ruins are placed in the marked spaces then make a supply pile for the item tokens and the game is off and running. However when you are first learning, there’s a walk through of the first two rounds which includes a specific (less random) setup process to help each player learn how to play. 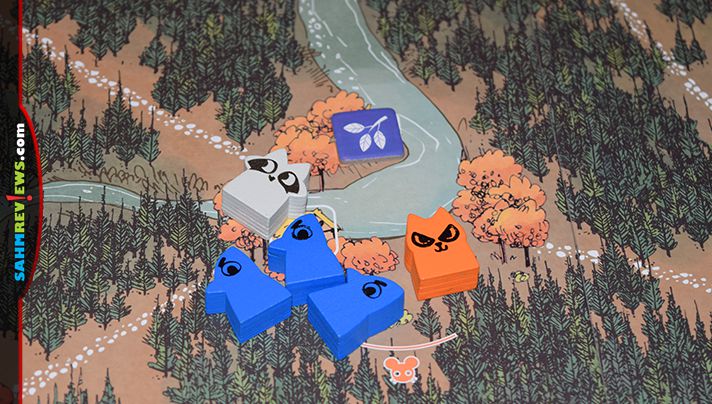 Each of the clearings in Root is home to a particular species (they call it a Suit) and will be represented by a fox (red), rabbit (yellow) or mouse (orangish-brown). Movement in Root is unique in that there aren’t dice or cards. Most alliances move from clearing to clearing along the pathways while the Vagabond is able to sneak through the forest. You’re able to move as long as you have control of the area you are moving from or wish to move to. This means you’ll need to establish a stronghold or battlefront and cannot just randomly scatter pieces across the board. 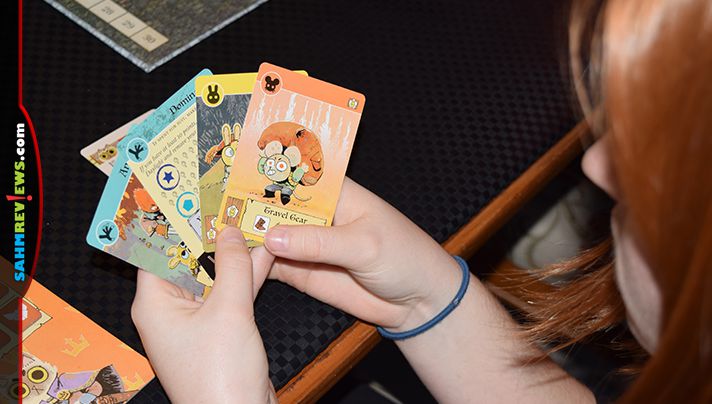 Throughout the game, you’ll be drawing cards which have symbols across the top that correlate to the various Suits in the clearings. In addition to the three mentioned above, you’ll also find birds as a fourth card Suit. Birds are free to fly across the entire land and aren’t limited to a specific clearing so they’re considered wild cards. Across the bottom of the cards, you’ll also find a secondary action or Crafting option. Spending cards matching a particular Suit means you are enlisting that creature’s assistance in your efforts.

Each turn involves a multi-step process which involves a Birdsong phase, Daylight phase and Evening phase. This is where the asymmetry is most apparent. Each player has a different series of actions available. As an example, the Birdsong for the Woodland Alliance is when that faction may Revolt in order to remove enemy pieces from their clearing or by Spreading Sympathy to place tokens on adjoining clearings. Their Daylight phase allows them to Craft, Mobilize and Train while their Evening phase is when they Move, Battle, Recruit and Organize. In contrast, the Birdsong for Marquise de Cat is to place a wood token on each of sawmill that faction has built. In Daylight, that faction may battle, move, recruit warriors, build and collect wood. The Evening phase for Marquise de Cat is nothing more than drawing cards into their hand then resetting down to the hand limit. 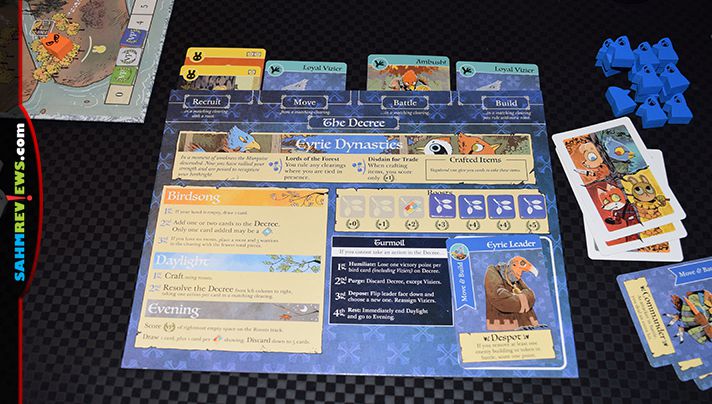 The Eyrie player actions are even more unique in that they’re limited by cards they have loaded into an area above their personal player board. This area is referred to as their Decree and these cards placed here act like a computer program.  working from left to right. If the Eyrie faction is unable to complete actions, they fall into Turmoil, clear their current Decree of cards, select a new leader card and begin to establish a new Decree. As you can see, not only do each of the factions have different action options and objectives, but they also have different play processes! 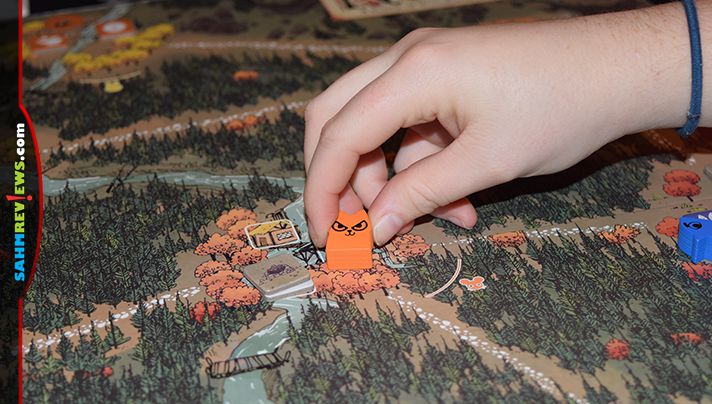 While each player can focus on achieving their own objectives and try to play a fairly clean and conflict-free game, our experience is this lends itself to a dry and predictable finish. Ultimately, you need to find some degree of balance between working on reaching your own goals and preventing another faction for easily scoring points. How many times have you played a game only to be tired of the same ol’ same ol’ then retire the game to the back of the shelf? A lot, I’m sure. Not only do these variable actions between factions mean the game is a delicate balance of power, but it also means you can play the game multiple times with a different mix of players and factions and not have the same experience twice.

I encourage you to visit Leder Games for more details on the game and follow them on Twitter and Facebook to find out what else is in the pipeline. You can pick up a copy of Root on Amazon or at your local game store. When you feel like you’ve experienced enough of the existing factions, you can grab Root: The Riverfolk Expansion to add two new factions, new vagabonds and more game modes!

What are your thoughts on games that have vastly different character options and actions?