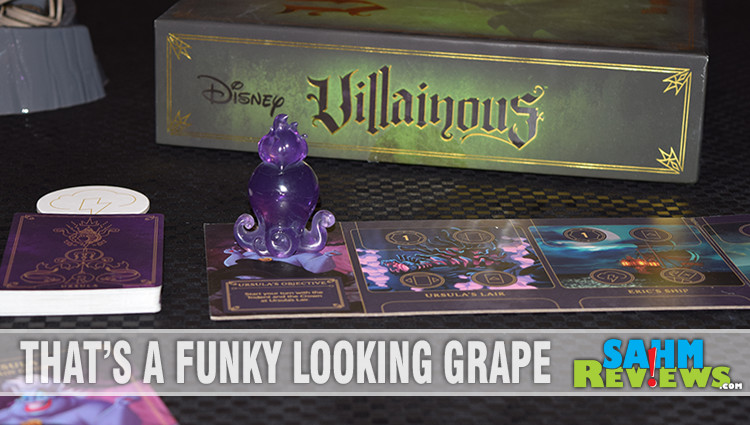 As Halloween approaches, costumes are hitting store shelves and pop-up stores are showing up in strip malls. Every year, we can bet money on what characters will be knocking on our door come October 31st. The latest blockbuster movies, TV shows and video games are sure to be heavily represented. There are also a handful of homemade costumes that make their way around the block. Then there are the tried and true costumes that never fall from grace. You know the ones – Disney Princesses and Heroes. Not only are they characters that everyone loves, but they can also be passed down to siblings without feeling outdated and stale. Isn’t it every young girl’s wish to grow up to be a princess, meet her Prince Charming and have a fairytale wedding and life? But what about the villains? Does anyone care about them? Let’s just say that they aren’t given their fair share of shelf space.

While villains aren’t the headline act, they do have a special place in stories. You cannot have a hero without an antagonist. The princess wouldn’t need to be saved by Prince Charming if there wasn’t someone or something to save her from. Wonder Forge embraced the concept and gave these ill-fated characters their very own board game, Disney Villainous. 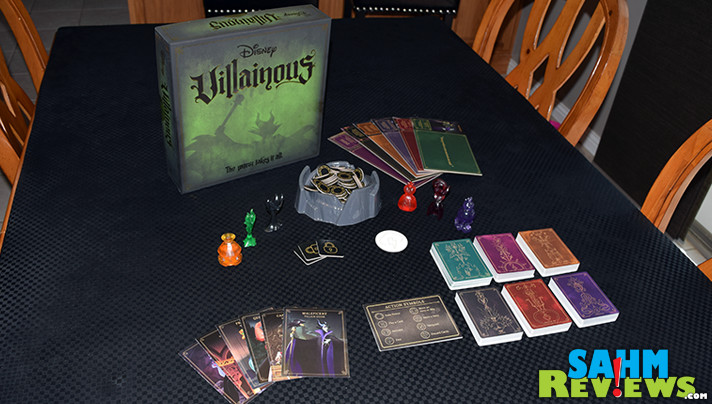 Villainous is a strategy game where up to 6 people work take on their favorite baddie and work to achieve their designated objective before anyone else. With a stack of 30 Villain cards to support you and only 15 Fate cards to cause you to stumble, how hard can it be? From what you know of how things transpire for villains, I’m guessing you already know the answer to that. Each player selects a villain (Captain Hook, Jafar, Maleficent, Prince John, Queen of Hearts and Ursula) then gathers the respective board, Villain Guide, Reference Card and the two previously mentioned decks. Each villain’s board is set in front of the player with the deck of villain cards to the left and the fate cards to the right. There should be space above and below the board for placing cards. Fill the cauldron with Power Tokens and put it within reach of all players. Some boards reflect a lock symbol in the right space. Add a lock token to that space before beginning the game. 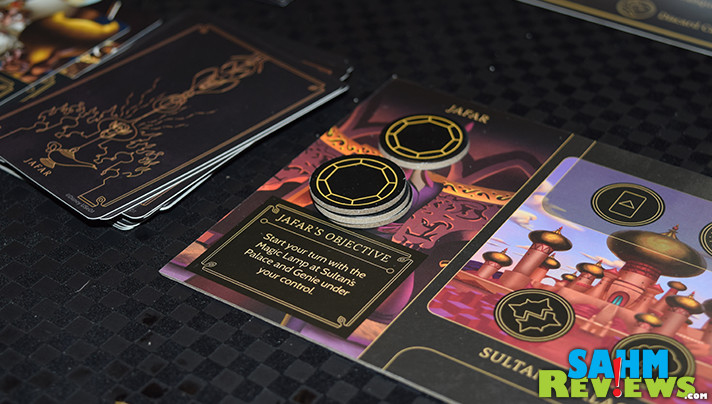 The goal is be the first to achieve your objective which is done by playing cards in your own realm while preventing others from reaching their objectives. Every villain has a different goal so you have to familiarize yourself with your opponents’ needs so you know when they’re getting close.

Within the two decks, you’ll find a variety of types of cards including Allies, Heroes, Items, Effects and Conditions. If the card has a cost, it will be displayed in the upper left. Allies and Heroes have strength points which are displayed in the lower left of the card. When a Hero is played from the Fate deck, it will take Allies with equivalent or greater strength to defeat it. Item cards provide benefits to other cards or actions and to an Ally or Hero when attached to it. Effect cards do as the name implies whereas Condition cards can only be played during an opponent’s turn. 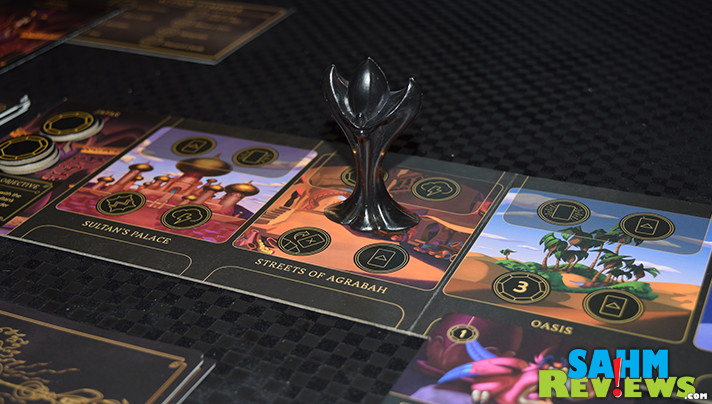 On your turn, you’ll perform three steps. Move your villain to a different space in your realm. Once there, you may perform all the actions that are visible in any order. You’ll wrap up your turn by drawing cards. There are 8 possible action options: (1) Gain Power tokens (2) Play any card from your hand by paying the cost using Power tokens (3) Activate an Item or Ally in your Realm and pay any related cost (4) Perform a Fate action on an opponent. (5) Move an Item or Ally to another space in your Realm. (6) Move a Hero to an adjacent location in your Realm (7) Vanquish one Hero at any location in your Realm by using Allies at the same location and (8) Discard cards from your hand so when you replenish at the end of your turn, you’ll hopefully get something more useful. 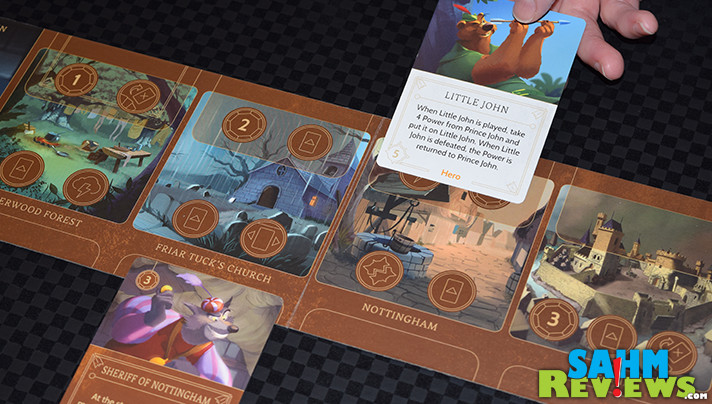 What is interesting about Villainous is that each realm is kept true to the story and characters. You won’t see Tinkerbell hanging out with Maleficent as an example. In order to impact another player, you’ll take the Fate action, draw two cards from THEIR deck of Fate cards and play one. The card you select is played on the top portion of their board whereas their own cards are played below it. The first thing you’ll notice is that Fate cards overlap some of the actions. Until that Fate card is removed using the Vanquish action, those hidden actions can’t be used. In order to Vanquish someone, you’ll need to meet or exceed the strength of those Heroes/Items by utilizing your own Allies/Items in the same location. 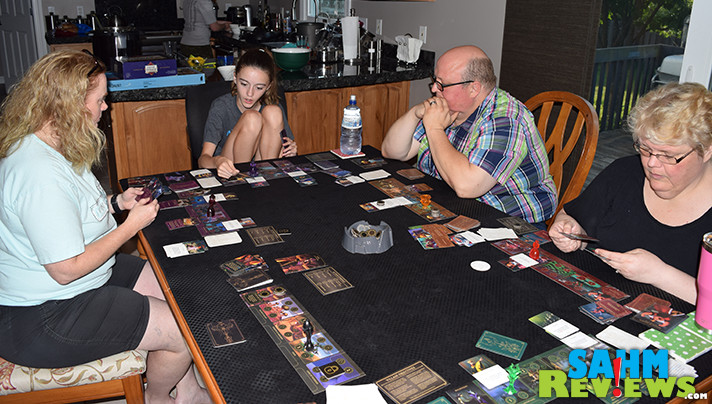 You’ll continue the turn process until one player meets their objective then the game ends immediately and as I mentioned before, each Villain’s objective is different. The game is well balanced and interesting and appeals to regular gamers as well as Disney fanatics. The best part is that there’s no lack of Disney Villains so the opportunity to expand this game is immense. I’m hoping Wonder Forge regularly releases new villain packs to ensure the game stays fresh. Right now, you can log onto their website and vote for the Villain you would like to play! The game sold out during Gen Con and the buzz makes it difficult to find in stores right now. It’s currently available on Amazon for less than it costs our family to see one movie! Be the first to hear about Villainous expansions as well as their other games by following Wonder Forge on Facebook and Twitter.