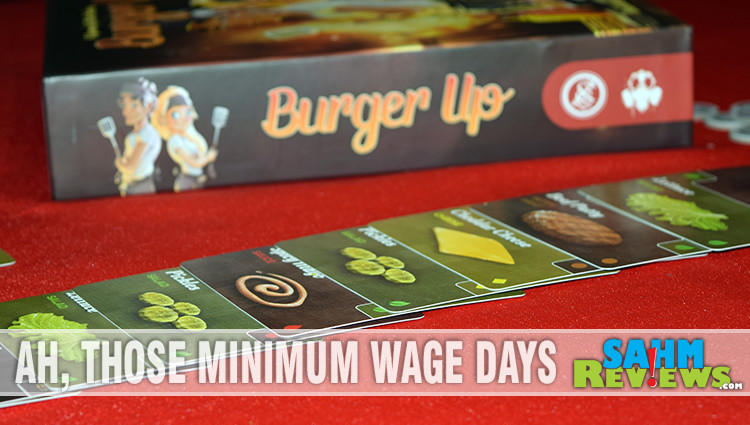 This school year is a special year in our household. Our oldest daughter turns 16 this year and this has spurred a number of new conversations at dinner. Homecoming, boys, driving, boys, cars, boys…you get the idea. A couple weekends ago we visited a number of local dealerships to see what they had to offer in the way of inexpensive new cars and maybe a little fancier used ones. Of course I had to remind her that with a new car comes responsibilities.

I’m not just talking about driving safely, not using your cell phone and changing the oil regularly. I’m referring to the fiscal responsibilities that come with car ownership. Not only will she be responsible for her own gas and maintenance, she’ll need to foot the bill for her own insurance and a portion of a car payment. Faced with this realization, the conversation quickly turned to getting an after-school job.

My first job was flipping burgers at a Tastee-Freez in Illinois. Everything was made-to-order, right down to the french fries. I don’t know if it was because the owner wanted everything served fresh or because they wanted zero waste. Either way, I became an expert in flipping with one hand, dropping fries with another and dressing the hamburger bun with a third. Yes, it felt like I needed a third hand to keep up!

I hadn’t thought too much about those long, greasy days until we recently sat down to play a copy of Greenbrier Games‘ Burger Up card game. Named after the familiar call from the kitchen, “Burger Up!” (ours was “Order Up!”), this game challenges you to use the freshest ingredients to make the biggest and best gourmet burgers around. In the process you’ll upgrade your restaurant and be on your way to being the best in town!

You and up to three other players will put on your aprons as you construct ever-growing burgers using only the ingredients in your hand. All players begin the game with four ingredient cards, randomly dealt from the deck of 72. Each card depicts two ingredients, which will come into play in a minute. You’ll also begin with two plain Bottom Bun cards, $2 worth of coins and a Spatula Card. Three Pending Order cards are dealt and set in the center of the play area with $1 on top of each one. Three additional Ingredient Cards are also put into play in the center, forming a market area. 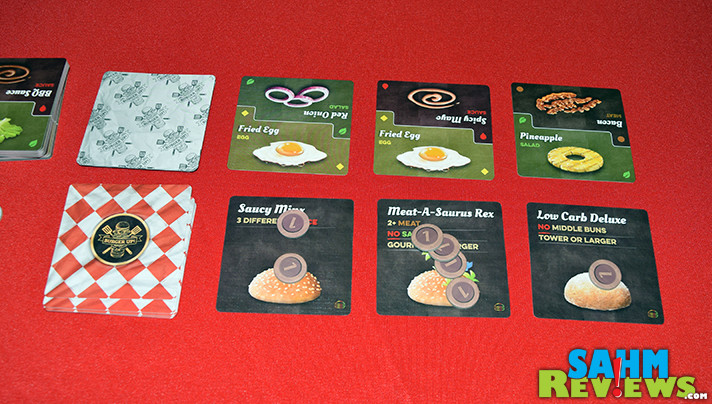 On each of your turns in Burger Up you will perform four actions in order. First you go to market and purchase any additional ingredients you would like. Each Ingredient Card costs $1 and you may purchase as many as you wish. After you are done shopping, it is time to begin (or continue) working on your burgers. There are four types of burgers you can build: sandwich, gourmet, tower and colossal. Each is larger than the previous and gives you a greater reward when completed. 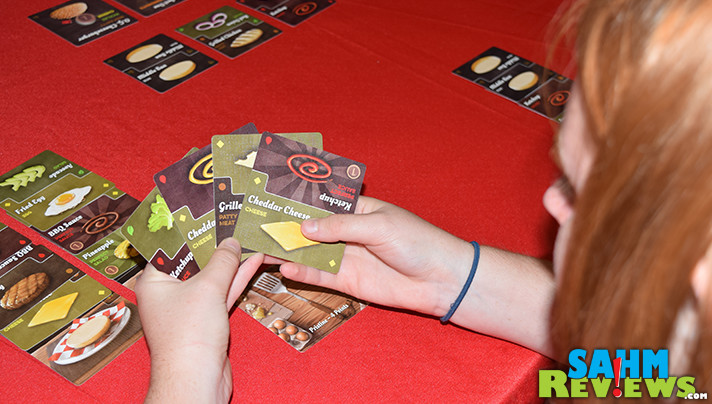 You may place your ingredient on either burger stack as long as you follow one simple rule – the ingredient you place must match the called-for ingredient on the previous card. You may rotate the card however you see fit, but once placed, it may not be changed. On your turn you may place up to three Ingredient Cards onto either or split between both of your creations. 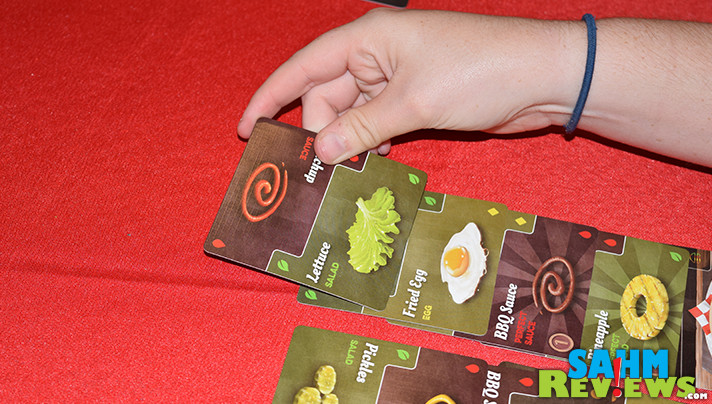 During the next phase, the Burger Up phase, you may score a single burger if it meets the requirements of one of the Top Bun cards in the pending orders area. These may limit you to no meat (vegetarian), 3+ perfect ingredients (using 3 Ingredient Cards with a coin symbol in the lower left of the card) or even three different sauces (Saucy Mix)! Depending on how many overall ingredients you use (not counting the buns), you will receive between $1 and $10 for your work or even upgrade your kitchen! Upgrading allows you to flip over your Bottom Bun cards. This allows you to now play four ingredients per turn instead of the normal three. Keep the Top Bun card and return all Ingredient Cards to the discard pile. 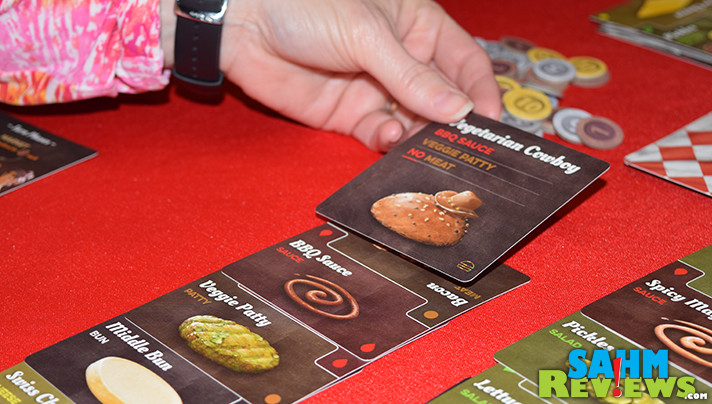 Lastly is the Cleanup phase. Refill any Ingredient Cards in the market back up to three. You may discard as many cards from your hand as you wish and then draw back up to four (or discard down to four if you have too many). This ends your turn and the player on your left begins theirs. 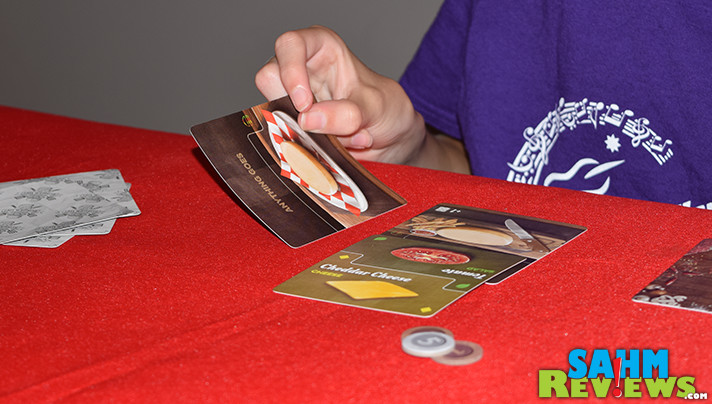 At the beginning of the game you received a Spatula card. This can be used twice during the game (flip it over to the dirty side after one use and discard it after the second) to move a single or stack of Ingredient Cards to your other burger or to the discard pile. This may be necessary if the Top Bun cards (orders) just aren’t in your favor! 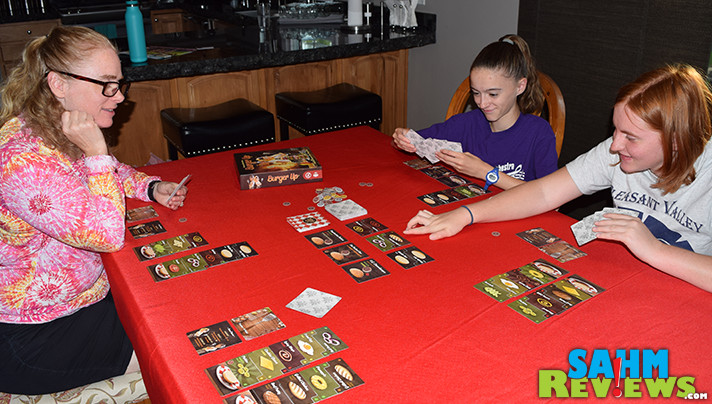 When the Pending Orders stack runs out and there are less than three remaining Top Bun cards, the game ends after the current round (so all players have the same number of turns). Total up your score by counting your money (1pt each) and adding either 4 or 2 points if you still have your Spatula card (depending upon which side is still face up). The chef with the highest number of Top Bun cards in their possession also receives a bonus of five points, but if there’s a tie, no one receives any bonuses. The player with the highest overall point total wins Burger Up!

Ringing up at under four hours of minimum wage fast food work, Burger Up is a cute example of a recipe-filling game with a theme that will appeal to most. Check out what else Greenbrier Games is cooking up by following them on Facebook or Twitter. Their latest project is literally out-of-this-world!

Have you ever worked in the fast food industry?