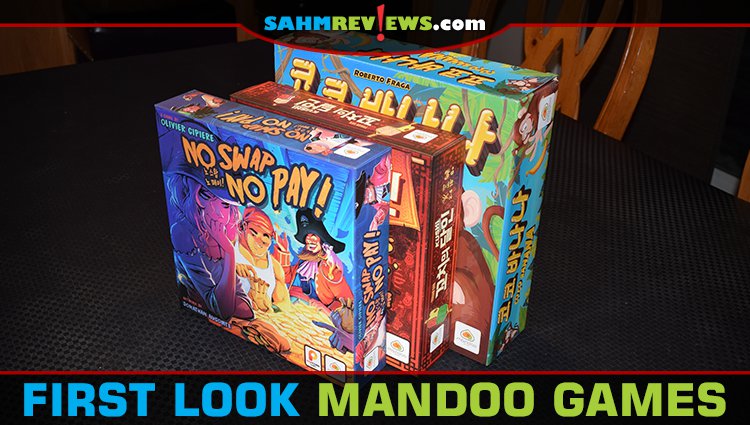 Great games come from everywhere. Europe, specifically Germany, is the home to some of the best designers of what are referred to as “Euro Games”. If we had to select a champion of party games, the U.S. would probably come out on top. There is another region of the world where we have noticed a number of speed & dexterity games originating from – South Korea.

A couple years ago we highlighted a few titles by Nice Game Publishing / Korea Board Games. One card game in particular is still our favorite to bring to game night – Spoil Me Not! Yummy Yummy Pancakes was picked up by our friends at Mayday Games and officially released in the U.S. last year. And we still get emails wondering where Topito and Pile-Up Rush can be found stateside.

We’ve recently come across another overseas game publisher also based in South Korea. Mandoo Games is both a publisher and developer of their own games as well as a distributor of popular games and accessories from other publishers around the world. We’ve been fortunate to try out a few of their proprietary titles over the past few months. And while you won’t find them at your local game store or on Amazon (yet), you just might see one or two being offered by domestic publishers in the near future!

No Swap No Pay!

At first glance we felt No Swap No Pay! was too much like a number of other games in this genre. It reminded us of Goodcritters or Spoils of War at first. But the execution is what makes No Swap No Pay! different from the rest. 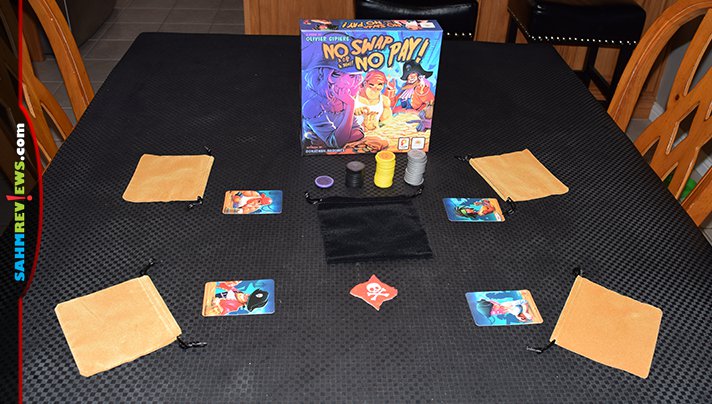 You and up to four other players are pirates who are splitting up the loot following a season of successful plunders. Of course you want more for yourself, but not all coins are worth the same. And some grant bonuses if enough are collected!

No Swap No Pay! by Mandoo Games is played over a number of rounds equal to the number of players. Everyone begins with a personal bag and a few coins already inside. You can peek inside your bag at any time, but you should never share this information with another player. The rest of the coins are placed into the main bag in the center of the table. 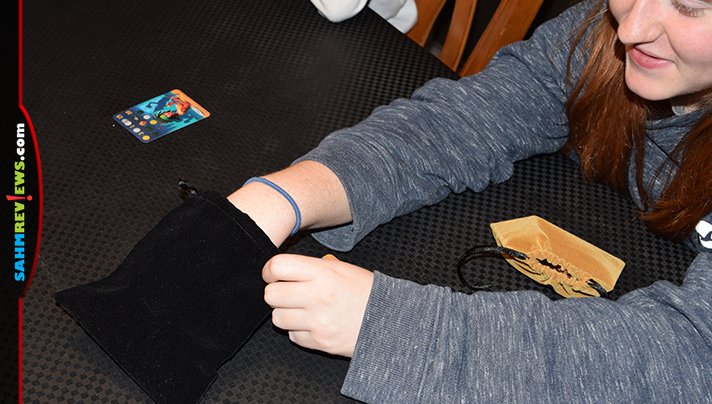 Each round consists of the start player drawing a number of coins from the main bag equal to the number of players times two. In turn order, all players choose one coin and put it into their bag. Then in reverse order everyone selects a second coin. Next, starting with the current Captain (start player), everyone must challenge another pirate who must choose to either switch loot bags with the challenger or allow them to draw one coin at random from their bag. 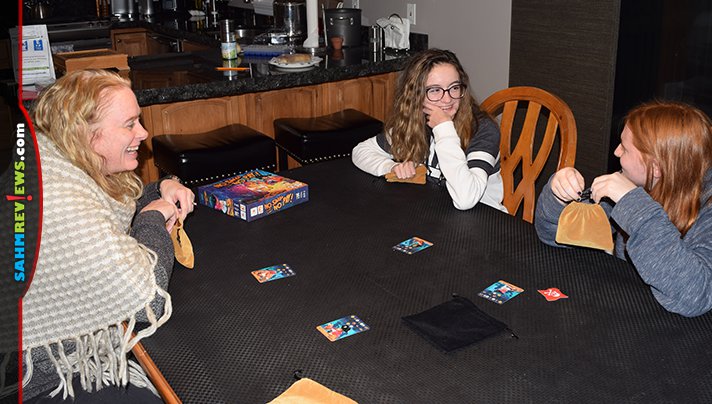 Once all players have completed a challenge, all pirates then look inside their bag and choose one coin to return to the main loot sack. The role of Captain passes to the next player on the left and another round is played. Once all participants have had the opportunity to be first player one time, the game ends and scores are tallied.

Players receive one point for each silver coin and three for each gold coin. Five silver coins grant a bonus and are worth 15 points! Black coins are cursed and can make your entire bag worthless if you end the game with one or two in your possession. But collect three or more black coins and they are now worth 10 points and don’t cancel out your other coins! Purple coins, of which there are only two, are wild and may be counted as any coin type. The pirate with the highest overall total wins No Swap No Pay!

We’d file Coco Banana under “simple games that are silly and fun to play”. Our first clue about the premise of the game should have been obvious when we opened the box to find a stuffed banana and a half coconut. We can honestly say no other game includes these as standard components! A deck of round cards completes the inventory and the rules can be summed up in a few sentences. 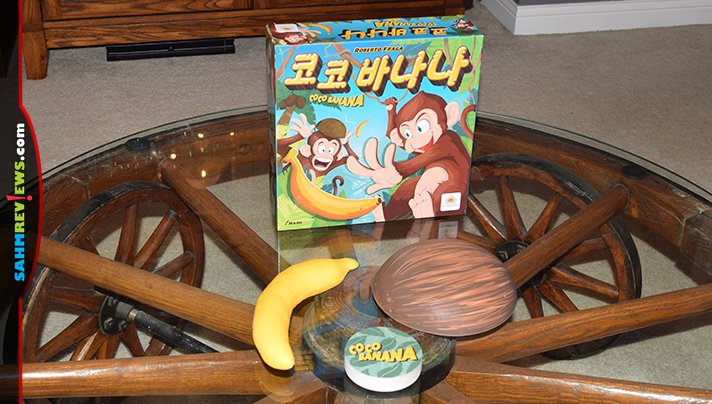 In Coco Banana by Mandoo Games, you’ll be trying to become the first player to get rid of all their cards. The complete deck is dealt out to all players equally. Cards show either a banana or coconut. Players must hold their cards in one hand while playing the game with the other. 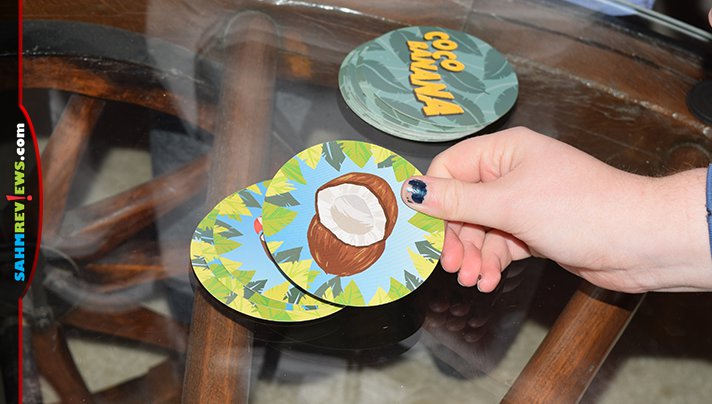 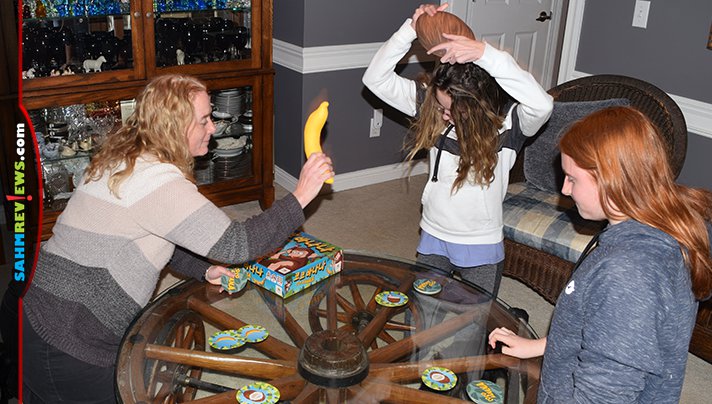 If the cards match, both players rush to grab the matching item (the coconut or banana) and exclaim “Oookiki”. The first player to do so becomes the starting player for the next turn. If the cards do not match, each player must grab the item displayed on their card. The person grabbing the banana is trying to fetch it and hit the other person on the head before they can grab the coconut and shield themselves. Whomever is successful with their fruit becomes the start player.

And that’s all there is to Coco Banana. It’s a silly game made difficult due to the shape and material of the coconut. And while it does sound a little violent, rest assured the banana is soft enough to even throw at your opponent if necessary!

There are lots of games about assembling various types of food like Filler, Blend Off! or Burger Up. This is the first time we’ve seen one that asks you to create your own kebabs! Kushi Express by Mandoo Games is another speed game that us older players have no chance of winning, but can still enjoy playing with the family. 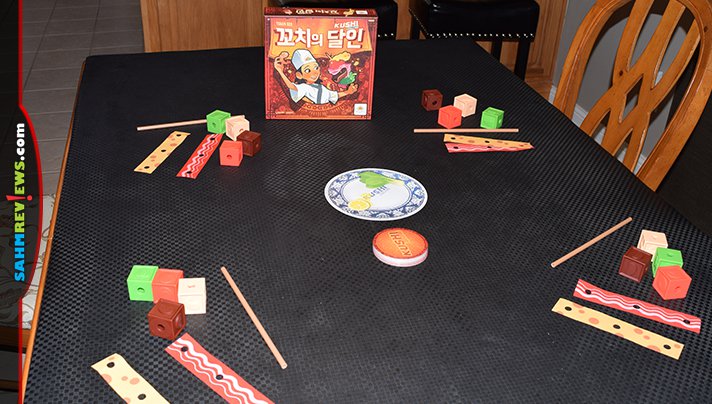 Up to four players begin the game with a set of ingredients. Silicone cubes represent the proteins, printed fabric strips are cheese and bacon wraps, and plastic straws become your kebab stick. A stack of recipe cards are shuffled and put in the center of the play area along with the empty plate board. 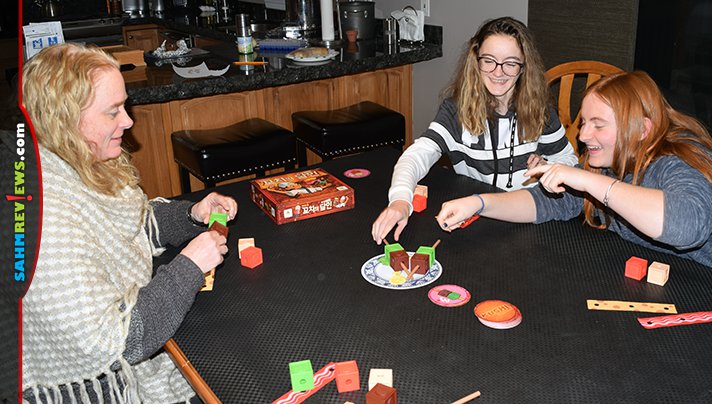 The start player turns over the topmost card in the deck and everyone will race to create a kebab that exactly matches the one shown. Some are easier with only one or two ingredients, while others are more complex (and worth more points) with wraps around proteins and multiple ingredients. 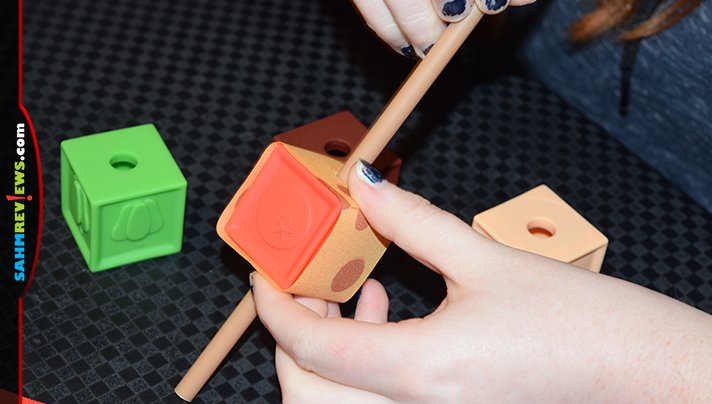 The first player to complete their kebab will place it on the empty plate and exclaim “Bon Appétit!”. If their kebab is incorrect, they must sit out the rest of the turn while other players continue to finish theirs. If they did complete it correctly, they leave their kebab on the plate and reveal the next card in the stack. This puts them at a slight disadvantage for the next round as they must first retrieve and disassemble their kebab before they can start on the next one! 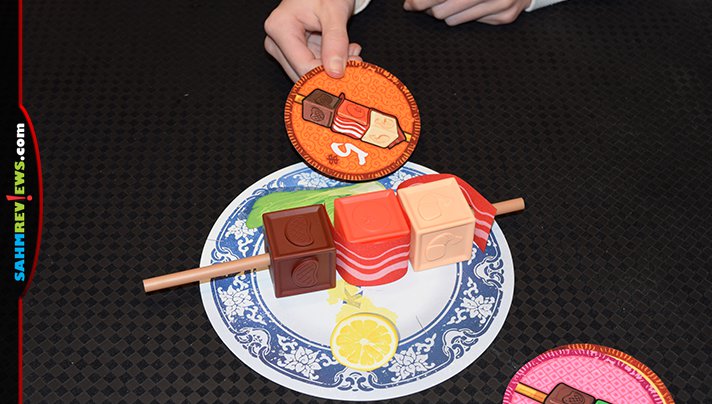 Random “Touting Cards” are shuffled into the deck, and when revealed, require all players to stand up and yell “Kushi!” to attract people to their shop. The fastest player to do so gets to steal a card from an opponent! A game of Kushi Express ends when the “Closed” card is revealed (shuffled into the last five cards). The person with the highest point total from all their collected cards wins!

The common thread in all of these Mandoo Games titles is they are all games that are very quick to learn and outrageous to play. Games that create an experience or social discussion over ones that are rule-heavy and mathematical. This means they are games your entire family can enjoy together. Even if it means acting a little silly or betraying your spouse or sibling!

Keep track of Mandoo Games by checking out their website or following them on Facebook. We’ll be watching Amazon to find out when their games will be offered on this continent!