Could someone do me a favor and slow time down just a bit? There is so much that I need to accomplish and no time to do it. That leaves little room for things that I WANT to do. As an example, we love seeing movies at the theater and go whenever we can. We see previews during one movie and make mental notes as to which we want to see in the theater vs which can wait until we’re able to stream it. In December, there were SO MANY I wanted to see but the only one we were able to fit into the schedule was The Last Jedi. Another that was on the top of our list was The Greatest Showman, a musical starring Hugh Jackman as the legendary P.T. Barnum. Unfortunately, we weren’t able to make it so we had to make lemonade out of our lemons and improvise. Any guesses what we did?

Yes, we played board games. That’s what we always do! This time, we decided to bring a circus-themed game to the table that is quick to play and more accommodating of our limited resource of time. Topito by Korea Board Games is one of several games sent to us by their partners at Sweet Lemon Publishing. Since they’re new to us, we thought we would share the diversity of the types of games they offer, beginning with Topito.

What’s a circus without rings, a ringmaster and a bunch of performers? Well, it’s not much of a circus, that’s for certain! In Topito, players are trying to capture the moments in the acrobatic show. At the start of the game, three podium tiles are arranged in the center of the table surrounded by randomly placed character blocks. Each player begins with four “goal” cards that you’ll be trying to complete in a quest to be the first to reach 7. 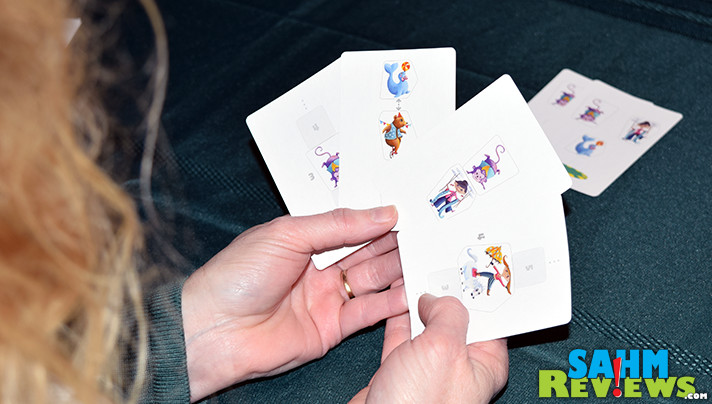 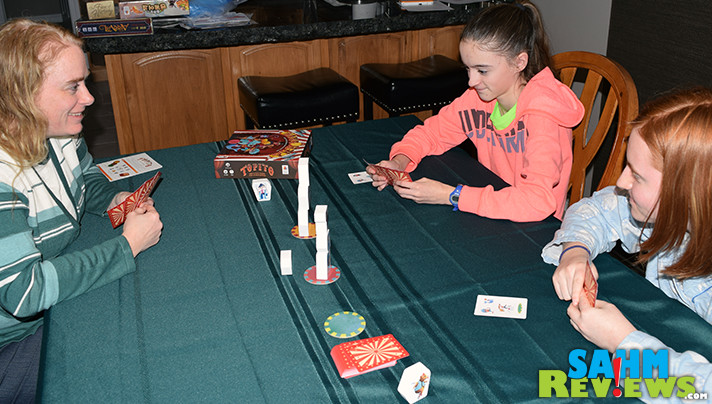 On your turn, you’ll select any block (or group of blocks) and carefully place them on a podium. You can stack them on an empty podium or on top of an existing tower of performers. What you decide to do is all contingent on your goal cards. When your performers are aligned – either by you or an opponent – you call out “Picture time” to indicate you witnessed your acrobatic feat then immediately draw a new goal card. The trick to the game is the ability to maintain a steady hand and not knock over the stacks! The concept is simple but the follow-thru… not so much. While you’re trying to arrange the stacks, your opponents are doing the same and you’ll often find your acrobats in the wrong place. Good luck trying to jump through the hoops needed to pull off a win!

We’ve often discussed how a game’s components can make or break the game. Games that contain durable or wooden pieces not only up the quality level of the game itself, but they help the game stand the test of time. The painted wooden components in Topito are excellent and the game a lot of fun. It has replaced Wonky in our game night bag (and you know how much I love that game so that’s saying a lot)! If Topito is any indication of what Sweet Lemon Publishing puts into each box, then you’re going to be hearing more about them.

This next game in our feature not only makes me hungry, but it also has a unique game board and mechanics. It’s a dexterity game for the active player and a memory game for everyone else. The inclusion of the dexterity factor in Yummy Yummy Pancakes gives the traditional memory game a good flip. 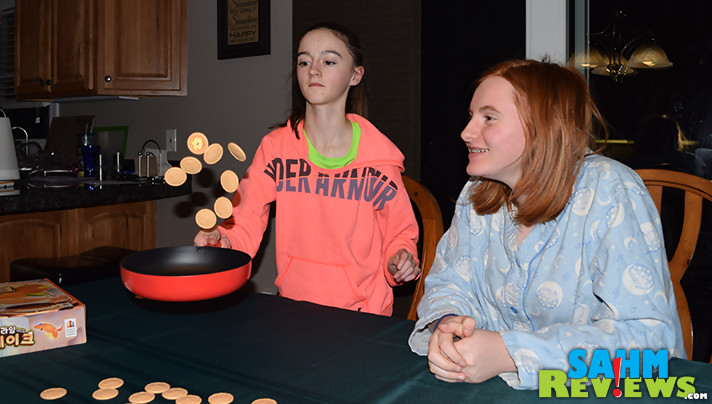 The concept is simple. Player take turns acting as the chef. There are five types of pancakes: strawberry, kiwi, banana, blueberry and chocolate. The chef places 8 randomly-selected pancake tokens in the frying pan face up so everyone can see what they are. As with making normal pancakes, they have to be flipped! Here’s where the dexterity comes into play. With a flick of the wrist, toss the pancakes in the air and (attempt to) catch them in the pan. If at least two have turned upside down then you stop. If not, continue tossing. Any that land outside the pan will be placed back inside (face-up) once flipping is completed. 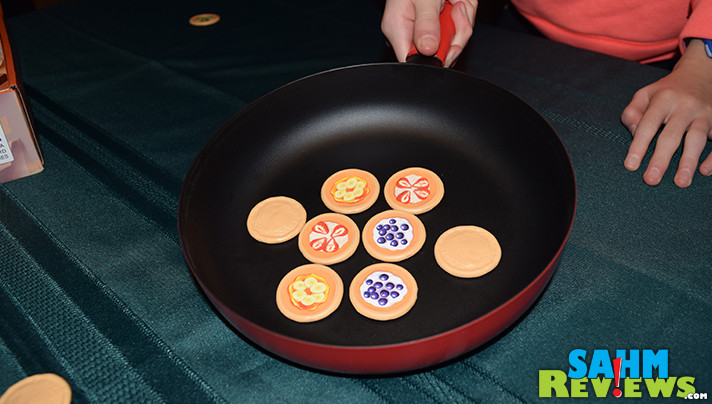 Now comes the memory part. As a chef, you must offer one of the other players a pancake. Select one of the face-down pancakes, glance at the type without anyone seeing then ask one of the players what they think it is. If they guess correctly, they get to keep it. If not, you do. At this time, you have the option to continue offering face-down pancakes to your opponents or you can stop and pass the job of chef to the next player. The success of the chef is really contingent on how many face-down pancakes are in the pan! The first player to 12 pancakes wins. Once again, the concept is simple (to teach) but not easy to execute. You’ll hear a lot of laughing and see a lot of pancakes on the floor in Yummy Yummy Pancakes.

With Valentine’s Day just around the corner, I thought I would include a game filled with flowers, love letters, candy and teddy bears. Spoil Me Not is a card trading game where you’re working to create the best collection of gifts. The problem is that not all chocolates are created equal… some are even melted! Some flower bouquets are beautiful while others are wilted. What may seem like a good gift idea might turn out to be a bust. 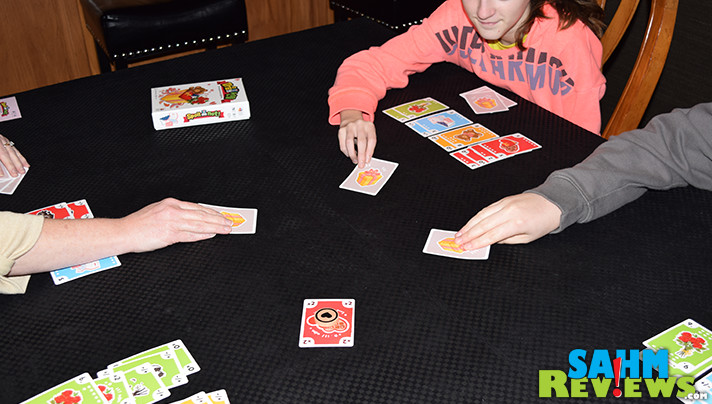 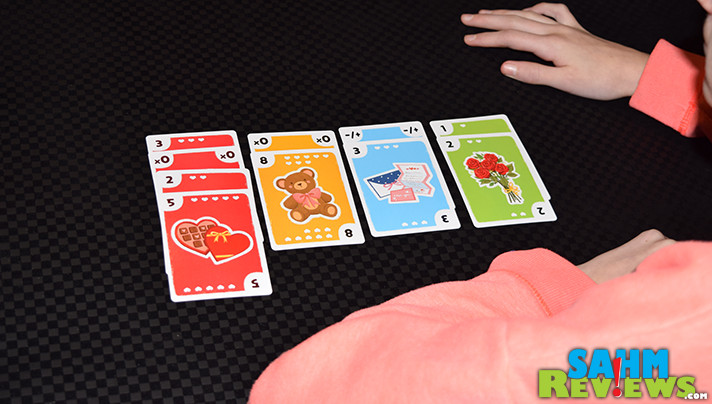 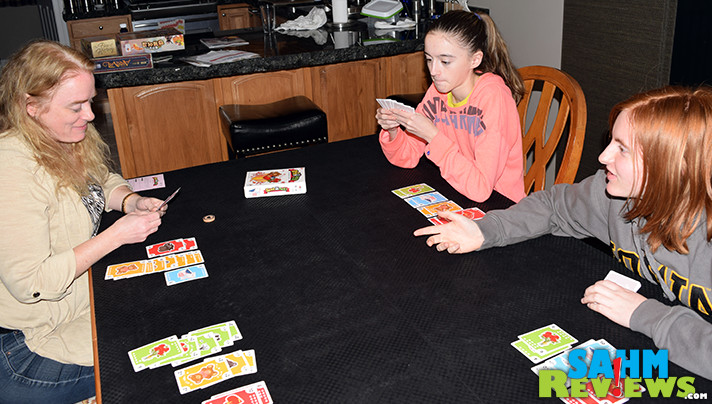 The person with the best score in Spoil Me Not claims the victory. With most games, you are working to get the best score for yourself, but when we play this one it’s pretty evil with everyone negotiating and pointing out ways to mess up the scores of someone else! Even with awful scores, I laugh when I play!

All three of these games from Korea Board Games through Sweet Lemon Publishing are easy to learn and quick to play. The only pitfall is we haven’t found them on Amazon or eBay, but they are available through the Shop tab on Sweet Lemon Publishing’s website. Stay tuned for us to share a couple more games, but in the meantime you can learn more by following them on Facebook and Twitter.

Have you heard of any of these games?