Back in college I took on a part-time job at our local Wendy’s. I had worked at a fast food place in high school, so it didn’t take me long to excel at pushing Dave Thomas’ products. If you’re old enough, you probably remember the SuperBar. I was at a Wendy’s when it first rolled out and got to see it come to life through construction, menu planning and execution. The SuperBar certainly brought in the crowds!

No matter which franchise I worked at (Taco Bell was another college-era employer during my summers in Alabama), there was one word we dreaded hearing – “Bus”. Actually, it was more like:

You guessed it – the impending arrival of a bus full of hungry tourists/school kids/church groups always struck fear in our teenage bodies. We knew that nothing would ever be cooked fast enough and mistakes would be made. Soon to be followed by the inevitable line of complaints from people who had nothing to lose since they’d never be in our store again. I think secretly the managers relished in the chaos because they knew the day’s take would be bumped by 40+ instant customers.

This is the premise behind Thunderworks Games‘ new speed dice game, Blend Off!. There have been a number of food-related games as of late, including one of our favorites, Rocky Road a la Mode, but we’ve never had one about making smoothies. And because it uses dice, I knew everyone would like it. 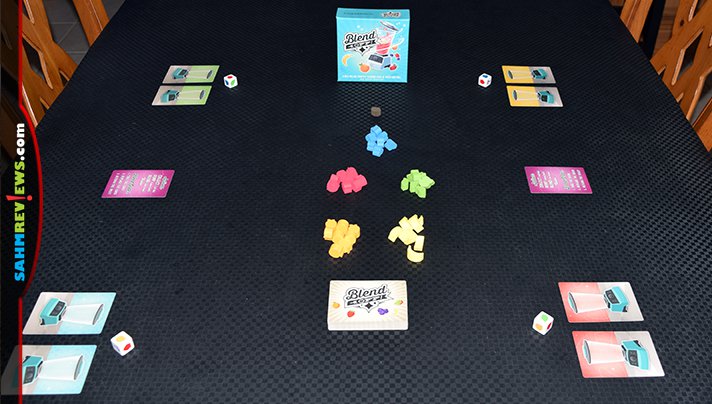 Blend Off! is a quick 15 minute game for up to four players aged 6+ that places everyone inside a local smoothie shop. Each person is a Master Mixer, responsible for filling customer orders. Becca is the shop owner who you aspire to emulate. Until one evening right before closing time (of course), you hear the one word you didn’t want to hear…

That’s right, a bus full of high school girls’ vollyball players pulls up and every single one of them wants a custom-made smoothie. Seeing the potential profit of serving so many customers in such a short amount of time, Becca decides to cut a deal with the players – whomever can blend the most smoothies tonight will get free smoothies for themselves for a month! 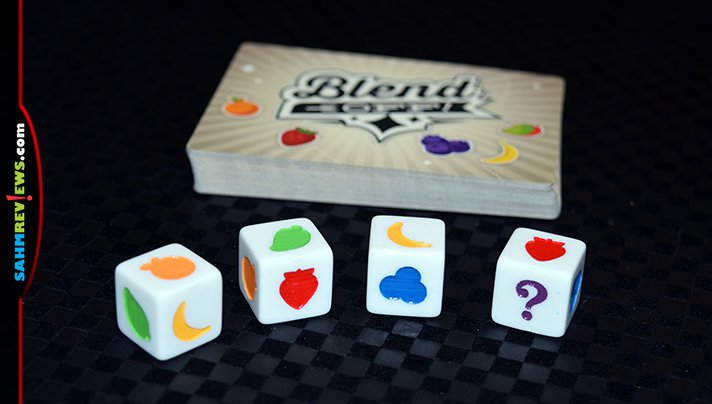 Inside the box are a deck of cards split up into Order Cards and Blender Cards (and a couple extra Rules Cards), 41 Fruit Tokens and 4 Fruit Dice. Each employee is given one Fruit Die and two Blender Cards in their chosen player color, which are placed in front of them. All of the Fruit Tokens are put in the center of the play area and the “Becca Deck” is set up using only the colored cards that match the colors of the players’ Blender Cards (use the whole deck for four players, fewer for lesser numbers). Deal out a number of them face-up equal to the number of players plus one, creating the current order queue. “Ready, Set, Blend!”

Blend Off! is a game where there are no turns and everyone plays at the same time (you are, of course, trying to blend the most smoothies!). The actions you can take are: (1) Collect – roll your die and take whatever fruit you earn and place it in one of your two blenders. (2) Dump – empty out one of your blenders into your other blender or back to the center of the table. (3) Blend – call out “Blend”, claim an order card and place it next to you. Draw a new card to replace it and return the fruit you used to make the order to the pool. 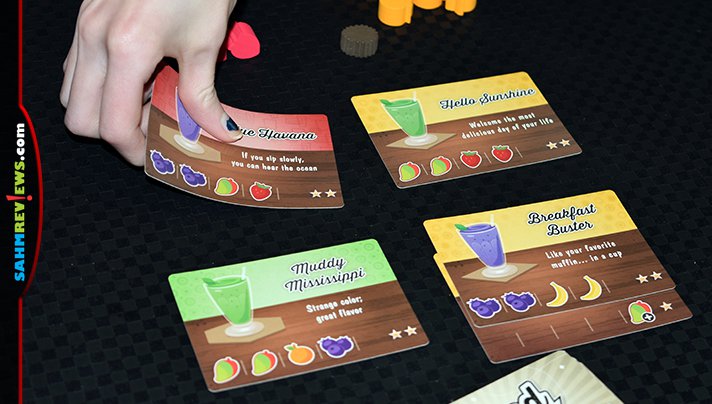 At any time an opponent may call out “Blunder!”, meaning they caught a mistake. This can happen if you blend with the wrong ingredients, forget to draw a new card to replace your order or even accidentally keeping the blended fruit in your blender! The person who made the error must pause until any other players calls out “Blend” (sort of like the penalty box in hockey). 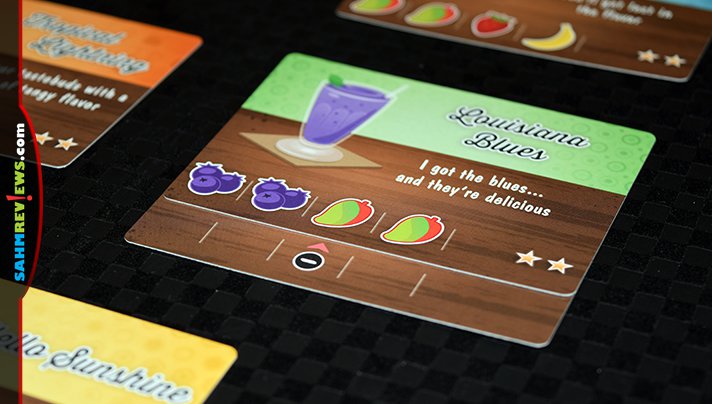 There’s more to Blend Off! than just filling orders. Special Order cards will turn up and alter the menu item. Each time one is drawn it is put on the table and another Order Card is drawn and set on top of it. These will add fruit to a standard menu item or ask you to “Hold the…” whatever fruit the arrow is pointing to. It is possible to draw multiple Special Order cards in a row, and these will continue to stack until you get an Order Card to begin as a base recipe.

There are a limited number of fruit pieces available, so any time you roll one and cannot collect the matching piece, take the durian fruit instead. This is a pungent Asian fruit that is know for not mixing well with other fruits and has an overpowering smell and taste. When you collect one, immediately put it in another player’s blender to foul up their recipe. That person must immediately dump out their blender to the center of the table and begin their recipe again.

The game ends once the draw deck is empty and all orders have been filled. Each employee counts the number of gold stars on their completed Order Cards (including Special Orders) and the player with the highest total is the winner of the Blend Off! In the case of a tie, victory is shared! Enjoy those free smoothies!

Now that you’re also ready to re-live those fast food nightmares, pick up a copy of Blend Off! on Amazon for under the $25 MSRP or at your local game store. You might remember Thunderworks Games from their first title we featured back in 2015, Bullfrogs. Check out their website for other games in their library and follow them on Facebook and Twitter to find out what’s being ordered up next!

Which fast food place(s) have you worked at?