When growing up in the 70’s, ice cream wasn’t an everyday thing for our family. In fact, it was a summertime-only treat. Usually from a giant tub purchased at our local Aldi or Piggly Wiggly. We also had our own ice cream maker that required ice, salt, a handed-down recipe and hours upon hours of cranking. This thing was old, considering electric ones had been available for two decades by that time. My grandparents’ excuse was we had to earn the ice cream by working for it!

On the days that we weren’t up to spending an afternoon building biceps at the crank, we anxiously awaited the familiar music resonating through the neighborhood announcing the arrival of an ice cream truck. All the favorites were present – Bomb Pops, Orangesicles, ice cream sandwiches and push-up pops! My favorite though was a simple fudge bar. You know the one – the chocolate popsicle that melts faster than you can possibly eat it. It had to be the messiest choice of the bunch. (Push-up pops ran a close second).

No matter where you live, there is no lack of places that sell ice cream to be enjoyed year-round. McDonald’s, Wendy’s, Baskin Robbins and Häagen-Dazs are but a few of the national chains that offer instant sweet tooth gratification, no matter the season. And we all have regional favorites – ours is a local Midwest chain named Whitey’s Ice Cream, with butterscotch-based milkshakes that are good enough to have sent on dry ice all across the country to those transplanted from our area. And let’s not forget the proliferation of yogurt shops. Or should I say “topping shops” that come with a little bit of flavored yogurt.

Occasionally there is still an ice cream truck that drives through our neighborhood during the summer. Ironically, if the temperature is too hot, they don’t come because the ice cream can’t be kept cold enough in their older van. And it doesn’t help that the van itself looks like something out of an 80’s B-movie. Plus they’re not carrying anything we can’t get at our local grocery store, so unless we’re really in a pinch, you don’t see us chasing it down the block. 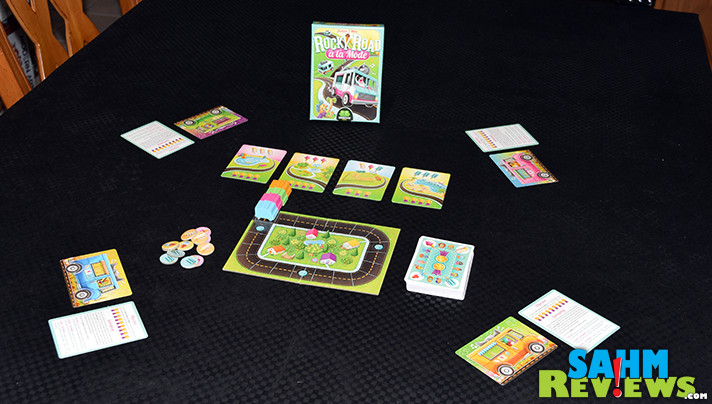 There is one ice cream-themed treat we can enjoy year round, and that’s a card game by Green Couch Games called Rocky Road a la Mode. In it we can pretend we’re the drivers of local ice cream trucks! And these trucks are not nearly as scary as the one trolling our neighborhood!

Rocky Road a la Mode is a small box card game designed for up to four drivers. Unlike many of the card games we’ve featured as of late, this one is not a trick-taking or number-matching game. Rocky Road a la Mode is better described as a recipe-filling game – and you usually see this type in a much larger box! Green Couch Games even managed to squeeze in a tiny playing board! 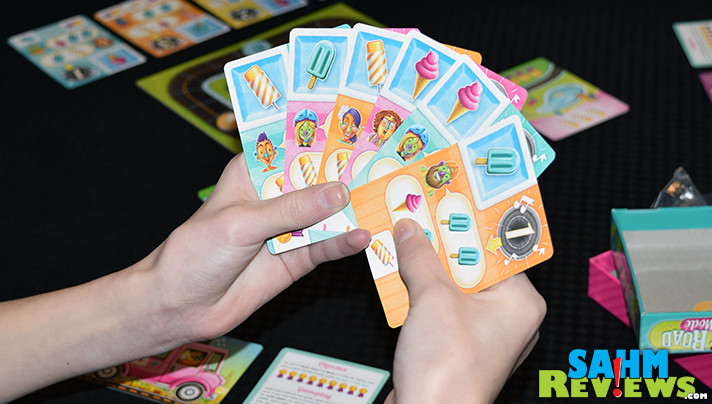 The object of Rocky Road a la Mode is to attract customers to your truck, serve them the ice cream treats they desire and collect nine or more ribbons (loyalty points). Each player begins the game with an ice cream truck-shaped “meeple”, which is placed on the board in the starting area, and three treat cards to form their hand. These card serve multiple purposes, being used as either a treat to sell or a line of customers waiting at your van. 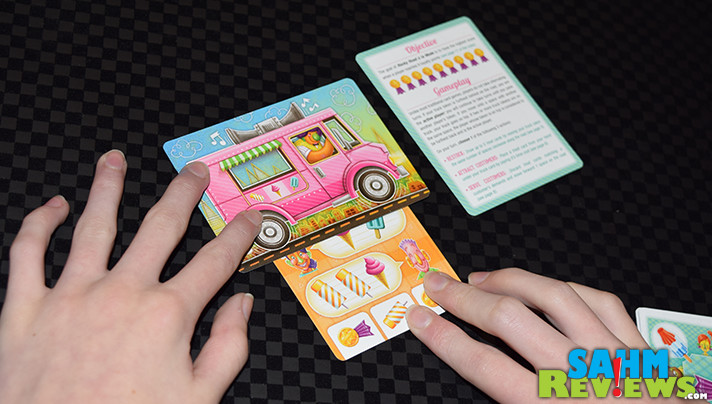 On each turn you choose from one of three actions. You can draw up to five cards from the pile in the center of the table (there is no hand limit), moving your van forward the same number of spaces as cards you receive. You can also choose to attract customers to your van by moving your piece forward the number of spaces printed on the top right of a card in your hand and then placing the card underneath your truck, leaving the customers exposed and “in line” to be served. 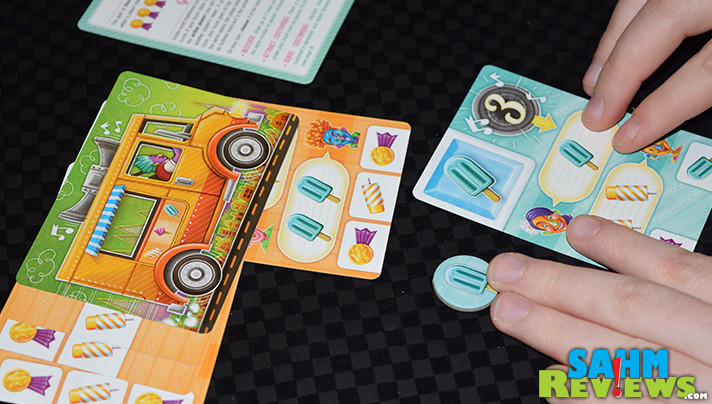 If you have customers in line you could also choose to serve one on your turn. Discard cards from your hand that match up to the items they want to purchase and slide the card up so you are ready to serve the next person. Once that card has been completely resolved, it is then turned sideways with the edge protruding from the left side of your van to show your rewards. You will receive some combination of ribbons or permanent supply bonuses. These are used to serve future customers without losing them and are critical in earning some of the location cards, awarded to the first and second players to gather the matching supply bonuses, earning them additional victory points. 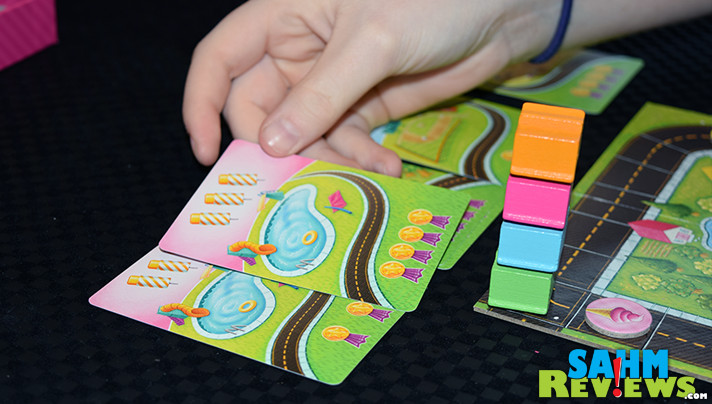 Along the way you will cross potholes, which actually award a bonus in the form of a token to be used one time when serving a customer. These are returned to the box when used and may match a particular ice cream treat or be a “wild” bomb pop, which satisfies everyone. 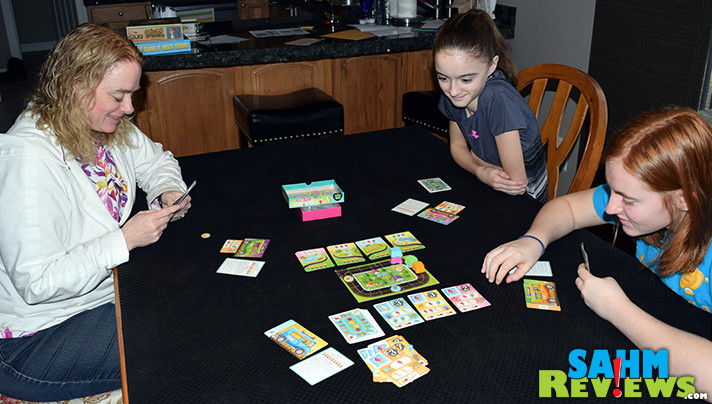 Turn order is also unique in Rocky Road a la Mode. Instead of going in order, the person whose truck is furthest behind takes the next turn. So it is possible to take more than one turn in a row if your opponents have drawn too many cards or moved too far ahead to attract customers. The truck meeples stack on each other when in the same space, with the truck on top still being considered “last” and getting to take another turn. So while you think a good strategy might be to grab as many cards as you can, this will move you way ahead and let the others take multiple turns before you get to play again! 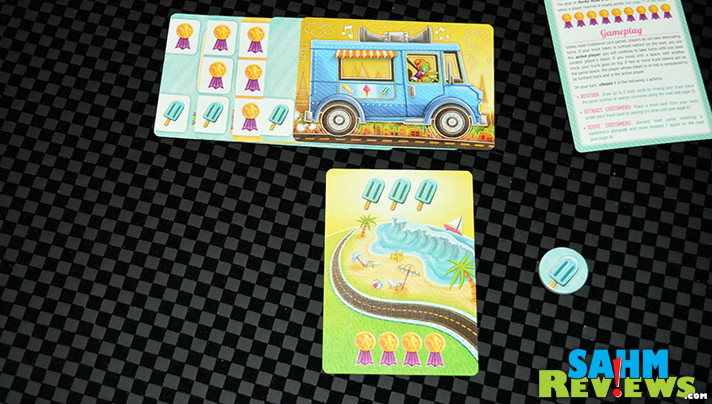 Once any player gets at least nine ribbons, everyone else gets to continue playing until their truck passes the player that already went out. After everyone has moved past them, making their truck now in the last position, the driver with the greatest number of ribbons wins Rocky Road a la Mode! Any ties are broken by the order on the board, with the truck furthest behind being the overall winner.

I realize it is still winter, but it’s never too cold to enjoy a game about ice cream! You can find Rocky Road a la Mode on Amazon for under $20. Green Couch Games is one of those companies whose games are easy to collect since they are all affordable and come in like-sized boxes. Check out their website for their entire lineup of card-based games and follow them on Facebook and Twitter to see what’s up next!

What is your favorite flavor of ice cream or type of popsicle?