Woah. We’ve talked about Daryl Andrews a few times recently when we shared our Sagrada game overview, Oregon Trail board game and discussion about Outpost: Amazon. When we featured Sagrada, we mentioned several other games in our collection by this star of a designer. A couple years ago while attending Origins Game Fair, we ran into Daryl but weren’t able to have much of a conversation with him. With a stack of prototypes in hand, he was always en route to a meeting or just leaving one. We were able to chat briefly as we were checking out and as is common, asked how the event fared for him. He said he was pleased, having signed with multiple publishers to print several of his games. It didn’t surprise us at all.

Fast forward to now and we’re seeing those games roll off the production line. Many of them we have kept watch for as there was enough buzz through gaming circles to know when something like Oregon Trail board game and another you’ll be seeing us feature soon, City of Gears. But every once in a while, we’re surprised when we go to play a game and notice his name on the front of the box. Before the Earth Explodes from Green Couch Games is an example of exactly that! 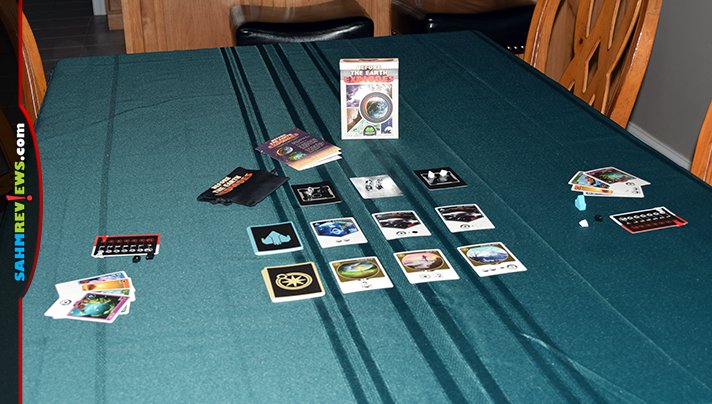 Unlike many of his other games, Before the Earth Explodes is designed for two players. As is the case with other titles from Green Couch Games, it comes in a small box which makes it a great for travel! While this game includes components, they aren’t half as cute as the ice cream trucks in Rocky Road a la Mode! To set up the game, place all the resources in the bag then shuffle the spaceship and planet decks. Each player selects a player and takes the associated action cards in their color, two random resources from the bag, a fleet card and two tracker clips that get attached to either side of the fleet card. In addition, one player takes the tiebreaker token. The play area consists of three rows of three cards each. The first row is quarry cards (seeded with two random resources each), the second are spaceship cards (and the draw deck) and the third is made up of planet cards (and the draw deck).

The game is made up of simultaneous play for multiple rounds until one of three winning conditions is met. You colonize seven planets, reach seven technology on your own fleet card, your opponent reaches seven damage on their fleet card or you meet the requirements on a spaceship card. Each round consists of four phases: Reactions, Actions, Colonize and Maintenance. Each player card displays a letter in the upper left, a reaction effect on the top and an action on the bottom. Reactions include taking a spaceship card, cancelling the opponent’s action and dealing damage. Actions include increasing your technology, performing your opponent’s action, spending two less resources to colonize a planet and collecting resources from a quarry. 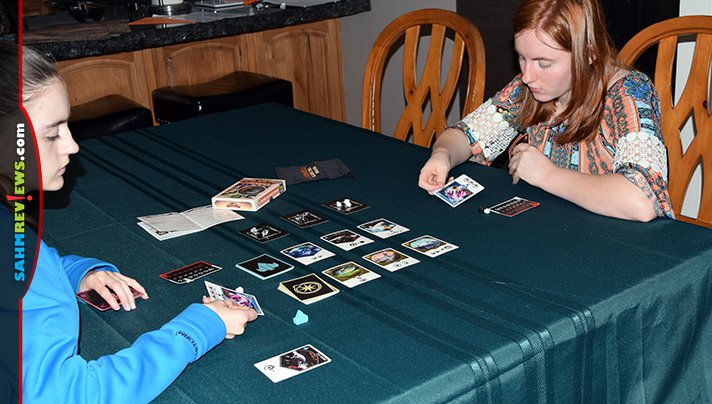 To begin the round, each player selects a card to play. Remember that I said play is simultaneous? Well, that’s kind of accurate. The cards are selected and revealed at the same time, but they process in alphabetical order. If both players opted for the same card, then whomever holds the tiebreaker goes first (then passes the tiebreaker token to the other person). Like a game of rock, paper, scissors, each card is able to impact an opponent’s card. As an example, if you play A, not only do you get to collect a spaceship card, but you cancel your opponent’s action and deal them one damage if they played B. If not, then you collect your spaceship card, but your card doesn’t have an additional reaction. You’ll be able to take the action of increasing your technology by one unless your opponent played D, in which case your opponent cancels your action and deals you one damage. Once reactions are completed, any non-cancelled actions on the bottom half of the cards are resolved and those players move to the colonize phase. If your actions were cancelled, you aren’t able to colonize this round. 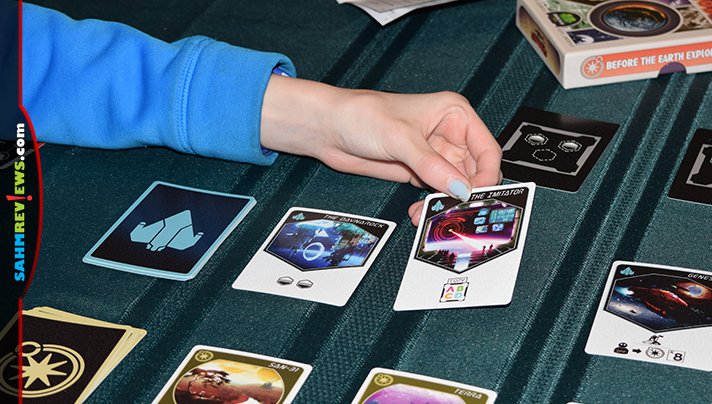 I briefly mentioned that Card A allows you to take an available spaceship card. These include abilities that are resolved immediately including reducing or dealing damage, adjusting your resources or technology and copying the actions of another player. Other spaceship cards contain alternate victory conditions such as reducing the number of technology required to win and creating new conditions such as winning when you’ve collected 10 resources. 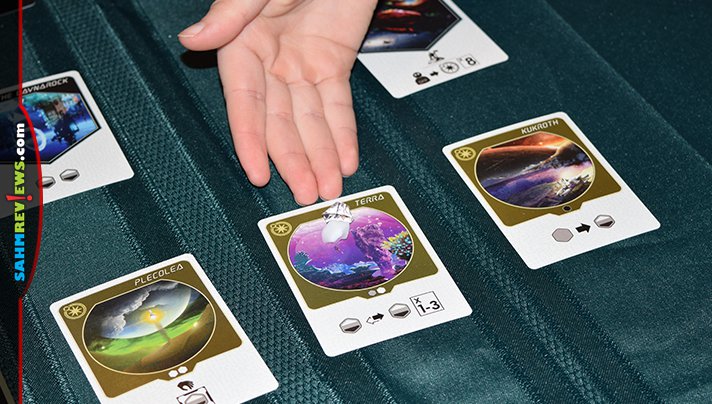 One of the game’s victory conditions is to colonize seven planets. During Phase 3, players spend resources to collect a planet from the play area. There are 16 planet cards, each with an ability that can be tapped once per game during the Action or Colonize phases. These bonuses vary and may include dealing damage to an opponent, collecting resources, adjusting technology levels or colonizing another planet.

Phase 4 is a cleanup phase that involves refilling the rows of planet and spaceship cards and adding resources to the quarry cards. Players collect the action card they selected, giving them all four choices again for the next round. Play continues until one of the conditions is met and a winner crowned. In our opinion, Before the Earth Explodes can be played by kids as young as 8 if the rules are outlined for them. It isn’t a complex game and there are only a few options each round so it’s completely approachable for ages lower than the recommended 13+. Before the Earth Explodes with set you back about $20 on Amazon or direct from Green Couch Games. Continue to get news about their upcoming projects by tuning in on Facebook and Twitter.

What bucket list item do you want to check off before the earth explodes?

2 thoughts on “Before the Earth Explodes Game Overview”