I never used to be a fan of New York City. My first couple of experiences of the city were three-day trips for conventions. We usually stayed in the cheapest place we could find while still within a couple miles walking distance to the convention center. If you’re ever worked any type of convention, you know that you spend you day standing on a concrete floor and evenings are usually reserved for more business meetings or turning in early to get ready for the next day.

My opinion changed a few years ago when the family spent nearly a week exploring Manhattan. Nicole was there for a blogging convention, so the girls and I made the most of our time in the big city. We went to the nation’s oldest pizza parlor, the girls got makeovers and we hit all the tourist spots in the borough. We know we missed a lot of things, so we’re actually looking forward to being able to return some day!

With this new outlook about New York City, board games set in that location became more appealing to us. New York Slice is now a perennial favorite in our house and The Godfather is also part of our game night fare for when we’re wanting to enjoy the grittier side of the nation’s largest city. Recently, FoxMind republished a classic New York-themed game from the early 90’s, Manhattan. In fact, it was the 1994 winner of the prestigious Spiel des Jahres (Game of the Year)! I had played previously at a friend’s house, but am excited to now have my own (newer) copy in my collection! 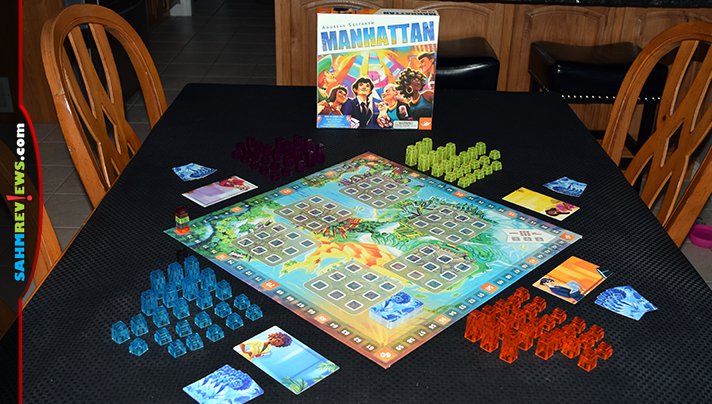 In Manhattan, you and up to three friends are racing to build skyscrapers around the world. You’ll want to corner the market by controlling cities by having the most structures and earn bonuses by building the tallest tower! Inside the box you’ll find 96 building blocks of four colors and various sizes, a large game board, four player boards and a deck of 45 building cards. Each player receives all the building blocks matching the color of the player mat they choose, along with four randomly-dealt building cards. That’s all that is needed to set up a game of Manhattan and the oldest player is determined, who begins the game as the first player! 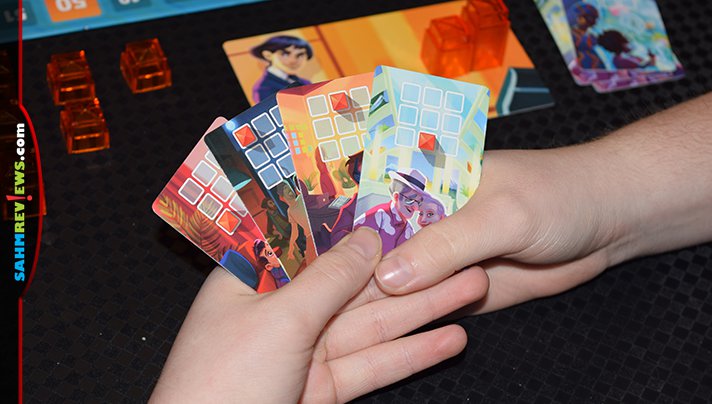 Manhattan is played over four rounds consisting of six turns each. After examining their cards, all players choose six building blocks of any size to play this round. In turn order, each person plays a card from their hand. This card depicts where on the board they will place one of their chosen blocks. This card cannot be rotated and must be oriented to their side of the board. The block must be built on the location depicted, but may be in any of the six areas. 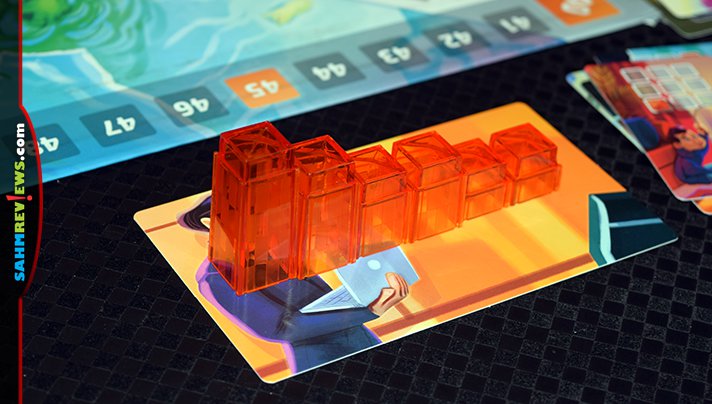 When placing a block, it may be built in an unoccupied lot or onto an existing tower. If raising an existing building, the new block can only be placed if it would cause the player’s total number of stories to meet or exceed the total stories of the current owner. Of course, you may also place it on a building that you currently own to help bolster your position. After placing one piece, draw a new card from the face-down pile.

Players take turns in clockwise order placing one block each until all six have been placed. Round scoring occurs with the player owning the tallest tower on the board receiving three points. Cities are examined, with the person who has the most buildings owned in each one being awarded two points. Lastly, everyone receives one point for each building anywhere on the board that they own (even if it scored previously). The next round begins with everyone choosing six more blocks to play! 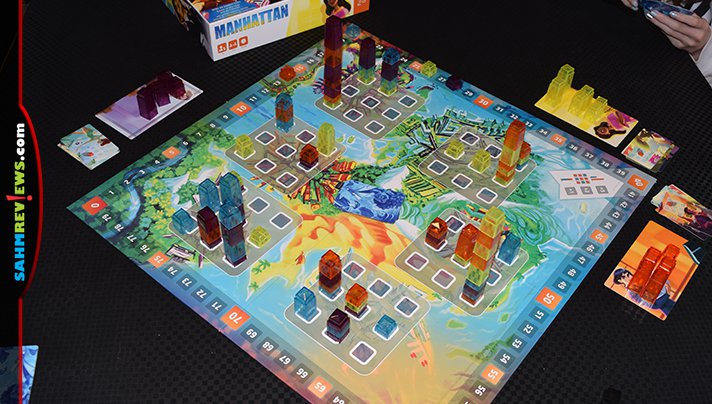 The game of Manhattan ends after the fourth round when all of the building blocks have been constructed. The person with the highest point total after the round’s scoring is the winner! If tied, the player with the highest building among the tied players is crowned champion! 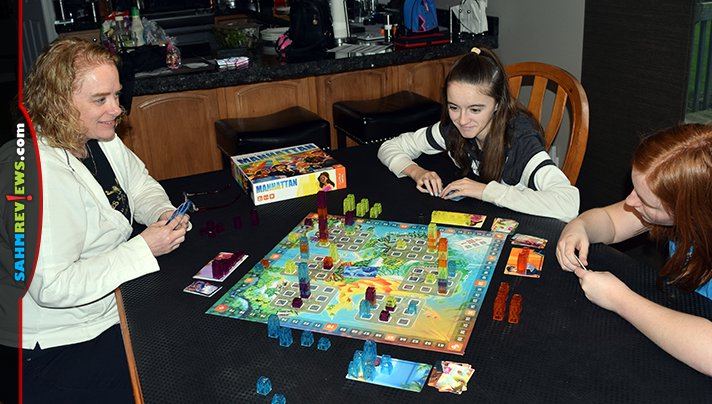 Manhattan supports two to four players with special rules for 2 or 3. We recommend playing with the full compliment of four as it provides the most fun. You will find Manhattan on Amazon or use FoxMind’s store finder to see where it is being carried locally! Then follow them on Facebook or Twitter to find out what they’re releasing next!

How many times have you visited New York City?

3 thoughts on “Manhattan Board Game Overview”