In the past I’ve made light of board games that come in a box resembling one from Domino’s Pizza. I even went as far as to ask whether a good game could really be expected when corners were cut. Planetary Strike was self-published and we forgave the minimalist packaging and tackled the actual game head-on. Then shortly after we played another self-published game, Universe, which also came in the same style box. Neither game was a ‘dud’, but certainly lacked the polish and charm of being provided in a real game box.

Recently another pizza-box game hit our doorstep. Only this time it wasn’t from a one-man-show publisher, it was the latest game title from Bezier Games. Known for their fantastic line of trivia games, Colony (our current favorite dice game) and the ever-classic One Night Ultimate Werewolf series, New York Slice‘s packaging wasn’t the result of cost-cutting. It was the perfect choice for a pizza-themed board game! 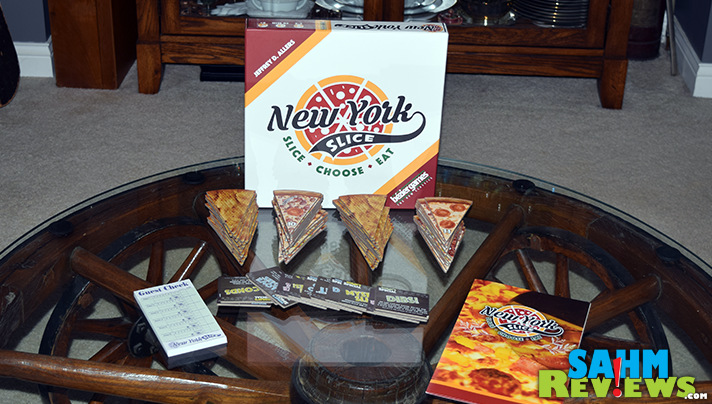 In fact, not only is the heavy-duty box designed to resemble a one-piece pizza box, the rules are laid out like a typical pie menu and even the included score pad resembles a waitress’ guest check pad! New York Slice takes on the old routine of deciding who gets what pizza. This brings back memories of the kids fighting over a single slice because one had more pieces of pepperoni on it. Wait…that was just last week.

Included in New York Slice are 69 pieces of pizza, printed on extra-thick board (thicker than some thin crust pizzas!). These are randomly shuffled and put in stacks of 11 slices, face down, with the remaining three being returned to the box. A separate stack of “Today’s Specials” cards are also shuffled and one placed on each stack of slices. 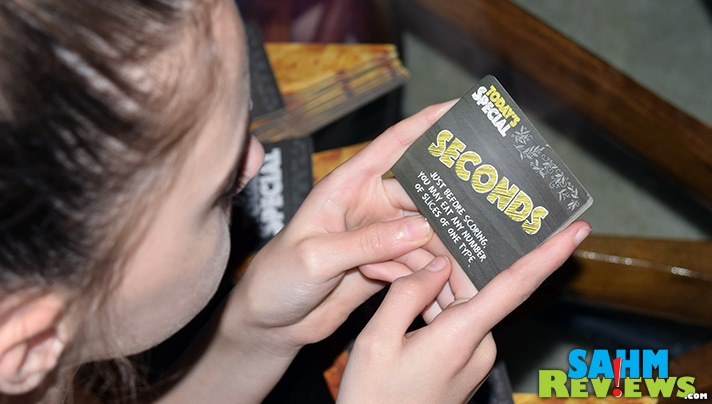 The first player chooses one stack, turns over and reads aloud Today’s Special and proceeds to construct the pizza by flipping the slices and arranging them in a circle. The slices are kept in order as drawn, and 11 slices will form the entire pie.

I don’t know about you, but when I was little my mom had a routine of how my brother and I would split things. We’d usually argue over a candy bar or a slice of pie, so mom’s rule was that one of us would split the item and the other would choose first. That’s exactly how New York Slice is played! The active player splits the pizza into portions equal to the number of players. They cannot move the slices around – they must keep them in the same positions relative to each other and divide the pizza into what they feel are equal portions. 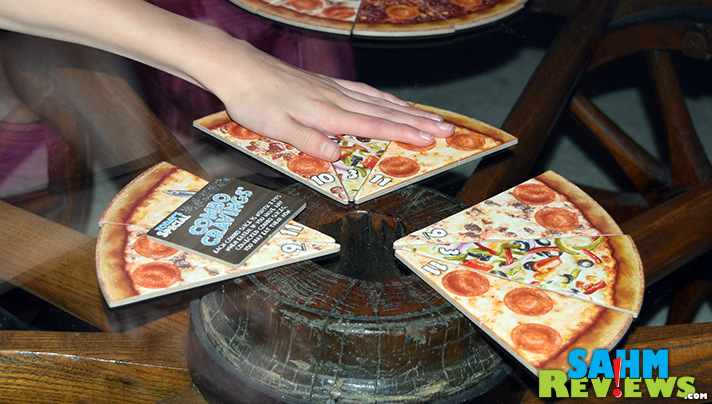 Unfortunately not all slices are created equally! Some are rarer and others might give you additional points at the end. The Today’s Special card is also in play and set on one of the portions, sweetening the deal for whomever chooses it. Once the active player is happy with the split, the next player selects a portion, then the next, and so on until it comes back around to the active player, who receives the last pieces. 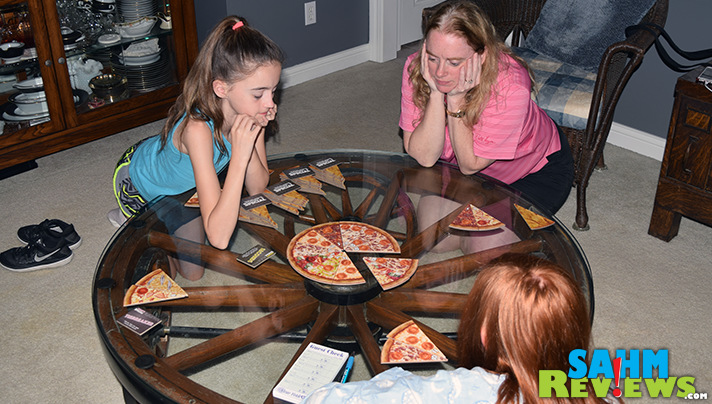 As you might have guessed, New York Slice is all about set collection. Each pizza type, from vegetable through cheese, awards points to whomever has the most slices of that type on their plate. Anchovies on your pizza are negative points, but can be abated by eating the pepperoni off your slices as you win them. Supreme pizza slices act as wilds since they have all the ingredients on them, and Today’s Special will also award points or allow special actions unavailable to other players. The player with the most points wins! (and pays the check)! 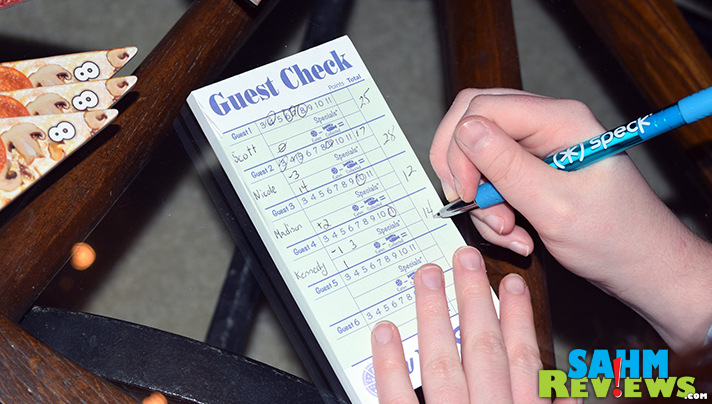 We found New York Slice to be a wonderful solution when looking for a game to introduce new players to the world of hobby gaming. Supporting up to six players and bringing back memories of fighting over the last chocolate chip cookie, it is well worth the under $30 price on Amazon. While rated for ages 8+, I would not hesitate to include younger members of the family. All kids love pizza!

If you’re a fan of Bezier Games‘ hit game, The Castles of Mad King Ludwig, you need to be sure you’re following them on Twitter and Facebook. They have a sequel in the works called “The Palace of Mad King Ludwig” that is rumored to replace the castle version on your game shelf.

Hungry now? Enter to win a copy for yourself by using the form below! Don’t forget – you can come back daily for more entry opportunities!