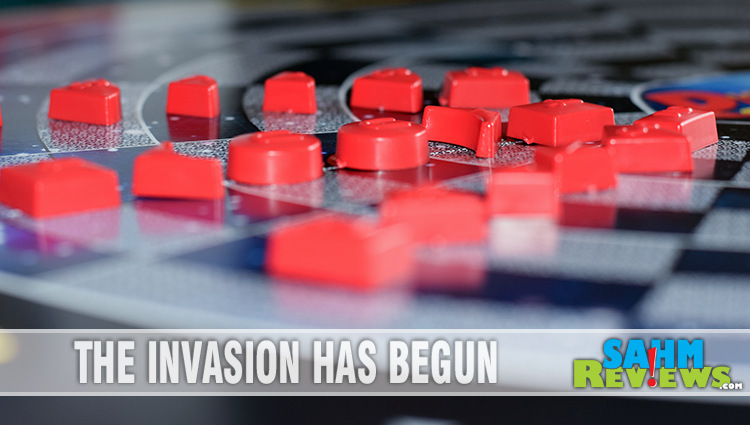 Sunday’s Thrift Treasure was about Wandering Words, a game self-published and distributed back in the 80’s. I have to admire anyone who takes the risk of shelling out for a run of games and then trying to recoup the cost and make a couple bucks without an established company behind them. It’s a perfect example of the American entrepreneurial spirit and I can’t help but root for the underdog. Plus, you’ll never know what diamond-in-the-rough you’ll discover! 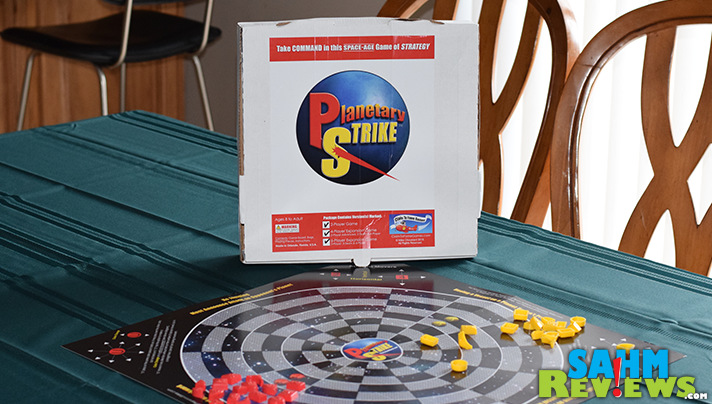 Today’s feature (and coincidentally Friday’s) is about a game that is also going the self-published route. Planetary Strike by Claim to Fame Games is a unique space-themed abstract game that comes in a box that I can only describe as one made to carry a small pizza. But that’s OK, I would rather forego a fancy container to either have better components inside or a lower price. Since this one comes in as low as $12, I think we know which direction they chose!

You might remember that abstract games are probably my favorite. No luck involved, both sides evenly matched – a true battle of wits. And even though the true definition of an abstract typically refers to a game without a theme, in the case of Planetary Strike, the theme doesn’t affect the outcome of the game at all. 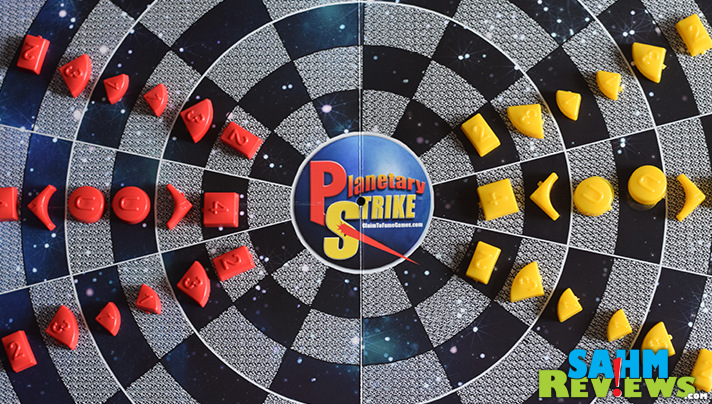 There’s an interesting story behind the creation of this game, once called “Control”. Conceived in the early 90’s, they originally hand made the game out of wood and began their search for a publisher to bring it to market. After not successfully landing a publishing deal and selling a few hundred copies in the Tampa area, the project was shelved for nearly two decades. This year saw the establishment of a formal company (Claim to Fame Games) and the redesign and renaming of the game to its current form.

If you purchase the full version of Planetary Strike (only $30) it comes with three different playing board. The first is a 2-player introductory board, the second covers more advanced 2-player games and up to four individual players, while the third allows for up to six to enjoy a game. 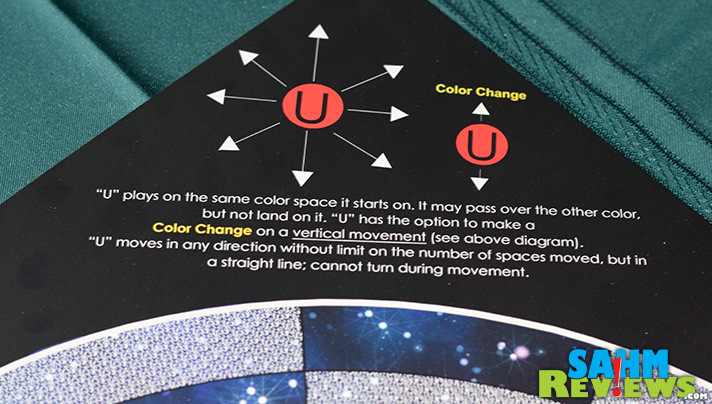 For the introductory game, each person received a team of 18 plastic pieces in different shapes. Each piece is subtly designed to give clues as to the movement direction allowed and numbered to remind how far they can move on a turn. The board also has a handy key to also remind you which ship does what. (The six types of pawns represent different ship types). 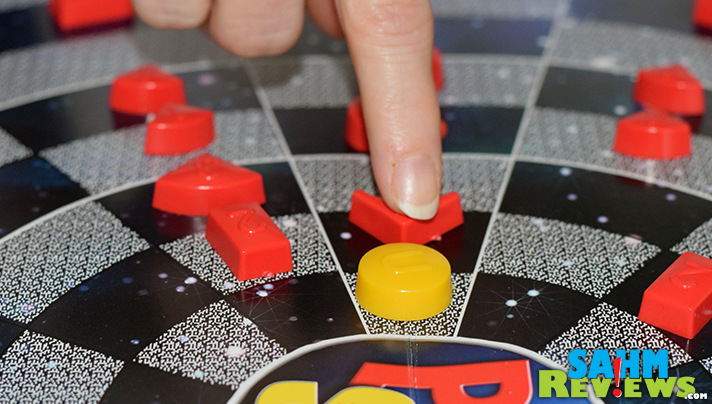 The objective is simple and reminded me of another abstract we played last Spring, Octi – get one of your ships onto the planet of an opponent. First one to accomplish it wins. Players take turns moving ships one at a time, and the similarities to Chess cannot be ignored. Except that with a round board, you can be attacked from either side, not just the front. 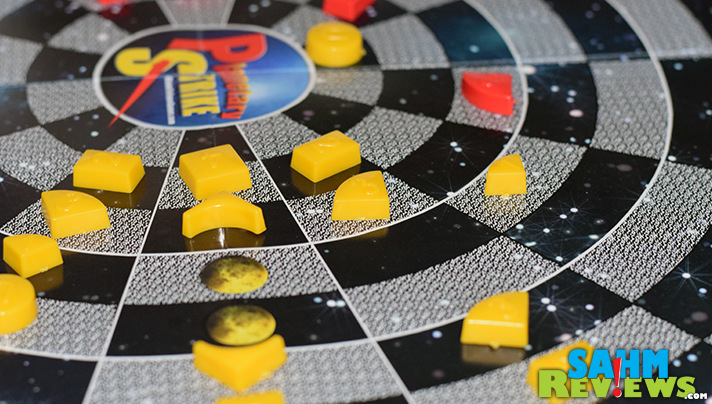 The rules of Planetary Strike are very similar to Chess. Each piece has its own movement conditions. You have to announce “Defend your planet!” when you put an opponent in ‘check’. You can’t move a ship that would put your home in jeopardy of being taken. But unlike that classic game, pieces cannot jump over others. Blocking is a viable strategy and quite necessary to hold off attacks while you gather your offense for an assault. 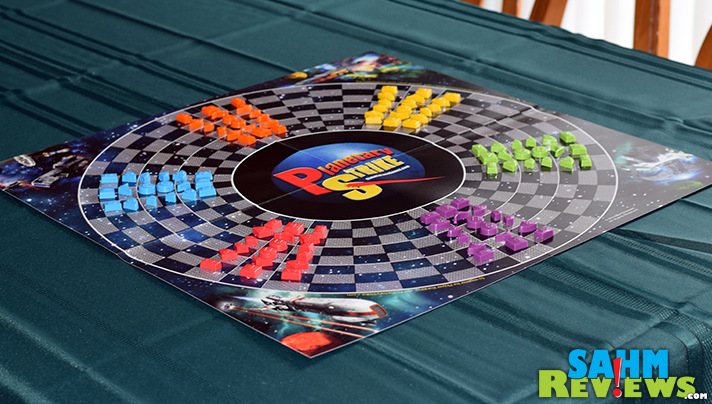 The six-player map is understandably larger to accommodate complete fleets for each player. While it is usually played as a free-for-all, there are additional rules included for team games. I typically like to note how long a game will last, but also like Chess, it could be a quick win if you don’t see where your opponent is headed, or a long back-and-forth battle taking an hour or two. 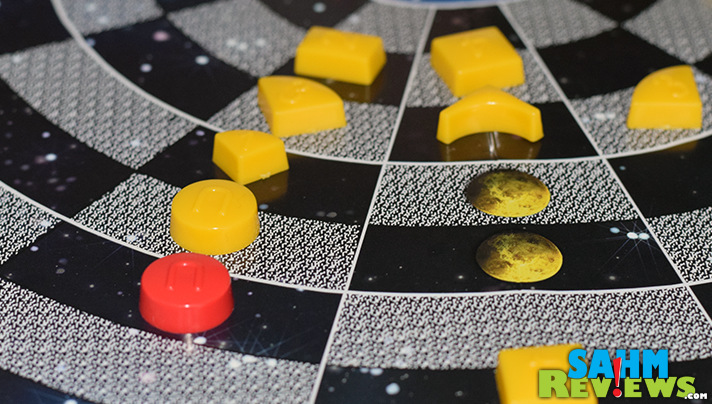 The plastic injection-molded pieces are sufficient, and the boards are playable, but printed on thick stock paper. Of course this helps keep manufacturing costs down (as well as shipping fees). They do sit flat on the table, so once playing you won’t notice the difference over a normal game board. And then there’s the pizza box. Again, a cost-saving measure that doesn’t detract from the game play, but will not look pretty on your shelf.

Overlook these drawbacks and I’m sure your wallet will thank you. If you don’t need to seat six players, the bundle that includes the introductory board as well as the 4-player field is your best value at $20. Claim to Fame Games has also put together a series of YouTube videos to help you learn to play or just see it in action. You’ll also find photos and appearances posted on their Facebook and Twitter timelines if you want to see it in person!

How many players would you need to accommodate?

26 comments on «Can Good Games Come in Pizza Boxes?»