On Wednesday I introduced you to Planetary Strike, a self-published game that came in a small pizza box. It turned out to be a pretty good abstract game that would probably have cost a lot more had it been published in the traditional manner. It came in what I humorously called a ‘small pizza box’ with a label. Today’s game also has taken from the fast food world and used what I would call an ‘extra large pizza box’! Simply called “Universe”, let’s take a look at this self-published dexterity game from Diletostra. 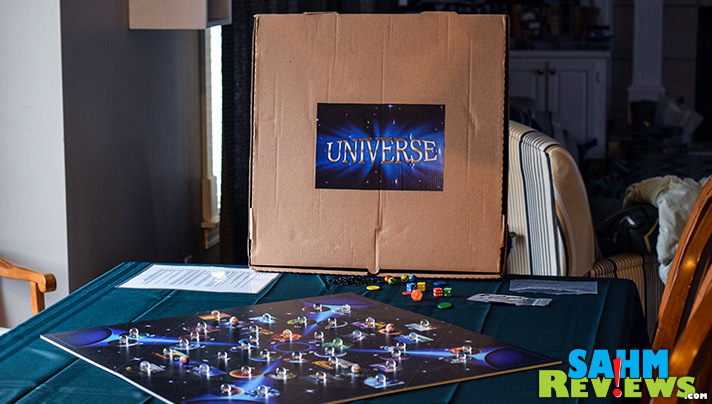 A game is considered to be in the dexterity class when it required some physical action by the players. Whether stacking blocks (Wonky), knocking pieces out with an axe (Click Clack Lumberjack) or hitting a lever to make your plane fly in the air (Loopin’ Louie), all require hand-eye coordination to be successful. 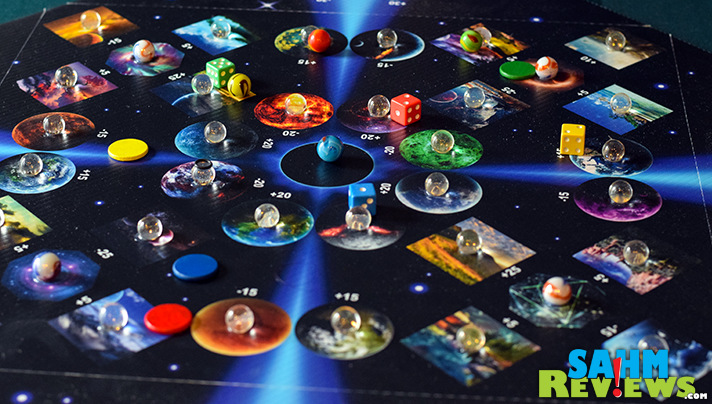 The board is colorfully printed on a lightweight corrugated plastic sheet that folds snugly into the velvet-lined ‘pizza box’. Glass marbles representing different planets are glued into place, acting as bumpers. 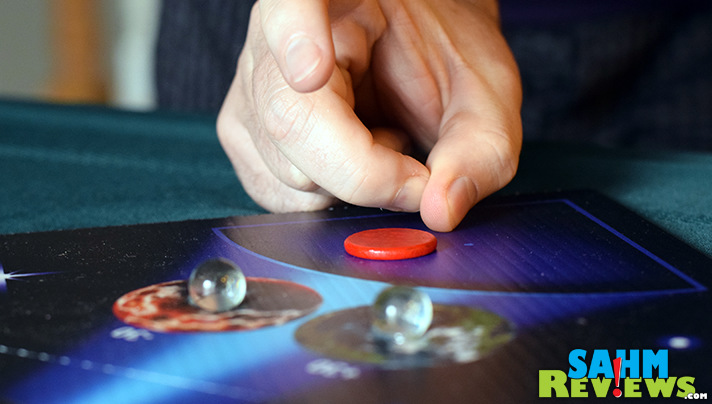 Up to four players each choose a color and starting corner and take turns shooting their ships into the playing field. Ships are represented by a six-sided die, a glass marble and a wooden disk. 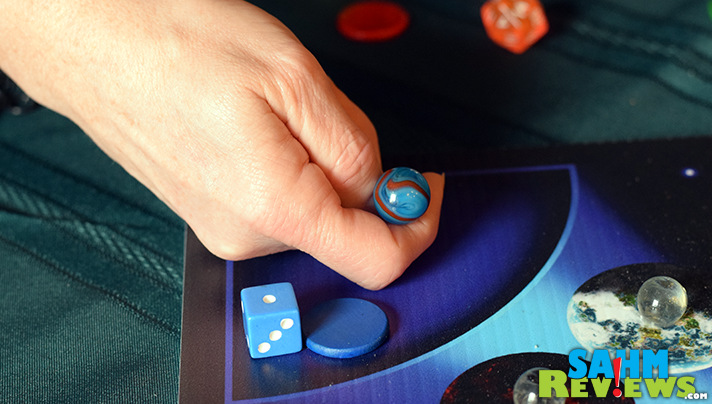 You must start your shot from your home base (corner) and the method you use is up to you. Flick the disc, roll or toss the die, lightly nudge the marble.

You can compare Universe to a 4-player space-themed version of shuffleboard. Scoring only occurs at the end of a round, so if an opponent manages to score a particularly high shot, you can still knock it away with an accurate throw.

Each area on the board is worth a set number of points (positive or negative) and your score is determined by your ships that remain within the circles at the end of the round. If you end up right in the center of the map, you have been sucked into the black hole and lose that ship for the next round. 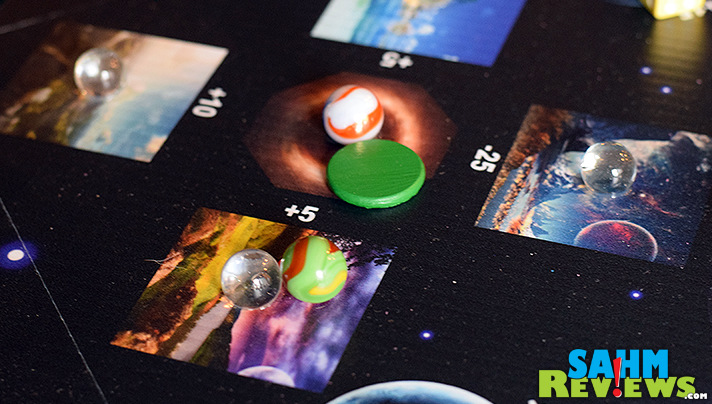 End a round on one of the four octagon-shaped areas and you are awarded a bonus round where you get to fly your ships again without interference from opponents. All scores are tallied per the amount printed on the board, with the exception of the die roll. 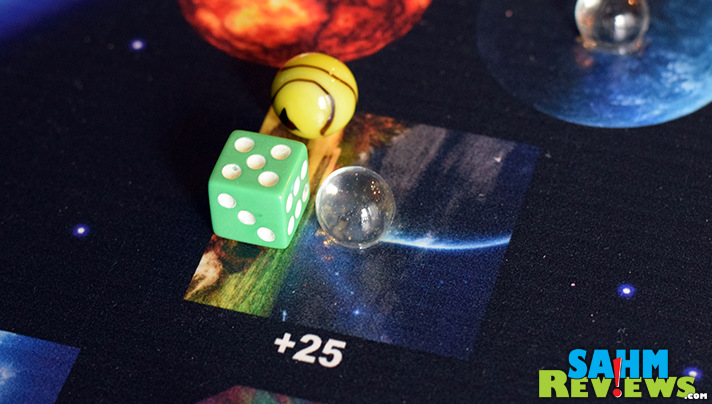 That total is also multiplied by the number rolled – getting a negative value on a die roll can be particularly bad for your score! In addition, on the bonus round you get to roll a 20-sided die, so be certain to keep it away from those negative planets. 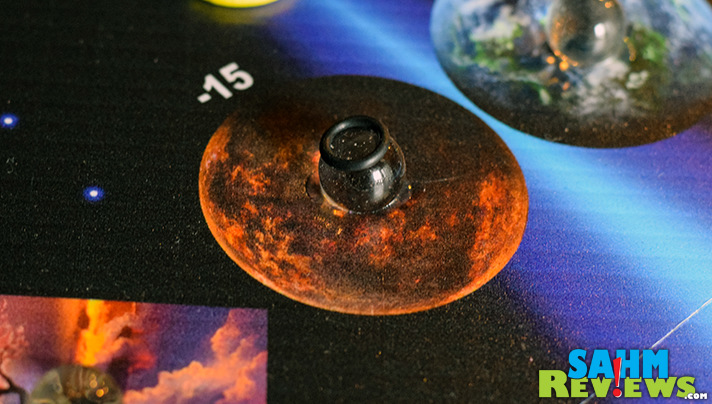 After a bonus round you are also awarded a ring to place on a planet of your choice. This planet then becomes ‘yours’ and any time someone else lands there you are awarded positive points (even if the planet is negative). Each ring is also worth five points at the end of the game.

Universe is a quick game, even with the full compliment of four players and 10 full rounds takes under an hour. It is easily a title that could be played with a wide range of ages, and quite honestly is the type of game our girls seem to always succeed at. And usually with comments about “You’re getting old dad…”

The board itself is beautifully printed (see the photos for yourself). However, not everything is perfect in this Universe. I had two issues that probably need to be overcome before I could fully recommend it as a primary purchase.

First, because you are using glass marbles on a slippery plastic surface, if your table is the slightest bit out of level or the board gets warped for any reason, the marbles aren’t going to stay on the board. And also due to the corrugated plastic, two of the players are shooting against the grain (slowing the marble down) and two are shooting with the grain (forcing the marble to run in a track). Secondly, the black rings that show you have claimed a planet – after the round is over there is no way to recall who claimed which planet (assuming multiple bonus rounds during the game). Color-coded rings are necessary and seems to be an oversight.

Those two issues aside, Universe was actually a fun little dexterity exercise and a lot less embarrassing than admitting I enjoy the old persons’ sport of shuffleboard. There is some strategy needed to determine which targets to aim for and when to use the multiplier die. The use of real marbles, which I assume are hand-applied to the board, is a neat representation of the planets and reminds me of playing marbles in the dirt as a kid. Only these I can’t knock out and win..

And for only $30, you will get a lot of value out of Universe. If this were a mass-market game using the same components (sans pizza box), I would expect it to run much more. Available directly from Diletostra on their website, take a moment to see the other things they have to offer – including bracelets and artwork!

We just received word (and samples) that the publisher took some of our suggestions into consideration and made some must-needed updates. 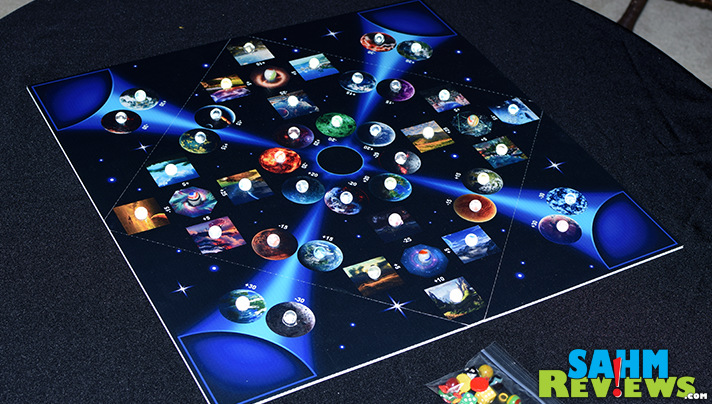 The board size was reduced slightly, which will allow for a smaller outside box and let it fit better on a standard card table. 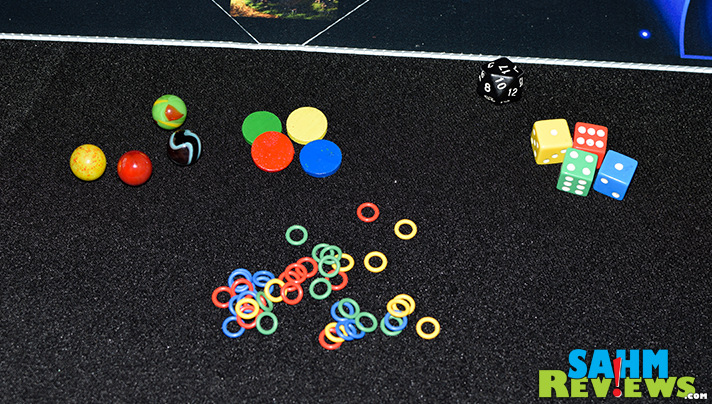 The included rings are now color-coded (as they should have been originally) so keeping track of who placed which ones is no longer an issue! This pretty well covers the few complaints we had about the first version, and even with the addition of custom rings, the retail price remains the same! There’s still time to be one of the first to own your own hand-made copy!

17 thoughts on “The Universe in a Pizza Box”