The vast majority of games we find at thrift are usually ones that were given as birthday or Christmas gifts and then played a handful of times (or not at all). Well-meaning parents and grandparents pick up something from their local Walmart or department store, really not knowing much about the game they are giving. And that’s OK. Games that make it to general retail have usually already proven their demand

Thanks to the internet, Amazon is a wonderful place to save a few dollars on your gift purchases. eBay is also a great resource for some of the hard-to-find titles that are out of print. But before these mega-sites leveled the playing field for small publishers, the only way an independent game designer could get their game into their customers’ hands was through guerrilla marketing and self-distribution.

Last Spring we told you about Py, a math game published here in our city of Bettendorf, Iowa. We’ve seen no less than five copies at our local Goodwill stores in the past year and certainly will see more in the future. This week we’re highlighting another 80’s-era game, Wandering Words, that was only available via mail order from the publisher, Jeng & Associates.

We’ve all played Scrabble at some point in our lives, and Wandering Words is an attempt to capitalize on the popularity of this classic. Similarly there are 100 included tiles with letters (and values) and a few special symbols. Four tile holders accommodate up to that many players and a plastic game board with recessed areas is reminiscent of a deluxe version of Scrabble. 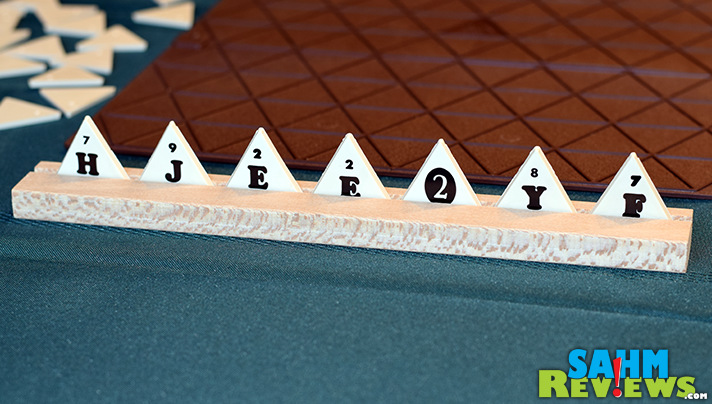 Players take turns in the same manner by drawing to fill their hand with seven tiles. Play a valid word (no proper names, abbreviations, etc.) on the board with all letters touching each other. But unlike its square-tiled counterpart, Wandering Words uses triangular tiles than can touch as many as 12 other tiles on the board. To qualify they only have to touch on a point, so even though the board begins to fill up, there is an almost incalculable number of possible word paths you can use. 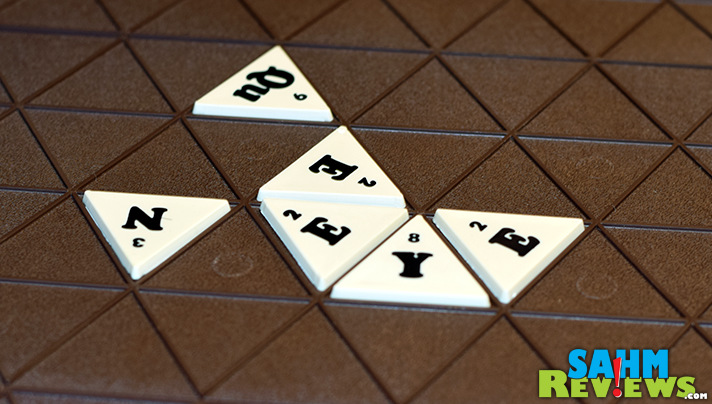 In the above example, I started the game with “EYE”, while the next player quickly got the “Qu” tile out of their hand with “QUEEN” by utilizing one of the E’s in my word. They chose to place their tiles farther out (but still touching) to open up the board for later play. 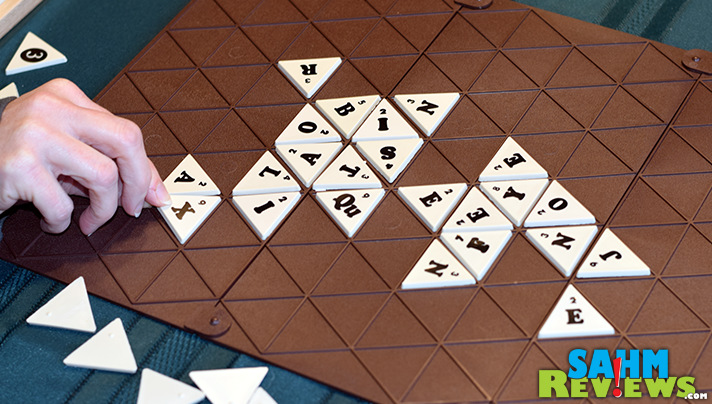 There are also a number of special tiles that when played allow you to double or triple your score, take an extra turn, steal your opponent’s word total or even make them subtract your word total from their score. 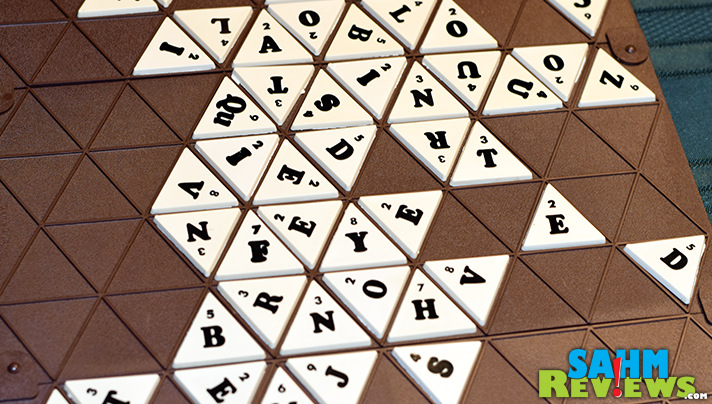 The included instructions on the box lid were very incomplete, and an online search for rule clarifications yielded very little. We chose to play these special tiles in front of us (instead of on the board) since they are one-use only. On the board they would clog up the words, and maybe that was their intention. If we ever come across some rule clarifications, we’ll be sure to update it here.

Each word scored is added to your total, and when all tiles are played (or no other plays can be made), deduct any tiles in your rack from your total and the person with the highest score wins!

Wandering Words is actually a very unique take on the standard word game. Because each letter can be paired with twelve different tiles (as opposed to four in Scrabble), finding a spot to play is not nearly as difficult. With better documentation and in the hands of a legitimate publisher, it could have probably been much more than a one-hit wonder.

You won’t find any of these on Amazon, but will occasionally see copies pop up on eBay for a reasonable price. As for Jeng & Associates – they published a couple other geometry-styled games in the late 80’s before disappearing completely. There is very little historical information about the company online, but if anyone has details about this St. Louis-based publisher, we’d love to hear from you!