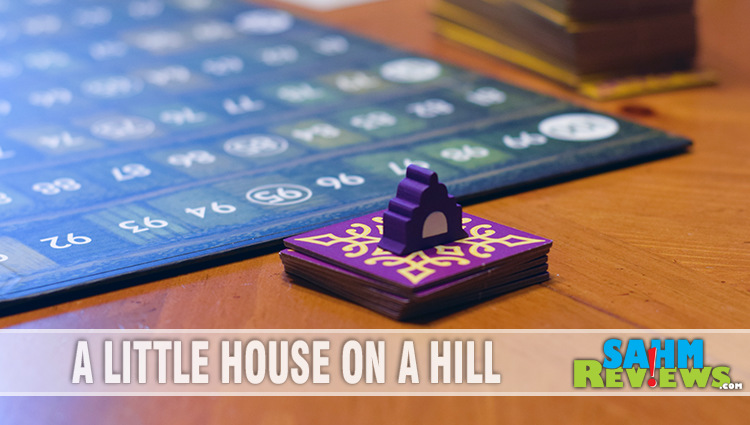 Over the past months, we’ve told you about several different games such as Hanabi, Lembitu and 12 Realms that fall into the category of cooperative play. As someone who likes everyone to be happy, I personally love this genre of game. It requires people to work together toward a common end-game goal. With a few exceptions, either everyone wins or everyone loses.

So what do you do when you have to work with two different people to build two different cities. How about if we add another twist and say you are collaborating with each individual independently while they are each working with two other people at the same time? That’s exactly the premise of Between Two Cities by Stonemaier Games. 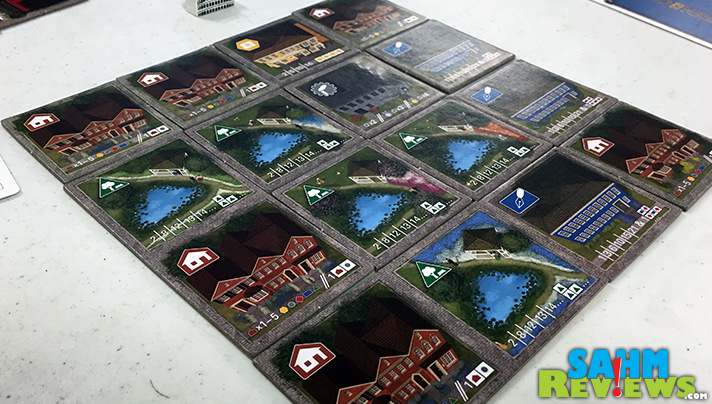 It’s not exactly a cooperative game because ultimately there is only one winner. However the premise of making decisions jointly with another individual gives it a more community feel than simply working to win a game on your own. The goal is to create two cities in a 4×4 pattern; scoring points utilizing the random tiles available over the course of three rounds. 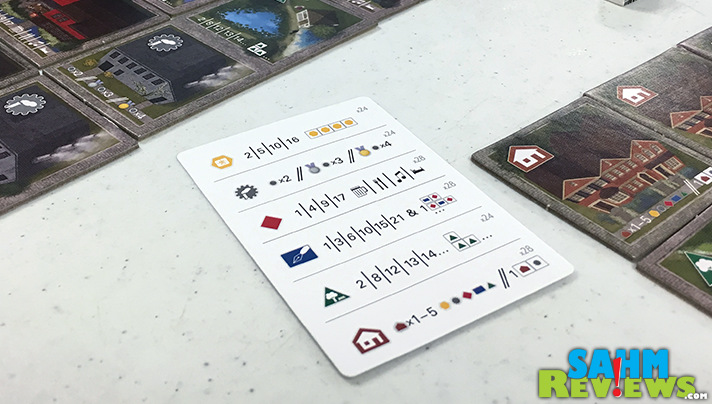 The game consists of 6 different components to building your cities: Shops, Factories, Taverns, Offices, Parks and Houses. Each awards points in unique ways with escalating values by meeting certain criteria. As an example, shops score points based on how many are in a row. One by itself is 2 points, 2 in a row awards 8 points, 3 in a row earn 10 and 4 give you 16 points. Another example is that taverns earn based on having variety of the four different types, while offices in your entire city are calculated by quantity with a bonus if they are next to a tavern. 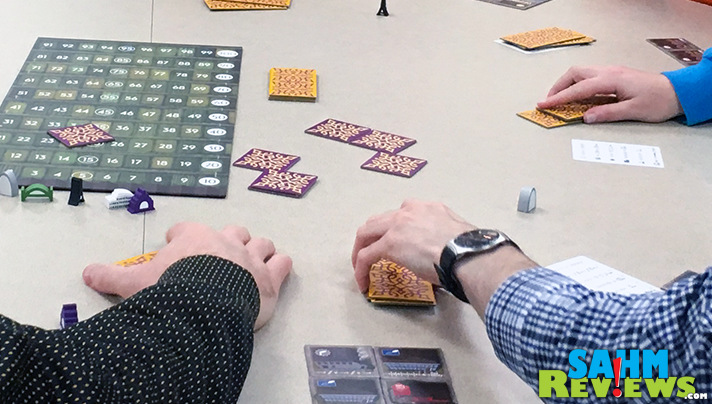 These city features are available via single tiles (played in rounds 1 and 3) and duplex tiles (played in round 2). Each player secretly selects two tiles from their pile then discards the remainder of the pile to their neighbor to use next. The tiles continue to rotate around the table each round until all the tiles are used. As I previously mentioned, each city is 4 tiles wide by 4 tiles high. Single tiles are exactly that, single. Duplex tiles are two random tiles joined together either vertically or horizontally. The trick is to add them to your city keeping their direction consistent with the rest of the tiles without exceeding the 4×4.

The problem is that you – and your partner – are each selecting tiles to divvy between two cities simultaneously. While you may envision a city filled with shops and offices, your partner may be grabbing parks and houses. The trick is to line things up in hopes that the tiles you need circle around to you. 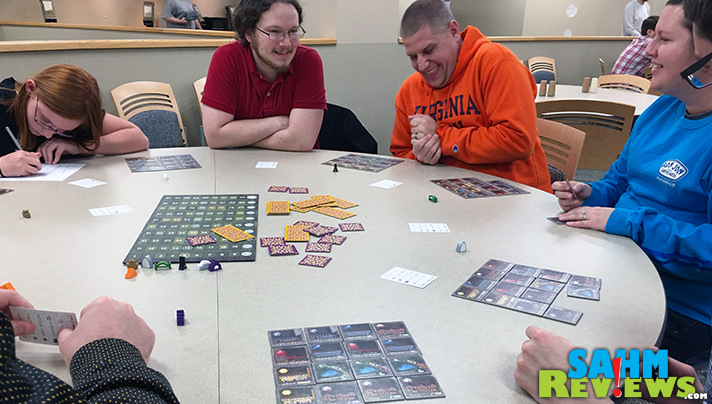 Of course, the entire time that you’re trying to build up your city, the people next to you are trying to do the same. With each player having two tiles to choose from – one for each city – there ends up being a lot of encouragement to get your partner to add the piece YOU want to the city you share versus adding it to the one shared by the person on the other side. Sometimes talking your partner into the tile you need can be the difference between a win and a loss. 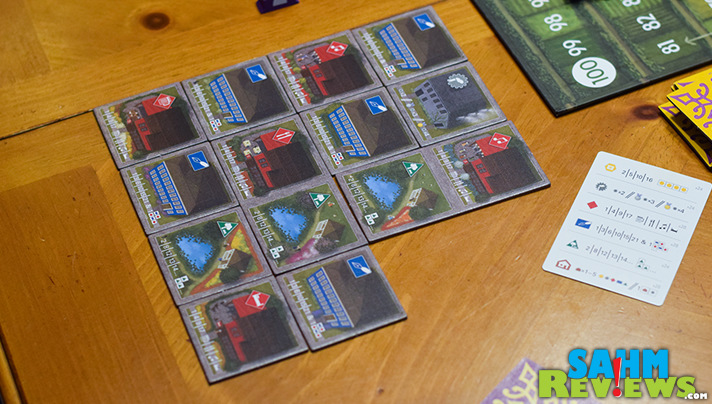 So let’s talk about scoring. You may be thinking that winning is as simple as sandbagging one of your cities. Wrong. Similar to Why First?, it isn’t about coming in first. Each player’s score is determined by their LOWER scoring city. Ultimately, each player needs to keep both cities balanced to get both to have the highest score possible. The winner of the game is the person who has the highest lower-scoring city.

We’ve played Between Two Cities numerous times and have yet to tire of it. Because each game involves collaborating with different individuals and involves some degree of randomness, the replay value is high. Stonemaier Games continues to produce high quality games that appeal to a variety of personality types! It’s a fun game that would make a great gift idea even for the non-gamer in your life! Keep up to date with their latest news by reading Jamey Stegmaier’s website or following him on Twitter or visit Stonemaier Games on Facebook and Twitter.

It’s been a couple years since we introduced you to Between Two Cities and since that time it has continued to make it to the table at our local game meet-up. That’s the mark of quality games – ones that continue to get played even when the hype of being new wears off. To ensure that games remain relevant to current game styles and interests, publishers often introduce updates or expansions. Stonemaier Games recently released Between Two Cities: Capitals as a way to keep it fresh.

You’re probably curious what Between Two Cities: Capitals introduces to the base game. The primary function is to bring three new challenges including landscapes, districts, and civic buildings. Staying true to the original, it is designed for 3-7 players with 1-2 player variants. Between Two Cities: Capitals includes 7 Landscape mats, 7 District Cards, 21 Civic Building Tiles, 3 District Scoring Tiles, 7 Player Aids and 7 Pairs of City Tokens. All the Building Tiles will be mixed in with the base game tiles during the setup process. 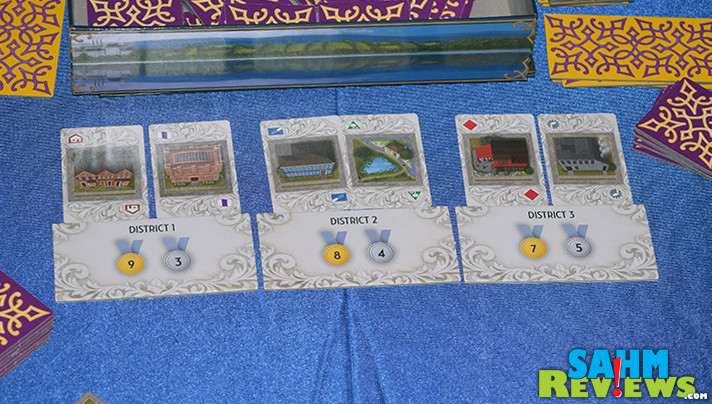 First, there are District Scoring Tiles. These tiles are placed in the center of the table within view of all players and two District Cards are randomly assigned to each scoring tile. These offer an additional scoring option beyond the traditional scoring. The two cities with the largest contiguous of each type of tile earns the points denoted on the associated Scoring Tiles. 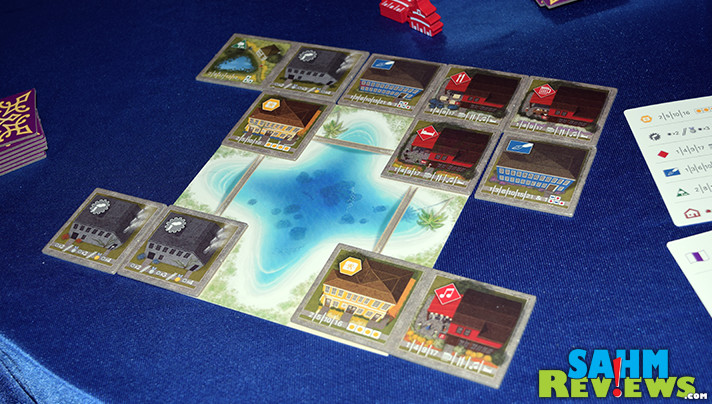 Next is the inclusion of the Landscape mat. It includes five spaces that cannot be built upon. One is randomly dealt to the area between two players. At the beginning of each round, instead of drawing seven tiles like in the base game, players will now draw nine. You’ll be utilizing the Landscape mat to build out a 5×5 grid. These new obstacles give each team a unique setup that helps diversify the experience from one board to the next. 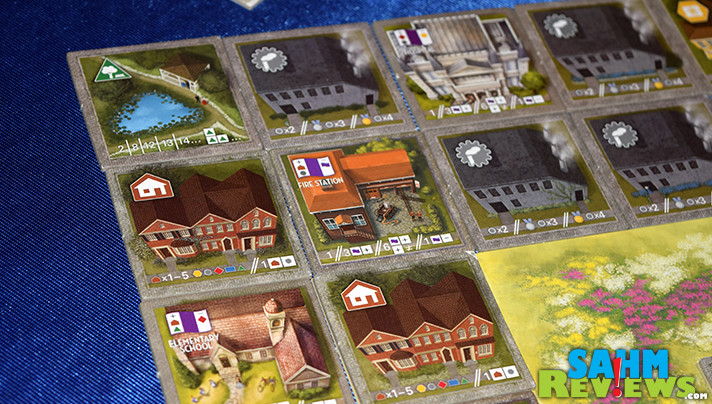 And third are the Civic Buildings. These are what will have the most impact on how you place tiles in Between Two Cities: Capitals. Each of these unique tiles include buildings that you would typically see in a city but weren’t included in the original game. Examples are a Police Station, College, Post Office, Elementary School and Market Square. These are handled In the same way that Industries and Houses couldn’t be placed next to each other in the base game… except more! Each Civic Building Tile includes two types of buildings that provide a positive impact along with one type that causes a negative impact. If it’s placed next to a tile of the negative type, it scores only one point. However, if it’s placed next to only positive or neutral tiles, it can score up to six points!

These various changes give Between Two Cities a lot more depth as well as make it less predictable on what ways you can configure the various cities. If you enjoyed the base game, this is a great upgrade and extremely affordable at under $14. If you haven’t tried the original, all I can say is… do! Then once you familiarize yourself with it, try the Capitals expansion.

Are you good at collaborative game play or do you thrive on flying solo?