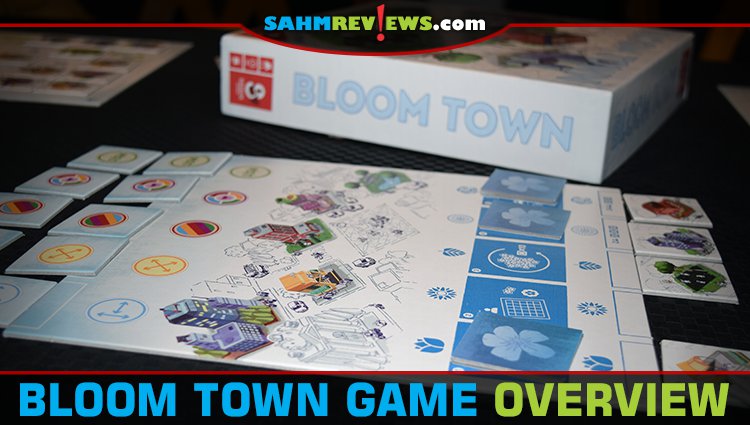 A good portion of the decision-making process we go through when buying a new board game involves consideration of the game’s designer(s). There are a few whose games we will pick up even if we don’t know anything about the title. I personally am a fan of anything Stefan Feld creates and proudly own the majority of his games, including Aquasphere, Bora Bora and Luna.

When you find a game that you really enjoy, we encourage you to research other titles created by the same person or team. Just like a book – if you enjoy a title by an author, there’s a better than average chance that you’ll also relish other works by them. The same thing applies to board games. Using the search feature on BoardGameGeek, you can generate a complete list of everything a particular designer has had published!

Two games in our collection that we regularly play are Frogriders and Copenhagen. Two very different games, each with their own strengths. One’s an abstract-styled game where you’re jumping frogs over each other while the other challenges you to put a facade on a tall building. And they’re published by two very different companies. The one thing they have in common is they were both designed by the team of Asger Harding Granerud and Daniel Skjold Pedersen. Following the success of these two games and many other solo and combined works, including Spiel des Jahres nominee Shaky Manor, these two men have formed a new publishing label!  Sidekick Games is their new endeavor and they have released their first title, Bloom Town! Once again, it is different from the other games you’ve seen from this pair. 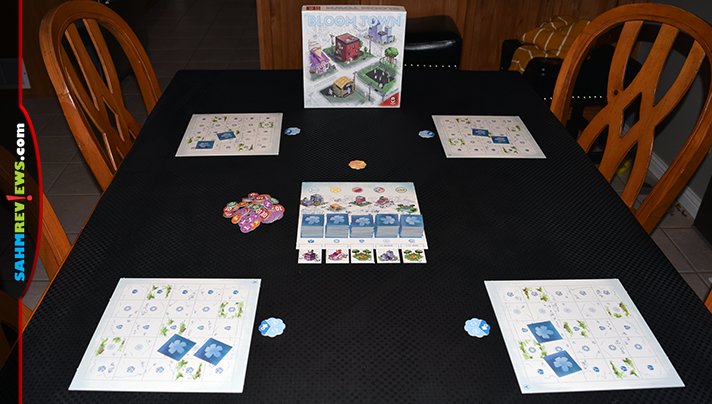 Bloom Town is a city-building tile-laying game that will remind you a lot of Between Two Cities or Warsaw: City of Ruins. Each player begins the game with an empty town board, a bonus token and two face-down building tiles at random. Community tiles are shuffled into the remaining building tiles and are divided into stacks (depending upon the number of players) and placed on the town square board in the center of the play area. 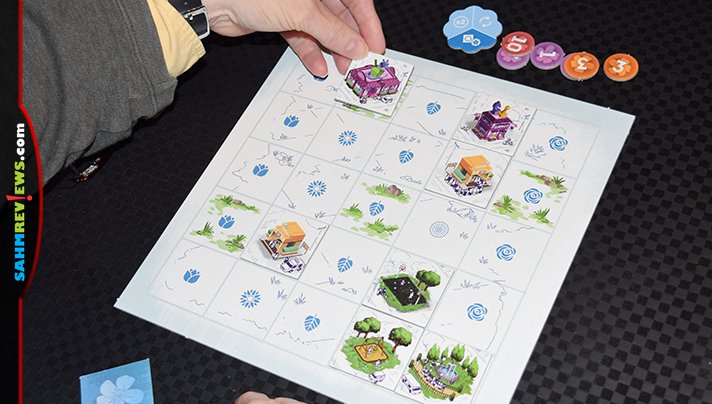 On your turn you will simply play one of the two building tiles in your hand to your town board. You may place it on any empty square on the board, taking note of the flower icon you’re covering up and then immediately scoring the tile. Take a new building from the space in the market (town square) matching the icon of the flower you covered. Reveal a new tile from the stack and put it in the empty space in the market. This ends your turn. 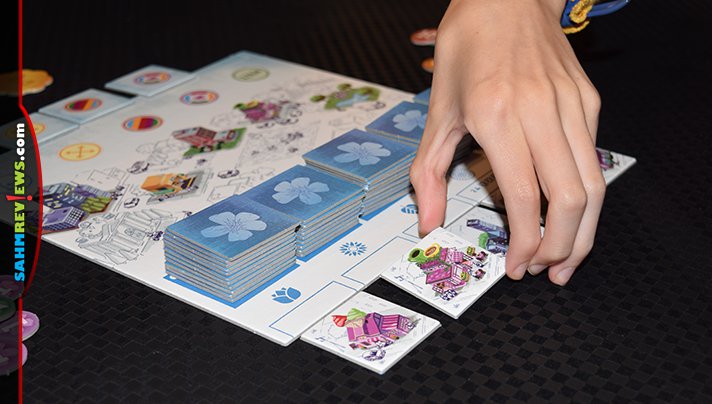 Scoring on each turn is where you’ll earn most of your points. Each tile type (offices, subways, parks, homes and shops) scores differently and depends on tiles adjacent to the one you are placing. For instance, if you place an office tile, you’ll receive a point for the tile you place plus an additional point for all connected office tiles in the same row and column. Homes receive points for different types of tiles immediately adjacent to it, while parks score the best when they are in groups of three. 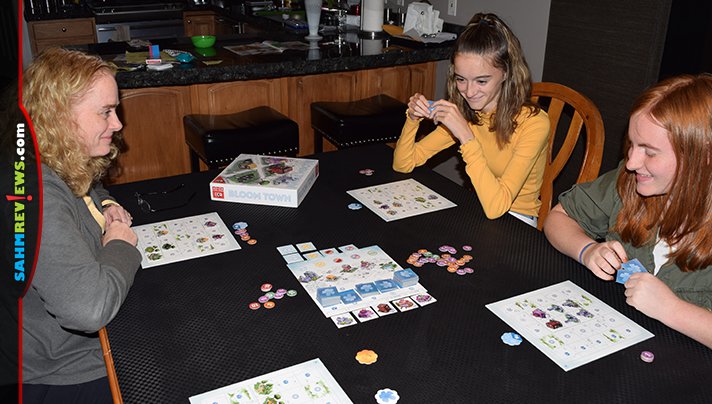 Certain spaces on your Bloom Town board have extra growth on them and are referred to as “blooming squares”. When you build in one of these areas, you are awarded with an extra reward on the same turn. You may either score double the points for the tile you just built or may elect to take an additional turn immediately without refilling the market until the end of your complete turn. All players also have a bonus token that you can use once on any turn to also score a tile twice, take an extra turn or trigger community scoring (rescoring) for one type of building if it hasn’t been rescored yet (more on this in a second). 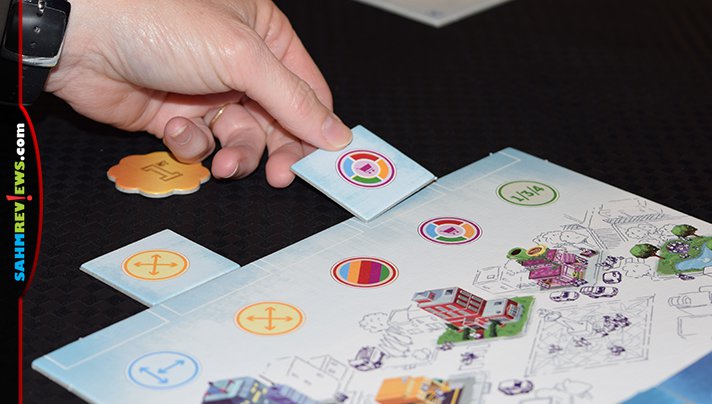 When you’re drawing new tiles from the stacks to fill the market, community tiles will be revealed. When this happens, it is placed face up in the community area and the market place is refilled. There are two of each type of community tiles (same types as the building tiles), and when the second example of one is revealed, rescoring occurs for that tile type. 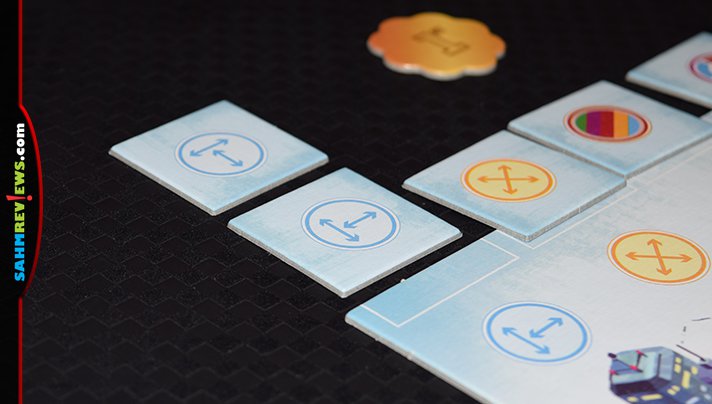 During rescoring, all players score all tiles of that particular type that have already been placed on their personal town boards. Rescoring rules are slightly different, with offices, subways and parks scoring 2 points per tile and homes and shops scoring in the same manner as regular scoring. 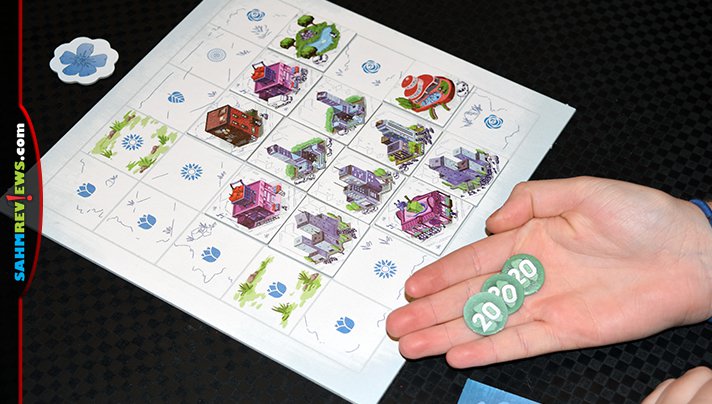 A game of Bloom Town ends when two of the five stacks of tiles are depleted (three in a 2-player game). Each player will have two tiles left in their hand and may choose one they want to score again and discard the other. This isn’t a regular score, but a rescore of all the buildings on your board of that type! The person who has collected the most bloom points over the course of the game wins Bloom Town!

Bloom Town is designed for up to four players, plays in around 30 minutes and is advertised for ages 8+ (which we feel is accurate). You can find copies exclusively at Walmart stores or on Walmart.com for under $30! If you’re curious about what this duo is working on next, be sure to visit Sidekick Games’ website or follow them on Facebook and Twitter so you’re the first to know!