Well, it was bound to happen. We got news last week that our Independence Day plans have been cancelled. The band directors at school notified the kids they wouldn’t be marching in the Fourth of July parade this year. We also heard on the news that the fireworks show had been cancelled. I understand the concerns for the parade because so many people gather so closely, but… the fireworks? What’s with that? They’re shot from a barge on the Mississippi River in between Davenport, Iowa and Rock Island, Illinois. People can see them for miles so it wouldn’t be hard to social distance and watch them. Heck, I even remember watching them from our house when I was growing up and we lived around 20 miles outside of town. It’s not the same as being right underneath them, but it was obviously memorable nonetheless. Alas, everyone has been faced with making difficult decisions and I’m sure this one wasn’t easy for the coordinators. I get it. So we’ll plan on staying in and watching fireworks at home. In our kitchen. On our game table. We’ll grab a few firework-themed games and make a night of it! In addition to Hanabi and Lanterns. Included in the list is a new one – Fireworks from Renegade Game Studios. 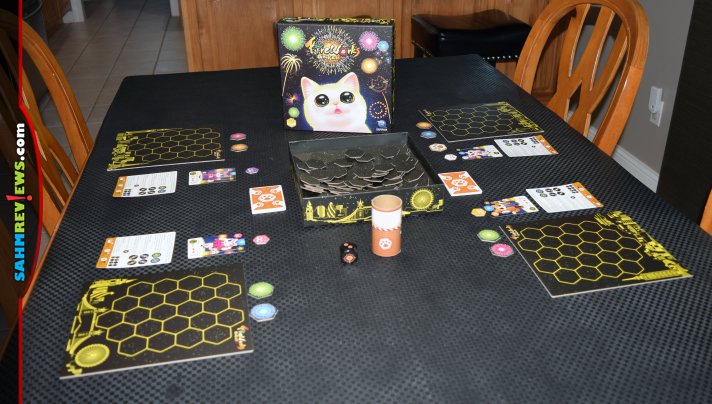 The name sure is appropriate, isn’t it? So is the game since you spend the entire time assembling fireworks for your individual city. To set up the game, you’ll remove all the contents from the box then place the bottom of it in the center of the table. Give each player a city board, player aid, start tiles of two different colors and one random character card. Utilizing all of the non-starting tiles, you’ll shuffle then place them face-down into the box. Remove the “1” action cards then shuffle the remaining. Separate the stack into two individual decks and place on on either side of the box. Give the start player token to whomever is going to be the first player. Take the “1” action cards and any unused start tiles, city boards and character cards and return them to the, oh wait. Set the unused components out of the way. 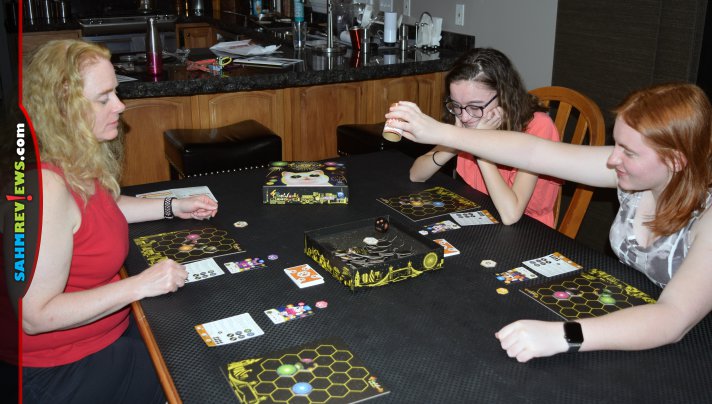 Each player will begin by placing their two starting tiles in any two spaces on their city board. Don’t get too caught up on where though because they aren’t locked in. I’ll explain that more in a minute. You’ll be rolling the die, collecting tiles from the game box and assembling fireworks. Get ready for the “oohs” and “ahhs”! 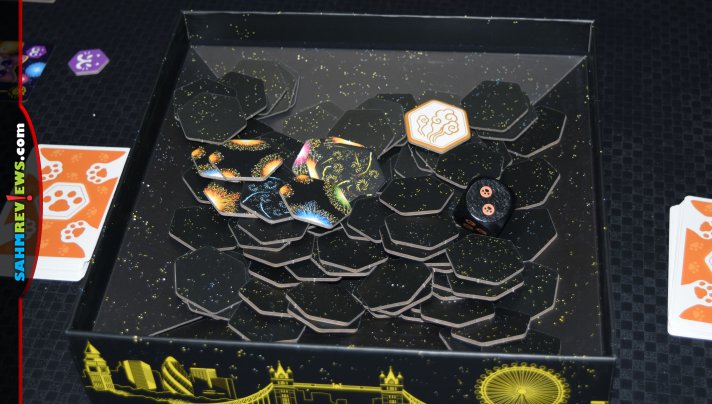 Starting with the first player and continuing clockwise, each player will take their turn at rolling. Put the fireworks die in to the launch barrel and hold it at least 18 inches above the playing surface. Then you’ll drop the die into the sky box. If at least one of the tiles flipped face up then it’s considered a successful role. If no tiles flipped then it’s a fail. For a successful role, look at the results of the die. If you see paw prints (1-3) then you’ll select that many of the face-up tiles in the box. If there are more than that number flipped then you’ll leave the excess there. If there are less revealed tiles than paw prints then you’re out of luck and will only get the one that’s available. If the die shows a firework symbol then you’ll take one tile and launch again! 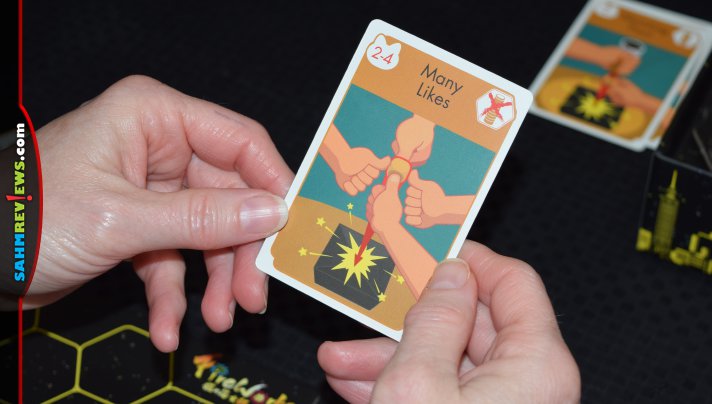 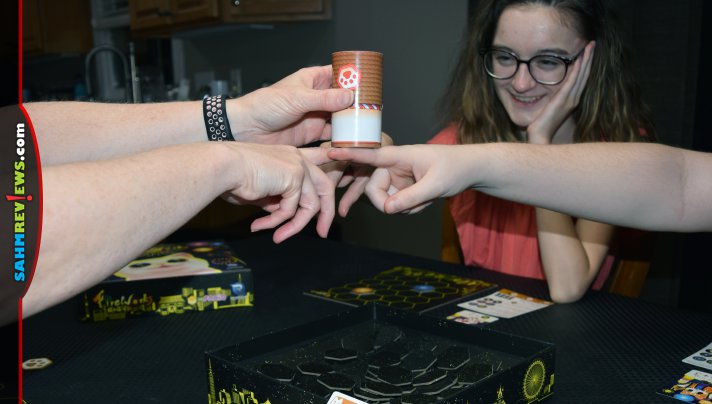 You’ll also abide by the card’s instructions on how to launch the die into the box. After rolling, instead of taking the number of tiles based on the die results, you’ll take one. Then the first player clockwise from you selects one. You’ll proceed back and forth until you’ve reached the limit shown on the die. In addition to different types of fireworks on the tiles, some will have functions that alter the game play. Some have players swapping tiles, others require you to discard. A fireworks tile allows the active player to take an additional turn. 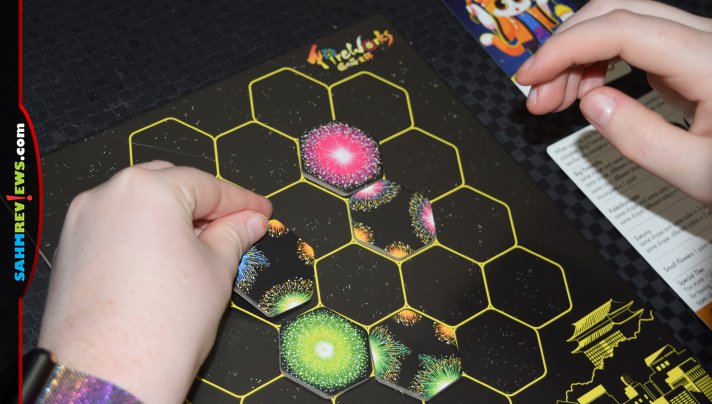 Once you’ve selected your allocated tiles, you place them on your board. Unlike games like Bloom Town, Castles of Mad King Ludwig and Planet, you aren’t stuck with your original choice. At any time, you may rearrange your fireworks tiles in your city. This is important to know because the different types of fireworks patterns you’re able to create are worth varying amounts of points. In addition, character cards change the scoring some.

Once a player has filled their entire board, play continues back to the first player to ensure everyone has an equal number of turns. The player with the most points earns the right to design the fireworks display for their game group. Grab a copy in time for Independence Day. You can check with your local game store, purchase direct from Renegade Game Studios or order from Amazon. This might not be the traditional way to watch fireworks, but at least you don’t have to worry about noise ordinances (well, unless your game group is rowdy), parking issues or rain!

What are your plans for this Independence Day?