Remember how excited I was a couple weeks ago when my game grew off the table in Kodama 3D? We enjoyed the nature experience and decided to continue the theme with more games. We finally decided to start returning to some sense of normalcy and got together with a couple friends to play games. They wanted to play Everdell from Starling Games and I certainly wasn’t going to complain about that. I mean, the game revolves around a giant tree and that’s pretty cool. 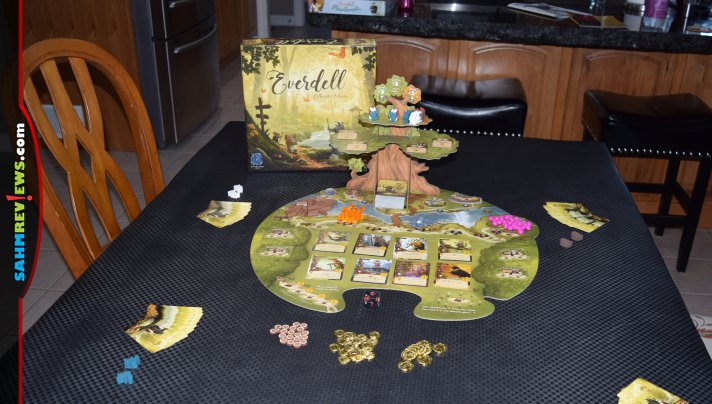 When you are ready to play, set the board up and set the assembled tree at the top of the board. Place it slightly off-center on the table so that all players are able to see the board and front of the tree. Each player selects a color and takes two of the critters. Additional workers are added to the upper branch of the tree. Create general pools of twigs, resin, pebbles and berries on their designated spaces on the board. Shuffle the Event, Meadow and Forest cards independently. Randomly select three or four Forest cards (depending on number of players) and add them to the cleared spaces on the edges of the board. In addition to adding the four basic event tiles to the base of the tree, you’ll also place four special Events on the lower branches. Unused Forest and Event cards will be returned to the box. Place eight Meadow cards in the field. The balance of the deck nestles into the center of the tree trunk where players draw a number of cards for their starting hand based on their turn order. Can I reiterate how cool the tree is? 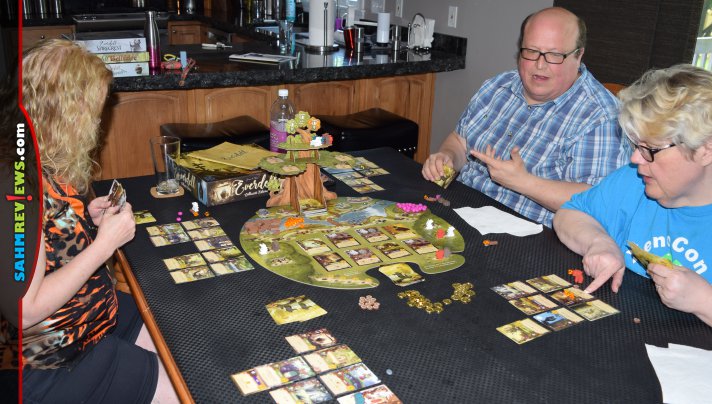 The object of Everdell is to design a 3×5 city consisting of critters and construction cards. On your turn, you’ll do one of the following: Place a worker, play a card or prepare for the next season. 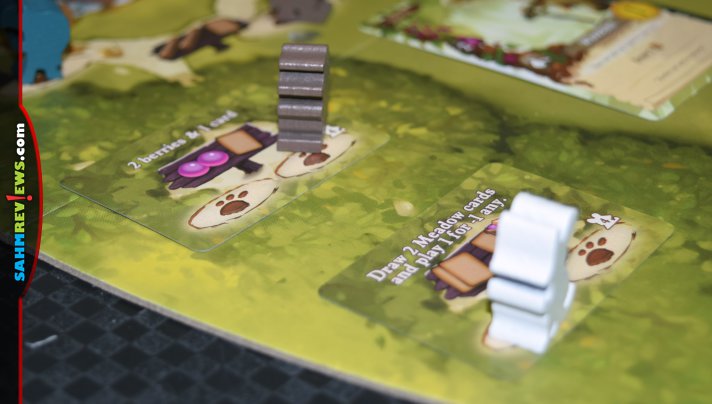 As I mentioned before, you begin the game with only two workers and zero resources. You can gain resources by placing your workers on various locations on the board including in the forest and spaces designated for resources. Workers can be placed to acquire resources and/or additional cards or even to discard in exchange for resources. 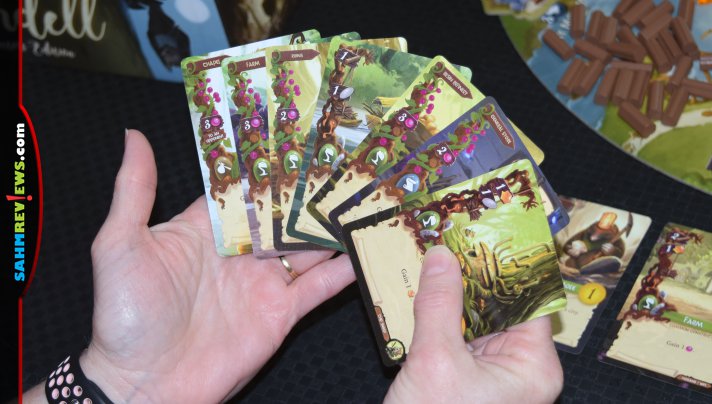 As an alternative, you may play cards. There are five types of cards including Destination, Traveler, Governance, Production and Prosperity. Traveler cards take effect immediately, as do Production cards which also reactivate during spring and autumn. Destination cards provide an additional location to visit with your worker and Governance cards offer bonuses such as discounts on purchases. Finally, Prosperity cards are opportunities for end-game scoring. 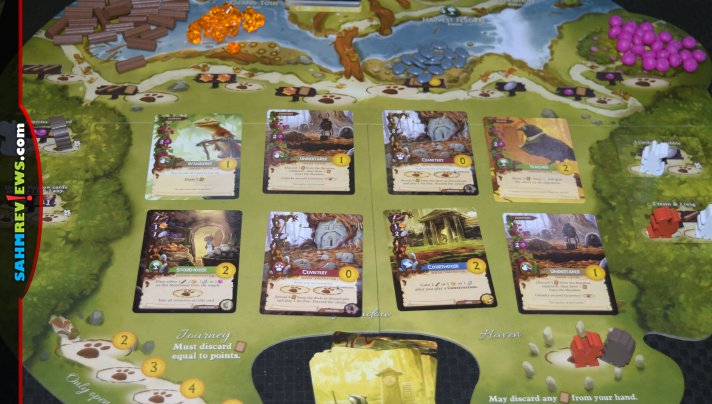 If you have the necessary resource requirements as noted on the left side of the cards, you may utilize your turn to “build” the card into your city. With a hand limit of only eight, you may not have cards that offer the most benefit for your city. Fortunately, the Meadow is filled with eight community cards that are available to all players on their turn. There will be times you opt to play from your hand while other times you’ll grab from the Meadow. 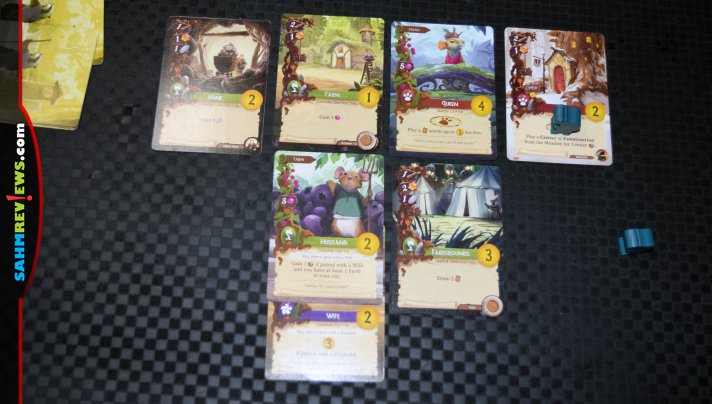 When you place a card, you pay the required resource fee then take the necessary action (if applicable). The gold circle with the number indicates the value of that card at the end of the game so in addition to considering the benefits a card offers, you’ll also want to factor in the points. Of course, it’s important to make note of the event cards that are an additional potential source of points at the end of the game. These are typically a combination of unrelated critters in the same city or a specific quantity of a certain type. 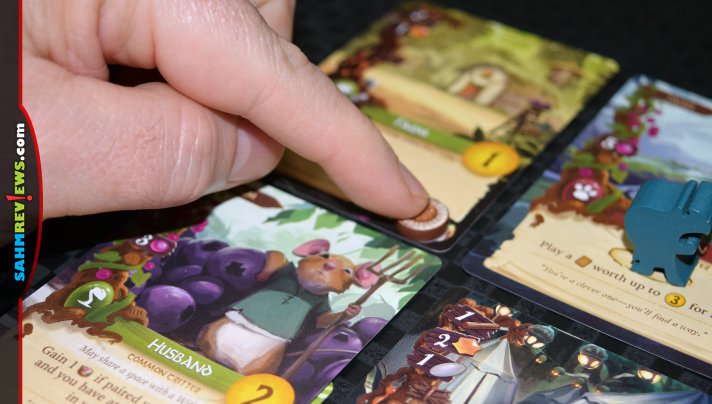 While there are cards that offer players discounts on purchases or even free cards up to a certain value, there are several opportunities to gain a free critter! Since your city area is limited in size, you’ll have to decide whether that free critter will provide enough value and benefit. Of course, you may even find that luck is not on your side and the cards you need end up in opponents’ hands (or cities) instead. 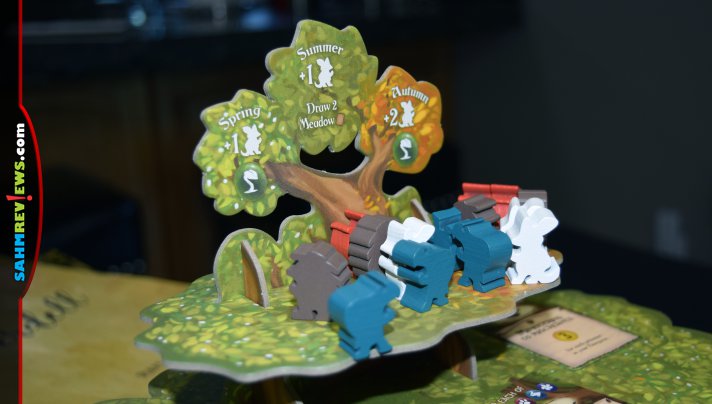 At any point, you may opt to forgo placing workers or playing cards and prepare for the next season. When this happens, you’ll take the seasonal bonus (draw cards in summer and activate Production cards in spring and autumn). You’ll also get to recruit additional workers for future rounds! The game continues until all players have filled their city and/or passed and a winner is determined. There’s a lot going on in Everdell, but it’s not an overwhelming game. With fun artwork and cards that are easy to understand, it’s definitely a game that can be played by gamers younger than the recommended aged of 14. Once you’ve mastered the Everdell base game, you can add additional resources, critters, weather and more with the Spirecrest, Bellfaire and Pearlbrook expansions. Learn more about additional expansions, new titles and Kickstarters by following Starling Games on Facebook and Twitter.

Have you played Everdell yet?