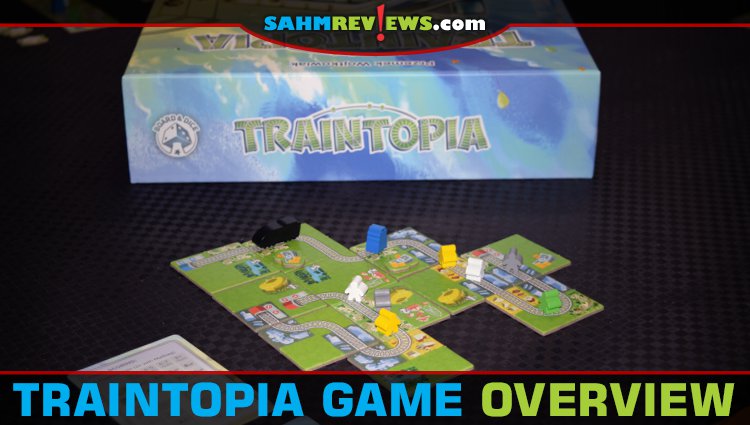 We have a very good friend who is a regular part of our gaming circle. If you ask her what her favorite type of game is, she would not reply with a mechanic like dice-rolling, abstract or engine-building. She would proudly exclaim that she loves any games about trains. I’ve never asked where the fascination came from, but know that if anyone asks, “Who wants to play Ticket to Ride?”, she is the first to raise her hand.

We’ve introduced her to a number of new train-themed games over the years. Railroad Rivals, Trainmaker and Whistle Stop come to mind as games she enjoyed immensely. She is not, however, a fan of the multi-hour stock-centric train games known as 18XX games. Knowing her dislike for these marathon titles, we were excited to be able to tell her all about a new 30-minute train-themed game by Board & Dice, Traintopia! 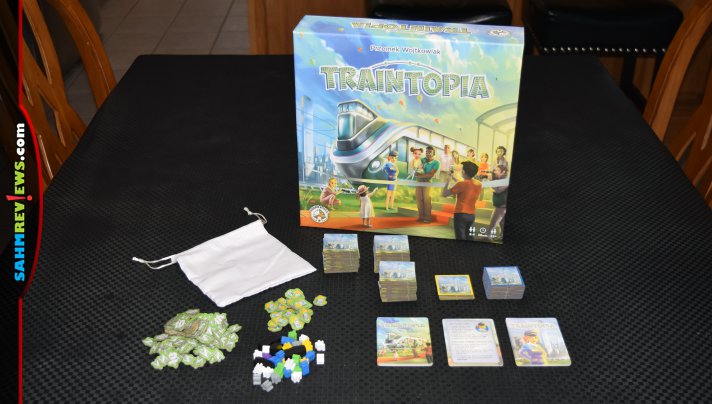 Traintopia falls into a game genre known as tile-laying. Each person will be building their own tracks (and city) by drafting tiles from a common pool. Adding bullet trains and mailbags to the routes, along with attracting commuters and tourists will help you score more points. Obviously, that’s the goal!

Setting up for a game of Traintopia is pretty quick. Map tiles are shuffled and put into a stack. Bonus tiles are dealt out face-up to the center of the play area. Round cards (depending upon the number of players) and Objective cards are also shuffled into individual draw decks. Each person is dealt one Objective card from the deck, which they keep hidden from all other players. The End Game Bonus card is populated with matching wooden pieces and placed near the decks. Wooden meeples representing commuters are put into an included cotton bag. The rest of the wooden pieces (tourists, trains and mailbags) are arranged into piles within reach of everyone. All players are given a player aid card at random and the person who receives the one with the conductor symbol on it becomes the first player. 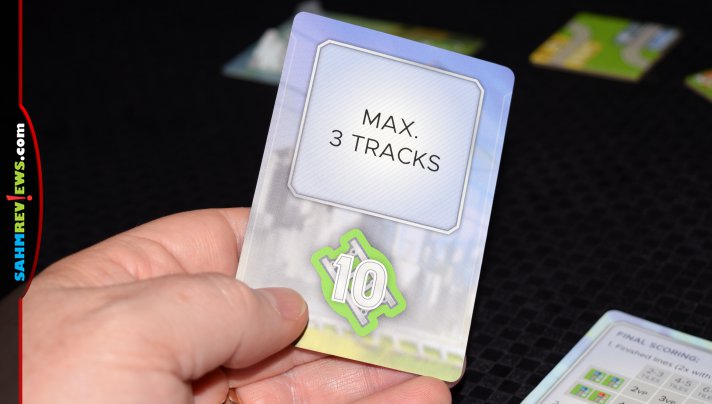 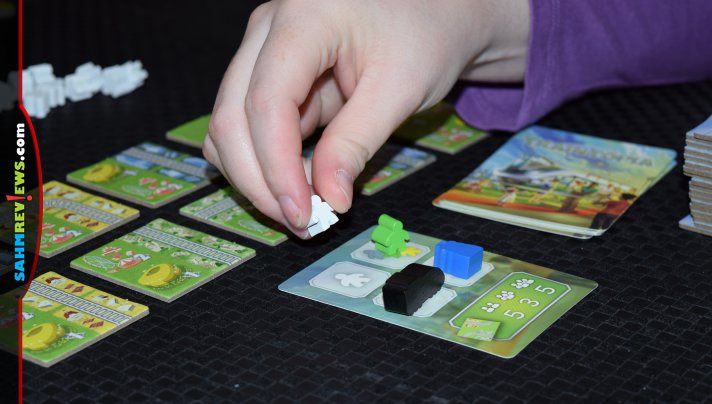 Traintopia is played over rounds, controlled by the Round cards. With a new one revealed each time, this will dictate how many map tiles and additional elements are available for drafting and will vary by the number of players (listed at the bottom of each card). Deal out Map tiles equal to the number shown and populate the top of the card with any wooden elements shown. For commuters, draw one at random out of the bag.

In clockwise order (and not reversing), players will draft either a tile or wooden element from the available pieces. Turns go around the table until everyone has drafted two items and there is only one thing left (which is discarded). If drafting a tile, placement is very easy. Rotate it however you wish and set it into your city, making sure at least half of one side of the tile is adjacent to another tile without overlapping. There are really only two main restrictions for placement. You can’t create dead ends in a track by running it into another tile and you may not make a loop out of your track. Ideally, you’re trying to create a track that is capped at both ends by a Station. 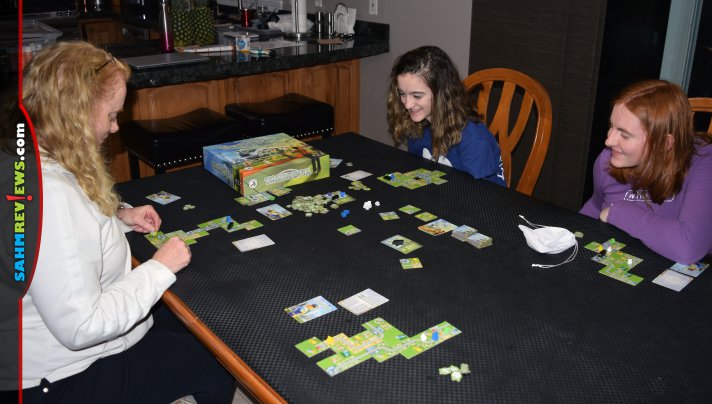 Choosing a wooden element (commuter, tourist, train, mailbox) calls for some strategic thinking. Each type is scored in its own way, sometimes immediately, others at the end of the game. When placing a Commuter on a track, you will immediately score for every district (the colored squares on the tiles) the track runs through that matches the color of the Commuter meeple. Tourists act similarly, but instead of colored districts, receive points immediately for landmarks adjacent to the train track (stadiums, fairs, parks, etc.). 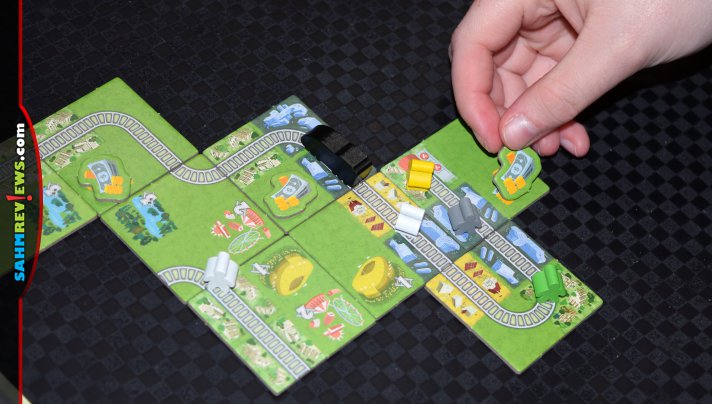 Mailbags and trains score at the end of the game. Mailbags earn varying levels of points as long as they are on a finished track (Stations at both ends) and increase with the length of the route. The color of the Station matters also – you want two different colors for double the points! Trains earn based upon how many money tokens are still adjacent to the track at the end of the game. Whenever you lay a tile with a money icon, you will place a money token on it. You may elect to leave it there for the duration of the game, spend up to three on any turn to purchase one of the bonus tiles, change the color of a Commuter token before placing it on the track or draw a new Objective card in hope of using it to replace your current one.

At all times, each track may only hold one example of each item type. Different colors of Commuters may use the same track, but if tracks were to merge, remove any duplicate examples of items and return them to the supply. Once the last Round card is discarded (signifying the end of a round), the game of Traintopia is coming to its end. Everyone computes their victory points collected during the game and compares them. The person with the fewest will get to select one of the bonus items on the End Game Bonus card. The next-lowest selects second, and so on. 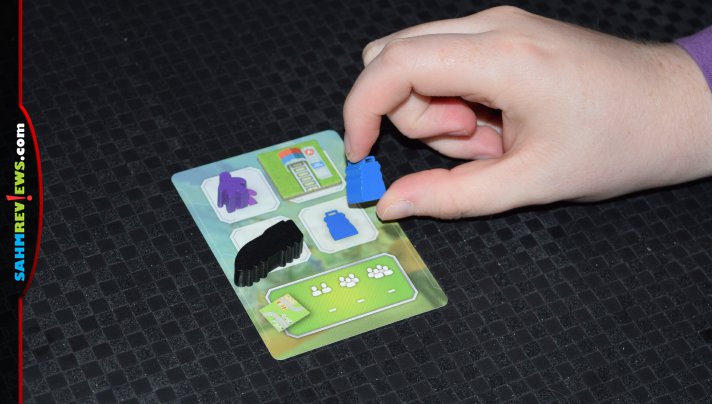 This card includes some special items. The Railhead is a special Station you can add to any unfinished track. A Railway Inspector acts like a wild Commuter, allowing you to score any one district color on the track in which they are placed. There is also an additional Mailbag and Train, which score in the usual manner. Once everyone has placed their bonus item, final scoring commences. Points are collected for the Mailbag and Train tokens and added to collected victory points. A bonus for the longest track (complete or incomplete) is awarded based upon the number of players. The person with the highest overall total wins Traintopia!

As advertised, our plays of Traintopia have averaged to right around 30 minutes. Rounds go by very quick and are only limited by the amount of Analysis Paralysis exhibited by the players. While targeted at players 12+, we feel confident in recommending it for kids as young as 8 as long as there is an older player present to explain the rules. Ask for Traintopia at your favorite local game store or pick up a copy direct from Board & Dice or online from Amazon. Be sure to check them out on Facebook and Twitter to find out which routes they’ll be taking next!

What is your all-time favorite train-themed game?