Science and space exploration have made immense strides in my lifetime. Many have been positive while some have been somber. My list of memories relating to these topics is extensive, but here ones that left the biggest mark on me. I remember my high school Latin teacher letting us watch the Challenger launch during class only to see it explode shortly after takeoff. Then a couple decades later witnessing Columbia’s demise during reentry was a reminder not to take space exploration for granted. Space discovery extends beyond space shuttles though. When I went to school, there were nine planets in our solar system. But in 2006, Pluto lost that classification and science classes revised their lesson plans to teach about only eight. I watched countless F-117 Nighthawk Stealth Fighters fly overhead when we lived in Palmdale, California and more recently stood atop the S-1C Static Test Stand that was used to test the Saturn V in 1965-66. It’s hard to believe that these things were unheard of when my grandmother was born. And it continues to advance and grow. Like something out of a science fiction movie, a whole new generation was recently able to witness the next step in space travel when SpaceX became the first commercially made spacecraft to leave this earth and deliver astronauts to the International Space Station. While I don’t expect to see average people boarding commercial space flights, I can embrace the idea through games like The Crew: The Quest for Planet Nine from Kosmos. 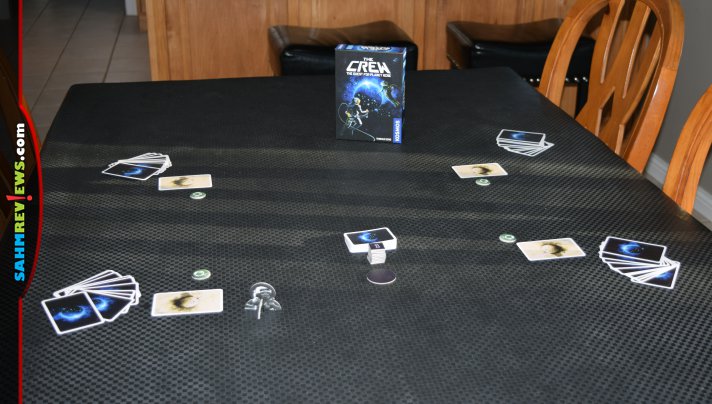 The Crew is a cooperative trick-taking card game. Designed with 50 missions, you should not expect to complete the entire game in one sitting. Actually, it’s meant to be done in stages as you absorb and enjoy the story that goes along with it. The first few missions only take about five minutes while later ones are more in-depth, incorporating more bells and whistles. The setup will vary slightly from mission to mission, but for the most part, you can expect to do the following. Shuffle the large cards and deal them out to all crew members equally. Provide each player with a radio communication token and reminder card. Shuffle the small task cards and form a deck. Place the distress token face down. 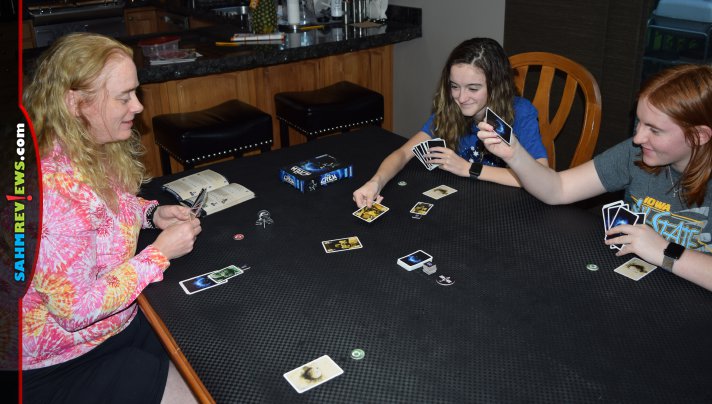 Most missions include tasks that you’ll need to complete in order to claim success. Failure to meet even one of those and the mission needs to be scrapped. After everyone has their cards in hand, turn over a number of task cards as identified by the particular mission. Place those in the center of the table for all to see. Beginning with the player who holds the #4 rocket card and moving clockwise, you select a task card that you feel you’ll be able to accomplish. In other words, you think you have the cards available to take the trick that contains that card. 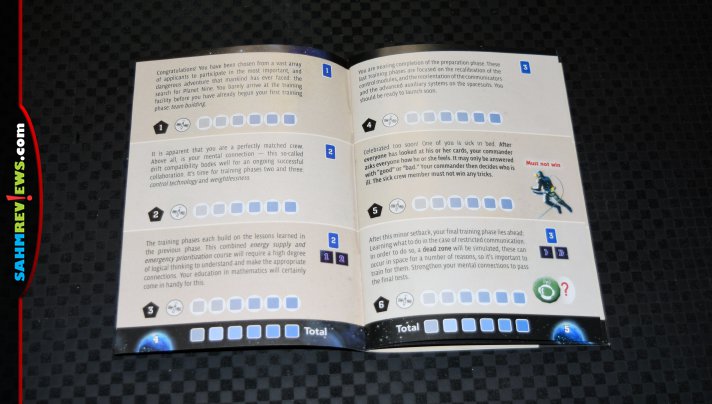 The Crew offers you the opportunity to experience 50 missions that vary in difficulty. You may select your current mission either in story order or willy-nilly from the list. As long as you understand the concept, you will be able jump into any mission. However, if you want the true experience then do them in order. The first couple only last a few minutes anyhow as they train you on how to play.

At it’s heart, The Crew is a trick-taking game. But since it’s cooperative, it has a completely different feel to it. Each player will have a hand of cards of different suits and numbers. In addition, there are several rocket cards that act as trump. High card of the lead suit will win unless a rocket (trump) card is played. The player who takes that one leads the next trick. These general rules are similar to what you would experience when playing games like Hearts, Spades, Euchre and Pinochle. 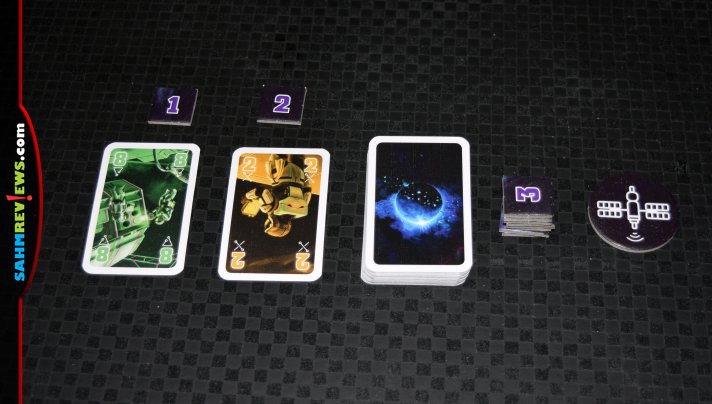 But here’s where things get interesting. Since it’s a cooperative game, you need to have a goal and those come in the form of mission tasks. When you start the mission, you’ll look at the logbook and draw cards based on the mission’s requirements. Starting with the commander (the person with the #4 rocket) and working clockwise, each player selects one of the mission task cards they think they’ll be able to collect by successfully claiming the trick that contains it. If someone else collects your task card then the mission ends immediately as a failure and you’ll need to try again. It may sound easy to take a particular card, unfortunately you aren’t able to communicate with other players. Well, mostly you cannot. There is one exception. 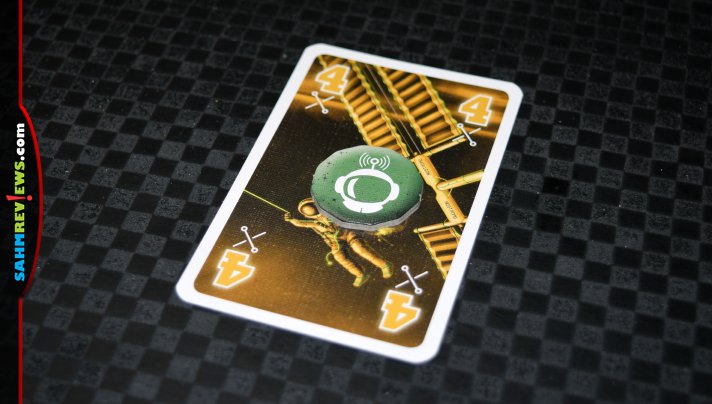 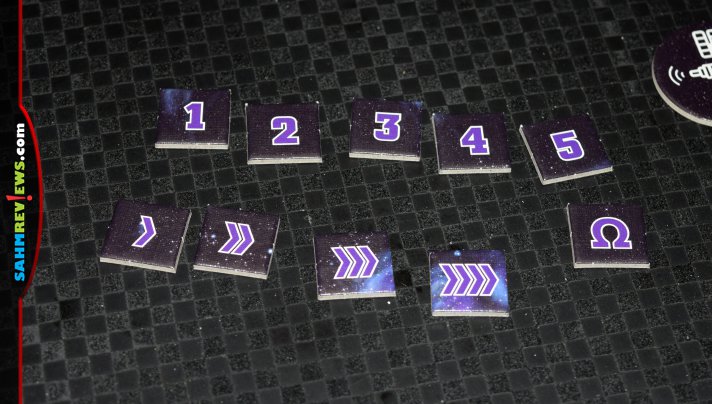 Sometimes the mission requires you to complete tasks in a certain order while other times you’ll simply need to achieve it. Once again, those requirements are listed in the logbook. The increasing difficulty and ongoing story line (without feeling like you’re committing to a long-term legacy game) are a couple of the reasons this game excels. It’s completely understandable why The Crew has been nominated for the coveted Kennerspiel des Jahres! For 3-5 players, The Crew offers a variety of mission options that vary in length and difficulty and is an easy transition for people who typically play games like Hearts and Spades. Currently available on Amazon or direct from Thames and Kosmos, this cooperative take on a traditional style of game is great for anyone who enjoys a good card game. Watch their Facebook and Twitter channels to see news about what other games are launching!

What was the first trick-taking game you learned to play?