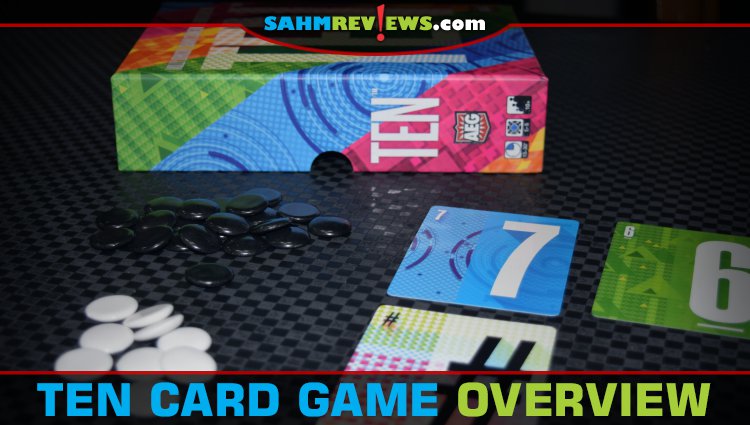 Like many of you, we consistently try to get friends and family to play games beyond the traditional classics. Pandemic and Ticket to Ride are two of our go-to titles. We’ve also had success with games like The Crew and No Thanks when looking for something a little quicker. AEG‘s Point Salad is another easy-to-teach card game we’ve tried, but the set collecting concept was a little too deep for our non-gaming family.

The same publisher and designers recently released their latest creation, Ten. From reading the box, Ten appears to be a bit lighter and features a more familiar theme that novice game players will recognize (numbers, instead of objects). The 129-card deck is made up of four colors (suits) and only the numbers one through nine. There are also several wild cards which are flexible in value, suit, or both. Lastly, some cards feature currency tokens. We’ll talk about these later.

The actual number of cards you will use is determined by the number of players, as is the distribution of values. For instance, in a 5-player game you will use all cards, while in a 3-player round you won’t have as many fours, fives, and sixes. There will also be one less wild. Ten supports 1-5 players, so be sure to consult the rulebook for the correct setup for your group.

The object of Ten is to construct long runs of numbers in each of the four colors. You earn cards by drawing from the deck “blackjack-style”, making sure not to exceed a total of ten. The active player will draw cards one at a time, keeping track of the overall total. Each number card adds to the total, while currency cards subtract from it.

Additionally, if you choose the number cards, you may also spend some of your currency (you begin the game with five) to buy any cards in the market. Extra cards may also be spent as one currency each and are an effective way to get rid of duplicates. Cards cost is equal to the number on the card. Remember, higher numbered cards cost more but are also rarer!

When drawing a wild card, play stops and a one-round auction occurs. In player order, all participants bid an amount to obtain the wild. The winner pays in tokens and/or cards and may save the wild card until the end of game. Once the auction is complete, the play picks back up with the active player continuing their turn.

If your total ever goes above ten, or the currency cards total more than ten, you bust. All number cards are moved to the market, and you gain a bust token from the supply. These are worth three currency and do not count towards your overall limit. If you bust with number cards, all other players will receive currency equal to the amount shown on the face-up cards. If currency is what caused you to bust, no one receives anything additional.

When the last card is drawn from the deck, the end of the game is signaled. The active player will finish their turn, then everyone gets one chance, in order, to purchase a card from the market. The game then proceeds to the final scoring. Players arrange their number cards and wild cards to create consecutive sequences in each of the four colors. Each person scores one point for every card in their longest sequences and an additional point if they submit a complete straight of one through nine. Total up the points from each color and the person with the highest overall total is the winner of Ten! Ties are broken by the person holding the most currency tokens.

Expect a full game of Ten to clock in at fifteen to thirty minutes. Because of the recognizable mechanics (blackjack & auction), Ten is quite easy to introduce to non-gamer players who are looking for something a little different than Spades or Bridge. You can find copies at your favorite local game store or direct from AEG on their website. Curious about what else Alderac or these designers are working on? Follow them on Facebook and Twitter to get the latest!

What is your go-to intro game for non-gamers?