It’s been almost five years since we started attending a weekly game night gathering we discovered on Meetup. It is held at a local chiropractic college every Friday night and has anywhere from a dozen to 50+ in attendance depending upon the weather. A little of everything gets played, from 15 minute card games like Happy Salmon or Hanamikoji, full Pathfinder or D&D sessions and even long and mind-taxing Euro-style board games such as Lorenzo il Magnifico or Mombasa. Everyone brings a bag full of games they like and it isn’t uncommon for over a hundred different titles to be present!

When we first began attending, probably somewhere around the second or third time, we were asked if we wanted to try a cooperative game with a couple that were regulars. We hadn’t played Pandemic before, but knew it was very popular. Unfortunately the game consisted of us sitting down, being assigned a character by the game’s owners and then having all of our turns dictated to us by them. No rules explanation, no option to make movement decisions on our own, no input at all. It was just “Scott, you should do this” and “Nicole, you should then do this”. We won the game, but had no fun doing so.

We didn’t let that experience sour us on Pandemic as we ended up purchasing our own copy and have taught it to many others (keeping our experience in mind, we offer zero input as to their ideal turn). In fact, we’ve become fans of the entire Pandemic line! Up until recently we would proudly exclaim that Pandemic: The Cure was our favorite of the series, followed closely (if not tied) with Pandemic Legacy: Season 1. It’s no exaggeration to say we’ve played every version of Pandemic ever issued, with the exception of one – Pandemic: Rising Tide. Our local store never got a copy or sold out too quickly, so lately we’ve been working through season 2 of the legacy line. Now there’s a new Pandemic available and I’m not kidding when I say Pandemic: Fall of Rome is the best one yet! 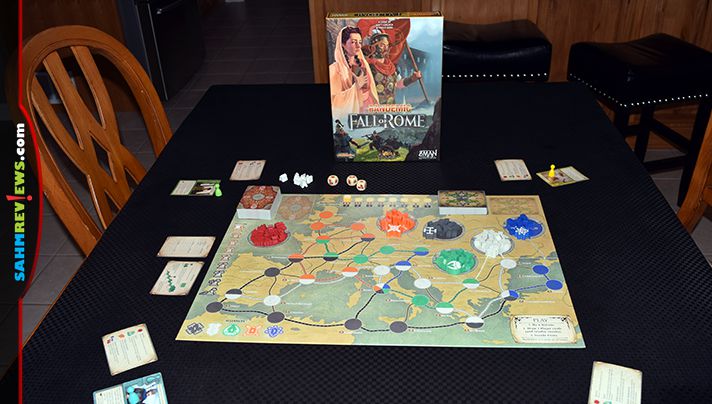 I’m going under the assumption that you’re probably familiar with the original game of Pandemic where you are working with other players trying to prevent the spread of four diseases through the world. You don’t have to completely eradicate them, just get them under control before you run out of cards (or other things that can happen to you). Pandemic: Fall of Rome uses many of these same mechanics, picks up a couple that fans of the legacy series will recognize and for good measure adds in some dice rolling!

Set in the 5th Century, you and up to four other players are members of the Roman Empire trying to prevent its inevitable fall. Barbarian tribes are breaching into the area and you want to either defeat or align yourselves with them to keep the Empire alive for all eternity. 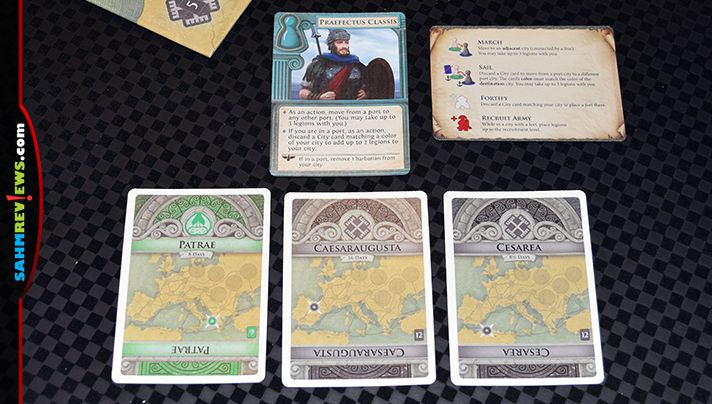 As in the original, in Pandemic: Fall of Rome you will set up the board with a deck of Invasion Cards (Infection cards in the original), a deck of Player Cards, an Invasion Rate Marker (Infection Rate), a Decline Marker (Outbreak Marker), Barbarian Cubes (Disease Cubes) and Player Pawns. In this version there are additionally Legion pawns, Forts and Alliance Tokens that will be utilized as necessary. Barbarian Tokens are placed in their matching starting areas and the adjacent cities, drawn randomly from the starting cards. All players receive a random role card denoting what special abilities they will possess for the game. Event cards are shuffled into the City Cards depending upon the number of players and Revolt Cards are mixed into the remaining Player Cards, which will set the game’s difficulty level (the more Revolt cards, the more difficult it will be to succeed). 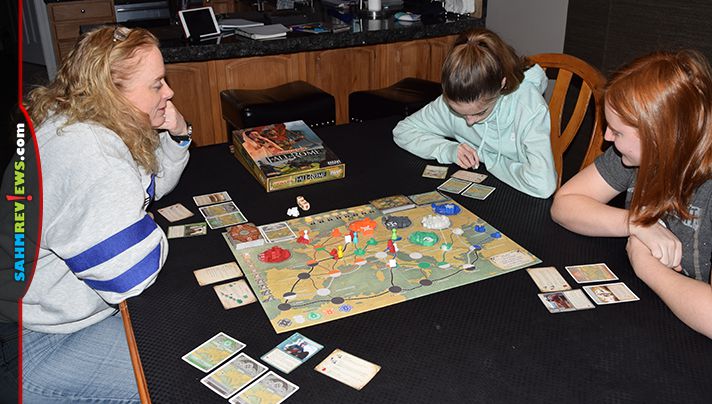 A player’s turn in Pandemic: Fall of Rome is very similar to the ones in Pandemic. On your turn you will take four actions in total from a list of eight. You may perform them in any order and may repeat them as needed. You can March your pawn to an adjacent city (connected by lines) and carry up to three Legions with you. You may also Sail to a port city from another port in the same manner, also with Legions along for the ride. You may decide to discard a City Card matching your current location to build a Fort there, protecting it from invasion. You can also Recruit Legions from the supply to the city you are currently in. 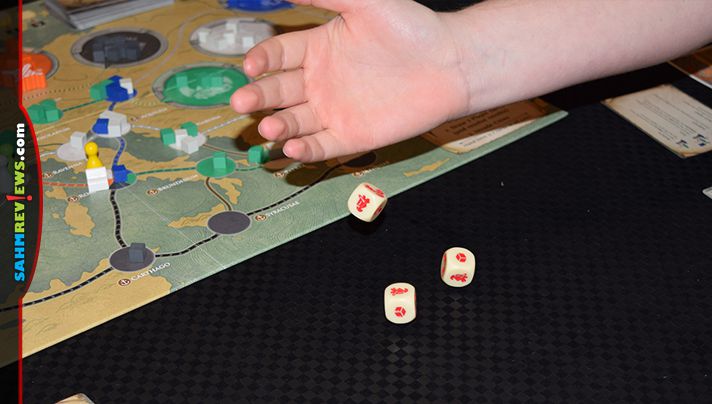 If you have moved into a city where there are also Barbarians, you may elect to do Battle. To do so, you will roll the included custom dice equal to the number of Legions with you (up to three) and resolve the battle based upon the result. Some faces will allow you to remove Barbarians, others hurt your Legion (or both!). One side’s result awards you with a special effect listed on your character card! 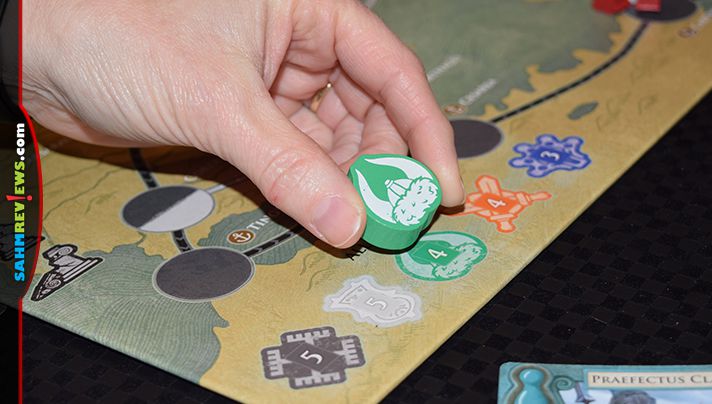 If you are in the same city as another player, you may trade cards if you or they have one that matches the location you are currently in. Ultimately you are trying to get enough of the same color card to one player so they may take the Forge Alliance action and bring peace between you and one of the tribes (similar to curing diseases in Pandemic). This opens up another action choice – Enlist Barbarians. Once you have an alliance you can take an action to discard a card matching the tribe’s color to remove all Barbarians of that color from your city and then replace them with up to that many Legions from the supply! 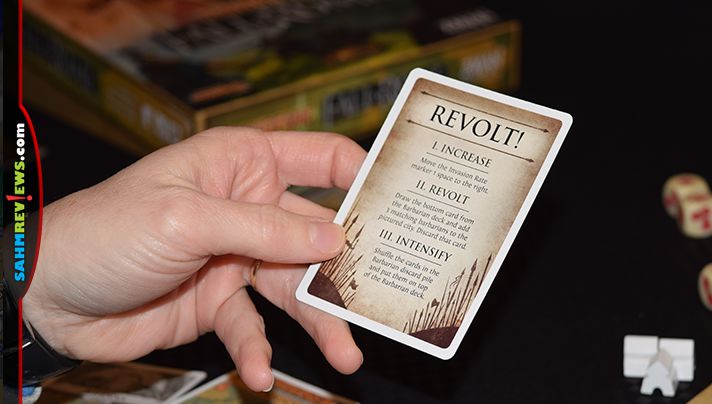 After your four actions, you will draw two Player Cards which will either be locations you add to your hand, events which you may resolve at any time or revolts (Epidemics) which causes additional Barbarians to be added to the board. This is where Pandemic: Fall of Rome really differs. Instead of just adding new Barbarians to the city whose card you draw, they populate along migration lines leading from their starting area directly to Rome. If you draw any city along that line and they haven’t progressed that far, you track back along the path and add them to the first city without any Barbarians. It is a constant influx along these lines you must manage and it is much easier to visualize the areas in which you need to concentrate. Easier to visualize, but not necessarily easier to accomplish! 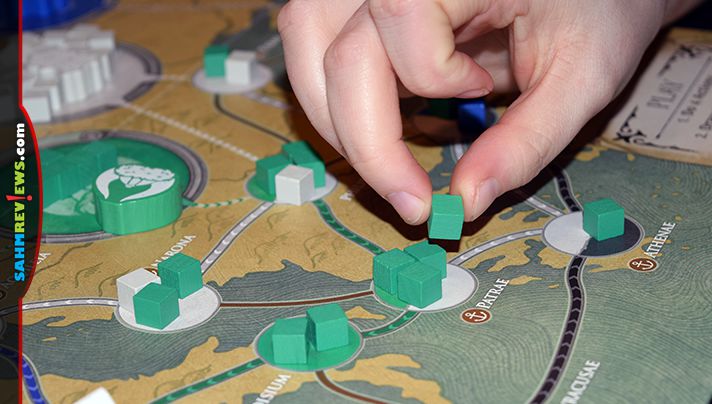 Of course if a city is required to accept a fourth Barbarian, it is “sacked” (Outbreaks) and additional Barbarians spread to neighboring cities in the same manner as the original game. Legions provide buffers against the Barbarians and are removed 1:1 for any that would be placed in a city as long as there is either a player there (to lead the Legion) or a Fort built. Lone Legions do nothing to protect you. Each time a city is sacked, the Decline Marker is moved down one on the track, signifying that you are getting closer to losing the Empire. 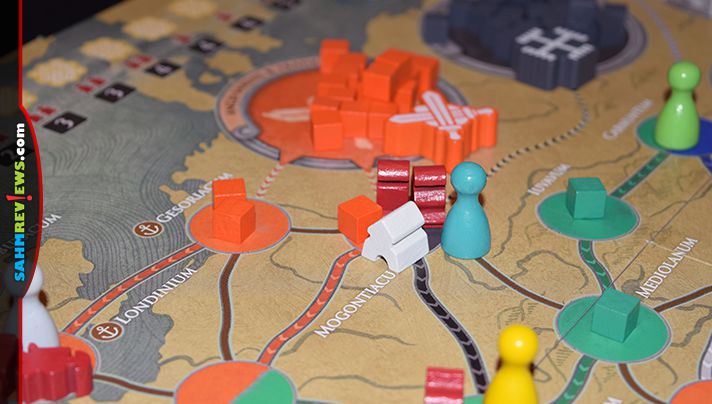 The team immediately wins if all five Barbarian tribes no longer threaten the Roman Empire either by having formed an alliance or there being no Barbarians of that tribe in any cities on the board. As you might expect, you can lose in a number of ways. If there are so many Barbarians on the board that you cannot add another when required to, when you cannot draw two Player Cards at the end of your turn, The Decline Marker reached the last space on the track or the city of Roma is sacked.

Even though I would consider us very experienced in all things Pandemic, this version has proven a bit more difficult to win than the others – and we love that! Each time we have lost we have been within a turn or two of being victorious. Just close enough to taste and make you beg for another round!

This is one you definitely want in your collection even if you’re just a mild fan of the original. You’ll find copies on Amazon or at your local game store for under $50. We can’t stress enough – this is the best version of Pandemic to date! If you’re diehard fans like we are, you’ll want to check out Z-Man Games’ website and follow them on Twitter and Facebook to be the first to know about any future games in the Pandemic series! I know we’ll be first in line!

How many of the Pandemic games have you played?