If there’s something this world needs, it is more games and more sushi. Sometimes being in the middle of the Midwest it can be difficult to get either. We’ve always focused on good games here on SahmReviews and have made a point to search out good sushi whenever we can. We’ve played games that require you to use chopsticks (Chop Stix, Chopstick Dexterity), helped readers to make their own sushi at home and even shown how you can host your own Japanese-themed party by featuring both games and food with an Asian flavor.

We’re always on the lookout for new games to add to our lists and recently came across Maki Stack by Blue Orange Games that seemed to be a natural fit. It’s a dexterity game for two, four or six players where you are trying to stack pieces of sushi (and accessories) on top of each other! 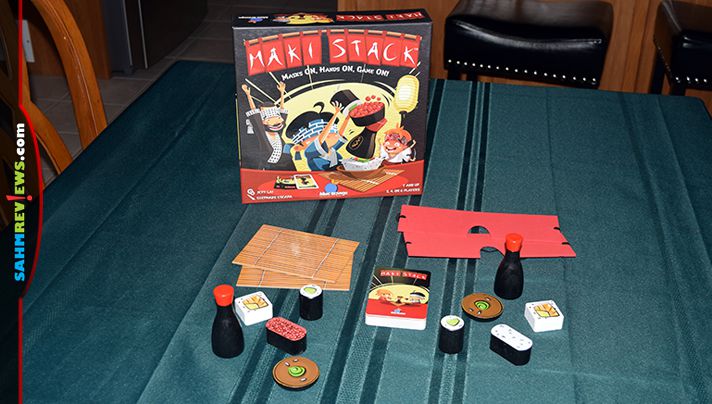 Released late last year, Maki Stack features high-quality wooden components similar to what you’re used to seeing from Blue Orange in some of their other titles like Maask and Pengoloo. Inside the box you’ll find ten of these wooden objects (sushi, plates and soy sauce bottles) along with 40 Challenge Cards, two sushi mats and 2 masks. Wait, masks? What do masks have to do with making sushi? Keep reading…

Maki Stack is best played with exactly four players who form two teams of two. Each team receives a mask, a sushi mat and a set of five wooden objects (one plate, one soy sauce bottle and three pieces of sushi. The stack of forty Challenge Cards are shuffled and set in the center of the play area, forming a draw pile. That’s all you’ll need to do to set up the game – you’re now ready to play!

There are two types of Challenge Cards, and depending upon which you draw, will determine how the teams play the round. The backs of the cards depict the challenge type and is prepared for before revealing the card’s face. You’ll either be playing in “Mask Mode”, where one player wears the blindfold while the other describes what they see on the card’s face. Or you’ll have to enter “Chopstick Mode”, which challenges both players to use only one finger to pick up and move the pieces in tandem. 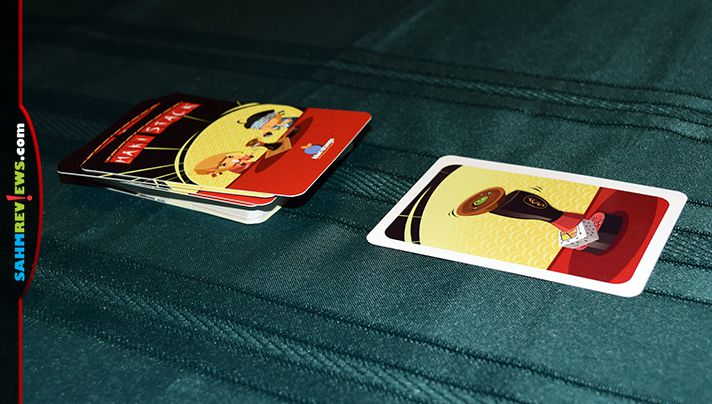 On the face of the revealed cards is a depiction of the five objects you have in a specific configuration, usually a vertical stack. If in Mask Mode, one person will try their best to describe the stack, the pieces and their order and orientation to the blindfolded team member who must build this stack. The first team to successfully do so wins the card. 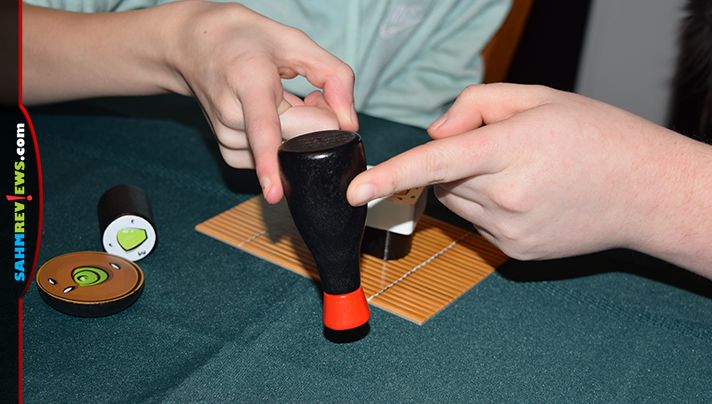 If playing a round of Maki Stack in Chopstick Mode, even though both players can clearly see the card and the stack requirements, each person can only use their index finger (or pinky finger for a harder game) to pick up, move and place each object onto the stack. They must do so together and hopefully without dropping the piece, or even worse, knocking over their growing stack. The first team to also complete this task wins the card. The first team to win a total of six cards wins the game of Maki Stack!

It doesn’t matter if your family enjoys sushi or not, Maki Stack is a unique and challenging stacking game. Not only do the odd-sized pieces make things trying, the addition of a blindfold or having to work with a teammate to move a piece is an exercise in communication and teamwork. Tools people of any age should practice!

Maki Stack is extremely affordable on Amazon or at your local game store, especially considering the quality of the components, and is appropriate for nearly any age!. Find out what else Blue Orange Games is cooking up by checking out their website or following them on Facebook and Twitter!

What is your favorite food-themed game?