I have a confession to make. We have a non-traditional Christmas Eve tradition. Well, not normal for anyone I know at least!

It all started when we lived in Los Angeles. Anyone who has moved away from family for a job, college, marriage or whatever reason might be able to relate. If you have always called the same place home, maybe you’ll get to see the holidays through a new set of eyes.

Moving was difficult, but we did it for the job opportunity. Southern California was a long way from Iowa, but it brought with it a lot of perks including beautiful weather and lots of things to do year-round. We thought that our family and friends would be clamoring for our guest room in an effort to get out of the bitter winter chills of the Midwest. That couldn’t have been further from the truth. Ultimately we found ourselves far away from family during the holidays and alone. We decided to start our own tradition, attend Christmas Eve mass then go out to dinner.

Know what? Not many restaurants are open on Christmas Eve. We discovered that Asian restaurants were the exception and by default, that became our tradition. Now we are adding a new layer to it by incorporating game night into our Christmas Eve plans. What better way than to keep the theme going with a game centered around chopsticks: Chopstick Dexterity! 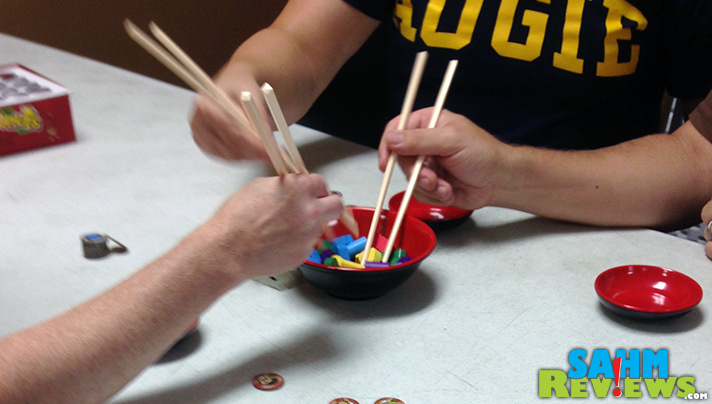 Let me start by saying that dexterity games are not my strong suit. Actually, anyone my age or older may be able to claim the same. It takes a steady hand and good eye/hand coordination for most. More often than not, the younger players claim the win. Chopstick Dexterity by Mayday Games is different in that age, wisdom and experience give adults the upper hand! 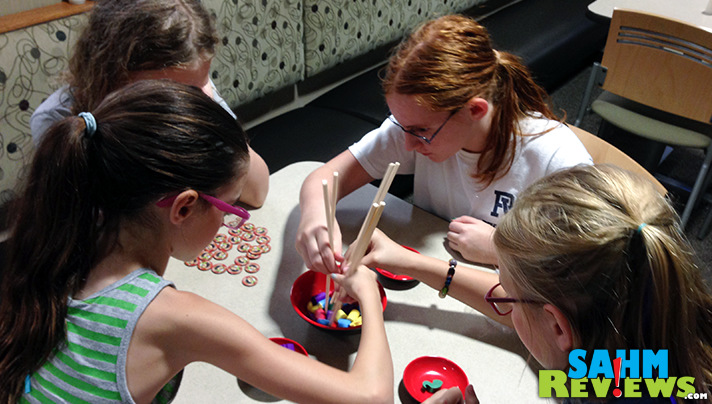 I’ve been practicing for this game since I was about 8 years old when I won a set of chopsticks in a contest through our local newspaper. Am I competitive in general? Yes. When I play Chopsticks Dexterity, you can multiply that aggression by 100.

The basis of the game is simple. The game consists of the previously mentioned chopsticks, five colors each of Shrimp, Tentacle, Nigiri, Onigiri and Sushi Roll, a large community bowl, individual player bowls and game tokens featuring the various types of sushi. Over the course of multiple rounds, compete to win tokens the person who has the most at the end wins. 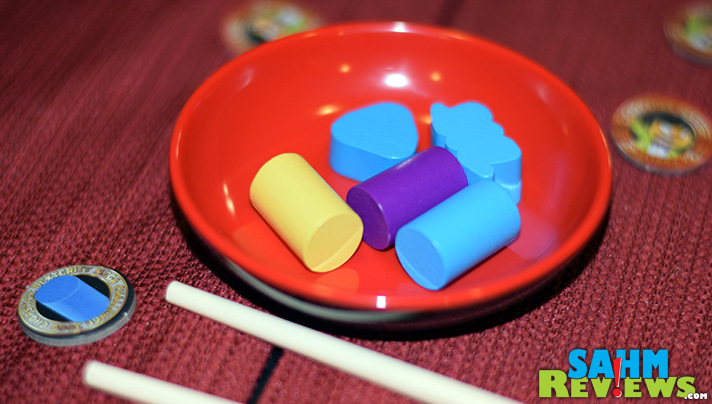 So how do you get your hands on those tokens? By being really good at picking up stuff with chopsticks, of course! Each token shows a picture of one of the items in the community bowl. Each round, one of the tokens is flipped over then everyone simultaneously fishes the matching items from the bowl. If a piece of blue nigiri is shown on the chip, all nigiri as well as all blue items are valid. When everything that matches has been claimed by one of the players, the round is over. Everyone counts what they have collected in their personal bowls and the one with the most gets the token. 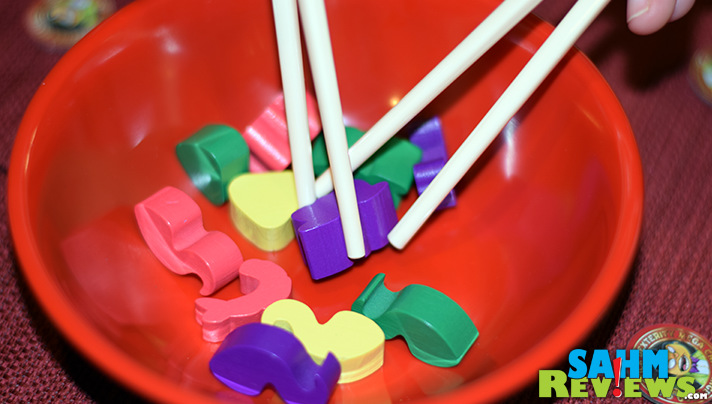 Sounds easy, doesn’t it? It’s not. While you’re trying to pick up an odd-shaped, wooden piece from the crowded bowl, your opponents are doing the same. It’s cramped quarters. Using chopsticks can be challenging enough but add on an element of chopstick ninja work and it’s even harder.

Now do that same task several more times until all the tokens are gone. You realize just how good (or not) you are at holding and maneuvering a set of chopsticks. We’ve played it several times with both kids and adults and it’s always a winner. Everyone walks away energized and hungry for sushi!

This isn’t your traditional board game, but our holiday traditions aren’t normal anyhow. Grab some sushi or Chinese takeout, gather the family and enjoy some quality time. Traditions start somewhere and we’re good at starting our own.