(Editor’s Note: This year, GG would have turned 100 years old. I thought as a tribute I would retell our story of how her passing has helped us create a new family tradition. We still think of her often and know she is looking down upon us with her angel friends.)

First, I want to say thank you to everyone who inquired about my well-being during my blogging absence. I chose not to blog for the past few months because I was experiencing a time in my life where I wasn’t able to express my thoughts in a positive manner. Rather than have my blog become an outlet for negative energy, I opted to maintain a private paper journal. But things are on the mend and I want to share a story.

Several months ago, DH attended the funeral of his grandmother. It was in a different part of the country and he had other family business to attend to at the same time. Sadly, we opted for him to go alone while I stayed home with the girls. While at the visitation, he removed the girls’ school pictures from his wallet and sent them on with his grandmother.

Last weekend, at the seasoned age of 93, my grandmother “GG” passed away. I’m proud to say that she was a wonderful woman that lived independently until her last day. My daughters loved her and DH often suggested we pick up fast food and swing by to see her. She always welcomed us and we always enjoyed seeing her. A feisty little Italian, she was fun to spend time with. 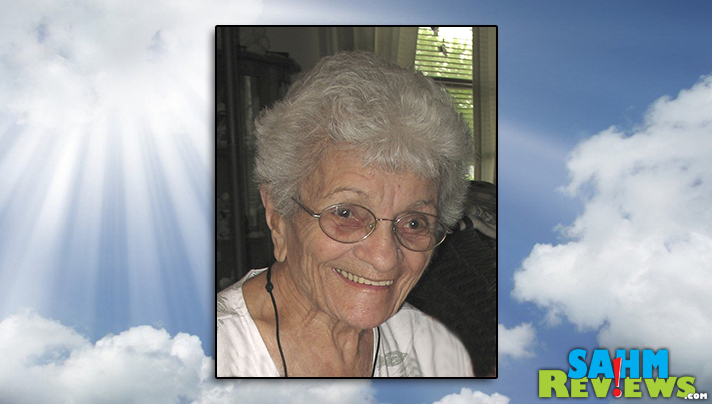 She was fun to tease, too. When she would have trouble sleeping, I would suggest that a little whiskey would help her sleep. She always laughed; taking it as it was intended, as a joke. One day when I took her to a doctor’s appointment, I suggested that we hit a club on the way home and she joked that she may find herself a young guy. When she said she wasn’t feeling well or was hospitalized for any reason, I always asked if she had run out of chocolate – which often was the case. On more than one of her hospital visits, I smuggled in chocolate and told the nurses that it was her medicine and she needed it. We both agreed that chocolate was what helped her make it to 93. (This picture was taken of her just this past May.)

Although skeptical, we took the girls to the visitation and the funeral. We prepared them ahead of time as much we could, explaining that we first were going to someplace to be sad with other people who were sad that she passed away. Then the next day we would attend church to say goodbye for the last time. We answered any question as best we could.

At the visitation, we kept them at a distance until they asked to go closer to see her. Surprisingly, they weren’t scared or freaked out. They were sad and wanted to touch her. Miss K was very curious, continually asking questions about the whole thing. Miss M was just sad that she wasn’t coming back.

At one point, DH and Miss K were alone at GG’s side. DH removed Miss K’s picture from his wallet and let her place it in with GG. He got Miss M and allowed her to do the same thing. Both girls were proud to give GG their pictures.

Shortly thereafter, one of my aunts gave Miss K a few photos of their family and her grandson helped Miss K add their pictures to the ones of my girls. After that, a couple of my tween cousins got their school photos, wrote goodbye notes on the back and added them to the collection. By the time visitation was over, there was a photo of almost every great-grandchild…ensuring that GG wouldn’t be alone on her next journey.

Although it was a sad time for our family, this small ritual seemed to give the children a connection and closure they might not otherwise have had. What started off as a simple gesture by DH at his own grandmother’s funeral will become a tradition in our immediate family.