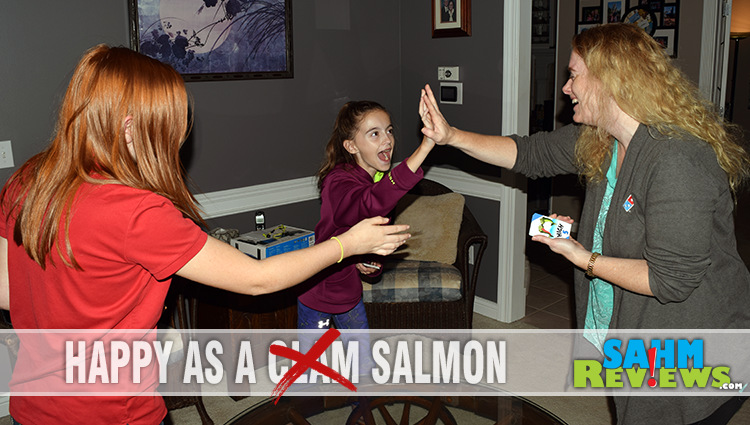 I’ll be the first to admit that I’m not the fun parent. I don’t joke around as much as I could or should and am usually the one who says “No” to ice cream for dinner. April Fool’s Day jokes are seldom initiated by me. No amount of liquid courage will get me to sing karaoke and you will not likely see me volunteering to embarrass myself on a dance floor unless I have an entourage of others doing the same alongside me. There are exceptions, however. I don’t mind speaking at blogging events because I know they are people just like me and get that I may make mistakes. At Beaches in Turks and Caicos last year, I was ever so delighted to join the conga line as demonstrated by the fact I was one of the first to hop up to participate. I even went on stage to embarrass myself in front of the crowd in a dancing contest. I’m generally not a huge fan of party activities that put any kind of spotlight on me, but there are definitely exceptions.

As you (hopefully) recall, last week I put together details on how to host a sushi-themed party. I included tips on how to save money and make sushi at home then compiled a list of games that would be perfect for the occasion. Among them I mentioned Happy Salmon by North Star Games. This is one of those exceptions.

A few times recently we’ve brought it to game gatherings and would explain the rules: be the first to get rid of your cards by doing the actions on each card. Sounds like a bit of a nuisance doesn’t it? Nobody around here was familiar with it so getting people to play has consistently proven difficult. Until, of course, they actually played it then others were more than happy to jump in as well. Each game lasts only a few minutes and the rules can’t get much easier than this.

In Happy Salmon, each player has a deck of 12 randomly shuffled cards with actions such as Pound it! High 5, Switcheroo and Happy Salmon. Best played standing at a round table, it can accommodate up to 6 people, more if you buy two sets. When play begins, each player attempts to match with another participant by completing the action at the same time. If a player gets stuck, move it to the bottom of the deck and try the next. Pound it is a fist bump. High 5 is just as it sounds, a high 5. Switcharoo means the players switch places (or if mobility is an issue, switch cards). Happy Salmon is a special arm (or fin) flap between players. All of this taking place simultaneously as everyone attempts to rid their deck of cards. You know what? It will make more sense if you just watch the contagiously fun chaos.

It sounds like someone brought a flock of birds to the party, doesn’t it? Kind of fitting since we’re all a bunch of salmon!

I’ve played Happy Salmon multiple time at conferences, conventions and game nights and have yet to be disappointed. It’s easy to play, VERY interactive and well worth the small price tag of about $13. You’ll definitely be seeing this in our upcoming holiday gift guide! Find out what else is swimming upstream at North Star Games by visiting them on Facebook and Twitter.

Are you game for something this interactive and noisy? (Hint: Say yes!)