We’re always on the lookout for games that support more than the traditional four players. We get it, designing a game for a larger group is difficult unless all you’re doing is copying the Cards Against Humanity (Apple to Apples) game. There’s a careful balance between making sure people don’t get bored with down time between turns and making sure it is appealing to all ages.

Dexterity (action games) like Happy Salmon are amazing for parties, but let’s be honest – not everyone is expressive or unreserved enough to jump up and down at a table while shouting out the card they are looking for. Another great one for large groups is Codenames. But that too suffers when players of different experience levels or ages try to compete with one another.

We’ve found one that fits both criteria of being accessible to almost all ages while supporting up to eight players. Most Wanted by North Star Games (yes, the same people behind the super-noisy Happy Salmon) made its retail debut in the second half of last year and has been a mainstay on our game table ever since! There are no lack of games based upon the game of poker. Each one tries to do things a little differently, with varying success. Most Wanted uses poker as its base, but this game is not poker-like at all! 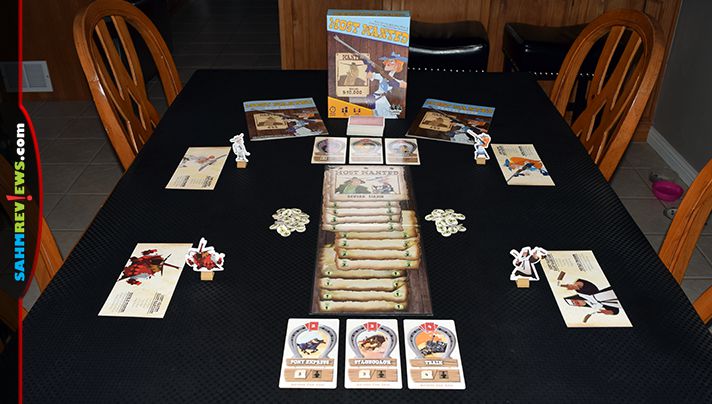 In Most Wanted, you and up to seven other players are in St. Louis, the Gateway to the (Wild) West and are vying to become known as the most notorious wrongdoer in the land. Committing robberies is your method of madness, and only the one who plays the best hand will run out with the loot. The rest are forced to spend the night in jail and make bail. 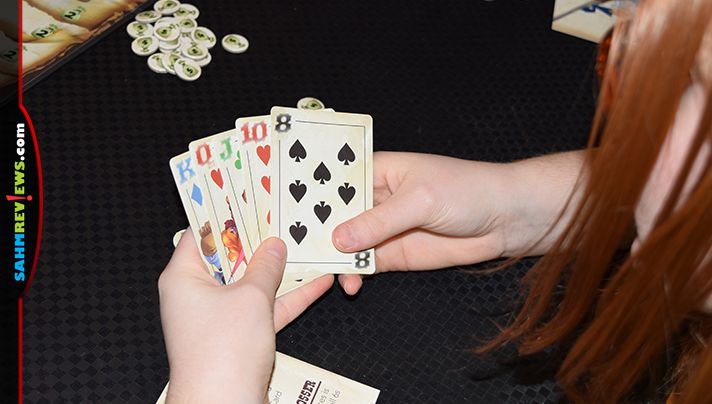 Most Wanted uses two decks of custom-designed playing cards and are numbered the same as a standard Hoyle deck (if you removed all the 2’s, 3’s, 4’s and 5’s). These are shuffled together and five cards are dealt to each player, forming their starting hands. The score board is laid out in the center of the play area while the six action cards are also set face-up next to the board. All players choose a 3-D character pawn and matching player aid and keep it in front of them. 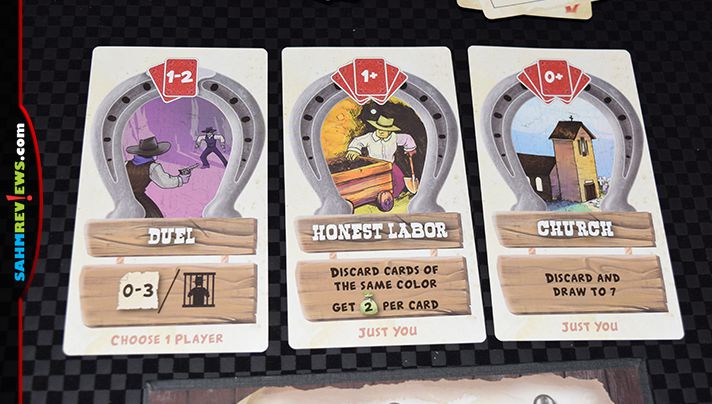 On your turn you will select from one of the available actions listed on the action cards. Three of these are general actions which allow you to discard cards from your hand and draw back up to seven cards, discard cards of the same color (suit) and receive two bags of money for each card played or even challenge another player to a duel! Duels are 1 vs 1 battles where one person plays one or two cards and the other player does the same. High card (or hand) wins!

The other three actions involve committing a robbery of either the Pony Express, a random stagecoach or a passing train. At the top of the robbery action card is a number which states how many cards you must play as a poker hand (2, 3 or 4). Choose the appropriate number of cards from your hand and lay them face down in front of you. All other players may then choose to participate in the robbery, also playing hands of the same number of cards. 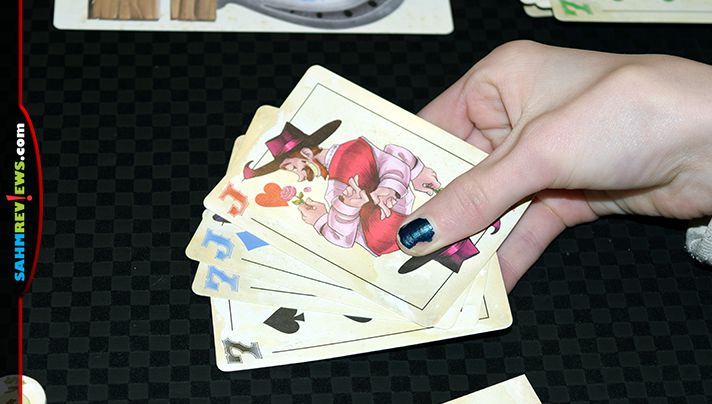 The outlaw with the highest poker hand completes the robbery successfully and wins the number of points shown at the bottom of the action card (again, 2, 3, or 4) and moves their pawn that many spaces on the score board. The other players are arrested and must immediately pay bail. If they weren’t on the board yet, they pay nothing! Otherwise they’ll pay a number of money bags equal to the listed number on the score board. If they cannot, they lose a point for each bag they’re short! 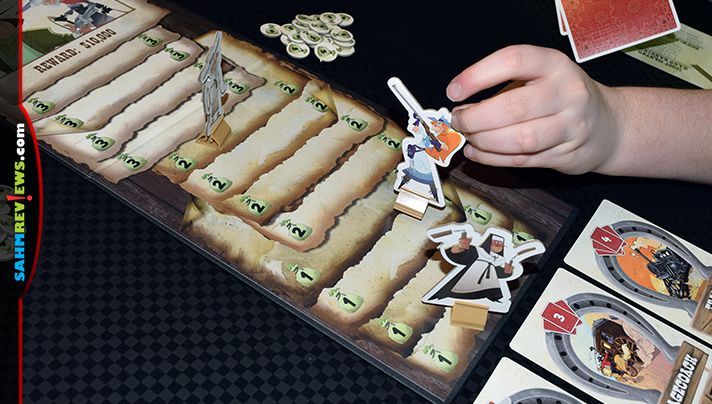 Every time the draw deck is depleted, one of the robbery action cards are flipped over, making it worth more points. Once someone reaches the Most Wanted space on the score board, the game is over immediately and that player is the winner! 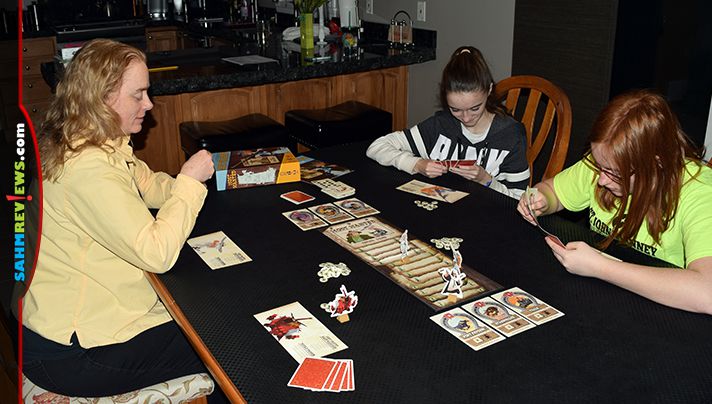 If that doesn’t sound interesting enough, Most Wanted turns things up a little by adding in a Travel Guide. St. Louis was just the starting point in most adventurer’s itinerary. The travel guide includes two journeys to follow, one to Las Vegas and the other along the Santa Fe Trail. You’ll play a game in each city along the way, each time adding one or more new action cards to the field. You can Holdup another player, Visit a Tent Saloon or even Rob a Grave or a Bank! This type of variable setup means no two games of Most Wanted need to play the same!

You don’t have to travel to St. Louis to find your copy of Most Wanted. Check the shelves of your favorite local game store or pick up one of the remaining copies on Amazon. Take a journey over to North Star Games’ website where you’ll find details on how to win one of over 1,000 copies of Evolution they’re giving away to celebrate the digital release of the same game. If you’re reading this too late, make sure you follow them on Facebook and Twitter so you don’t miss their next promotion!

When’s the last time you had poker night?