The great thing about having a regular game night each week is that there is no lack of willing participants when we need to fill out the player count of a game. When the kids aren’t around and it is just Nicole and I, we don’t like playing games designed for four or five as the experience just isn’t the same. Having a group of friends who are willing to play almost anything helps us fill the void while the girls are at practice, spending the night at a friend’s house or just catching up on a Netflix series at home.

Sometimes we have the opposite problem – six or seven players and games that only play four! In those situations we will usually break up into two games so everyone gets a chance to play something. Other times we’ll search out a game that plays a larger number of players. Happy Salmon, One Night Ultimate Werewolf and Deception: Murder in Hong Kong are our current go-tos, but our pool of titles that support more than four just got larger with the addition of Goodcritters by Arcane Wonders to our collection. 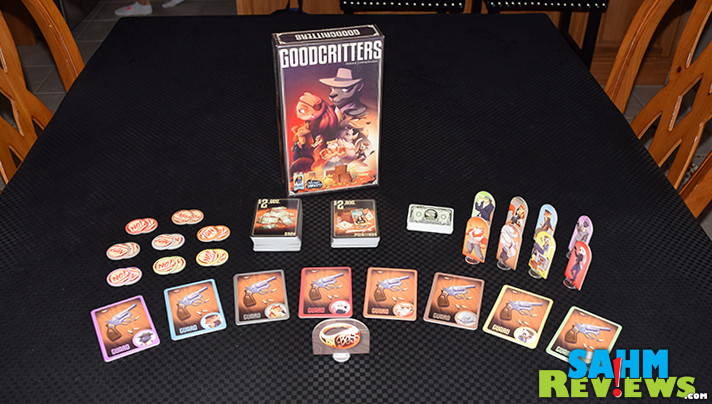 I have a love-hate relationship with games that have an “I divide, you choose” mechanic. This is probably because I always ended up with the half of the cookie with the fewest chocolate chips when I was a child. However, I love the tension that choice provides and that’s why games like Hanamikoji, Legend of the Cherry Tree and New York Slice can regularly be found in our game night bag. Now we have another!

In Goodcritters, up to eight players take on the roles of an anthropomorphic animals who happen to be part of a 1920’s-style gang. The big heist has already taken place and it is now time to split up the proceeds. Not everyone will agree on how it is split and can decide to cast their vote to replace the boss, skim a little off the top or even rob another fellow gang member!

Everyone receives a matching standee and set of five Action Cards for their character as well as one of each value of Loot Card. The rest of the deck of 140 Loot Cards are shuffled and divided into stacks as dictated by the number of players. The Fuzz! Card is inserted into one of the stacks (check the rules for placement, also determined by the number of players) and all of the small piles are combined into one large draw deck. Lastly, the owner of the game receives the Boss Ring standee and becomes the first Boss.

Goodcritters is played over a number of rounds until The Fuzz! card is revealed. At the beginning of each round a number of cards equal to the number of players plus two are turned over from the draw deck. The Boss decides how to spread the loot around, arranging the cards in front of each player. Once set, everyone votes on whether or not to accept the distribution and whether or not that person should remain the group’s boss. 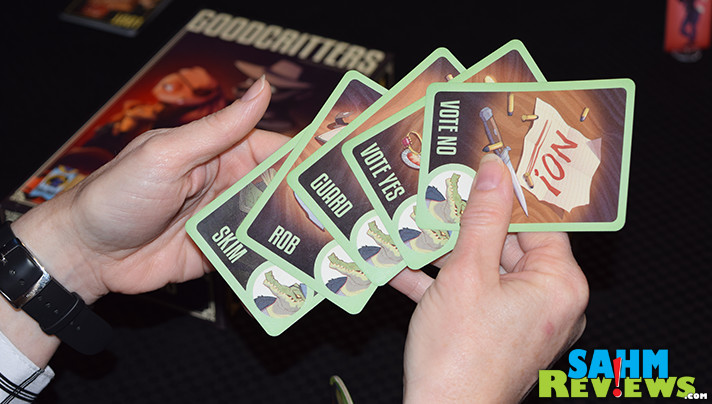 Secretly, all players will choose one of the five Action Cards from their hand. A “Vote Yes” and a “Vote No” do just that – cast a vote in favor or in opposition of the current distribution. But it’s not as simple as that. Other cards give each player different options. The “Skim” card allows that player to take the top card from the Loot Deck and add it to their Stash. Only the first to play one gets to skim – any subsequent attempts will fail. You may try to rob another player by playing the “Rob” card, but it is only successful if you also threaten that person by placing your Threat Marker (your standee) in front of that character. 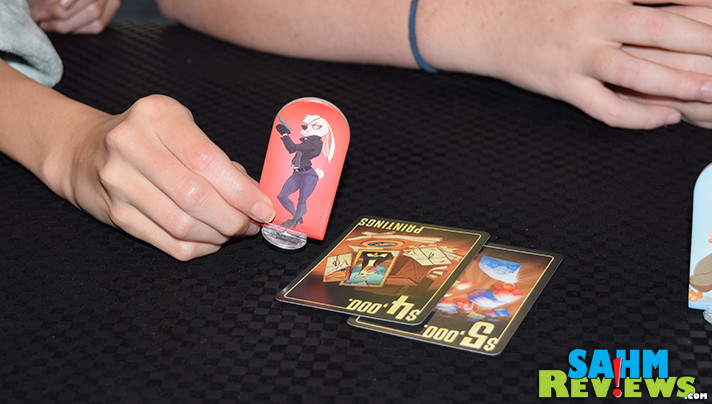 Threats occurs during the Choose Action stage while players make deals and issue ultimatums while deciding on which card to play. Fortunately, if you think you’re about to be robbed, there is a “Guard” card to play which will not only protect your Stash, it will allow you to steal one random Loot Card from the robber’s Stash!. 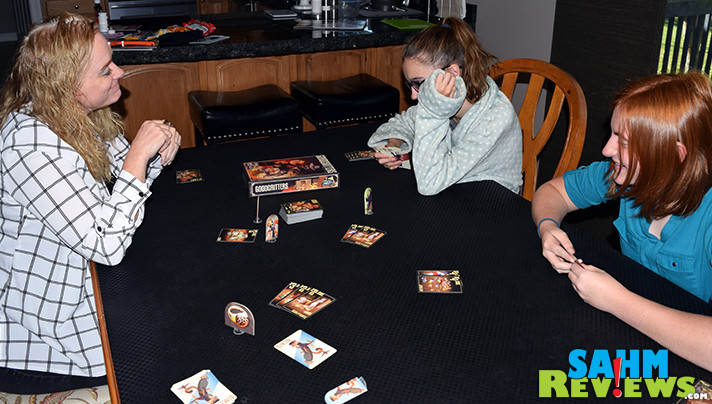 Starting with the Boss and going clockwise around the table, each gangster reveals their chosen card and carries out the action shown. Once all are exposed, the final vote tally is determined. If there are more “Vote Yes” cards than “Vote No”, then the distribution is agreed upon and the Boss remains in their position. If the “Vote No” is in the majority, the Loot Cards are collected, two additional drawn and added to the pile and the Boss Ring passed to the first person in clockwise order who voted against. Now that person must begin the round again by dividing up the spoils and calling for a vote of confidence! If the vote is tied, then the goods are distributed, but the Boss responsibilities are passed for the next round.

At some point when dealing out new cards for the subsequent round or skimming off the top, The Fuzz! (card) will show up! This ends the game immediately and any loot on the table is confiscated by the authorities. Everyone totals up their ill-gotten gains and the player with the most valuable Stash is the winner of Goodcritters!

Optional included rules allow for Payoffs and Bribes, but we found that the base game was very enjoyable and easier to teach to new players, so we save these optional rules for when we’re competing with friends who have already played a few times. At under $25 on Amazon, we found great value in Goodcritters and think it’s a perfect filler game for when you have more than four players waiting on a game!

You don’t have to wait for the boss to give you your share. You can win a copy of Goodcritters for yourself by entering the contest below! Stop back by the hideout every day for more chances of grabbing the loot!