I have a confession to make. What we’ve been telling you isn’t entirely the truth. Well, it is. Kind of. But there’s more to the story and I need to get it off my chest.

Scott and I often talk about our weekly board game meet-up at the local college. We go every week unless we’re at an all-inclusive resort or have some activity for the kids. We gloat about how our kids love us so much and enjoy playing board games with us until the late hours of a Friday evening. That’s where things aren’t quite as cut and dry.

They do enjoy playing games with us and regularly sit down with the group to kick our butts at some cool strategy games. What I failed to admit is that there is one game that will tear them away from us in a split second: Ultimate Werewolf from Bezier Games.

The minute they see the werewolf group gathering, they’re gone. History. Mom who? We don’t see them until we’re ready to leave at 10:30 or 11pm when we let them know it’s the last game for them for the evening.

You know what? I’m happy about it. They have discovered that they can have fun playing games without us with an ever-changing landscape of other individuals. It’s truly a social game!  I decided to capitalize on Scott’s current kick of “big game in a small package” theme and tell you all about this pied-piper of a game.

It’s an extremely simple card game that can accommodate anywhere from 5 people to 30 or 6 people to 75 depending on whether you have the ultimate revised or deluxe edition. Everyone is given a random card from the deck of roles including villagers and werewolves along with special characters such as a seer, witch, robber, village idiot, drunk, spellcaster or old hag. The goal of the game is to kill the werewolves before they kill all the villagers. Communication takes place through a moderator as he tells the players to open and close their eyes at certain points in the game. During the silent portion of the game, thumbs up and pointing occur between players. Each round at night the werewolves get to eat someone. 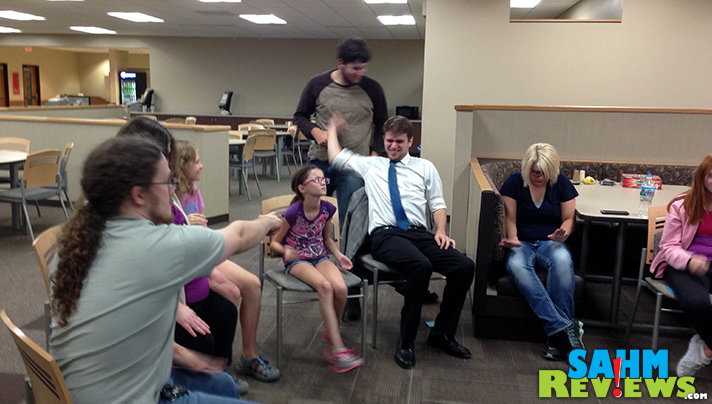 During the day, everyone votes to hang someone they believe to be a werewolf. Before a vote happens, players plead their case as to why someone should be put to death then that individual is allowed to rationalize why it should be someone else and not them. During voting, thumbs up means someone lives and thumbs down means they die. Each round players evaluate what people said, who they voted for and whether someone is being truthful. The game sounds morbid but honestly it isn’t. It’s a social deduction game relying on skills of deception and persuasion as players secretly swap roles with someone else, try to convince the others that they aren’t a werewolf and why someone they know is an innocent should be convicted. 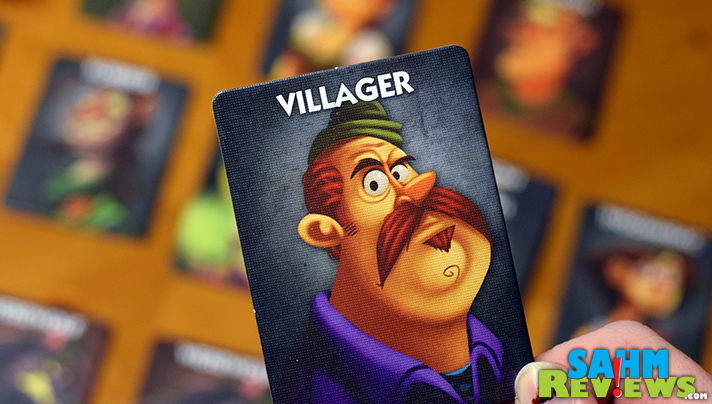 The only pitfall is that it can last several rounds depending on how many people are playing and how they play out their roles. That’s where One Night Ultimate Werewolf comes in. With the same base game, the roles are slightly different, accommodates up to 10 players and lasts about 10 minutes. Players need to work quickly because they only have one night to solve the mystery of who the werewolves are. This quick turnaround time gives players the ability to play multiple times allowing a lot of diversity as they will probably have a new role when the next game starts.

One Night Ultimate Werewolf Daybreak removes the villagers and moderator while introducing artifacts as a new component. While we have played these as a family, they don’t have the same feel as with a larger group so plan to gather up some friends when you are ready to play! Whether you are looking for a long game or a short one, the Ultimate Werewolf series has you covered.

Prefer vampires over werewolves? Tune into Bezier Games’ Facebook and Twitter pages for updates on the release of their next iteration of this game: One Night Ultimate Vampire scheduled for January 2016! Looking for something a little more suburban? Then check out Suburbia. Stay tuned as we will be sharing another Bezier Games favorite, Castles of Mad King Ludwig!

Would you let your kids run off to be “attacked” by werewolves?