You may recall that I’ve mentioned many times that one of my favorite games to play as a kid was War. It was easy to grab a deck of standard playing cards and battle against an opponent for winner-take-all. But let’s face it, there was zero strategy in the game. Your destiny was determined solely by the shuffle of the cards.

And if you’re a regular SahmReviews reader, you’ll also remember that we love pirates! For the most part it is a family-friendly theme and the games are not overpriced due to a high-budget movie license. Continuing on the big-game-in-a-little-box kick I’m on, Captain’s Wager from Grey Fox Games scratches both of those itches: elements of the game “War” and pirate themed! 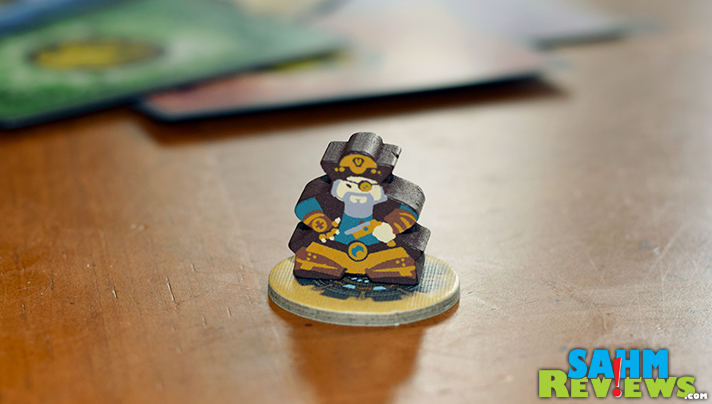 In Captain’s Wager, you are one of up to five pirate Captains who are sending their crews on adventures searching for treasure on airships. Yes, these aren’t your typical seaborne scallywags but flying buccaneers raiding floating cities above the clouds! However, their goal is still the same – collect as much treasure as humanly possible. 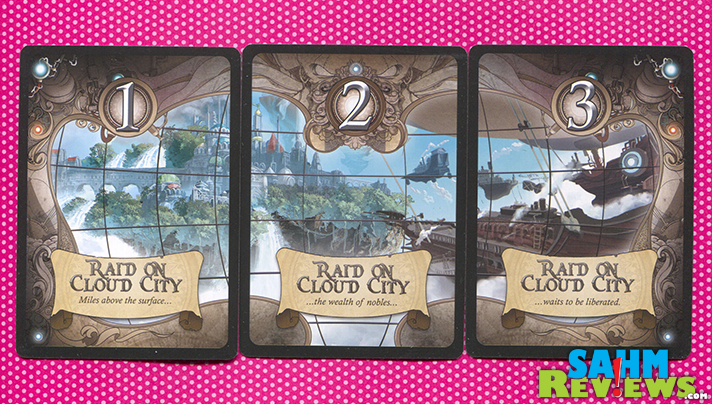 Rounds are called “Encounters” and are represented by beautifully-drawn scenarios spanning across three standard sized playing cards. These three cards are each part of the encounter, with the Captain winning the most receiving the treasures. 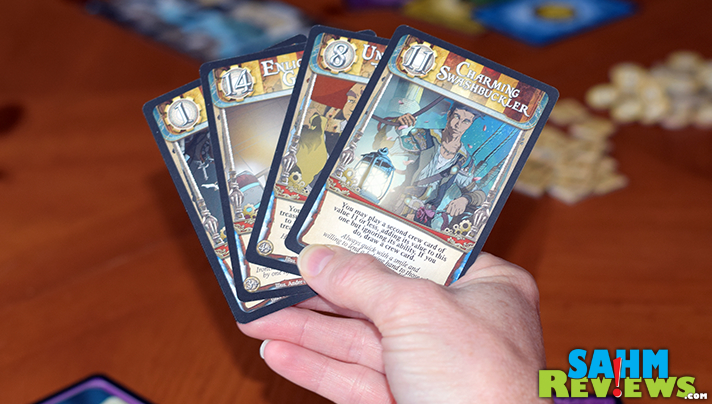 Every player is dealt a hand of four crew cards (you are hiring your crew from the local tavern) and begins with their own Treasure Deck containing like-valued treasures to wage with. At the beginning of each encounter phase, all Captains wager a treasure from the top of their deck, face down. This is your ante for the round.

Then in turn all Captains must choose from one of three possible actions. They can increase their bet on their crew by adding another face-down treasure card from their deck into the pool and then playing a face-up crew card in front of them, resolving any effects printed on the face. Each crew card has a number in the upper left corner signifying the strength of that character. Ultimately at the end of the phase the strongest crew member will win the encounter card.

You might also choose to “Borrow” instead of “Bet” if you are unsure about your ability to win the round. By borrowing, you take a loan token from the bank (-2 gold at the end of the game) and play your crew card. This prevents you from having to play an additional treasure card that another person might win!

Lastly, you can choose to “Steal” (because that’s what pirates do)!  To steal you lay all of your crew cards down (face down) and collect two gold from the bank (three if you’re the first to steal in this encounter) AND put a treasure card from your deck into your hand. Treasure cards double as item cards that give you special abilities when played from your hand instead of winning them and putting them away in your chest.

Every Captain also has an opportunity to play items from their hand that might increase the strength of their played crew. Tally the score and the Captain with the highest crew value wins the lowest numbered card in the encounter. Repeat these steps for the next card (now with one less card in your hand) until all encounter cards are awarded. I should note that ties cause that card to be discarded – no one wins it! 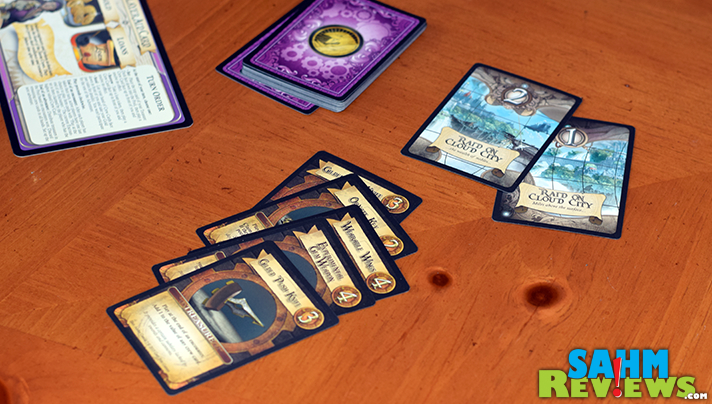 Now you reset the encounter and do it all over again until one Captain has no more treasure in their deck. At the end of the encounter, if any Captain has no treasure left, final scores are tallied. Add up the gold value of all treasures won, adding any gold received from stealing and subtracting any funds owed from loans. Add one gold for any treasures left in your deck unplayed, and the pirate with the highest total wins!

Captain’s Wager also includes additional encounter cards that have custom effects which are resolved immediately when a player wins one. Bonus item and crew cards add to the randomness and chaos of a game, while Clan Items give each Captain a starting item in their hand that is unique. Thanks to these included bonus cards, every game is different. There is also a small expansion available that adds an additional 49 cards to the mix once you think you have mastered the base game (and it’s less than 10 bucks!).

Pick up your copy of Captain’s Wager on Amazon for around $20 and be sure to follow Grey Fox Games on Facebook and Twitter to see what they’re currently working on. After playing Captain’s Wager, I think I can permanently retire my Hoyle deck of cards!

18 thoughts on “I’ll Wager You Will Love This Game”