One of the very first card games I taught my daughters was “War“. If I recall correctly, the first one was “Go Fish”, but we quickly outgrew it. War was a game I played as a child against my dad and brother and is one I still go to when we’re looking for a 2-player game with just one deck of cards. The downside to the game is that it really is completely random. There are no decisions to be made – you just play the next card from your pile, and if you tie you battle again until a victor is determined. This goes on until one player has all the cards.

We came across TacDex: Pirates by USAopoly that claimed “TacDex is War like you’ve never played it before”. With War being such a long-time favorite of mine, this looked to become a new classic for us. 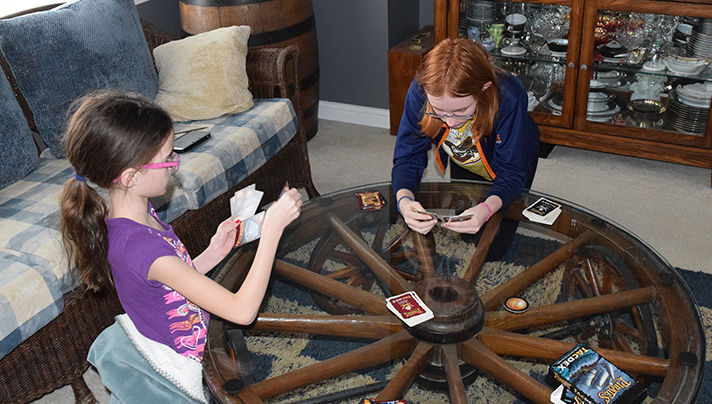 Each player has their own color-coded deck of cards, numbered from one through eleven. Each player is dealt a hand of five from their deck, and on each turn plays one card face-down. Both cards are revealed and the winner of that round collects all played cards and puts them into their collection pile. At the end of the game, the player with the most cards collected is crowned the winner. I suggested the loser walk the plank, but that didn’t go over so well… 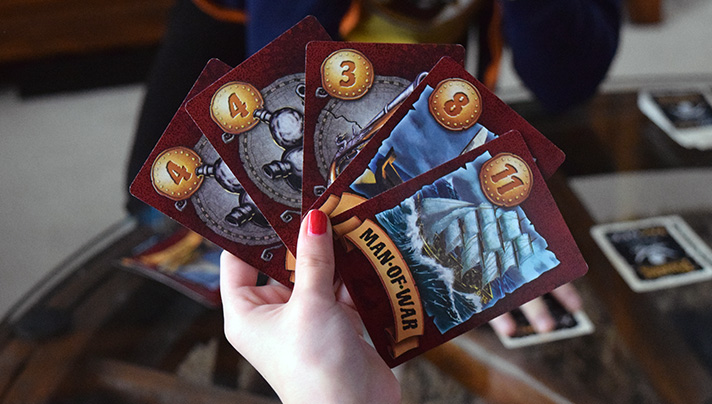 Just like in War, you’re trying to play a card that beats the value of the other person. But there’s a twist in TacDex: Pirates – a coin that is flipped (for various reasons) that changes the goal of the battle from high card to low card (and back).

If you trigger the coin change strategically, you can turn the tide very quickly. If you have a lot of lower-valued cards in your hand, then obviously you’ll want to have “Low” showing on the coin. This coin-flip, and other actions, are triggered by specially-labeled cards in the deck. 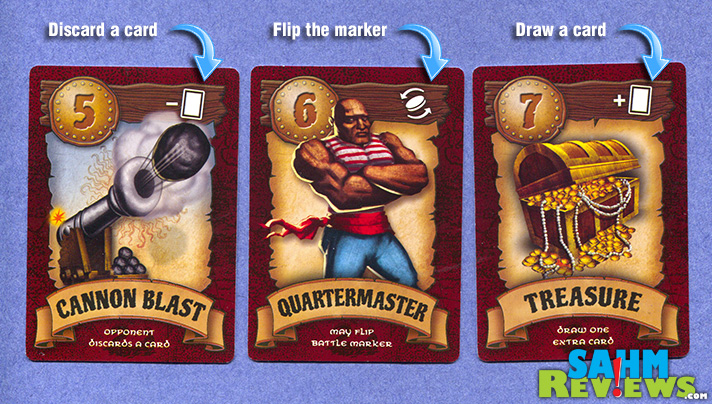 When you play a five, your opponent discards a card from their hand. Play a seven and you get to draw an extra card at the end of your turn. Helpful if your opponent has hit you with 5’s and limited your choices. Play a six and you have the option of flipping the coin once you see what your opponent has played!

A Crow’s Nest card is a powerful tool, allowing to you see your opponent’s played card before you decide which you’re going to play. And be wary of the Kraken – he signals the end of the game. Each player has one Kraken card randomly shuffled into their decks, and when both are revealed, the game ends immediately. This also causes the game to last only 10-15 minutes, while War can go on for an hour or more!

While you are still somewhat hampered by the cards you are dealt, TacDex: Pirates has enough actions that it does put a good bit of strategy into play. When to use your Crow’s Nest, when to flip the coin and when to limit the cards your opponent has all play into your success. This will definitely take the place of War, which now feels boring by comparison.

We’ve seen TacDex: Pirates at our local big-box retailers hanging closely to the board games, usually next to other card and dice options. You’ll also find copies on Amazon for under $12 shipped or direct from USAopoly on their website.

USAopoly just returned from PAX East where they debuted a number of new titles. Be sure to check out their Twitter and Facebook timelines to see what they announced and are releasing in 2015!