Have you ever taken the time to read the ads on top of a gasoline pump while filling up your car? Not the brochures, but the large displays usually advertising the merits of that station’s gas or a photo of fast food to tempt you into the convenience store. Ever think about the elements those signs are exposed to? Beating sun, rain, snow, etc…how do they hold up? That’s one of the miracles of modern co-polymers, the ability to withstand diverse environments without degradation. But you mostly see these products in advertising markets, not in toys. Until now.

Splash Cards by Winning Moves uses this plastic ‘foam’ to produce a deck of cards that can be used in almost any environment. Targeted towards the ‘wet’ crowd, they are perfectly suited (pun intended) for bathtub, shower, hot tub or swimming pool play. Because they’re a regular deck of cards, you can use them to play any standard card game. AND, with the addition of a unique play environment like a pool, it allows you to customize your game in unique ways. Let me show you one example. 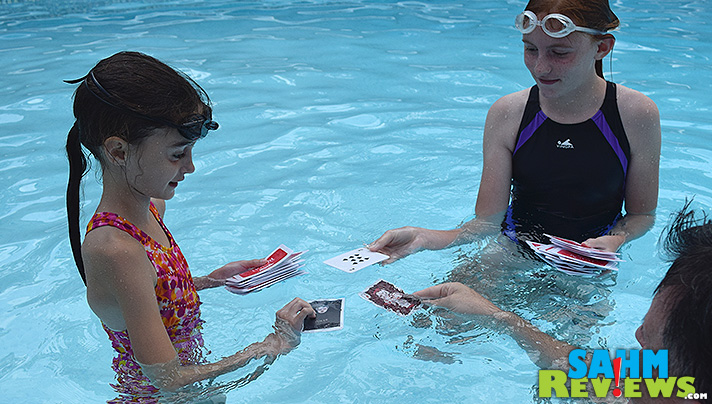 One of our favorite card games to play as a family is War. You know, the simple game where you flip over a card and whomever has the highest wins them all. If there is a tie, then you go to war with each other. Each player deals three face-down cards from their stack to the pot, exclaiming “I”, “de” & “clare” as they lay each one down. 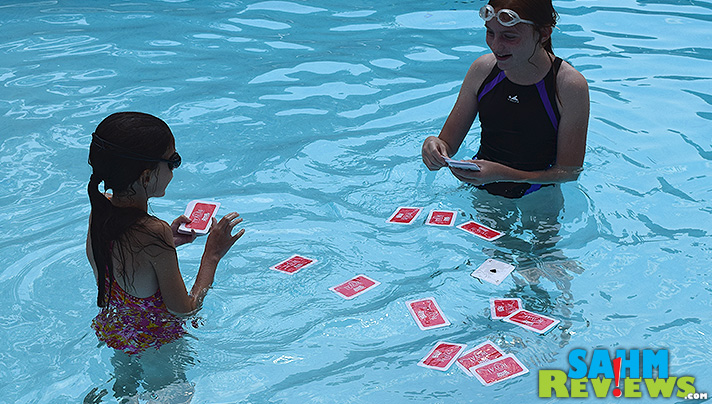 Then the next card is turned face up and “war” is yelled. Again, highest card wins. With the addition of a swimming pool we were able to add some fireworks to the war, slamming down the last card and creating an ‘explosion’! 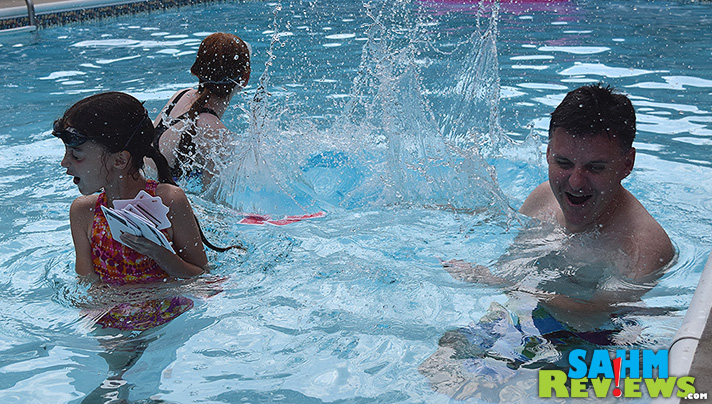 Inevitably when playing war someone gets eliminated well before the other players. At home at a table they (I in this case) would have to sit there and wait until the game was finished in order to play again. Since we were in a pool, I was able to leave the girls to finish up and grab a float to take photos from! 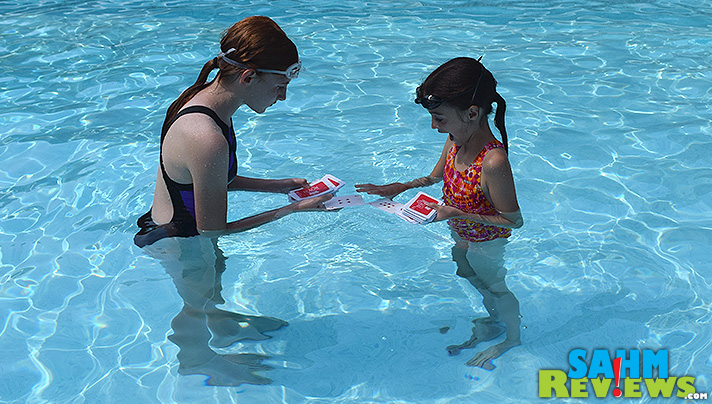 Splash cards comes in an included mesh bag to aid in drying when the day is done. There are a couple things we would like to see changed to make this a perfect gift idea. First, because they are foam with a matte surface, once they get wet they tend to stick together in the water, making simple things like shuffling quite difficult. A clear coating might alleviate some of these issue. In addition, we would have liked to have seen larger graphics on the number/suit side. One of the games we invented included swimming underneath them with goggles on and trying to pick the card you’re looking for – basically a modified version of “Go Fish”. With the natural distortion of the water, the smaller numbers and suits were a little hard to read from below.

But other than these two minor grievances, this is a much better water toy than noodles, sponge balls or dollar squirt guns. Pick up your own deck directly from Winning Moves or from Amazon. There are a couple different designs to choose from and I’m sure will be a splash at your next pool party!

And still in time for the swimming season, you can win a $75 Winning Moves Games gift code right now from SahmReviews.com. You can use it to purchase your own Splash Cards or anything else available on their site! Enter below and tell us where you’ll use the Splash Cards first!

59 thoughts on “Making a Splash with Splash Cards”