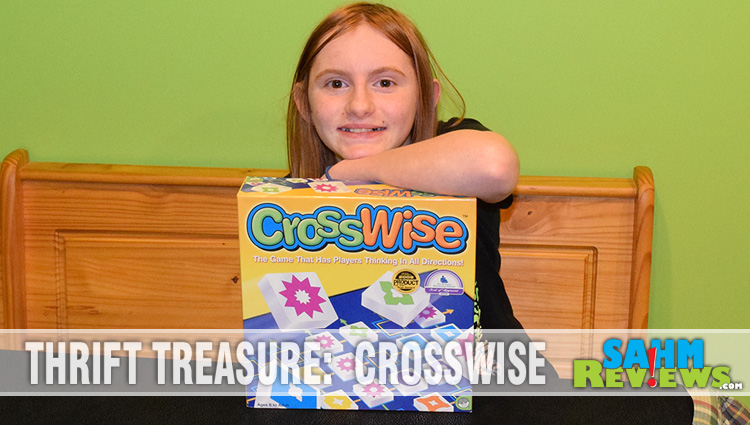 I’m pretty sure I’ve mentioned before that my favorite type of game is what is referred to as an “abstract game”. According to Wikipedia, this type of game is classified by the following:

An abstract strategy game is a strategy game that minimizes luck and does not rely on a theme. Almost all abstract strategy games will conform to the strictest definition of: a gameboard, card, or tile game in which there is no hidden information, no non-deterministic elements (such as shuffled cards or dice rolls), and (usually) two players or teams taking a finite number of alternating turns.

We have some amazing abstract games coming your way in the next month or so, but as luck would have it we happened across one at our local Goodwill that is colorful, simple to learn, and best of all supports four players (two teams of two)! Our copy of CrossWise from MindWare Games only set us back $1.88, but in the couple of weeks that we’ve owned it, we’ve gotten many multiples of value out of it during our game nights.

I also have a soft spot for games with quality components, and CrossWise doesn’t disappoint here either. Every painted tile is made from wood, giving the whole box some serious heft. 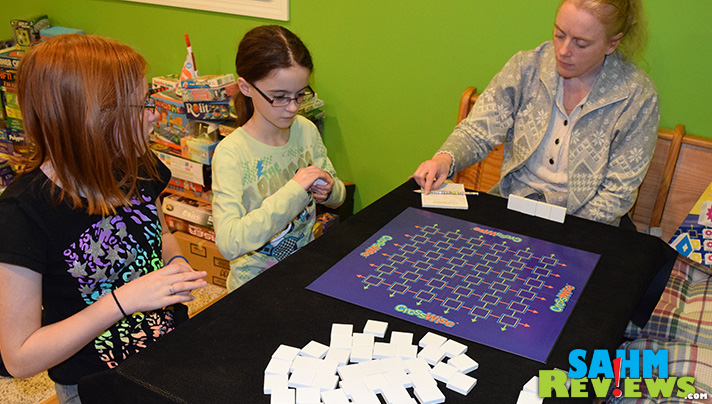 Each person works from a ‘hand’ of four tiles drawn from the pool. Players take turns playing one shape or action tile from their hand to create combinations of same-shape tiles in either their chosen rows or columns. Same-shape tiles don’t have to be next to each other in a row or column to score. There are six different shapes in the game and you receive points at the end of the game if you pair them up, make two or three pairs, manage to arrange 3-, 4-, 5- or 6-of-a-kind, or create a row or column with one of each symbol. 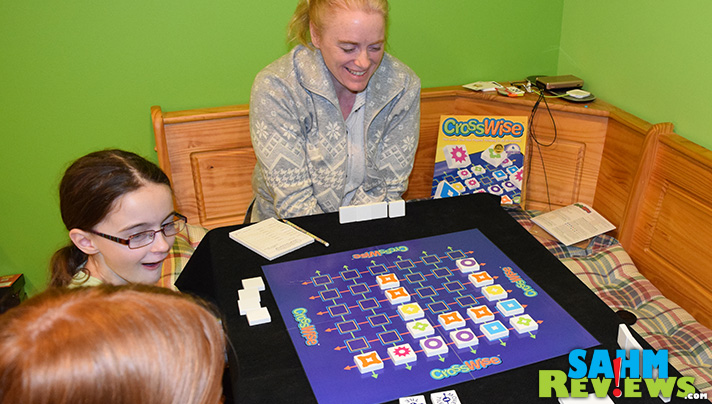 There are also randomly seeded action tiles that allow you to make changes to already-played tiles, ruining any strategy your opponent may have had. One action permits you to move any tile played to any other space. Another allows you to swap the position of any two played tiles. And adding insult to injury, the last one requires you to remove one tile completely from the board and return it to the draw pile!

Play continues until all spaces on the board are filled and then scores are tallied using the included instructions. Because of the number of action tiles, there was no way to assure yourself of winning until nearly the end of the game. The last couple of moves are critical to your success or failure, so we found it best to save an action or two until late in the game.

For the price we don’t think we could have found a better bargain. Originally published in 2008, CrossWise does not appear to be in MindWare’s current catalog.  It was republished in 2011 in Europe by German publisher, Schmidt Spiele. Fortunately you can still find copies here in the U.S. on Amazon for well under $20 with free Prime shipping! Of course keep your eyes open at your local thrift store, you might luck out and find a gem like this!