Over the summer we talked about how many pirate-themed games we had covered and even listed a few we hadn’t. When I penned that post I knew it wouldn’t be the last swashbuckler game I would play, and shortly thereafter we featured a card game by Grey Fox called Captain’s Wager and found one at our local Goodwill that had us assembling very detailed schooners and waging battle against each other. 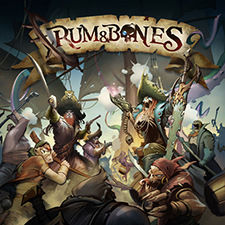 During our local gaming convention we had the opportunity of trying out a brand new issue by Cool Mini or Not, Rum & Bones. You might remember Cool Mini from about this time last year when we showed you their game Rivet Wars and the incredible miniatures that came standard in the game. Rum & Bones takes it up another notch with even more detail to the minis and ship-to-ship battle that hasn’t been done in board game form before.

If you picture some of the great pirate battle scenes from the movies, you’ll remember a lot of sword fighting, boarding the enemy’s ship and even swinging from one ship to another. All of these tactics are represented in Rum & Bones, and is a game less about strategic initiatives or diplomacy, and more about rushing the opponent and chopping each other to pieces. 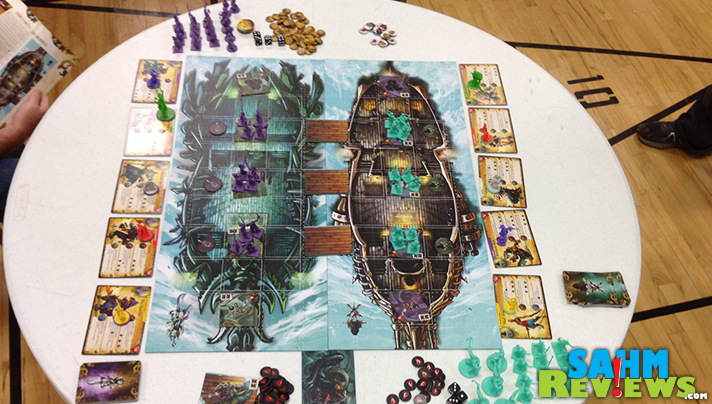 Each player mans a large pirate ship that has pulled up aside an enemy (each other) and is now connected by planks. You field a ‘team’ of 5 hero pirates, three of which are on the ship at any time. You are also given additional crew each turn that you don’t technically control – they just march forward and attack for you. 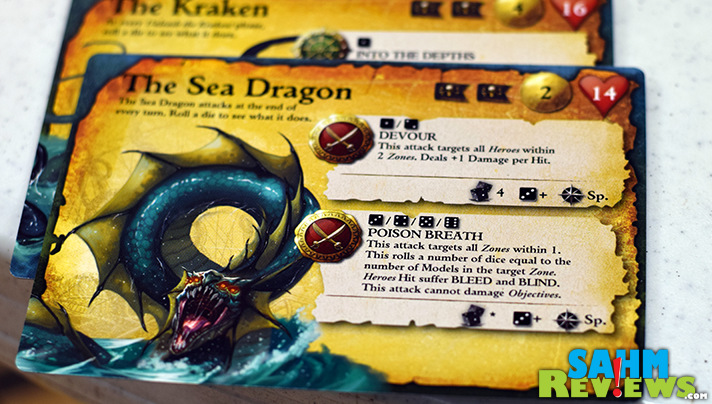 Normally I would go into some detail about how the game is played, but in the case of Rum & Bones that would end up with a dissertation lasting longer than a typical game (30-45 minutes). Even the included instruction book has over 20 full pages of rules and another dozen about the lore. Cool Mini or Not offers a number of instruction videos so you can see it played live (with commentary).

But what really makes Rum & Bones so fun is that this isn’t your typical strategy game. You needn’t spend hours and hours pouring over new tactics, and even if you’ve never played you’ll have success by just attacking and fighting. And there’s plenty of that to go around. On each turn you fire a deck gun, taking out a number of enemies with one shot, deploy new crew & heroes and play/draw new tide cards. 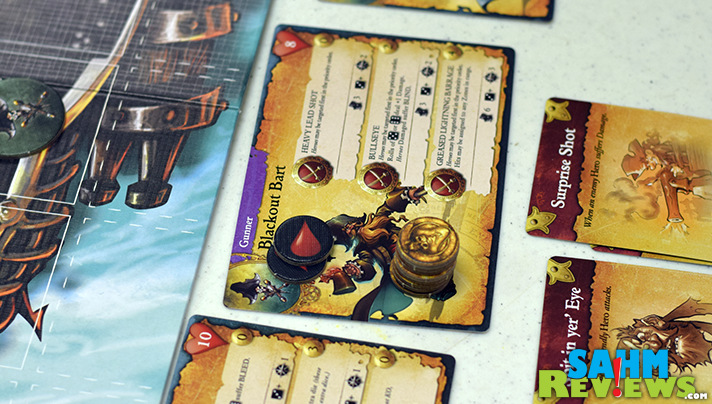 These tide cards give each opponent minor boosts or introduce some variation to the game, and until played you do not know what the other person is holding. Played correctly, they can definitely swing the ‘tide’ of the game one way or another. 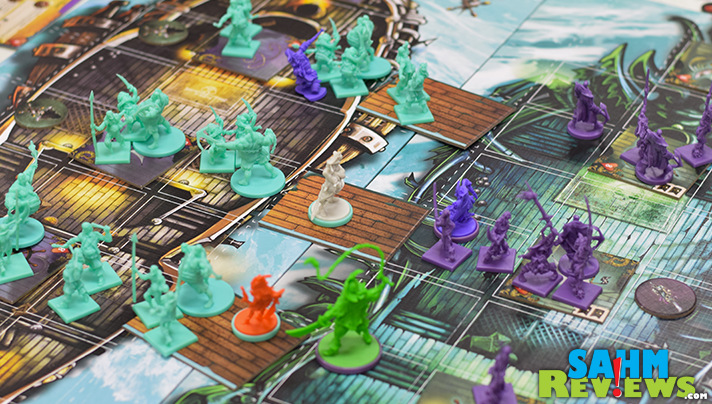 Did I forget to mention the Kraken?! Each round there is a roll of the dice to determine whether or not the Kraken appears. The longer the game runs, the more likely this event will take place. And when it does, you do not want to be caught fighting each other – that is the time for both sides to turn their attention towards killing this 8-legged sea monster before he brings both ships down. 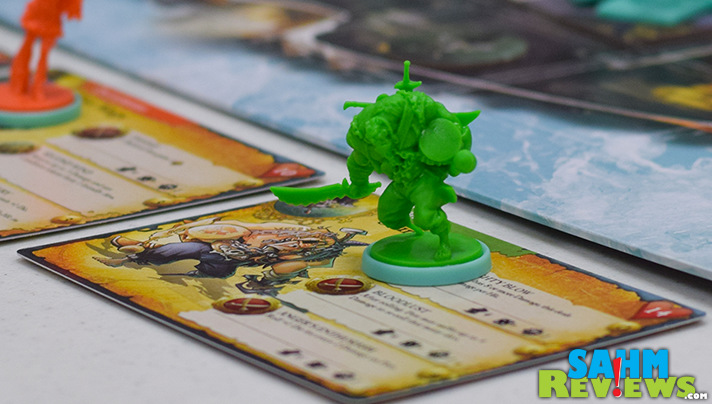 In the base game there are two pirate factions represented: the Wellsport Brotherhood and the Bone Devils. Through expansions you can purchase additional heroes for these factions, as well as choosing a completely different faction. These types of add-ons are always a great way to keep a game from getting boring after multiple plays and gives you more choices when you set up to play. But nicely, these are not needed to have a complete game of Rum & Bones. 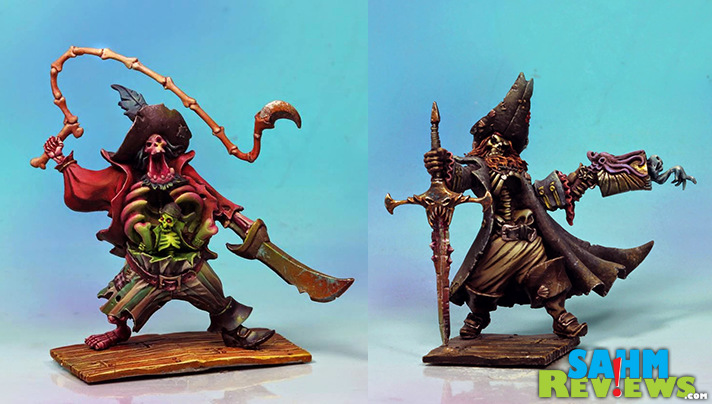 And I won’t even begin to mention the rabbit hole you’ll fall into if you’re the type that likes to paint their miniatures. The detail on these are amazing, and Cool Mini or Not regularly showcases examples of what their customers are able to create using just a brush and some hobby paint. 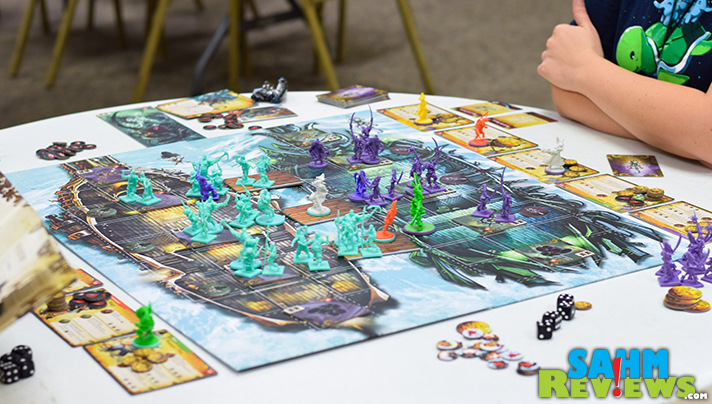 With an MSRP of $100, this isn’t your typical board game price point. Fortunately you can regularly find it available on Amazon for much less. If you were paying attention during the holiday season you could have won a copy for yourself in our 49 Days of Giveaways promotion (congrats Michael B!).

You can probably recognize my excitement for this game. So much so that it was easily one of our choices for “Must Have Hobby Games” this Christmas season. If you’re looking for the ultimate pirate-themed game out there, look no further – Rum & Bones is it. Supporting up to six players in teams and quick round play, this will be our go to head-to-head title for some time to come. That is as long as we can continue to fight off the Kraken.