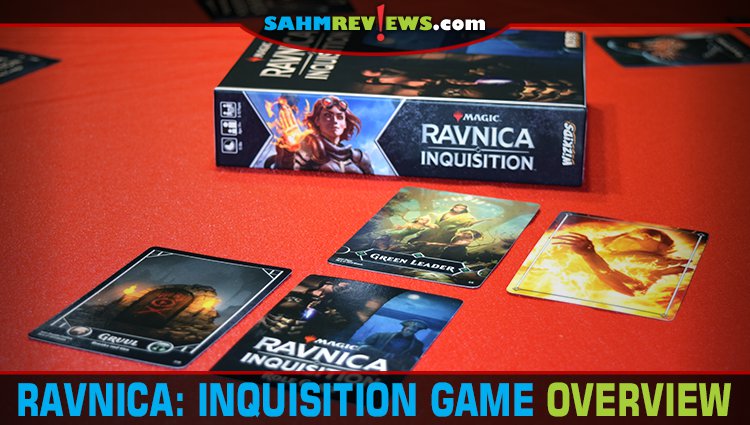 I have a confession to make. I’ve never been able to get into playing Magic the Gathering. I don’t know if there’s a solid reason. Maybe it’s because we don’t have a healthy local location for our girls to play at. Maybe it’s the ongoing costs to enter tournaments. More than likely it’s the fact that you need to continually purchase new decks and packs (or singles) to build your deck. It seems it’s less about playing skill and strategy and more about who can spend the most money.

Please don’t misunderstand – I’m sure the game is fantastic. It has lasted decades during a time when other card battle games measure their popularity in months. I have a lot of friends who play religiously every Friday night and spend as much time researching combinations, searching online for rare and powerful cards and practicing their shuffling techniques. As a family, we gravitate more towards board and card games rather than CCG’s (collectible card games). Last year WizKids introduced a new MtG hidden-role card game, Ravnica: Inquisition, that bridged both of these worlds. 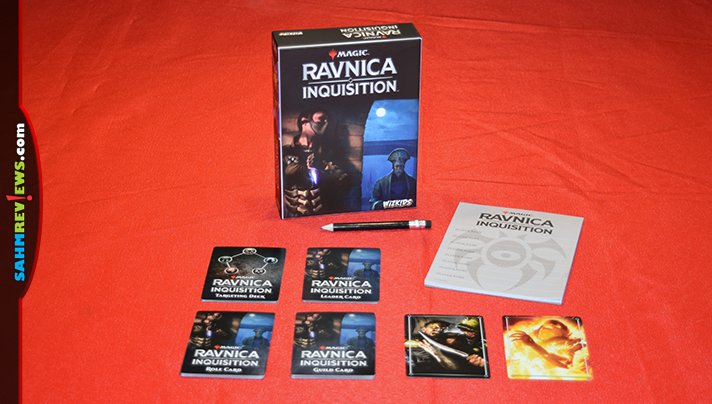 If you’ve ever played any of the Ultimate Werewolf games, the game play of Ravnica: Inquisition will feel familiar to you. You and up to nine other players will be assigned both a guild and a role at the beginning of the game. A little bit of custom setup is required to accommodate various player counts (Ravnica: Inquisition supports 5-10 players). In the end you will be either a Gatewatch Loyalist or an Agent of Bolas. You’ll win or lose as a team, but because everyone’s role is hidden, you don’t know who your team members are. 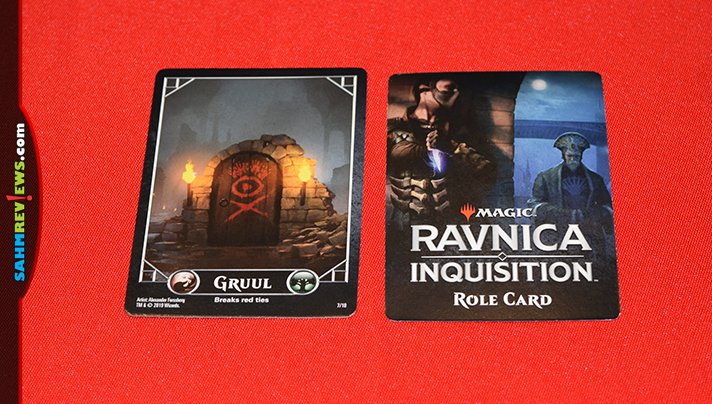 While your role is hidden information, your guild card is turned face-up so everyone can see. These serve to break ties when they occur and don’t offer any other special abilities. A full game of Ravnica: Inquisition is played over five rounds, which is controlled by the deck of five Color Leader cards. After choosing a narrator, all players will close their eyes. Players with the Agent of Bolas role cards will be instructed to open their eyes so they can discover their teammates. Once everyone has opened their eyes back up, the first round begins. 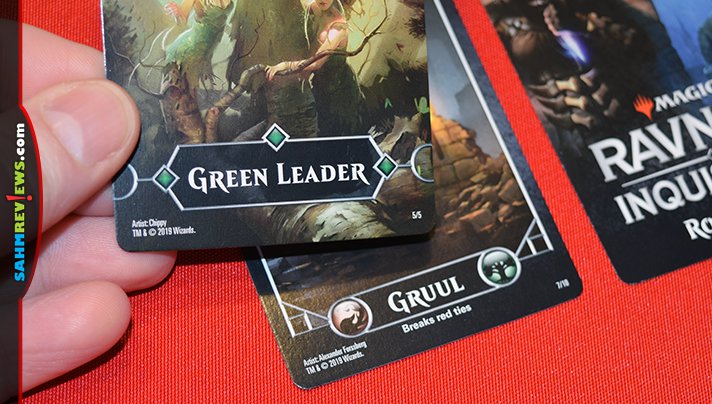 At the beginning of each round one of these Leader cards are turned face-up. The color matches the icons on players’ guild cards, and only the people who have matching colors will be up for vote. Using a smart phone or egg timer, begin a 2-minute timer and discuss who should receive that Leader card. Again, only people who have that color represented on their guild card are eligible for consideration. During the discussion you do not have to be truthful about your role or strategy, so feel free to manipulate the conversation in any manner you see fit. Once the timer has expired, all players will vote at the same time by pointing at the player they wish to elect. The newly elected leader takes the leader card and places it face-up in front of them and performs their color ability.

If a White Leader, they will draw a card from the Targeting deck (Targeting cards also depict one of the five colors). They then choose another player that matches that color and shows their role card to them. If elected as the Blue Leader, a Targeting card is drawn and all other players peek at the role card of the player chosen by the leader. 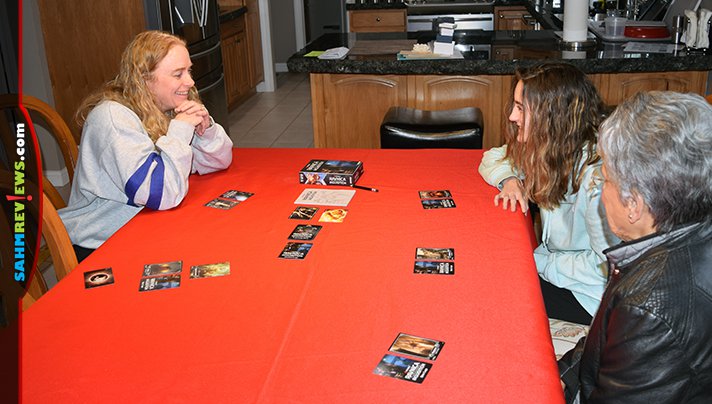 A Black Leader will also use a Targeting card to decide who should receive the Ultimate Price card. This player’s name will be written on the included pad and will die at the end of the final round. The Red Leader similarly draws the last card from the Targeting deck and gives a matching player the Ablaze card, who will also perish at game’s end. Lastly, the Green Leader looks at a chosen player’s face-down cards. 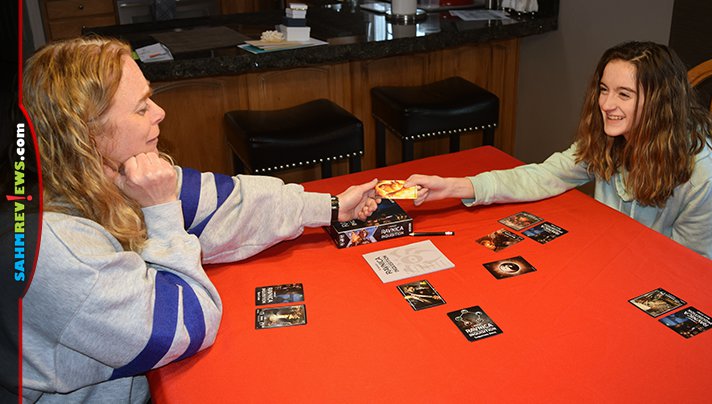 The 5th and final round requires the Red Leader to hand out the Ablaze card before starting a 5-minute discussion round of who the players think should be killed. Only players possessing a Leader card may vote, and the person receiving the most votes dies. All players then reveal their face-down cards and who is still alive is determined. If at least two Agents of Bolas are dead, the Gatewatch Loyalists win. Otherwise, the Agents are the victors!

Ravnica: Inquisition is a solid entry into the world of hidden-role card games. On the downside, there are a couple of rules that need clarification. For instance, what happens when the last Leader Card drawn is the Red Leader? The rules state they activate their ability “before the final round begins”, but the Leader isn’t assigned until the middle of the round and after discussion. Some clarification is in order.

If you’re looking for a non-collectible game set in the Magic the Gathering world, pick up a copy of Ravnica: Inquisition on Amazon or at your favorite local game store. While you may be familiar with WizKids from their Dice Masters or HeroClix games, they have quite a few boxed strategy games on their website. If you’re curious about what they’ll be debuting during this summer’s convention season, make sure you check out their Facebook and Twitter timelines!

What is your favorite hidden-role game?