There are a number of games floating around that have players taking on secret roles and others trying to figure out who they are. We’ve featured a handful such as Ultimate Werewolf, Escape from the Aliens in Outer Space, Bang Dice Game and Deception Murder in Hong Kong while there are many others that we haven’t. The girls are drawn to this genre, perhaps because they thrive on the theatrics. While I enjoy these types of games, my lack of ability to maintain a poker face often works to my disadvantage. My “hidden” role is almost always discovered. 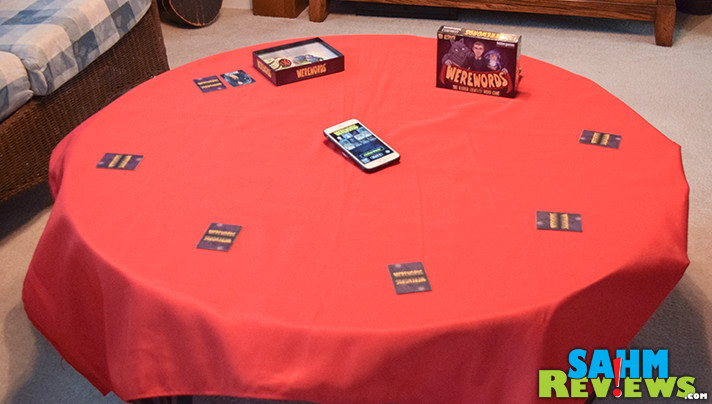 Yes, I enjoy the concept and the thrill of the hunt but I secretly hope that I draw a common role that allows me to lurk yet participate without fear of unveiling my identity. I guess that’s why I have really enjoyed playing Werewords by Bezier Games. The game itself is based in the hidden role genre, but there’s much more to it. The goal is to discover the secret word – then worry about the hidden roles. 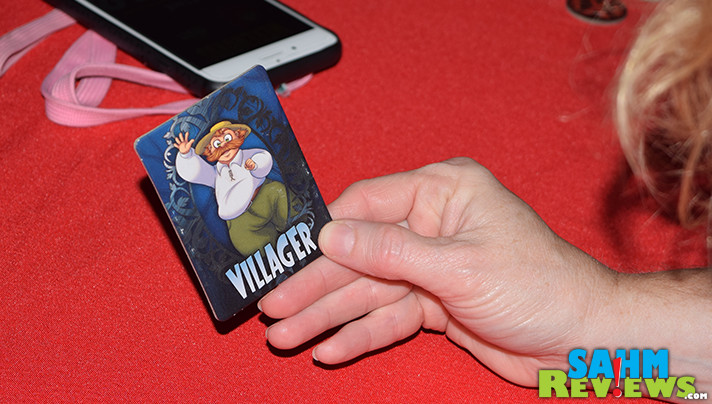 Like its predecessor, Ultimate Werewolf, the village is being bothered by one or more werewolves. The goal of the citizens is to free their community of these creatures that are stalking them in the dark. Instead of hunting and voting on residents, Werewords takes a different approach. If all members of the community can discover the magic word and say it in unison, they can drive the werewolves out of their village for good. 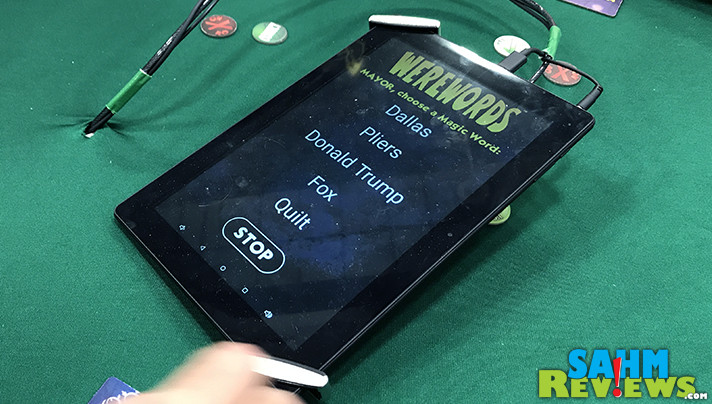 Utilizing the free Werewords app, players walk through the process of preparing the game. At the beginning, all players close their eyes and follow the instructions that include having the Mayor selecting a magic word followed by a Seer learning the word and the werewolves learning it. Only the werewolves know who the other werewolves are but all the other roles are kept secret. 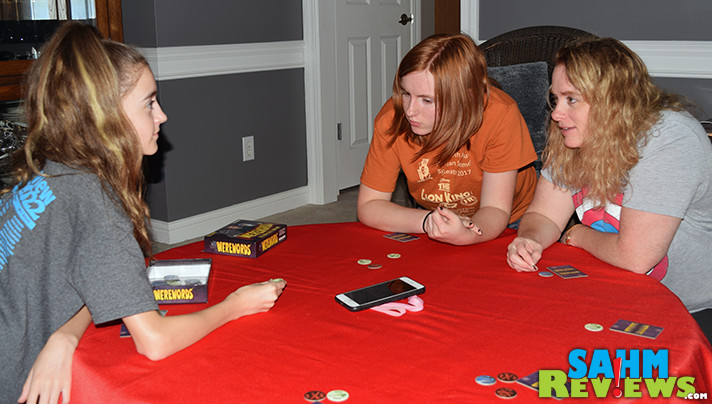 Once the word has been determined, villagers have to quickly figure out the word by asking questions that can be answer by the major with a simple yes or no. Is it a person? Is it a place? Is it a food? They continue asking questions and narrowing do the search as they go. Does it need to be cooked? Is it a fruit? Is it a primary color? All players, including the werewolves and the seers are allowed to ask the questions. The difference is the villagers are trying to genuinely figure it out. The Seer is trying to help them figure it out and the werewolves are trying to distract them. The mayor only has a limited number of responses to distribute so it’s important that players put thought into their questions so they don’t run out! 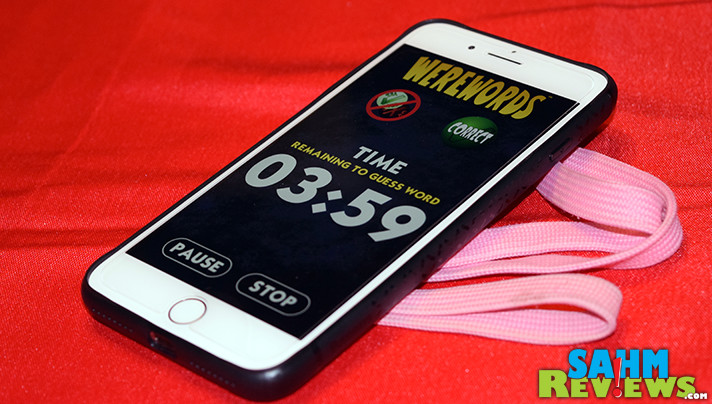 Remember how I said they have to work quickly? That’s because there’s a timer and the villagers have a whopping FOUR minutes to decipher the clues and determine the secret word. If the word hasn’t been guessed and the Mayor runs out of tokens or the timer runs out, then all guessing stops and a voting process begins. If the villagers can figure out who the werewolf is, they win. If they cannot figure it out, the werewolf wins. However, if the magic word is discovered before the timer runs out, the Mayor taps the “correct” button on the app and the werewolf (or wolves) reveal themselves. If the werewolves can guess the Seer among the group, they win. If the werewolves cannot then the villagers win.

Werewords is simple to teach and because of the included app and timer, the game play is very quick. Whenever we play it, we get several rounds in before packing it up. The nice thing is we’re able to incorporate multiple people and individuals can join or leave after each round. During setup, players are able to select the difficulty level of the words that also adjusts (pretty dramatically) how easy or hard it is to decipher the magic word.

Oh, one last thing… the Mayor may secretly be the werewolf! In this case, he may choose to lie about whether the villagers are on the right path or not. But remember… if the group isn’t able to figure out the word then they’ll still get to vote on who they think the werewolf is!

Including setup, role and word selection along with voting, a game of Werewords only lasts about 10 minutes and can accommodate anywhere from 4-10 players ages 8 and up. Usually we acknowledge that an age range is an estimate and having an adult explain the rules will likely provide relief from the age restriction but that’s not really the case here. Not only do participants need to be able to read words, but they’ll also need to understand the nuances and meaning of the words. So while it works for kids as young as 8, Werewords definitely is a more fulfilling game when played with people with a little more life experience under their belt. Players take on a secret role with one person doubling as Mayor. The major knows the magic word and is working to get the villagers to figure it out so they can all say it in unison.

If you enjoy word games or secret role games, Werewords is worth trying. As a bonus, the concept of figuring out a word is something even parents and grandparents might try. Just tell them it’s a new take on Password. You can pick up a copy direct from Bezier Games or grab Werewords on Amazon for around $17. Be sure to stalk their Facebook and Twitter channels to see their other games. We’re especially looking forward to trying out the follow-up to Castles of Mad King Ludwig!

Are you more likely to play a secret role game if it included another aspect such as word discovery?