I still remember the first R-rated movie I saw in the theaters. While my friends were bragging about getting to see Porky’s on the big screen, I went a different route. I was only 11 when the original Alien movie was released, but in 1986 when the sequel, Aliens, came out I was 18 and couldn’t wait to cultivate a lifelong admiration for all things science fiction. Plus you got to see aliens in outer space popping out of people’s chests.

1992 saw the third in the series, and then another five years later they started coming back in Alien: Resurrection. Every single one of these films received my money on the first week of release. I also couldn’t pass on the two Alien vs. Predator movies in the 2000’s, rooting for both sides since I also loved the original Predator movies. I have to admit I missed the latest one, Prometheus (2012), a prequel to them all. Movie time with young kids is usually spent watching something by Pixar.

On Christmas Eve, 20th Century Fox released the trailer for the latest installment in the Alien franchise, Alien: Covenant. Although still more than 130 days until its release, I have already circled the opening weekend on our calendar. A brand new cast will hopefully refresh the story line and set things up for another handful of sequels. I know I cannot wait! 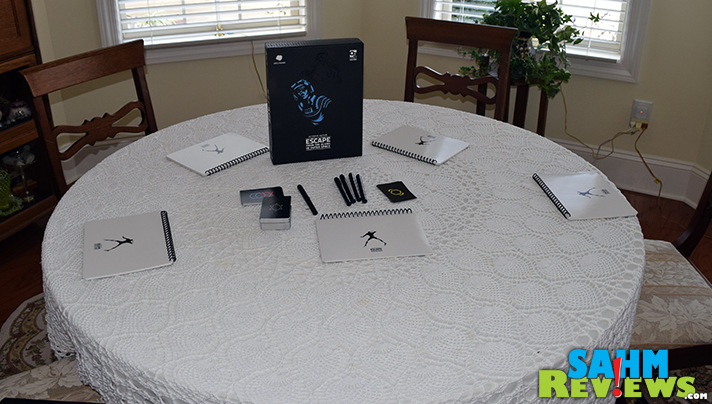 Speaking of Christmas Eve and aliens, by sheer coincidence we had brought along a copy of Osprey Games‘ Escape from the Aliens in Outer Space game for our holiday trip to my mom’s in Alabama. Breaking it out for a couple rounds seemed like the perfect thing to do after watching the movie trailer a half-dozen times!

Escape from the Aliens in Outer Space is a very different type of game than we normally feature on SahmReviews. Not because it is inappropriate or too difficult, but because calling it a “board game” just feels odd. There are no boards, no dice, no spinners – nothing you typically see in what we all know as board games. In Escape, you’ll only find eight dry erase pens, three sets of cards, eight map books and a couple cleaning cloths. What you’ll need to provide is imagination and a sense of urgency. 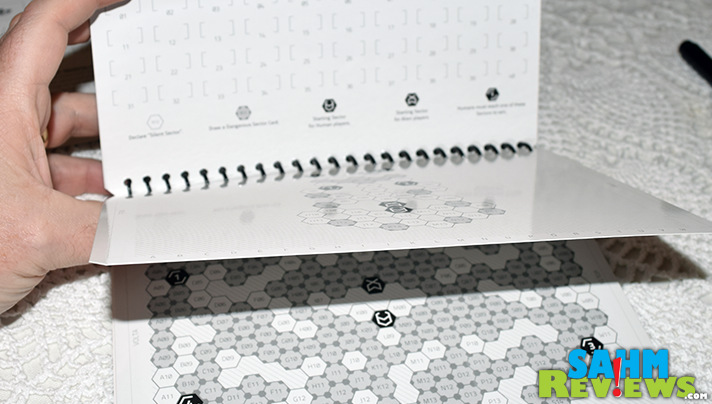 I believe Escape from the Aliens in Outer Space is best described as a hidden role game meets Marco Polo (the swimming game). The premise is you and your friends are on a space station trying to develop a cure for a deadly virus that has swept across the Earth. There have been promising results using alien spores implanted into the brains of infected patients, but something has gone terribly wrong (as it always does) and it is turning these souls into aliens. Now you must escape the space station before being found by one of the aliens. 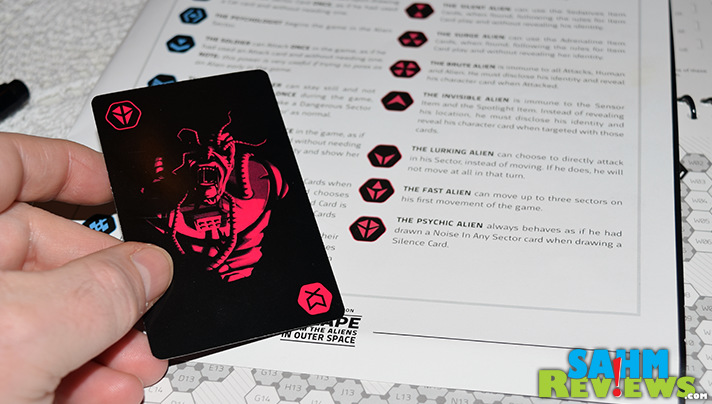 Half of the players will play as humans, while the other half takes on the role of an alien. This is decided randomly via the deck of Character Cards, with each one also giving you a custom role and abilities. You keep your identity secret to either be able to escape without detection or to zero in on the humans without them knowing you are on the prowl. 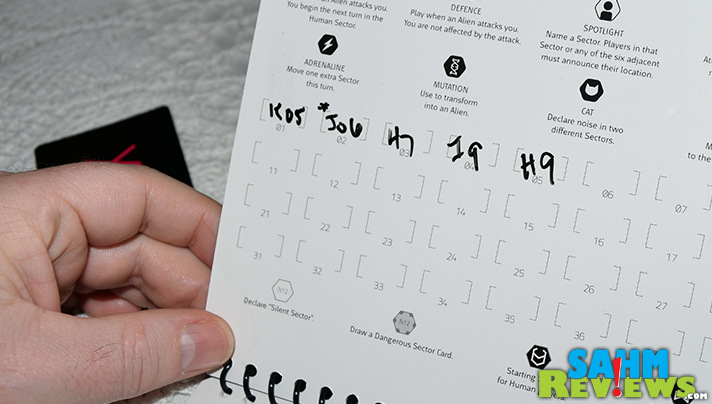 Each player has their own map book and dry erase pen to mark their movement across the map (there are a total of eight different maps included in Escape from the Aliens in Outer Space, all of varying difficulty and player counts). On your turn you make note of the space you are moving into (one space for humans, up to two spaces for aliens), and if a “Dangerous Sector” as dictated by the map, draw a card from the Dangerous Sector Card pile.  These might give you additional items to use during your escape, alert you to noise in your sector or possibly be of no use at all (complete silence).

If playing as an alien, you can forego drawing a card to attack the sector you are in, killing anyone who is in the same spot, including other aliens. Both factions are working as a team, even if they do not know who the other humans/aliens are, nor their locations. So killing a member of your own side is obviously a very bad idea, albeit extremely hilarious. 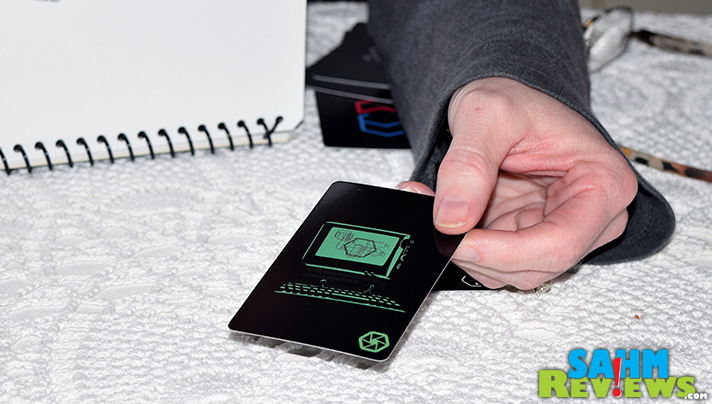 As the game progresses and players begin to utilize their unique abilities (and attack players), you will soon determine exactly who is on your side and who isn’t. The humans are making their way to one of the four escape pods, but reaching one doesn’t guarantee your successful escape. A card is drawn from the Escape Pod deck to determine if the pod is operational or damaged. If good, you successfully escape. If damaged, well, time to find another way out! Did I mention each pod only carries one human? Hopefully the one your teammate escapes in isn’t the one you were headed for!

In Escape from the Aliens in Outer Space there is the possibility of multiple winners. Any human which escapes is a winner. If the alien team kills the last human on the ship (even if others escapes), they also win. Any human that is killed restarts as an alien, making the job of the humans even harder due to the lopsided team numbers. There is also a maximum of 40 turns per game, so if you haven’t escaped by that point, consider yourself alien food. 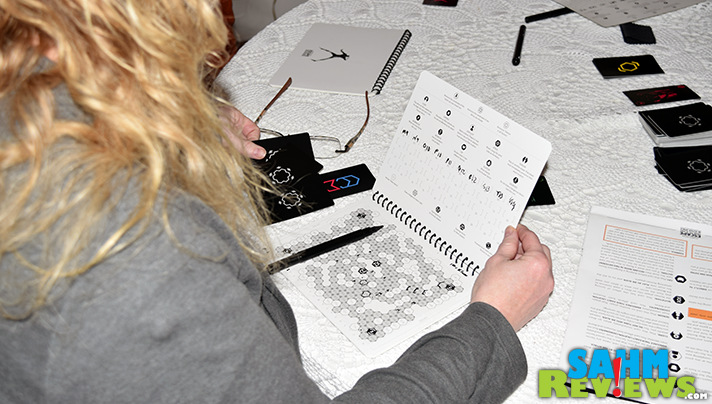 Escape from the Aliens in Outer Space is an extremely fun (and “nerve-wracking” as Nicole put it – she was the last human alive) game of cat-and-mouse. Not knowing where any of the other players are, who they are or what equipment they have found to use against you really puts you in the theme of being in a darkened space station not being able to see the hand in front of your face.

And a bonus, Escape from the Aliens in Outer Space supports up to eight players! There’s such a dearth of good games that support larger numbers without having to stick a plastic object in your mouth or getting hit with a pie to the face. If you like game that incorporate imaginative play, you’ll want to have Escape from the Aliens in Outer Space in your collection. Well worth the under $40 price on Amazon, and we see great opportunity for expansions or fan-created maps. Watch Osprey Games‘ Facebook and Twitter timelines to see when/if it happens!

Were/are you a fan of the Alien movie series?