Last Friday at our game meet-up while some of us were standing around chatting before leaving, I asked why a friend’s wife hadn’t visited lately. We’ve heard her say that by the time she shows up (which is usually late) most of us are already involved in games. There’s some truth to that, but my immediate reaction to his reply was “There are some nights I don’t play ANY games.” Everyone in the conversation agreed and said it’s not just about playing games, it’s an opportunity to be social.

As an example, two weeks ago I taught a group of 8 people how to play Escape from the Aliens from Outer Space then hung around to answer questions as they arose. Then I spent some time chatting with another gamer. Last week I played one game then sat around chatting with another mom discussing how busy our kids’ schedules are. It got me thinking that maybe I need to tote along more 2-player games so I can do this one-on-one socializing over a game while also ensuring we have a game to include people who show up late. 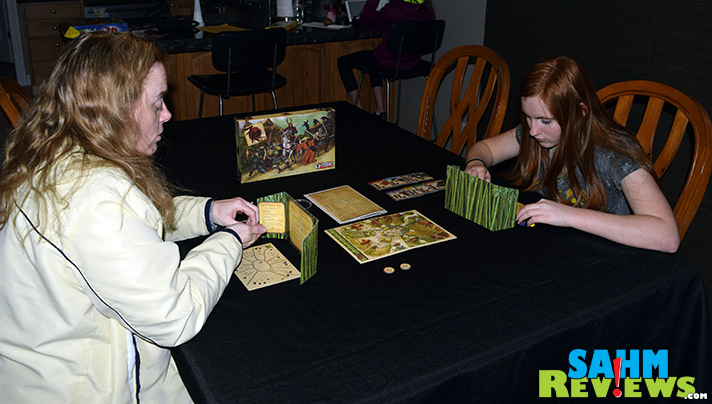 One example of a rich two person game is 7 Ronin from Grey Fox Games. To understand the game, you need to have a grasp of the story. Every year ninjas come down from the mountains to pillage a village in preparation for the upcoming brutal winter. There wasn’t much the villagers could do against this band of warriors. Then one year, the villagers decided enough was enough, gathered their gold together and hired 7 Ronin to protect the yield of their harvest and hard work. Each has a unique skill set with special abilities that will aid in their individual battles.

The game takes place after that… with one player taking on the role of the ninjas and the other the 7 Ronin defending the village. It takes place over a maximum of eight rounds, each representing a timeline drawing nearer to winter. If at any time prior to that, the ninjas are occupy enough of the village, it is considered overrun and they can return to their safe haven with all the goods acquired in the village. (The attacker can claim the win.) On the 8th round, the snowfall is getting so bad the ninjas can no longer fight, causing them to retreat before their passageway is completely blocked. (The defender is the victor.) 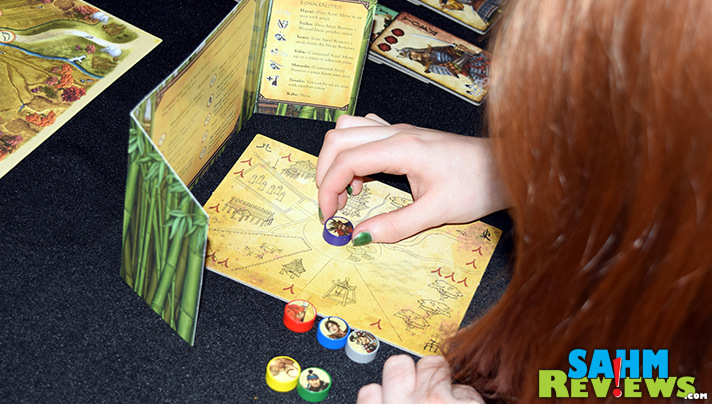 Every round involves three phases, all with steps within. The first is the Planning Phase where opponents work behind a secrecy panel to determine where they will deploy their forces. The Attacker is limited by how many ninjas can attack the village at any given time, as displayed on the Time Track. The village contains 10 different areas, each with their own benefits. The Attacker secretly plans how many ninjas to deploy to which areas of the village. 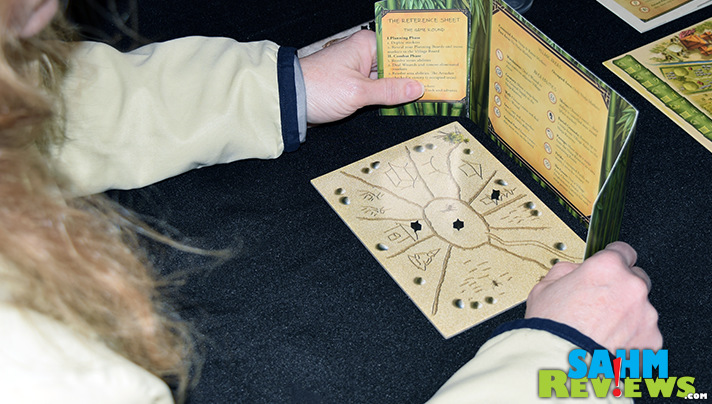 Simultaneously, the Defender is calculating their own moves. There are a number of options and bonuses that can occur depending on placement on both sides so it is important to refer to the cheat sheet on the back of the player’s screen. Some Ronin are more efficient, some can work together and some have the abilities to heal others but not all abilities can be activated every round so planning is more than just plopping them onto a random section of the village! Once both players have completed this step, the privacy screens are removed and all characters are moved onto the village board. 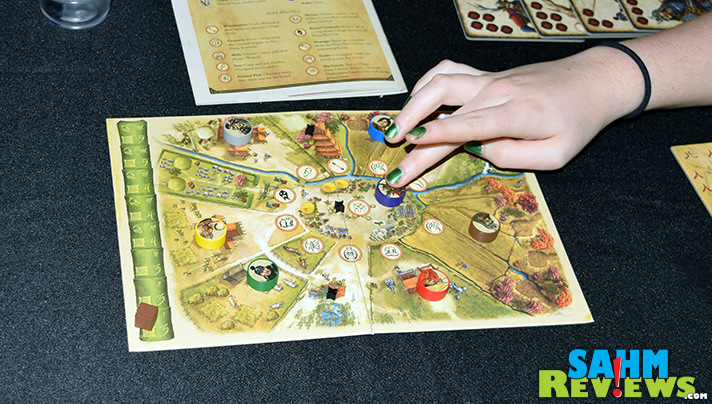 This is where things start to get sticky. The first part of the Combat phase involves resolving all the Ronin abilities. At this point, the ninja locations have been revealed which will allow the Defender to utilize the special abilities of the Ronin in any order they choose to be the most effective. This is the only time during the combat phase that the Defender can employ these abilities. 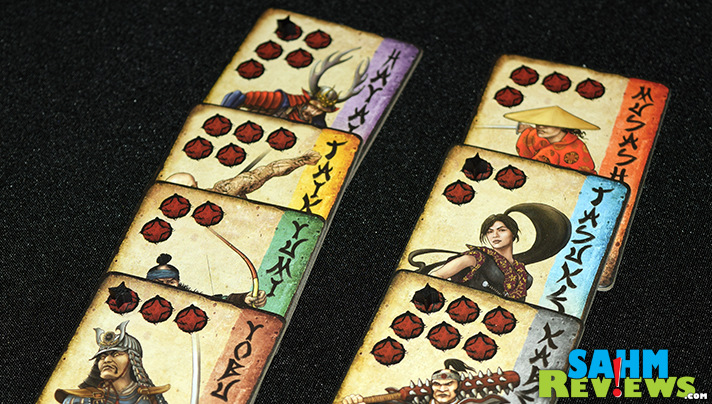 If an area contains both a Ronin and a Ninja, all the Ninja markers are transferred onto the individual Ronin character cards, indicating the amount of damage they took. When a Ronin’s vitality spaces are all covered by wounds, they are eliminated from the game. Once all the Ronin battles have been resolved, the Attacker is allowed to activate the special abilities of each section of the village where they have ninja remaining. The Attacker surveys the board and if they occupy (uncontested) 5 sections of the village at the end of a combat phase, they claim victory. If they do not meet the victory terms, the opponents move on to the End Phase.

The End Phase simply involves resetting the board for the next round. Ronin markers are removed from the board and the Time Track is adjusted indicating moving closer to the looming winter. Then the players return to the planning phase of the next round. 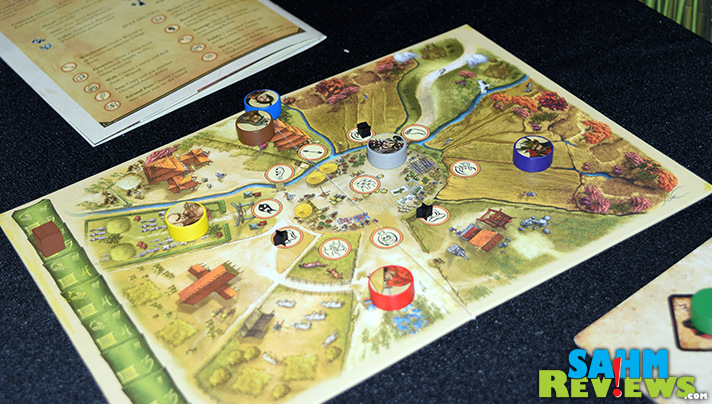 This repeats until one player is able to claim victory as described above. But here’s the thing… this isn’t as simple as it sounds. There is a lot happening when you factor in the various special abilities. There are limited number of ninjas so the Attacker has to plan accordingly. Likewise, the Ronin have limited vitality so utilizing their abilities effectively is key. Despite all this activity, games are typically only 15-30 minutes.

There are still a couple days left to win a copy of 7 Ronin in our Mega Giveaway. Of course, you can find 7 Ronin on Amazon or pick up a copy direct from Grey Fox Games. Either way, check out the variety of other games in their lineup to see what else would work with your group. We hear they just wrapped up a Kickstarter so keep up with all the news and announcements by following their feeds on Facebook and Twitter.

Whether you are gathering with the group to socialize or play games, there’s always room for a quick 2-player game. Do you enjoy these types of one-on-one strategy games or do you prefer more opponents?

5 thoughts on “7 Ronin Board Game Overview”